Manchester United started the 2017/18 season in scintillating attacking form, scoring four times in six of their first ten fixtures. But the Red Devils's river of goals has begun to run dry in recent weeks following a 0-0 draw with Liverpool at Anfield and a shock 2-1 defeat to Huddersfield Town.

Meanwhile, rivals Manchester City continue to thrill with their dynamic and fluid attacking style, racing to a eight-point lead at the top of the Premier League and outscoring José Mourinho's side by 15 goals with only 11 games played.

Although they improved their attacking potency with the £75million addition of Romelu Lukaku over the summer, United are still undoubtedly behind Pep Guardiola's City when it comes to offensive firepower in a season when the title looks like being won by the best attack.

But, according to reports, Mourinho has identified the man he feels can help close the gap to City when it comes to creativity and cutting edge: Valencia midfielder Carlos Soler.

The Independent claim Mourinho has made Soler his top January target, and that United readying a bid for the Spain under-21 international, hopeful of concluding a deal ahead of the summer transfer window in order to avoid being drawn into a bidding war.

Soler's current Valencia contract contains a €75million release clause, but, according to The Sun, the Red Devils believe an agreement can be reached for a fee in the region of £30million, while The Independent set the youngster's value at around £40million.

A product of Valencia's academy, the 20-year-old creator made his senior debut last season and has since gone on to establish himself as a fixture of Los Che‘s starting line-up, helping the sleeping giant of a club storm to second place in La Liga this term under the auspices of new manager Marcelino.

Although he initially started his footballing life as a striker, Soler moved back into midfield as he progressed through the Spanish side's youth ranks, and has started all 11 of Valencia's league games this season, operating from the right flank in Marcelino's preferred 4-4-2 formation.

Soler's potential and burgeoning reputation in Spain is evidenced by the fact that some are labelling him “the new David Silva”, due to a stylistic resemblance to the one-time Mestalla favourite who has starred for Manchester City since 2010.

With one goal – scored in a 2-2 draw with Real Madrid at the Bernabéu in August – and four assists to his name, Soler is showing that he can be a decisive force in the final third, cable of unlocking stubborn defences with his vision, dribbling and ability to slide defence-splitting through-balls to create chances for team-mates.

This is precisely what United need right now. Mourinho was open about his desire to sign a winger over the summer but the 20-time champions of England were unable to secure Ivan Perišić from Inter Milan. Soler's ability to not only play wide, but also in a central midfield position, would be of huge benefit to the Red Devils, who have lacked creativity in both areas recently.

Mourinho has tended to line up with Juan Mata – a former Valencia man himself – on the right wing in a 4-2-3-1 formation this season. The Spain international is tidy in possession, a hard worker and technically gifted, but he lacks dynamism and always looks to drift inside onto his stronger left foot, taking him into the zone the No.10, usually Henrikh Mkhitaryan, is already occupying.

Having the option of someone not only comfortable cutting inside when the time calls, but also able to attack the opposition's full-back on the outside and deliver crosses into the box, would add a whole new dimension to United's attack, combatting the deep, narrow defences they regularly face. 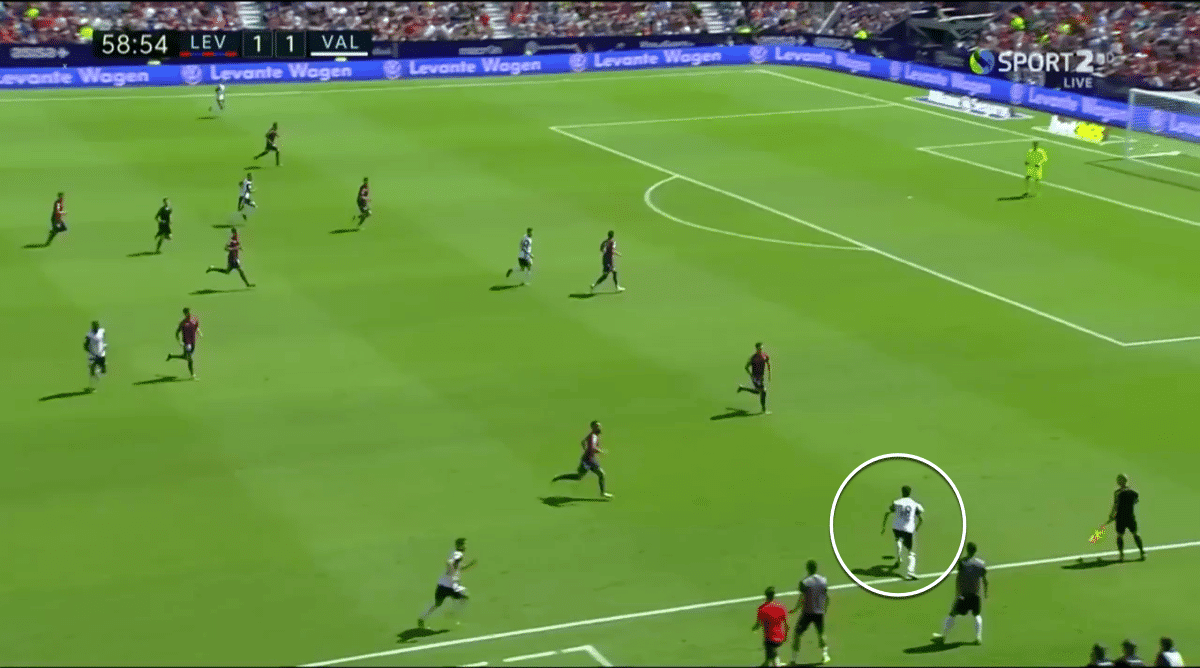 In the above image, we see Soler receive the ball in a wide position, right up against the touchline, faced by two opponents cutting off the inside and with no central passing options. 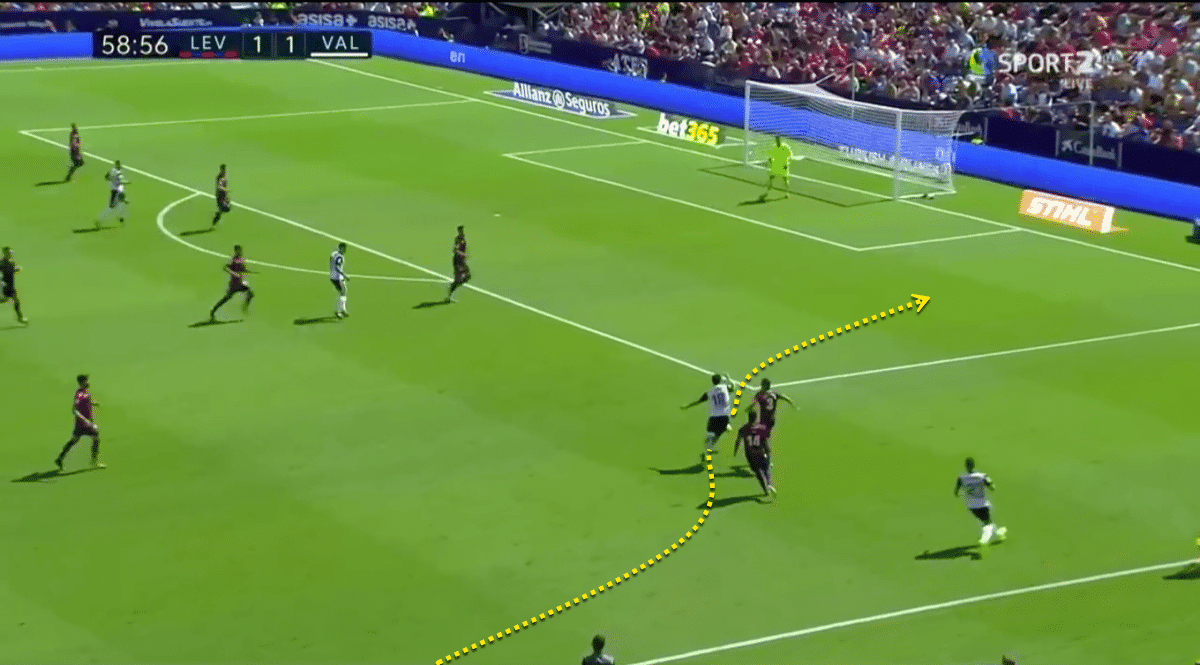 He decides to take on the two Levante defenders, beating both with a combination of pace, close control and savvy movement as he breaks towards the penalty area. 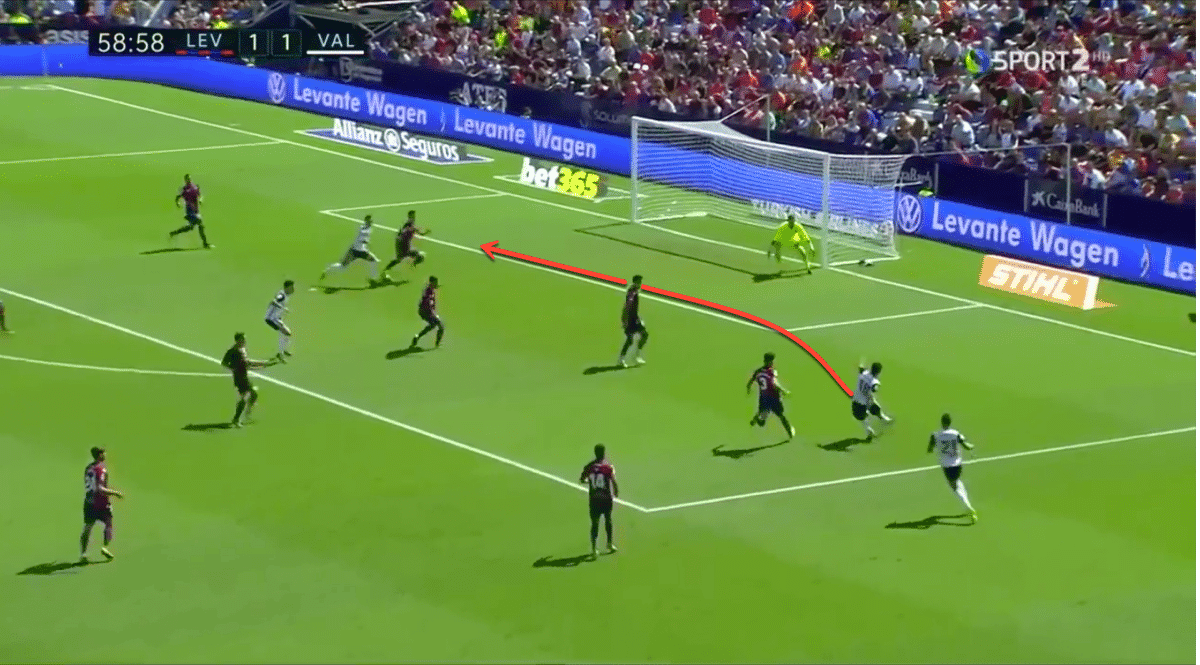 He then whips an inviting low ball across the front of the six-yard box – the kind of delivery that a striker such as Lukaku would thrive on.

Perhaps the area where Soler would be of most value to United, however, is in a deeper, more central role. Last season, Mourinho often utilised a 4-3-3 formation, with Paul Pogba the main creative force from his position on the left of the trio.

Playing on the right of a three, Soler could make full use of his vision and passing range, while also offering similar ball-progression ability to Pogba thanks to his dribbling skills and speed, allowing United to transition quickly through midfield.

What's more, with Pogba currently out injured, United are bereft of creativity in midfield, with much of the burden falling to Nemanja Matić, who is a defensive midfielder by trade and ill-suited to such duties. Having Soler in the squad would help ease the blow of any period the Red Devils are forced to endure without their £89million superstar. 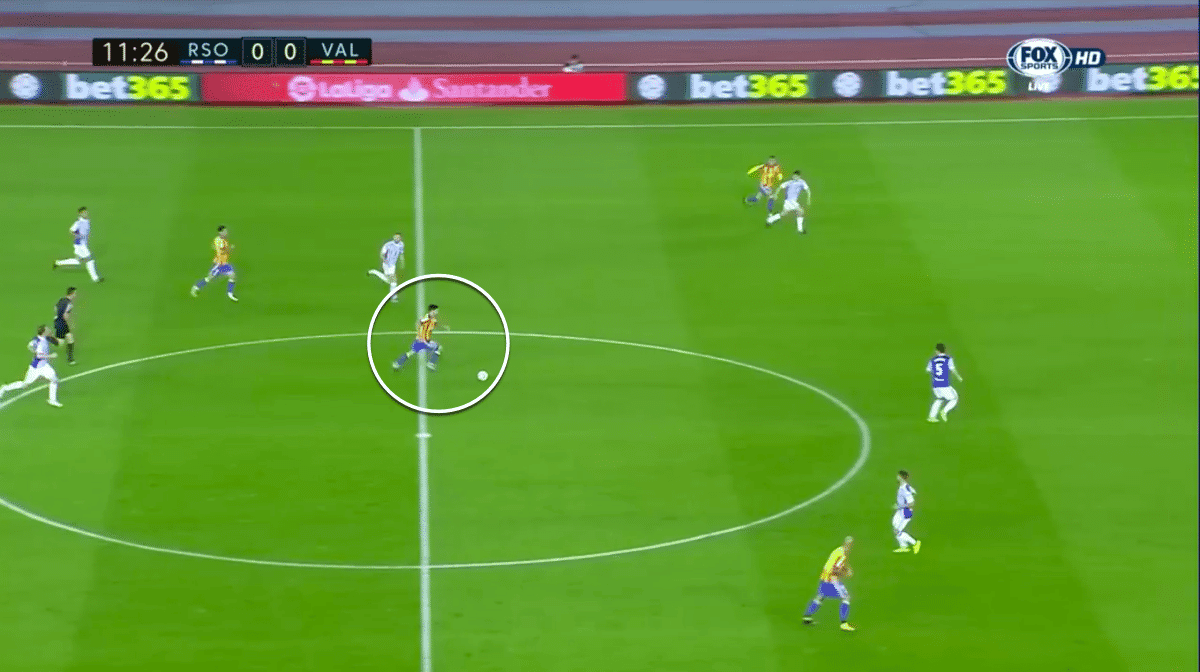 Above, in a game against Real Sociedad, we see what Soler is able to do centrally. He collects the ball in the centre circle and drives his team forward, deep into opposition territory. 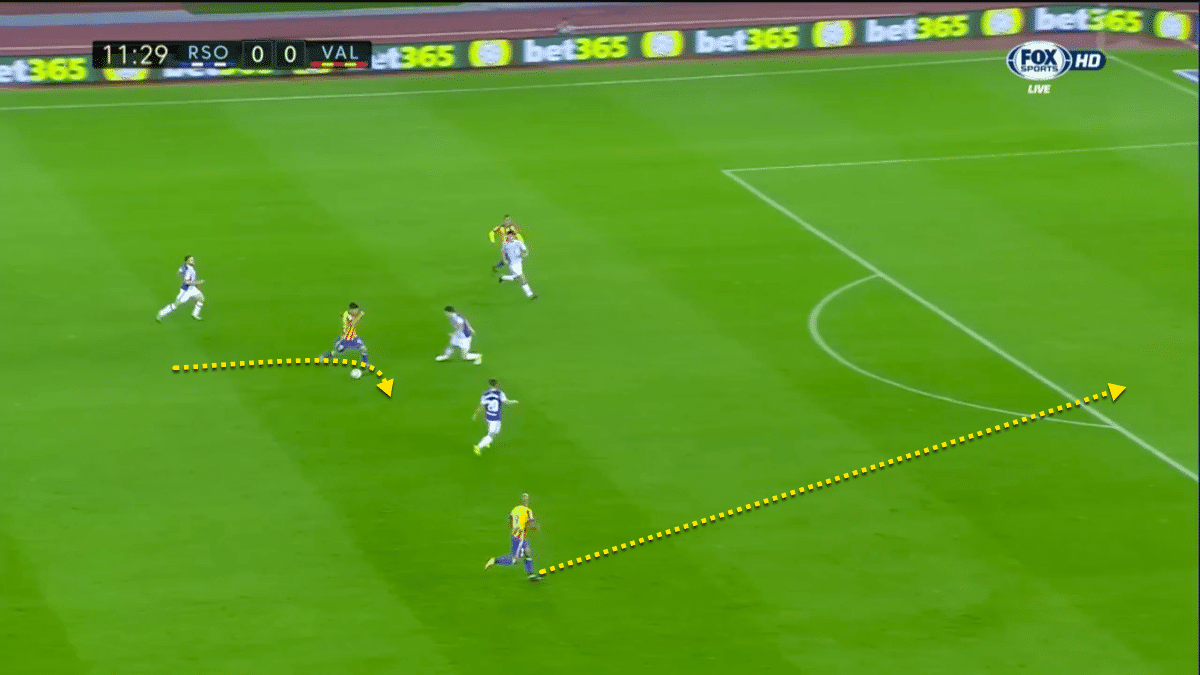 As he reaches the final third, Soler is closed down by an opposition defender. Intelligently, he uses a subtle body-shift, angling off slightly to the right to draw the attention of a second defender and create space for Simone Zaza to break into. 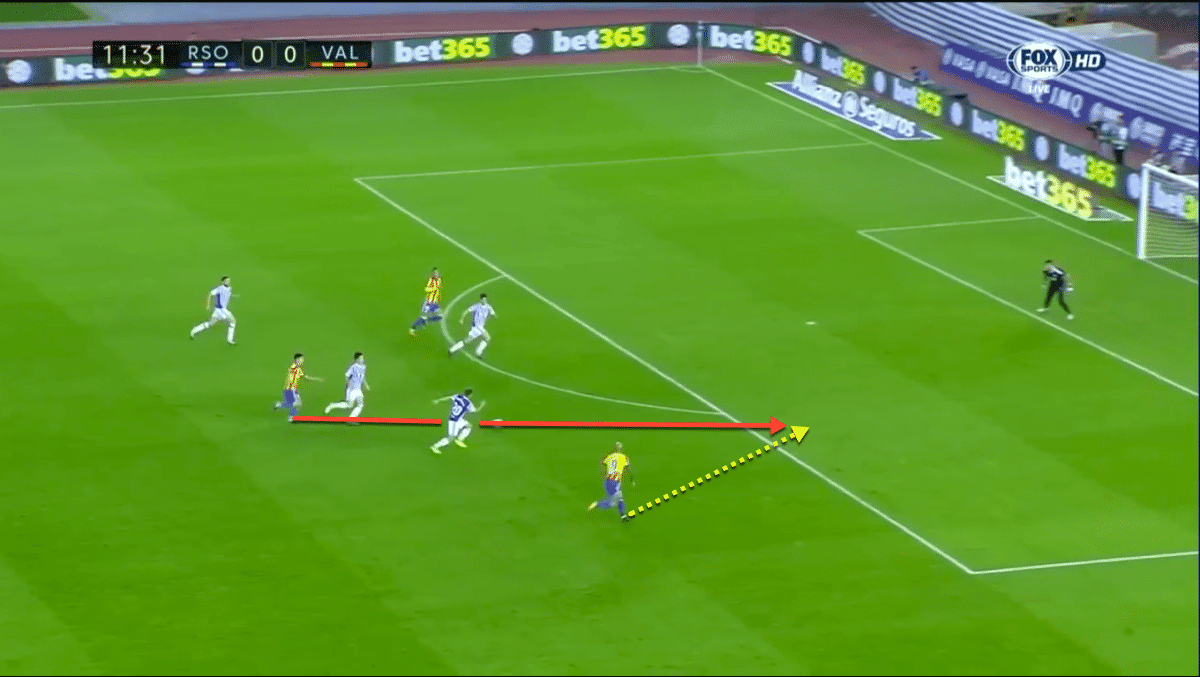 He then releases Zaza with an inch-perfect through-ball, creating a scoring chance for the former Juventus and West Ham United striker. With such powers of creativity, it's easy to see why Soler is being likened to Manchester City‘s Silva.

City's current attacking power is greater than any of their rivals, and by some distance. Guardiola has fostered a degree of structured creativity, offering a canvas upon which the likes of Silva and Kevin De Bruyne can paint with delicate yet expressive strokes.

Signing Soler, however, would give United their own splash of Spanish style. The key to a Renaissance period of thrusting and inventive attacking at Old Trafford.