Liverpool have been blessed with a number of prolific strike partnerships throughout their history, and if Roberto Firmino and Mohamed Salah keep on the way they’re going then their names will be added to that list.

Salah is the one getting all of the plaudits in the media and rightly so. Since the Egyptian's £39million move – a then-club record – he’s not been able to stop scoring. The former Roma man has scored 14 goals from 18 games in all competitions so far, nine of them coming in 11 Premier League starts.

Against Southampton, the one-time Chelsea flop broke a club record set by Robbie Fowler. The ‘Toxteth Terror' bagged eight goals in his first 12 league matches for the club back in 1993 and it had been a record ever since. It was finally broken, though, when Salah raced onto Philippe Coutinho’s pass to fire the ball past Fraser Forster and bag his second of the match.

Liverpool ran out as comfortable 3-0 winners to make it four wins on the bounce in all competitions and three from three in the Premier League since the defeat to Tottenham Hotspur in October.

Roberto Firmino has started all four of those matches since the defeat at Wembley but has added just one goal to his tally for the season, a guided header in the 3-0 win over Huddersfield Town. It was his third in the league and his sixth in all competitions.

He's been unable to add to his three assists, at least not directly, but some are crediting him with an assist for the third against the Saints. Despite this, though, he's been influential in the Reds getting into the swing of things and Salah being involved in six goals in four matches.

On paper it doesn't look like a partnership, with Salah starting off as an inside-forward in all but one of the matches this season. But there's nothing really traditional about Firmino as a striker, is there? So why would the partnership he's involved in be any different.

It's more Batman and Superman joining forces as opposed to Batman and Robin. It's not your stereotypical pairing, but it works. It's one you shouldn't really judge on goals or assists because stats won't paint a picture for the duo.

The Brazilian has never been the most prolific, scoring 21 league goals in two full seasons with the Reds. It's often a criticism levelled at him and you can understand why: his misses have sometimes been costly.

Manager Jürgen Klopp had the opportunity, and the finances, to bring in a prolific forward this summer but opted instead to sign Salah to bolster the attacking ranks and persist with Firmino as the man leading the line.

Klopp's always defended his Brazilian forward in the press and did so recently when asked whether he regretted not bringing in a striker this summer: “We are not crazy. But I'm really happy. We have Roberto Firmino, maybe not 25 goals but ask anyone in the Premier League and they will say ‘What a player'.”

He highlighted Firmino's importance to the team after the 4-2 win over Hoffenheim back in August: “Working hard, everybody speaks about the passing game, but it’s the challenges he makes defensively, chasing them from behind, all over the pitch. They couldn’t get rid of him.”

It's just what he does. He's a nuisance; a facilitator and a wingman. Without Firmino in the team then it's unlikely Salah scores the goals he does against Southampton.

Firmino finished the match at Anfield having attempted 36 passes and completing 72 per cent of them. He won two tackles, completed one dribble and managed to get two of his four shots on target. One of the tackles he makes is key in the build up to the opener. 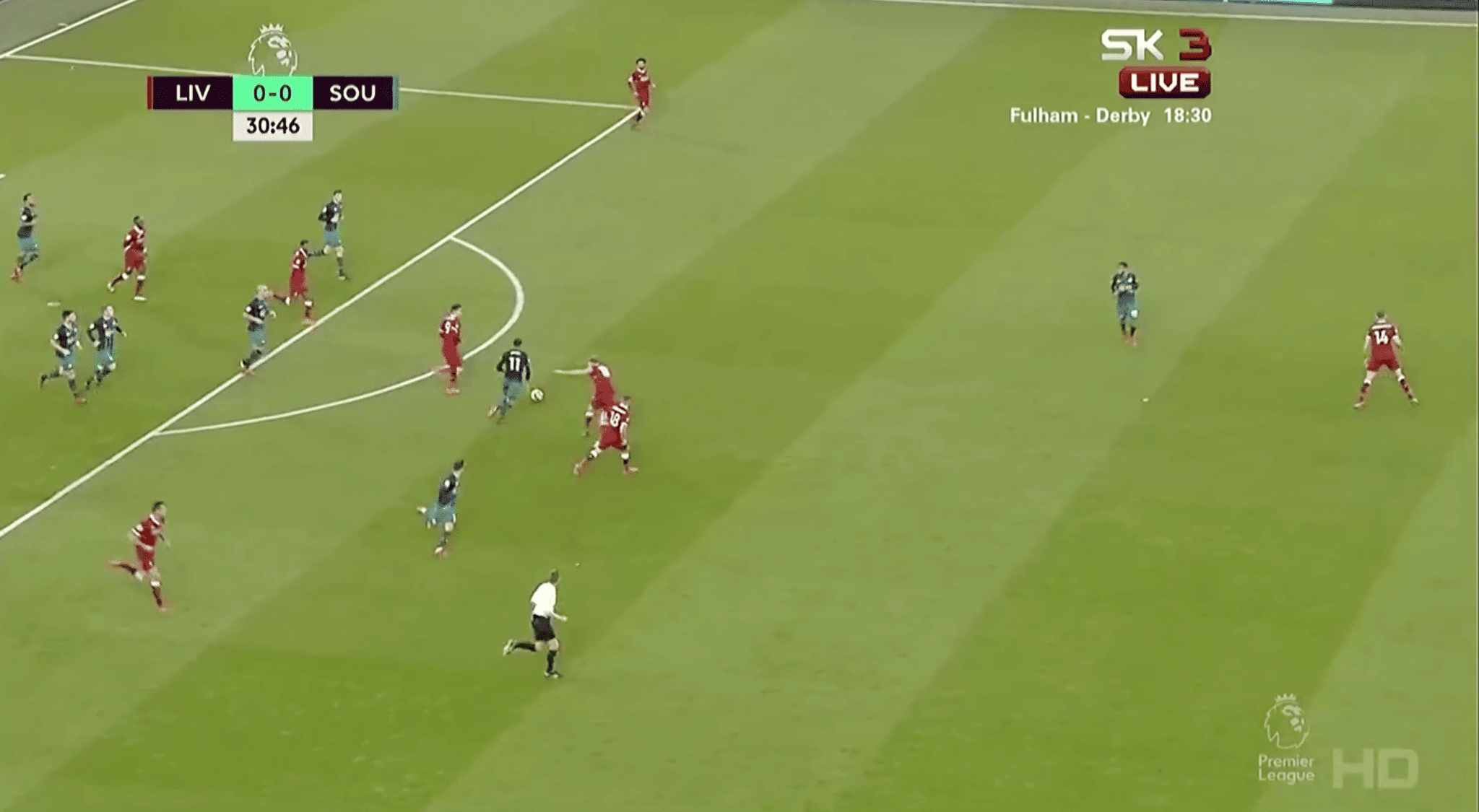 Dušan Tadić, a one-time Liverpool transfer target according to reports, inexplicably looks to dribble his way past three players just outside of his own penalty area.

Alberto Moreno doesn't jump in and Ragnar Klavan manages to stay on his feet, but the Southampton playmaker, as shown in the picture above, works himself into a position to play a pass to Sofiane Boufal, who has Jordan Henderson close by.

But before he's able to play the pass, Firmino gets his body across the Serbian midfielder and dispossesses him. He doesn't just poke the ball away or dive in to give the Saints a free-kick. Instead, he back-heels the ball to Klavan and Liverpool work the ball to Salah, who then cuts inside onto his left foot and curls the ball beyond Forster to break the deadlock.

Firmino is not credited with an assist, but his tackle is just as important as the Gini Wijnaldum pass to Salah. 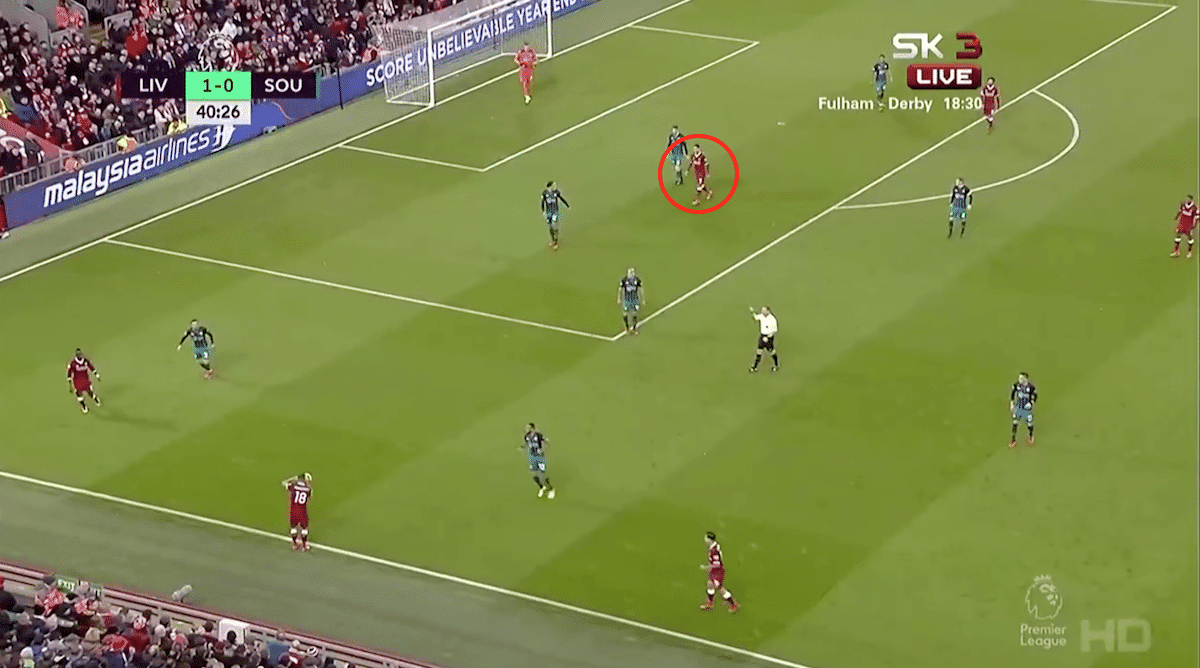 In the picture above you see Firmino, circled red, positioned near Wesley Hoedt as Liverpool take a throw-in deep in the Southampton half. This is in the lead-up to the second goal. 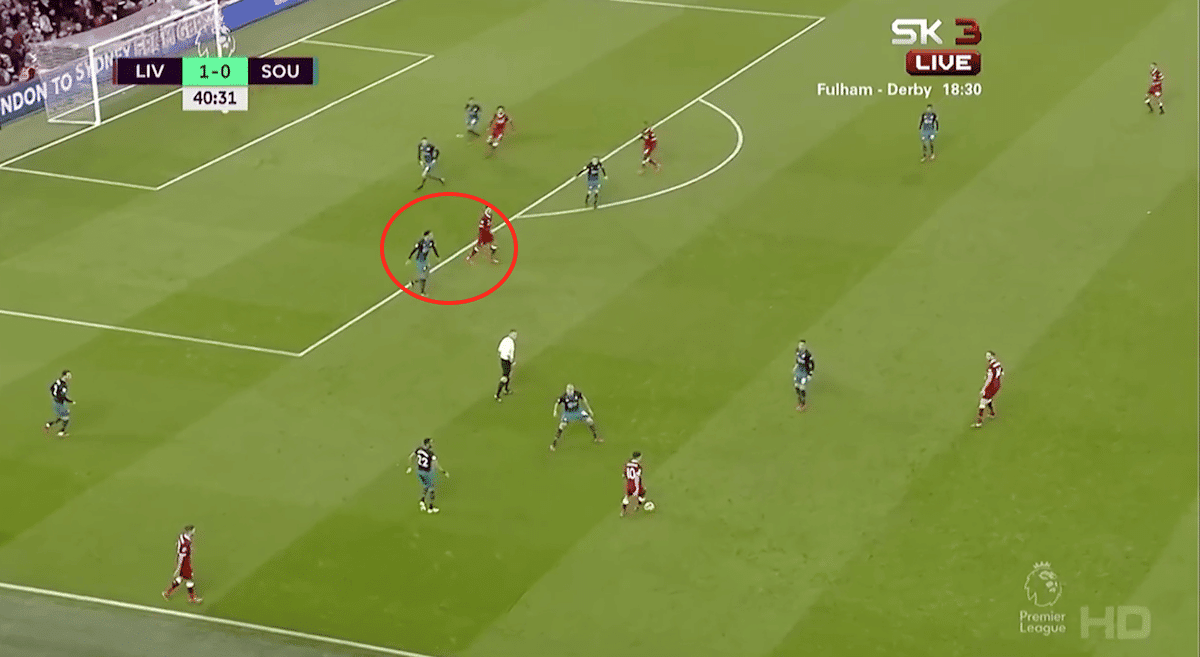 As play progresses and Coutinho picks the ball up in a deeper position, you see, on the edge of the area, Firmino has drifted away from Hoedt and closer to Virgil van Dijk.

The Liverpool No.9 hasn't touched the ball yet but his movement has seen him engage both of the Southampton centre-backs inside of four seconds. 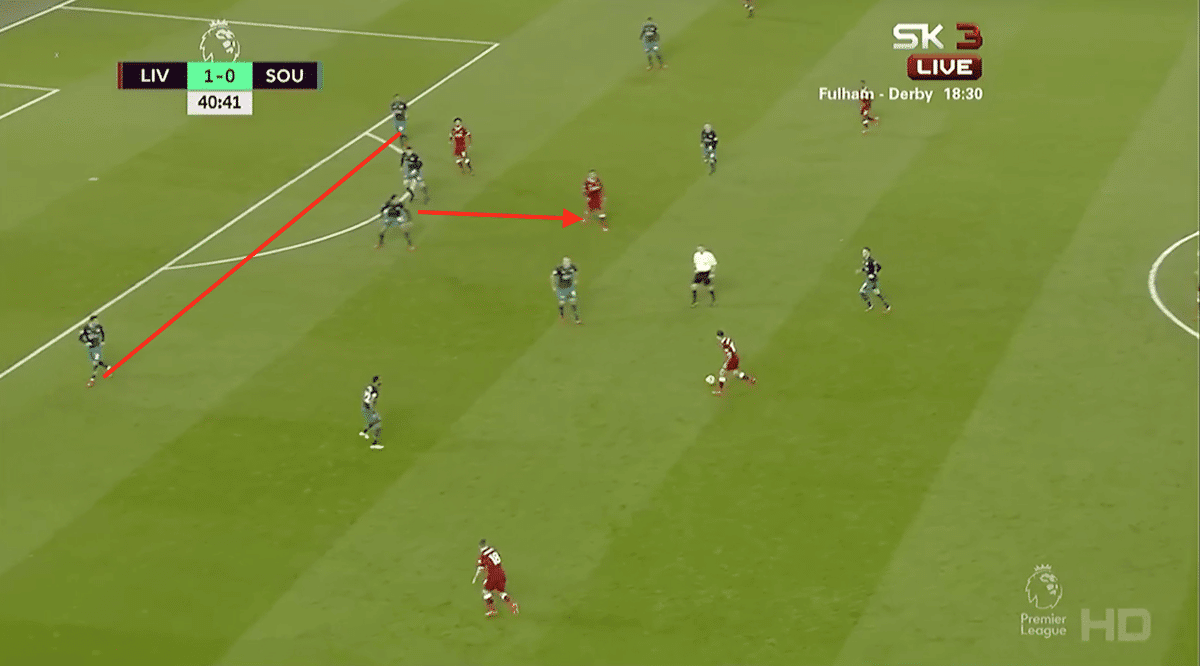 We then see the play ten seconds after the second picture. Firmino faked to go in behind before looking to have the ball played to feet. The pass is intercepted when van Dijk anticipates and shows strength to shrug the Liverpool forward out of his way to clear.

The ball doesn't fall to a Southampton player, and instead finds it's way to Coutinho. Firmino drops a little deeper to offer a passing option to his compatriot.

Van Dijk is a proactive defender who plays on the front foot, and you can see him looking at Firmino trying to time his move towards him to perfection, just as he did first time around.

He committed first time to closing the Liverpool man down and hasn't dropped back to fill the space since. You can see both full-backs are deeper than their centre-backs and that Cédric Soares, the right-back, has a lot of space to defend with van Dijk being so far over to his left. Salah ghosts between Hoedt and Ryan Bertrand to attack the acres of space caused by Firmino's movement, and Coutinho's pass is weighted to perfection.

Firmino didn't get onto the scoresheet but he's heavily involved in all three goals after his shot is parried into the path of Coutinho to fire home the third.

He's the instigator for Klopp's men; the one doing the selfless work which allow others to benefit. Firmino’s brilliance is still underrated. What he brings to the starting XI is still undervalued.

But, make no mistake about it, if he carries on creating opportunities and space for Salah to take advantage of, then the pair will be the latest to join the deadly duos list at Anfield alongside the likes of Luis Suárez and Daniel Sturridge, Fernando Torres and Steven Gerrard, Michael Owen and Emile Heskey, and Kenny Dalglish and Ian Rush.