After romping their way to promotion from the Championship and backed by the millions of ownership group Fosun, Wolverhampton Wanderers always stood a better chance of Premier League survival than most promoted teams.

As Fulham's struggles are showing, though, spending big doesn't always guarantee an easy time in the top flight. Wolves' success is about much more than simply blank cheques and well-connected advisors; theirs is also a story of sound planning and team-building.

At the heart of the team constructed by manager Nuno Espírito Santo and the Wolves higher-ups is Rúben Neves, the 21-year-old playmaker driving the Black Country side's ambitions and ensuring all that glitters in West Midlands football at present is old gold.

Seen as a major coup when Wolves signed him from Porto in the summer of 2017, questions were raised over Neves's ambition and how he was being advised  when he joined the then-Championship team.

Fast-forward 16 months, with Wolves now comfortably in mid-table one-third of the way into the 2018/19 Premier League season, few doubts remain over the soundness of Neves' off-field decision-making.

The key cog in his side's rapid rise, the Portuguese midfielder has assimilated perfectly to the English game, and if Wolves aren't soon able to provide the Champions League football his talent merits, the likes of Manchester City, Manchester United and Paris Saint-Germain are reportedly ready to offer the Molineux club a significant return on their investment.

Neves insists he remains focused solely on Wolves, though, and his presence in central midfield is allowing the second-tier champions to dream big on their top-flight return. 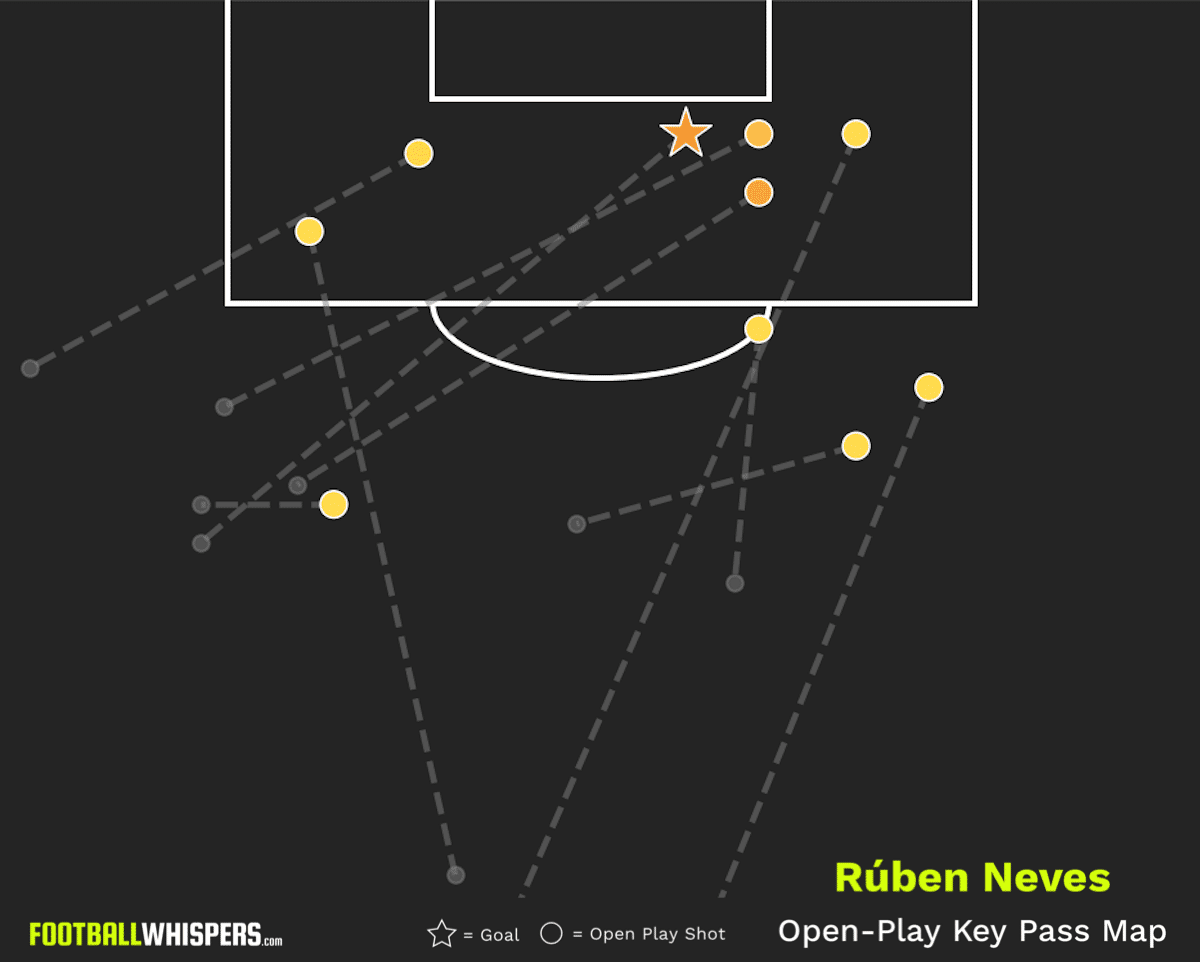 In Neves, Wolves have a player of Champions League calibre providing the thrust behind their lofty ambitions.

What's more, the eight-cap Portugal international's playing style and technical superiority enables Nuno's men to play a less-inhibited brand of football than would ordinarily be associated with a newly promoted team intent on protecting their Premier League status.

His ability to dictate a game's tempo through metronymic short passes gives Wolves a measure of control, and his rapier-like long passing is the weapon around which the Midlands side's dynamic counter-attacking play is built.

As the above map of Neves' open-play key passes so far this season illustrates, his ability to pick out team-mates in dangerous positions from deep in midfield, when allied with Wolves' speedy attacking players, sees defence turned swiftly into attack – his average of 11 long balls per 90 is the second-highest among Premier League midfielders.

As a tempo-setter, there are few better than Neves. In the Premier League this season, only four midfield players have attempted more passes than the man who captained Porto in the Champions League aged just 18, and all of those ranked higher play for ‘Big Six' sides, who generally see much more of the ball than Wolves.

This is not possession without intent, either; when the opportunity arises, Neves pulls the trigger and splits defences – he ranks ninth among Premier League midfielders for total open-play key passes this term. 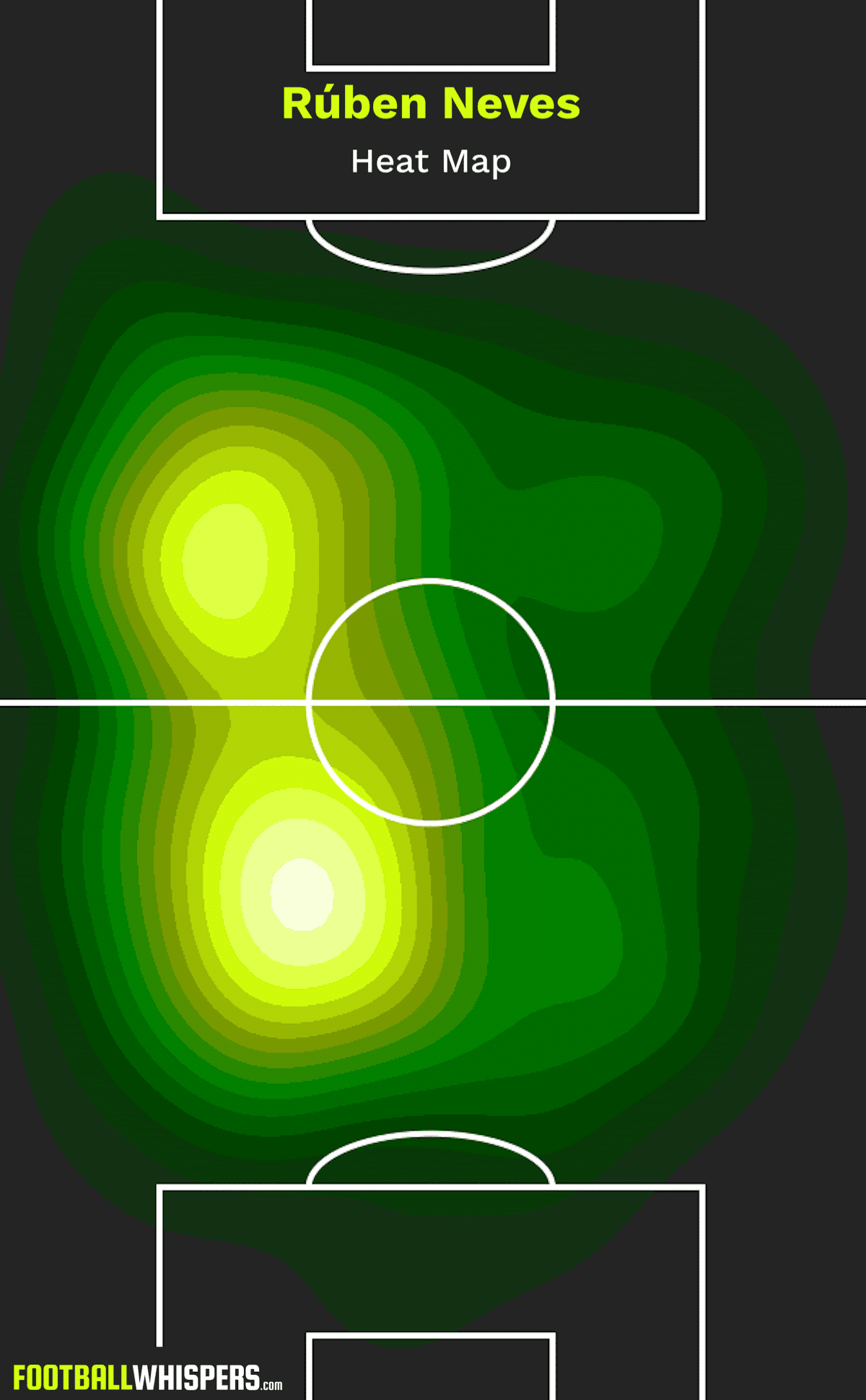 What is perhaps most remarkable about Neves' ability to conduct Wolves' midfield so completely is that, in compatriot João Moutinho, he is partnered by another skilled passer, rather than having a ball-winner alongside him doing the dirty work and carrying the defensive load.

In that sense, Neves is both ball-winner and ball-player, evidenced by his average of 3.81 combined tackles and interceptions per 90 minutes this term, a higher average than three of the four players to have attempted more passes than him – Jorginho, Paul Pogba and Granit Xhaka – with Manchester City's Fernandinho the only exception.

Indeed, so regimented in his positional discipline is the midfielder that his successful spot-kick in the recent 3-2 reverse at home to Tottenham Hotspur was his first touch inside an opposition penalty area all season.

As the above heat map shows, Neves is the man who controls from deep for Wolves before driving them forward – both on the pitch and up the table – through his masterful passing, discipline and intelligence.

“For many players, it is the first year in the Premier League, so we have to be calm,” Neves conceded in an interview with The Telegraph in August. “We work on that and we will try to put Wolverhampton on another level.”

With Neves their beating heart, there's no telling how high a level Wolves can reach.