There wasn’t a lot for anyone to take away from Manchester United’s drab, dead-rubber 0-0 draw with Southampton in last season's penultimate Premier League fixture.

In the Sky Sports studio, Graeme Souness, in a characteristic matter-of-fact style that has come to frame his brand of punditry, admitted the match was a stinker. However, he did conjure up a point worth discussing: José Mourinho starting with Marouane Fellaini and Axel Tuanzebe in the centre of midfield.

Now, we know we full well that the oft-maligned Belgian and his teenage lieutenant are not their manager’s first-choice pairing in the engine room, but their starting a Premier League match still highlighted the dearth of options available in such a key area.

Tuanzebe and Fellaini created one chance and attempted two take-ons between them, illustrating a critical lack of craft and enterprise in the middle of the park.

Mourinho often deployed a 4-3-3 system last season, favouring a midfield trio of Ander Herrera, Paul Pogba and Michael Carrick who, despite his advancing years and visibly wearying limbs, has continued to regularly outperform much of his more sprightly colleagues.

The key piece in Mourinho’s tactical puzzle, many have suggested, is Pogba, who, despite what the most ardent United fan will tell you, has underperformed on several occasions since his £89million arrival from Juventus.

Despite Herrera’s establishment as one of United’s brighter lights coinciding with another solid campaign from Carrick, Pogba often found himself shackled and frustrated in the middle, remonstrating wildly to his team-mates and attempting to do far too much once he gets hold of the ball.

One of Mourinho’s primary objectives in assaulting the transfer market this summer is finding the perfect candidate to bolster his midfield, one to unleash Pogba next season and launch a genuine title challenge.

Perhaps the best way forward for Mourinho is to turn to one of his former players.

While the Portuguese tactician may or may not have been thrilled at the prospect of working with Juan Mata again when he was appointed last summer, Mourinho is apparently desperate to re-link with Nemanja Matić.

The Serbia international was identified by Mourinho as key to winning back the Premier League during his second managerial stint at Chelsea, and that proved to be an accurate assessment.

Matić became one of the league’s most efficient operators in his own second spell at Stamford Bridge, helping Chelsea win the title in the 2014/15 season, while being named in the PFA Team of the Year.

That season, Matić completed more tackles than any other player in the league (129), won the third-most duels overall (278) and, contrary to the popular perception that he is “defensively-minded”, he made more passes in the opposition’s half, with the exception of Cesc Fàbregas.

While Eden Hazard captured the imagination with his fleet-footed dynamism in attack, Matić won as many plaudits thanks to his commanding displays at the heart of Mourinho’s midfield.

One of the main benefits of starting a player of Matić’s vintage is that it offers balance, aggression and tactical discipline in the centre, something United have been craving since Paul Scholes’ retirement. Carrick has fulfilled his duties admirably in recent seasons but, with his 36th birthday around the corner, the search for his long-term successor has become increasingly pertinent.

Louis van Gaal thought he had it in Morgan Schneiderlin, the Frenchman who fumbled his chance to assert himself at Old Trafford before being sold by Mourinho.

In signing Matić, United would acquire the tactical sensibilities they thought they were getting in Schneiderlin: refined, robust and a midfielder equipped with the precise features to give Mourinho that commanding presence in midfield, a player to form a formidable axis with Herrera and give Pogba the licence to bomb forward and do what he was signed to do: change games. 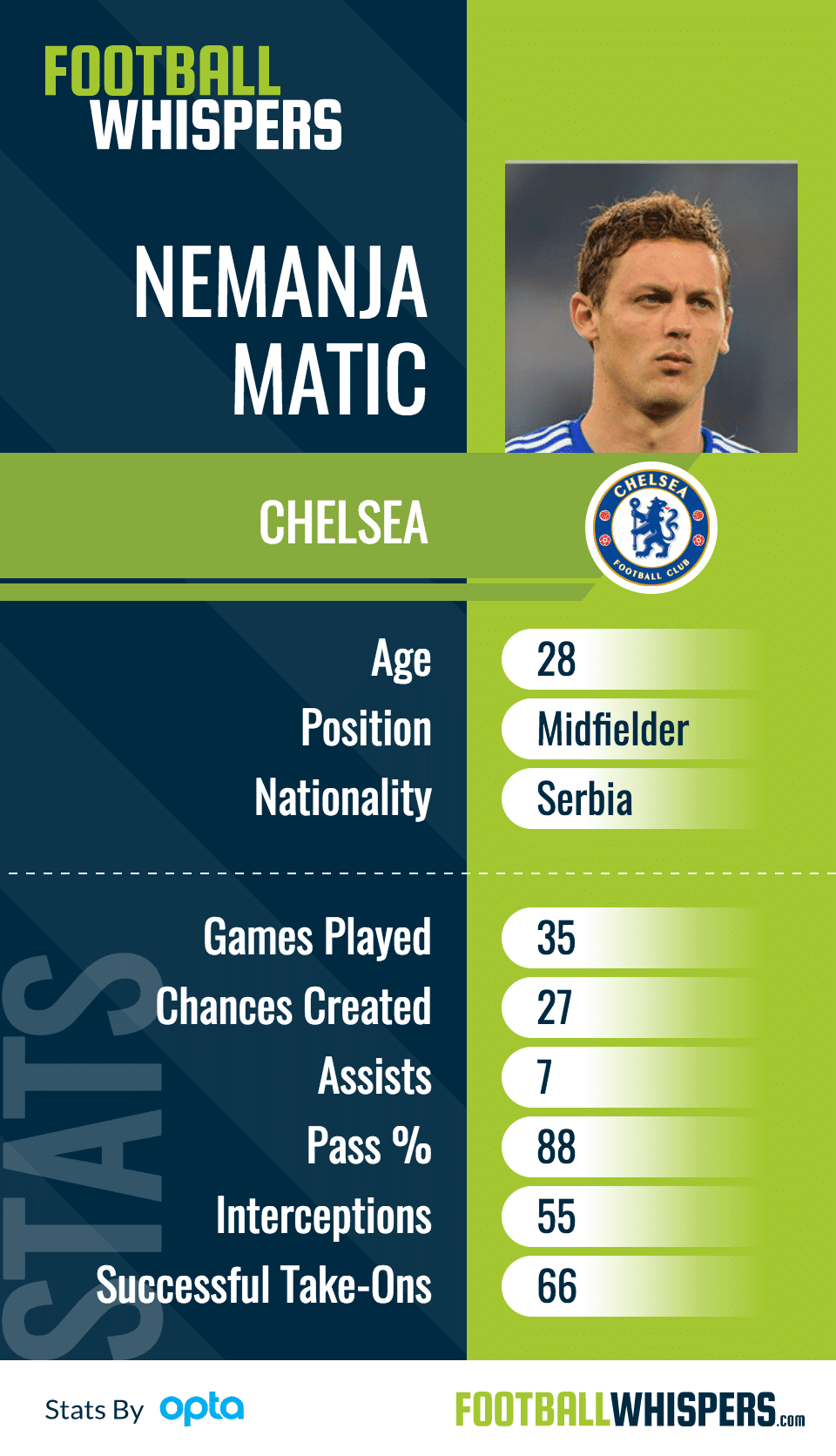 How does Matić stack up to United’s current crop?

Unsurprisingly, Matić towered above Carrick and Fellaini last season, but didn’t eclipse Herrera, who has enjoyed his best campaign by some distance since joining United in 2013.

The Serbian international averaged 0.77 chances created per game, which beats Fellaini’s 0.64 and Carrick’s 0.55. Of course, while he possesses the ability to open up the opposition, that is not why Mourinho is keen on making him a United player.

Operating alongside the ever-impressive N’Golo Kanté, the 28-year-old former Benfica man laid the base for Chelsea’s attack last season, allowing wing-backs Marcos Alonso and Victor Moses to gallop forward and offer support to the likes of Diego Costa and Hazard.

This is why Mourinho views him as a potentially vital cog in United’s machine. Matić would be the anchor in United’s 4-3-3, assuming a deeper role than perhaps he takes up at Chelsea to shield the defence and allow Herrera and Pogba to embrace their instinct to move things forward.

This was evident in Chelsea’s impressive 3-0 win over Everton at Goodison Park in April. In completing 88 per cent of his passes, winning eight duels and even notching an assist, Matić picked up the man of the match award in a performance of quiet competence and poise.

He was far from being merely a defensive block, though, as he completed all four of his dribbles, one of which was a purposeful burst which resulted in an assist for Pedro’s screamer.

Therein lies Matić's ingenuity. Recognising Everton’s tendency to leave space when they attacked, the Serbian strode forward and instigated attacks directly. For Pedro’s goal, the United transfer target breezed past Tom Davies before laying it off, showing the discipline which makes him an attractive package for Mourinho as the Carrick after Carrick.

How likely is a move given his status at Chelsea?

Antonio Conte and Roman Abramovich are certainly not going to happily sell a key player to a potential title rival next season, but there is a belief at United that a deal can be negotiated if they offer enough. The price quoted in reports is £50million, double what Mourinho paid to bring him back to Chelsea from Benfica in 2014.

However, Matić's form has been such since then that a hike in price is always inevitable. Crucially, United have successfully lured Juan Mata from the Blues in the not-so-distant past, so there is potential that a deal can be struck.

Mourinho reportedly covets Eric Dier too, but the feeling is that he will be even more difficult to acquire given his fantastic form at Tottenham Hotspur over the past two seasons.

In Matić, United have an excellent candidate to succeed Carrick as a less metronomic – but more mettlesome – presence in central midfield. Furthermore, he would offer Mourinho a rock-solid option in midfield to help elevate the Red Devils' chances of surmounting another daunting fixture schedule including domestic and European football.

Mourinho may decide to pursue alternative targets, but there is a sense that the coach would relish the chance to resume his productive working relationship with Matić. It could be one of the more erudite and profitable signings this summer, should it happen.