Those who claim the Championship is the most unpredictable league in Europe might be onto something. After all, who could have predicted Brentford's Neal Maupay becoming the most lethal striker in the division?

Those who don't follow England's second tier closely would be forgiven for having not heard of the 22-year-old Frenchman. Even fewer had when he moved from Saint-Étienne in July 2017 for a reported £1.6million.

Having scored 11 times in 25 starts for Ligue 2's Brest, Maupay was hardly arriving in West London with a prodigious scoring record. He followed that up with a solid if unspectacular 12 strikes from 25 starts in his maiden campaign in English football. So far nothing to indicate what was to come.

But Brentford's scouting and recruitment is the best in the Championship, maybe even England, and they knew they'd unearthed a gem. Last season the Versailles native found a new gear, scoring 25 times in 43 starts, narrowly missing out on the Golden Boot to Norwich City‘s Teemu Pukki. The Fin hit 29.

Pukki and the Canaries will test themselves in the Premier League this season while Tammy Abraham, who also netted 25 while on loan at Aston Villa, has returned to Chelsea and will attempt to prove he is worthy of a place in Frank Lampard's squad.

Maupay has had to be patient, but with reports linking the Bees forward with Sevilla and Sheffield United, he looks set to earn his big move, one way or another. 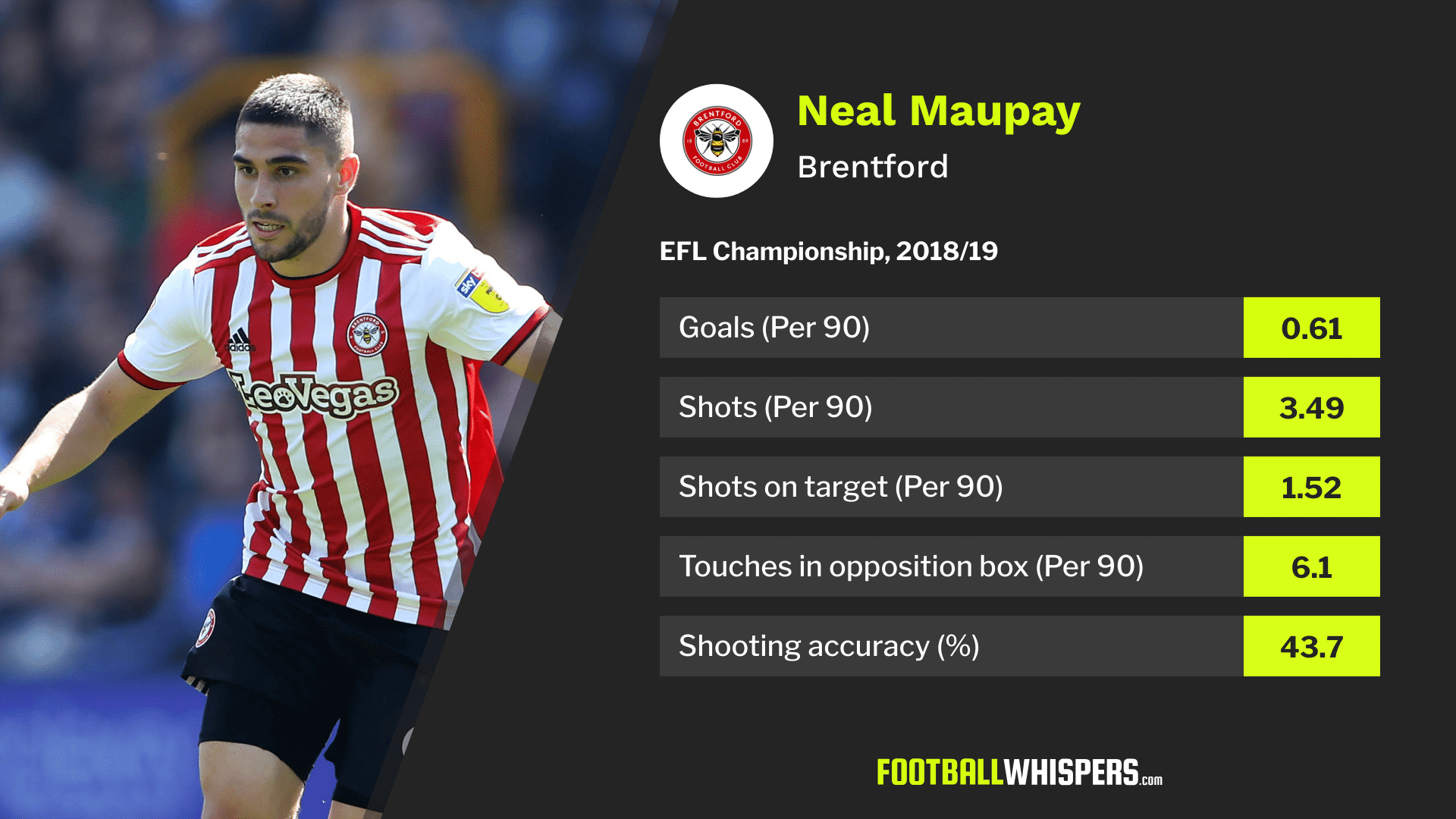 So, what makes Neal Maupay so good?

The short answer is goals. Lots of them. While all but one of his 25 efforts last season came from inside the box, Maupay scores all kinds.

He is a poacher with predatory instincts which come alive in the penalty area. It's there his constant movement and alertness makes him a nightmare for defenders. But he is equally menacing when loitering on the shoulder of the last man and using his pace to burst into space and stretch defences.

Capable of scoring with his right, left or even head, he gets the odd spectacular goal too. His nerveless stoppage-time winner against Aston Villa (below) in February was the perfect example of that.

Receiving the ball with his back to goal, he evaded one robust challenge, shimmied past another defender and planted an unerring curling finish past Villans keeper Lovre Kalinić to settle the tie.

That's not to say he doesn't do plenty of work outside the penalty area, though. He recorded eight assists for his Brentford teammates, at a rate of 0.19 per 90, and created eight big chances at the same rate. He also laid on 1.19 shot assists – that's passes leading to shots – per 90, ranking 16th among his peers.

While the highest concentration of his work is done in the penalty area, he is not averse to dropping deep to link the play and struck up a good understanding with fellow forwards Ollie Watkins and Saïd Benrahma in Thomas Frank's preferred 3-4-3 system last season.

It's difficult to poke holes in the Frenchman's game. An obvious area for improvement would be aerially where he won just 0.72 duels per 90 though, at 5ft 7ins, there is only so much he can do. That said, he still bagged three headers last season which is by no means a bad return for someone of his stature.

The question now is whether he is ready to step up to the Premier League or LaLiga. Maupay certainly thinks so. When asked about the possibility of playing in the top flight in March he said: “Yeah, I think I’m good enough to play against those kinds of players. I work hard every day in training, try to improve every day. So we will see.” 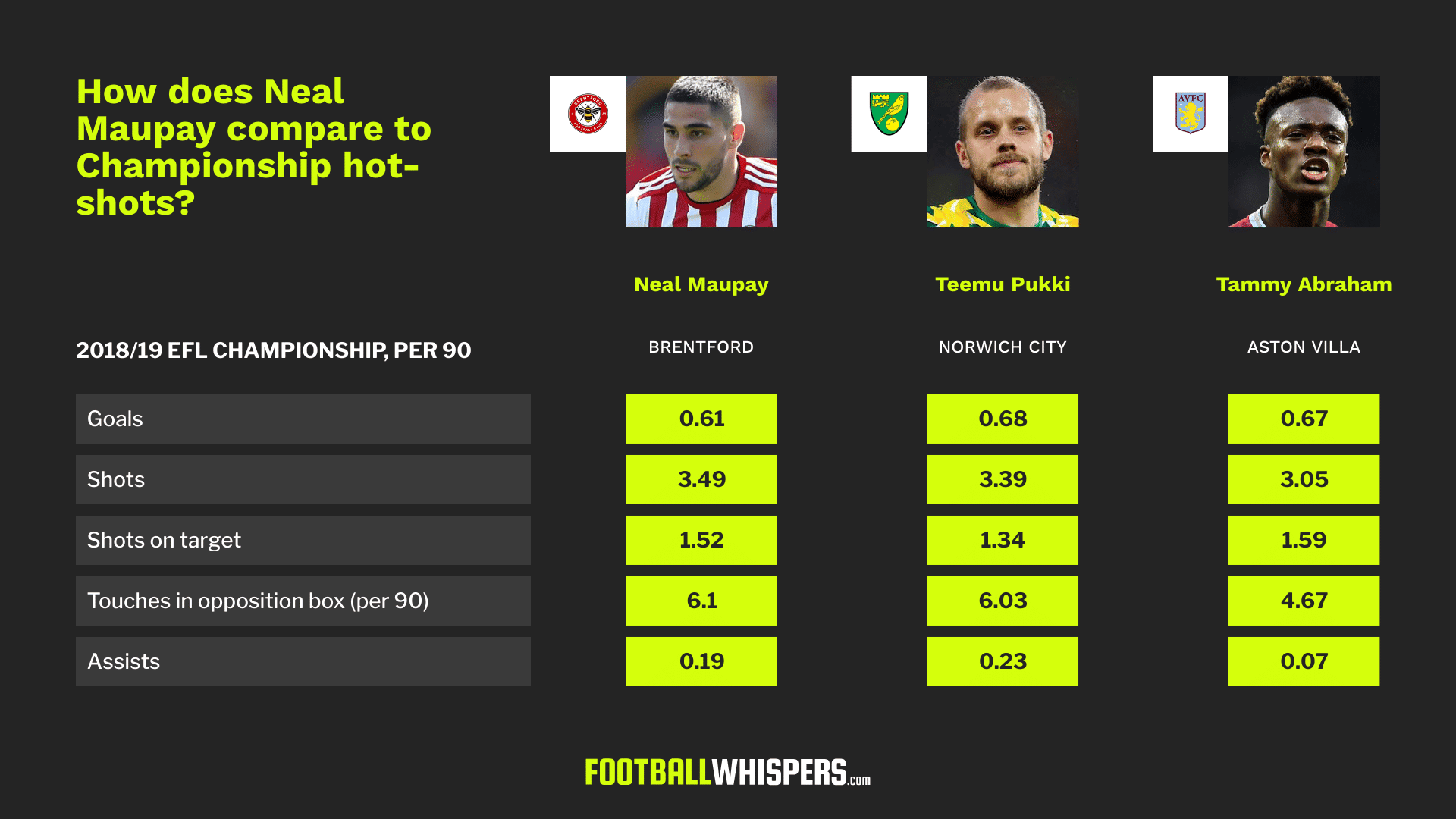 Taking Maupay's data and comparing it with the two other forwards mentioned already – Norwich's Pukki and Villa's Abraham – we can see the Brentford man comes out on top in most metrics.

The French-Argentine takes more shots than either player and Abraham, with 1.59 on-target efforts per 90, is the only Championship forward with a better return than Maupay. The Sheffield United transfer target takes more touches in the box than both men and is narrowly second to Pukki for assists (0.23 per 90 vs. 0.19).

Now the secret is out, the only question which remains is who will win the race for the Championship's most wanted?