It seems cruel that when a French club builds a team with the potential to challenge Paris Saint-Germain, they are inevitably dismantled.

Monaco dethroned PSG in 2017, clinching the Ligue 1 title with a team of extraordinary potential.

Then came the inevitable exodus. Kylian Mbappé was loaned (then sold) to Les Parisiens, Bernardo Silva and Benjamin Mendy were both snapped up by Manchester City and Tiemoué Bakayoko embarked on his own Premier League adventure – or misadventure, as it transpired – with Chelsea.

This summer, although they won't be newly-crowned champions, Lyon are in danger of having their own project ripped apart.

Under the auspices of former player Bruno Génésio, Les Gones have assembled one of the most talent-rich teams in Europe. They are currently third in Ligue 1, six points off Lille, but have efficiently juggled Champions League football with domestic commitments, qualifying for the last-16 of Europe's top club competition.

There, they will meet Barcelona. A two-legged tie with the Catalan giants is an excellent opportunity for Lyon's rising stars to showcase their talents.

Nabil Fekir will be keen to remind people why Liverpool chased his signature last summer, Bertrand Traoré hopes to bolster his reputation as one of France's most exciting wingers while Houssem Aouar has the perfect platform on which to express his creative talents.

Then there is Tanguy Ndombélé, arguably the most coveted of the bunch. A reported Juventus, Manchester City and Manchester United transfer target, the 22-year-old is valued at around £70million by Lyon.

Here, we take a closer look at how he's come to earn that price-tag and why he's popping up on the radars of some of the biggest clubs across Europe.

Ndombélé's career quickly transformed. During his youth career he was criticised for being overweight, so he worked hard on his fitness and soon played a major role as Amiens achieved promotion to Ligue 1 for the first time in history.

He was duly snapped up by Lyon on a season-long loan, starting games in Ligue 1 last season as Génésio's side finished third.

Unsurprisingly, they exercised their option to sign the midfielder for just over £7million. The suggestion that he may go for ten times just a year later offers a striking indication of just how deeply he has impressed.

Already a hot prospect in France, he alerted Premier League fans to his abilities during Lyon's shock Champions League win at Manchester City in September. Goalscorers Fekir and Maxwel Cornet stole the headlines but it was Ndombélé, as well as the impressive Aouar, who stood out at the Etihad.

In the reverse fixture at the Parc Olympique Lyonnais in December, Cornet – again – dominated the spotlight, scoring twice in a thrilling 2-2 draw. But again, Lyon's central midfielder was key, completing more dribbles and landing more tackles than any other player on the pitch.

Unsurprisingly, links to the Premier League champions began to emerge. wrote that City view the Frenchman as the ‘solution' to Guardiola's lack of depth in that position.

It's clear why Ndombélé is being bigged up as a potential long-term successor to Fernandinho in the City midfield; he possesses the combination of aggression, physicality and finesse that Guardiola deems vital for midfielders in his system.

Positionally sound, Ndombélé has the intelligence to find space and offer an outlet for the centre-backs looking to pass into midfield. A crucial difference between the Frenchman and Fernandinho, though, is that the Lyon man can use his explosive pace to drive up the pitch in a flash.

At 33, Fernandinho, while still a shrewd operator at the heart of Guardiola's system, cannot match the 22-year-old's dynamism and penetrative runs. With 1.82 successful take-ons per 90 in Ligue 1 this season (2.68 total), it's clear Ndombélé offers a different dimension to the Brazilian, who has attempted half of the former's 50 dribbles.

And that is a key facet to the Guingamp youth academy graduate's game. Ndombélé has a tidy touch and low centre of gravity which allows him to manoeuvre his way out of tight spaces with the ball.

A balletic combination of power, speed and balance, he can be unplayable at times when in the right mood. 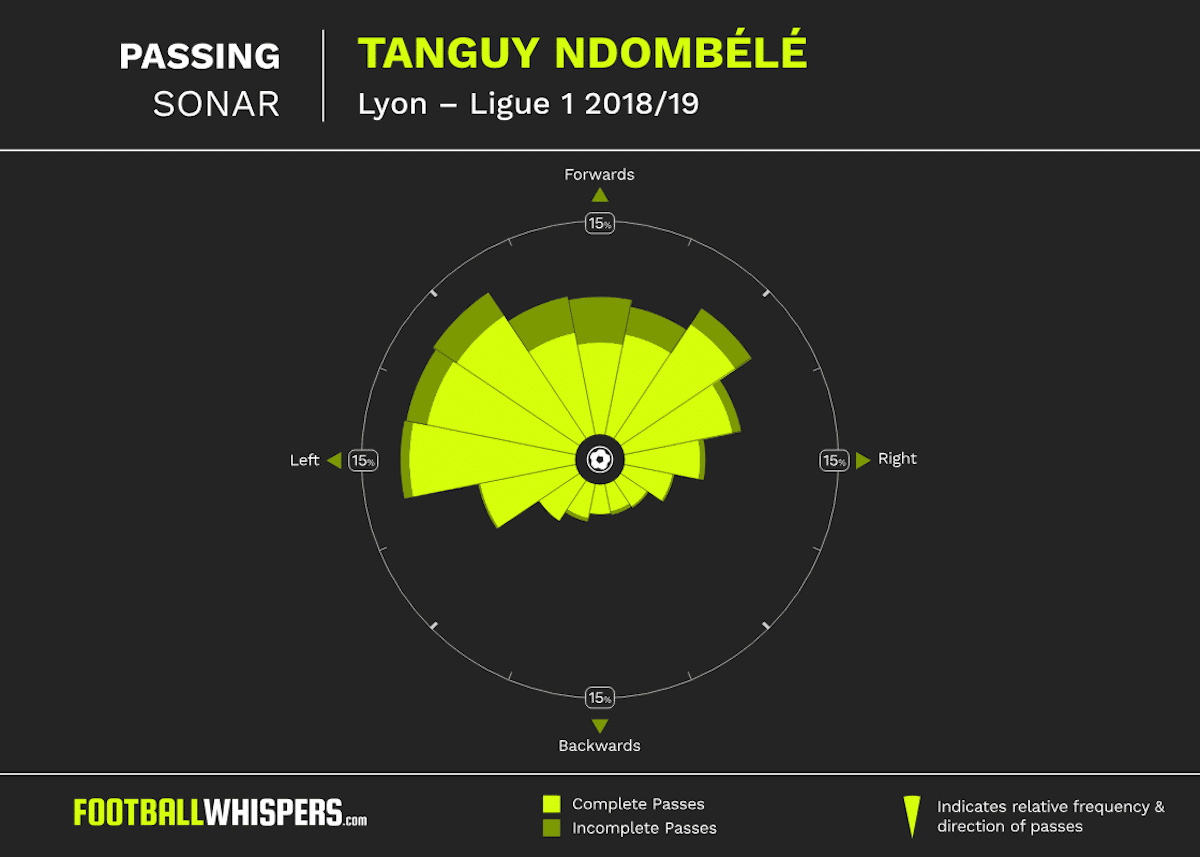 While he often takes up deep positions, the France international is hugely influential in the attacking third. With four assists in Ligue 1 this term, he has created more goals than Fekir.

An often overlooked stat, he has also notched four ‘second assists,' which is essentially supplying the supplier of the goal. While he isn't always the man to play the killer pass into the striker, he is often the one to spark a move into life; this is something a detail-obsessed coach like Guardiola values highly.

This creativity, the ability to open up defences with neat through-balls and cleverly disguised passes, only bolsters his suitability for Guardiola's brand of football.

One of the attributes for which Ndombélé has been most lauded is his progressive attitude on the ball. He is always looking for a forward pass (he's attempted 366 forward passes in Ligue 1 in 2018/19), an incisive pass that will break the lines and drive Lyon up the pitch.

He averages 8.82 passes into the final third with an impressive 82.5 per cent completion rate. 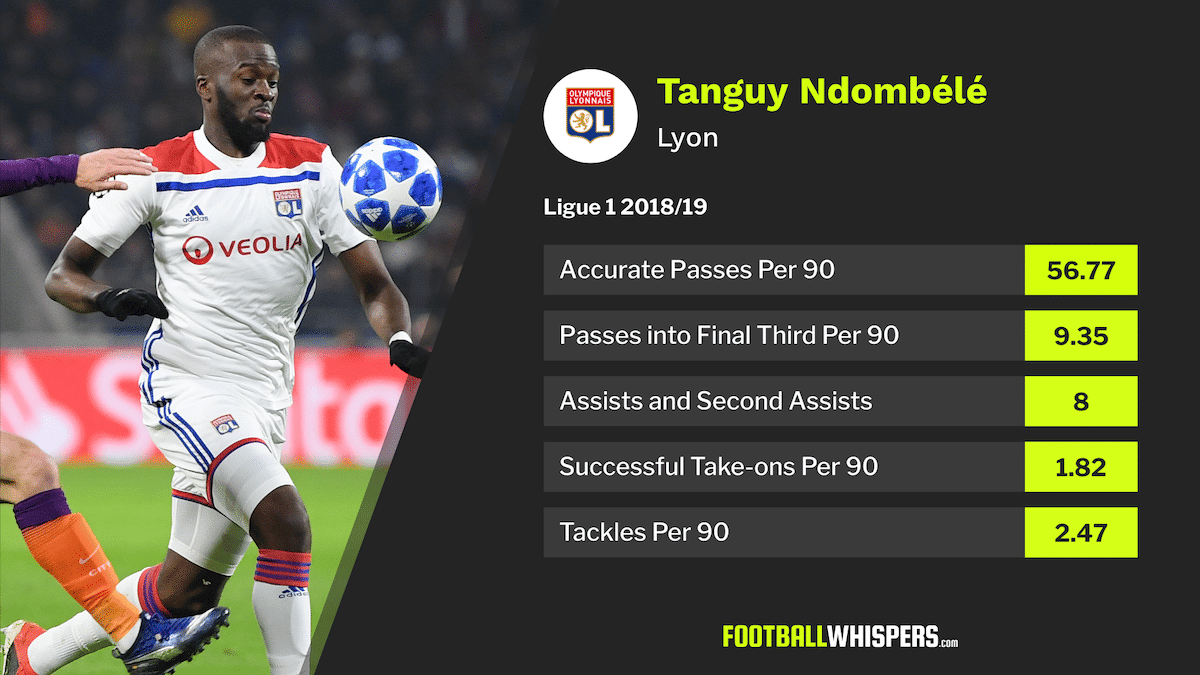 He still has much to learn, of course. Prone to lapses in concentration, Ndombélé would be a project for Guardiola, another gem to polish and improve into a world-class player.

He would presumably act as Fernandinho's understudy at first, if he were to join City, before developing into an accomplished Premier League ready to start regularly, like Bernardo Silva, who somehow already looks a worthy successor to David Silva at the Etihad.

Ndombélé is yet to crack the national team. Competing against an immense pool of Les Bleus talent in midfield –  Paul Pogba, N’Golo Kanté, Blaise Matuidi, Steven N’Zonzi, and Corentin Tolisso – he is yet to start a competitive game for the world champions.

Having just turned 22, though, his time will come. But his future at club level looks to have exciting opportunities at a much earlier juncture. Linked with several clubs, he seems the ideal candidate to fill the future Fernandinho-shaped hole in City's midfield.