Lyon went big in the summer. Finishing outside the top three places last season was not good enough and sparked the Ligue 1 club into action.

Four additions in the defence were followed by the arrivals of Mariano Diaz from Real Madrid, Pape Cheikh from Celtic Vigo and Bertrand Traore – who helped Ajax reach the Europa League final – from Chelsea.

However, on deadline day, Les Gones made one more move, a deal which has gone under the radar but could perhaps be one of their best in years.

Tanguy Ndombèlé joined from newly promoted Amiens with the former Ligue 1 champions paid £1.8million just to secure a one-year loan. They made sure to include an option to buy the central midfielder for just over £7million in the summer.

At this stage, it’s hard to see any scenario where they don’t exercise that clause.

Lyon had been looking for upgrades in midfield after the departures of Maxime Gonalons and Corentin Tolisso.

While Lucas Tousart has filled the role of their former captain, Ndombèlé has a different profile to Tolisso, who joined Bayern Munich in the summer.

With their new signing and the emergence of Houssem Aouar from their academy, the new OL midfield is catching the eye.

Happy to sit in front of the defence, like Gonalons used to, Tousart has made the holding position his own. Where Bruno Genesio has had difficulties is deciding who else should play beside the 20-year-old.

Aouar was excellent against Saint-Étienne and it helps he can also play as the No.10 or on the wing.

Playing 4-2-3-1 the most natural option is Ndombèlé. With a Naby Keïta-esque style to his game it’s becoming more and more challenging for Genesio to pick anyone else.

“He showed all the qualities we knew he had when we signed him,” said the coach after Ndombèlé made his debut in the opening league game against PSG. “We know he is a player who can link the defence and attack from midfield with either foot.

Lyon’s midfield three are young and impressive and they each have their own standout points. But it’s Ndombèlé who leads them in completed dribbles, average passes and key passes per 90 minutes. 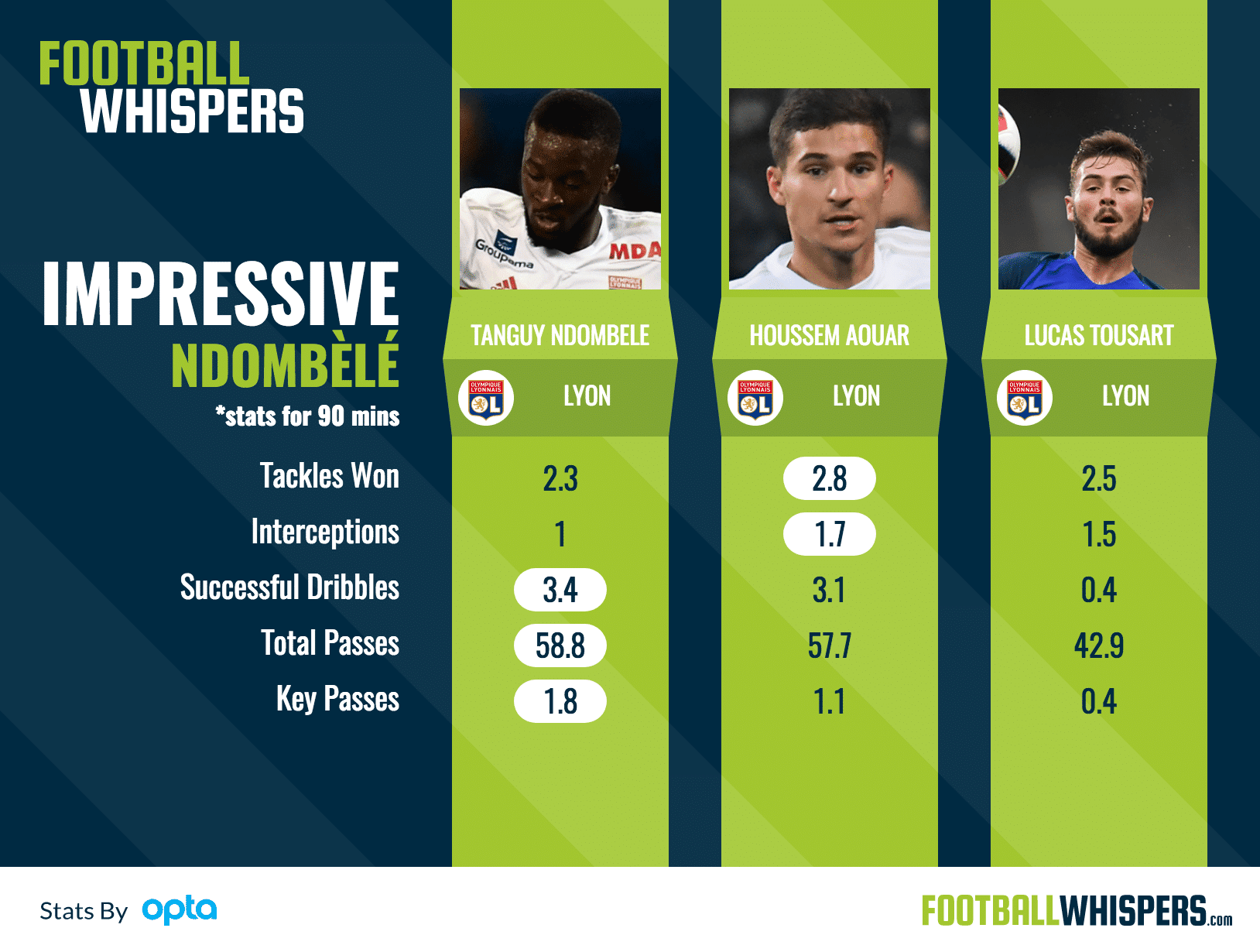 He leads the entire OL team in terms of dribbles, which is impressive when you throw Nabil Fekir, Memphis Depay and Traore into the mix.

One of Ndombèlé’s strongest points is when he decides to push forward and play between the lines.

From the images below, you can see when he becomes aware of the space. He drops a little deeper to take advantage and receives a pass in the final third. 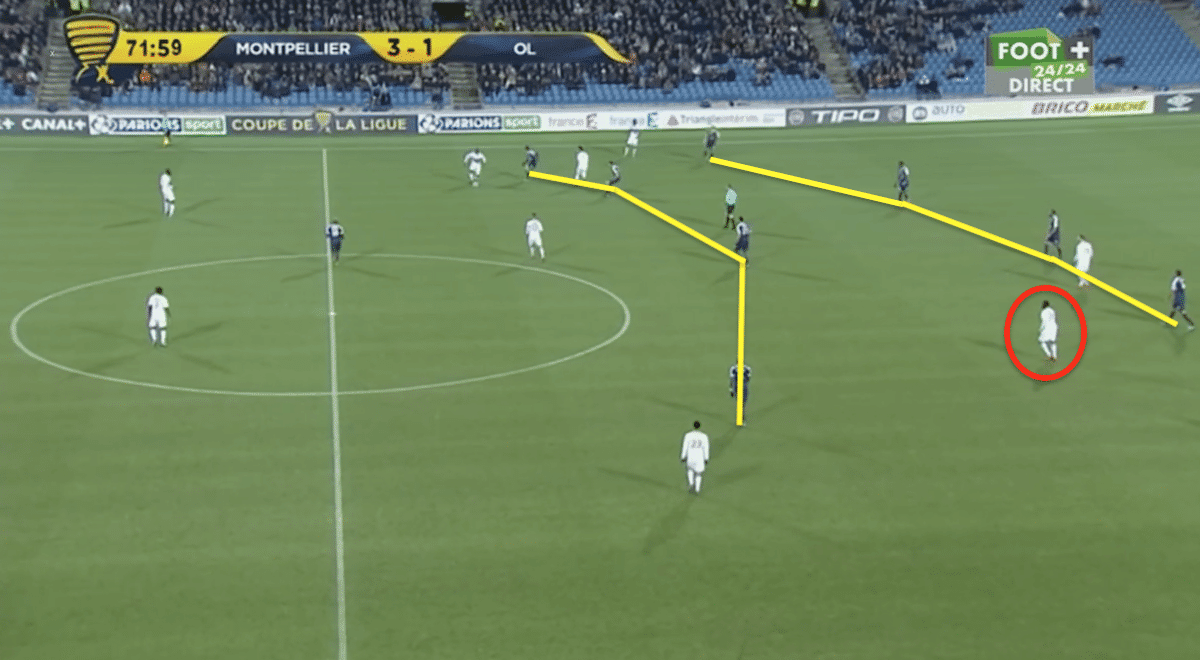 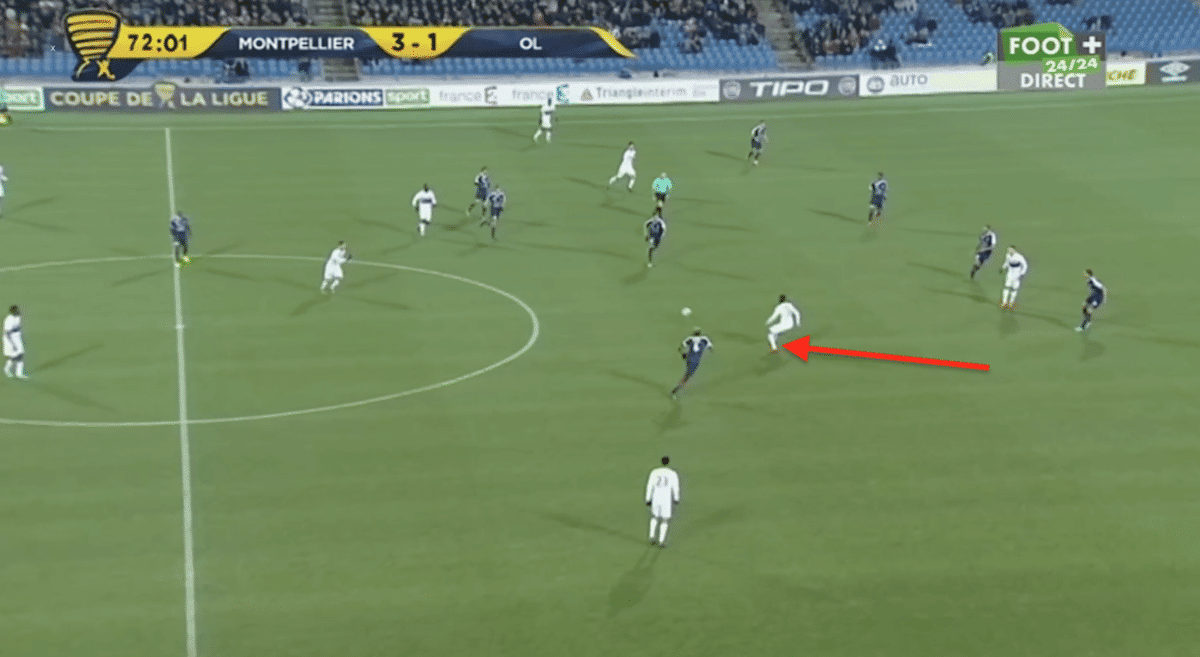 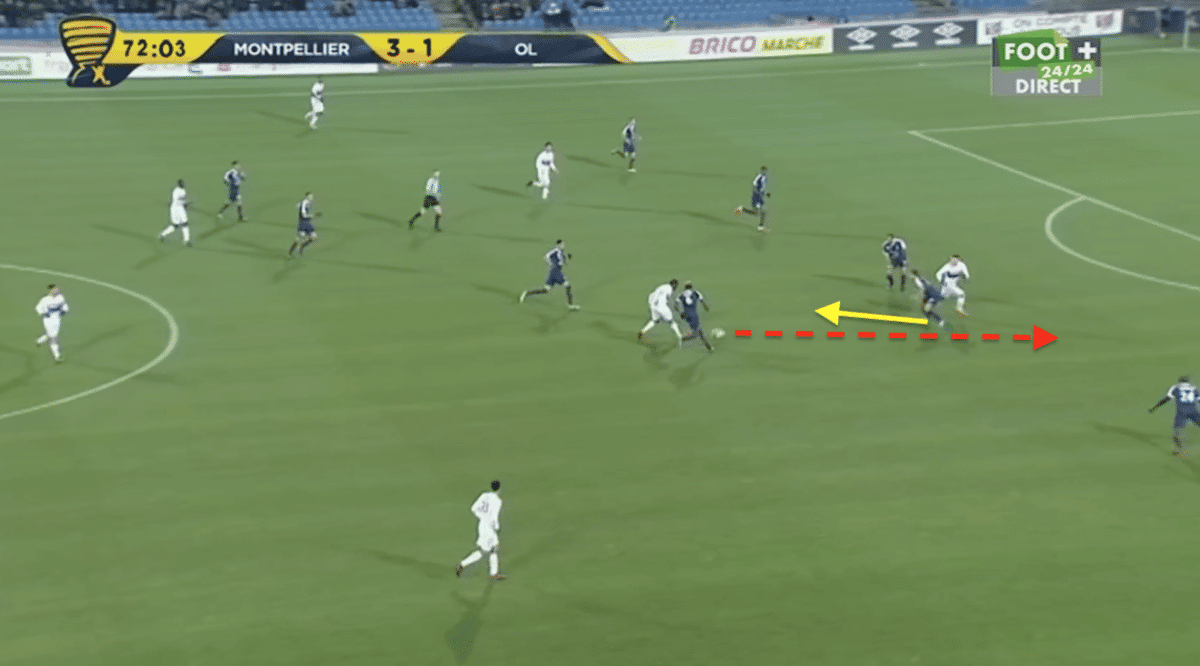 He then forces the Montpellier centre-back to make a decision – stepping up briefly to try and close him down – that creates an opportunity for Ndombèlé to slip in the through ball.

This is no ordinary central midfielder.

Happy to track back, he’s not an N’Golo Kanté type, chasing down every loose ball, desperate to win back possession and constantly winning interceptions – averaging just one per 90 minutes – but Ndombèlé is no slouch.

Tracking back against Atalanta in the Europa League, as soon as the ball carrier goes back on himself, the Lyon man is there to pounce. 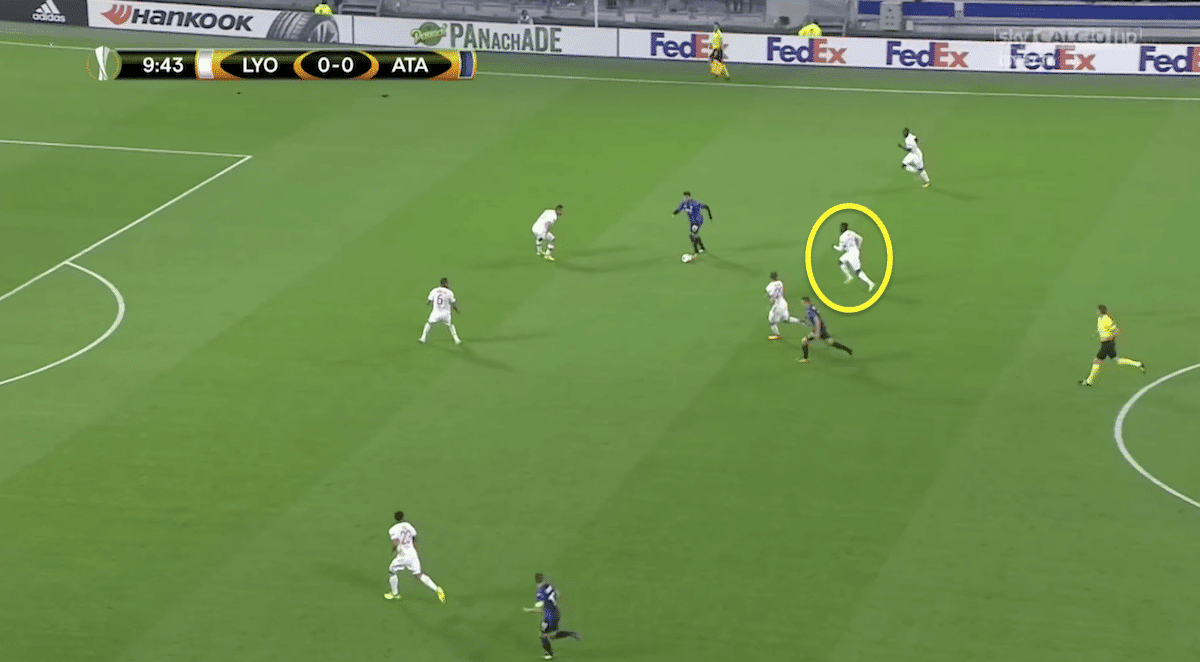 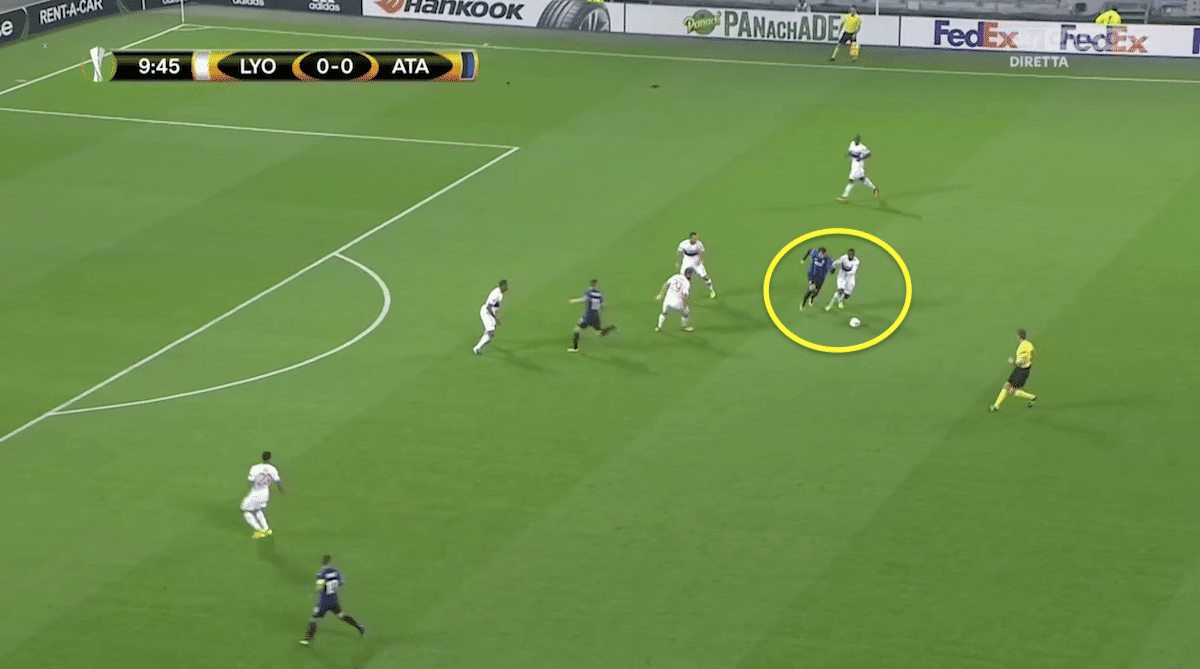 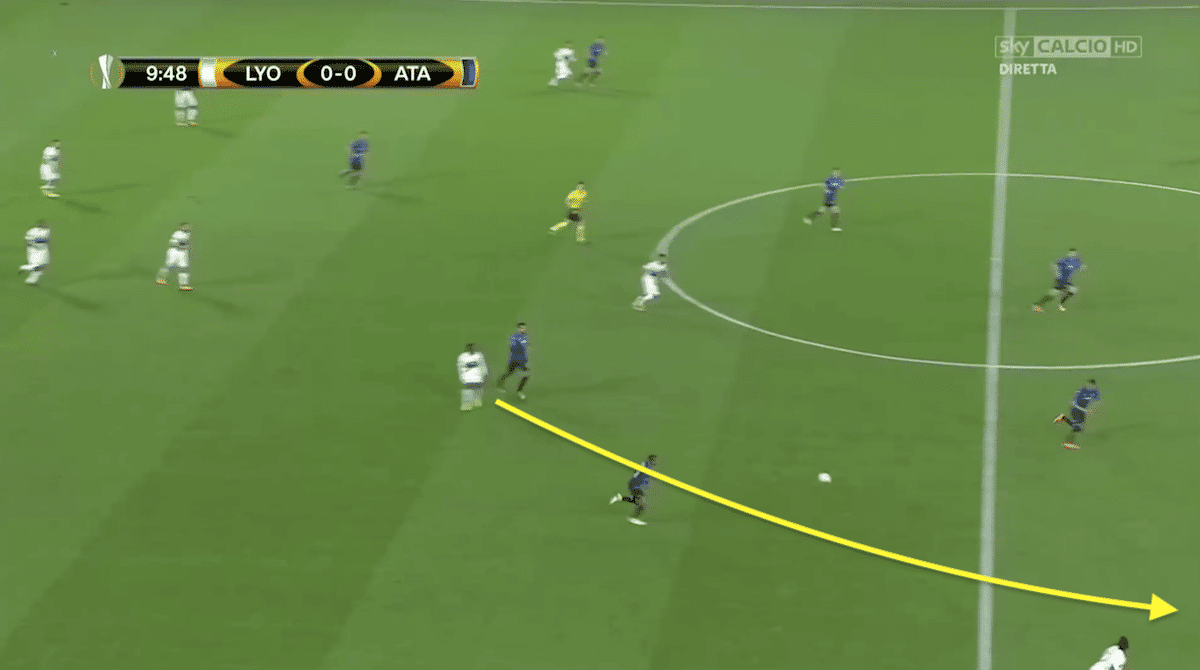 Getting his body between his opponent and the ball, Ndombèlé wins the power battle and begins his charge forward.

Rather than make the easy pass to his nearest team-mate, the 21-year-old has his head up and picks a great through ball down the wing, springing another counter.

When you have the firepower Lyon possess in their attack, you need someone in the midfield who can transition from the defensive phase and break into the final-third. Ndombèlé is built perfectly for that role.

He’ll harass the man in possession, then spark Lyon onto the front foot. Yet, once he does his job in that regard, he’s not finished, the former Amiens man has the composure and the vision to pick a pass with either foot.

Ndombèlé is not afraid to get to the by-line, using his excellent quick footwork to expose and leave defenders for dead, then he can pick out a variety of crosses for his team-mates.

Apart from youthful exuberance, and you would expect him to improve and blossom with time and more minutes at the highest level, it’s hard to pick out an area in which the midfielder is lacking.

As he helped Amiens pull off an amazing surprise promotion to Ligue 1, he scored twice and added seven assists in Ligue 2.

Despite scoring a close range header against Villarreal in the Europa League, his shots per 90 minutes has dropped from 1.9 with the newly promoted side to 0.8 at Lyon.

Ndombèlé did smash the crossbar against Paris Saint-Germain, which could have been one of the goals of the season, but he needs to grow into his position a little more, providing a greater goal-scoring threat in the final third.

When you look at the type of players who have found success in England – like Kanté at Leicester City and Chelsea – and the type of player Manchester United, Arsenal and Liverpool often seem to miss in the middle of the park, Ndombèlé ticks all the boxes.

He’s powerful, taller than the Liverpool-bound Keïta, and he has both the defensive strengths and attacking instincts to make an instant impact.

From watching his impressive performances for Lyon, you can see how technically gifted he is, picking eye-catching passes with either foot, or skipping past defenders before sprinting into the final third.

Just like Kanté, he started to build his reputation in Ligue 2, before instantly finding his feet in the top flight.

If he continues to impress for Lyon, it won’t be long before England comes calling and don’t be surprised in Ndombèlé soon becomes your favourite player, regardless of where he is playing.