National Bank of Egypt to win

There isn't massive amounts between these sides right now. Will there be anything between them when they meet on Monday? Find out with our National Bank of Egypt vs Ceramica Cleopatra match preview with free tips, predictions and odds mentioned along the way.

Home side to ‘Bank' three points

National Bank of Egypt have been a difficult team to beat; they have no losses in their last 11 games in all competitions, having won five and drawn six of those games. National Bank have also had a fairly good record at home; they've won five of nine home games, with two draws and two losses. In contrast, Ceramica Cleopatra have mostly struggled away from home this season; they've played 10 road games so far, and won just one of them. It's also fair to point out that Ceramica won just three of their last 16 league games; and for these reasons, we're predicting a win for National Bank of Egypt.

Ceramica have scored a lot of goals recently; they found the net in four of their last five games, with seven goals scored in their last three games alone. On the other hand, Ceramica have not been able to keep the goals out; they kept just one clean sheet in their last seven games. Like Ceramica, National Bank have scored and conceded a lot of goals recently; they scored in 10 of their last 11 games, whilst keeping just one clean sheet in their last eight games. Both teams scored in seven of National Bank's last eight, and three of Ceramica's last four games; on that note, we should expect goals at both ends.

A midtable clash between two mediocre sides or more to it?

Neither of these sides are in bad form right now but anything beyond an upper midtable finish is looking like a longshot. That said, the result of this game could go a long way to determining which of the sides finishes highest in the standings.

National Bank of Egypt ended their four match winless run with a 3:1 win over Al Masry a couple of days ago; they had drawn four games in a row prior to that win. National Bank have no losses in their last 11 games across all competitions, with five wins and six draws; they'll look to extend that run to 12 games as they host Ceramica Cleopatra.

Ceramica Cleopatra have had a fairly decent run of form lately; they've lost just once in their last five games, with three wins and a draw. Ceramica will visit Al Shorta Stadium on Monday; they'll be eyeing their fourth win in six games.

A quickfire FAQ on National Bank of Egypt vs Ceramica Cleopatra 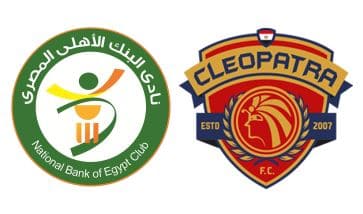