There aren’t many – if any – Championship players attracting interest from Nathan Ferguson.

The West Bromwich Albion defender only made his league debut on the opening day of the season, capping a man-of-the-match display with an assist for Matt Phillips in the Baggies’ 2-1 win at Nottingham Forest.

Such has been his impact at The Hawthorns the 19-year-old has missed just two Championship fixtures since.

But when some of Europe’s biggest names are taking a close look at a player with 14 league appearances to his name, they’ve clearly got something special.

Sensing the circling sharks, West Brom have offered Ferguson a new five-year deal to remain at The Hawthorns. Even if he signs it, you can bet the teenager won’t see it out.

Juventus, Atlético and Marseille aren’t the only sides interested. Closer to home, Tottenham Hotspur and Crystal Palace are both keen on Ferguson who is, nominally at least, a centre-back. He has shown versatility and no little composure in playing at right and left-back already this season too.

That is arguably the most impressive thing about the talented youngster – he has handled everything thrown his way with the air of a ten-year veteran rather than a player who had only played in the EFL Trophy until this season. In fact, Ferguson hasn’t even so much as had a loan spell at a local lower or non-league side.

But on the basis of his cool, calm and composed displays so far, it’s hard to imagine there’s much the England Under-20 international would learn from a stint further down the pyramid.

“He is playing left-back and (at QPR) he’s had a shot and scored from 20 yards – that is the good thing about being young. He is positive.

“It is our job to keep him humble. There is no doubt he has an extremely bright future and a great career in front of him.”

It’s not just going forward that Ferguson is impressive, though anyone who witnessed his goal at Loftus Road where he galloped down the left before cutting inside and finishing coolly, would be forgiven for thinking he was a flying winger rather than a full-back. 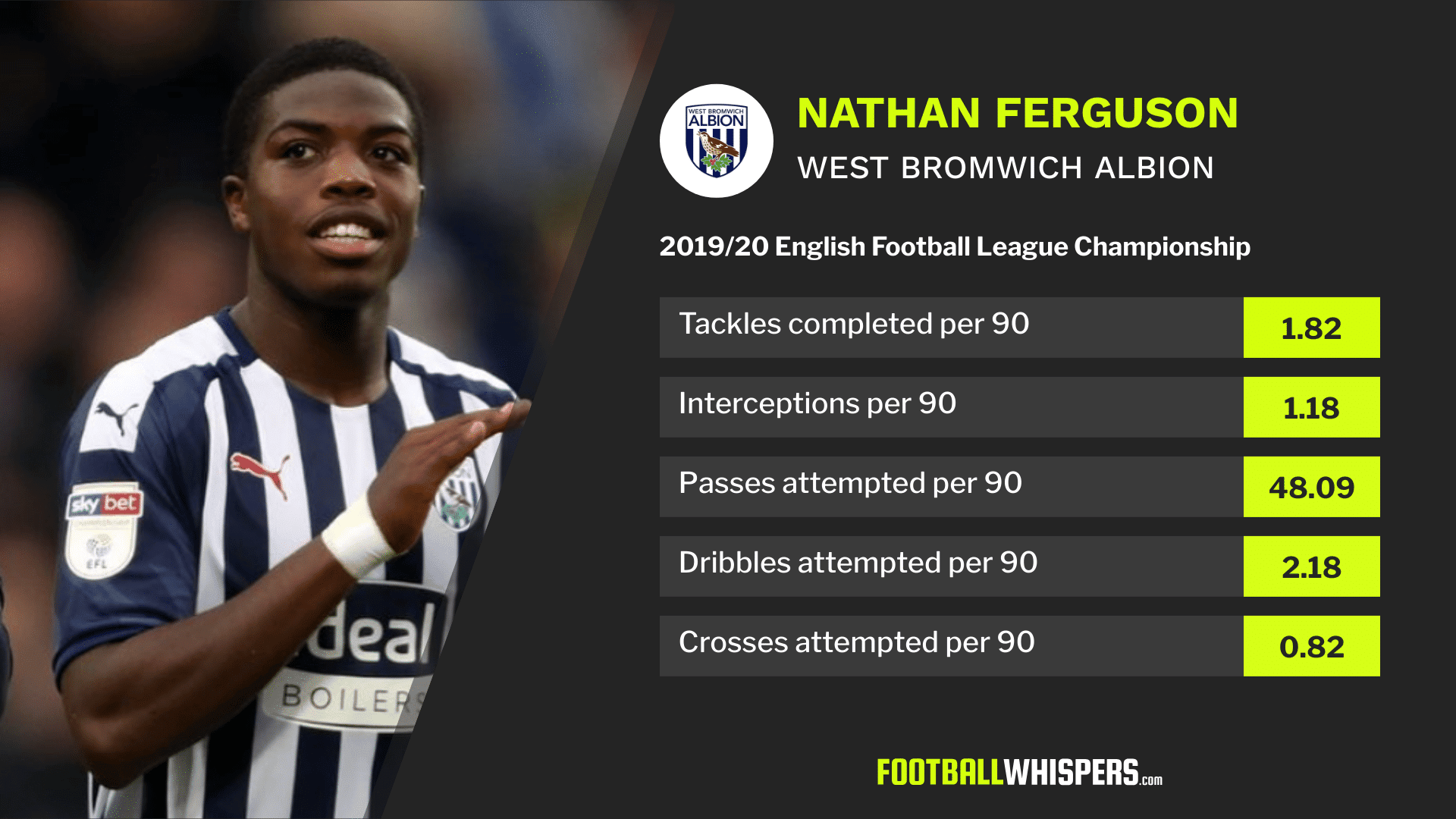 Ferguson is ranked sixth among Championship full-backs for successful dribbles (1.54 per 90) and eighth for attempted take-ons with 2.18. His involvement in an attacking sense is evident in his 76.63 touches per 90 – the 14th-most of any full-back in the league.

Full-backs who contribute going forward are usually blighted with some defensive inconsistencies. But Ferguson is impressive both in and out of possession. He’s won the ninth-most defensive duels for a Championship full-back this season (8 per 90) and is 15th for possession regains in the attacking third season with 0.36 per 90, which indicates he is comfortable pressing high up the field.

Quick, strong and good in one-v-one defensive situations, Ferguson has all the attributes required of a modern full-back. If reports linking him with a move to the continent are accurate, he has the world at his feet too.

Despite all that, Ferguson remains grounded. After all, it was only a few short months ago he was a complete unknown. Yet thanks to Bilić’s keen eye for talent, he has established himself as a key component in this Albion side.

“It’s certainly been a surreal experience so far for me this season,” Ferguson told the club’s website.

“It’s hard to put into words how much I am enjoying it. Everything. Training with the first team, being around the first team and the manager.

“It’s been really good. It’s definitely been the best few months of my life. I’ve had a taste of what being a first-team player is like and I want more and more of it.”

And working under a former defender in Bilić is evidently proving fruitful for Ferguson who recognises the part the ex-West Ham and Everton centre-half has played in his rapid ascent.

“I would say that my performances have been good but I know there is room for plenty of improvement,” he admitted.

“I’ve been speaking to the manager a lot about my positioning, my delivery and my overall game. I am learning a lot from him, He’s a very good manager. He knows when it’s time to step in and step out.”

Step in or step out: Albion will be hoping it’s the former. But they might find they’re disappointed thanks to the admiring glances their prodigious defender is drawing.