FC Nantes will host Troyes in Round 9 of French Ligue 1 fixtures. We have a comprehensive preview of this game as well as the best free predictions by Football Whispers. We have also sampled the best UK bookies with the best odds for this game.

Our Free Match Predictions for Nantes vs Troyes

Promoted side, Troyes, has earned only one victory in the top flight since their promotion to Ligue 1 this season. And with FC Nantes seemingly shaky once against despite a strong start to the new season, we expect a thrilling fixture between these teams on Sunday. The following are our best three picks for the big game:

Nantes to get back to winning ways

This fixture should be easy for FC Nantes even though both teams struggle with shaky defences. The hosts have 2W and 2L in the first four home matches while Troyes has 1W, 1D and 2L away from home. Moreover, Nantes defeated Troyes in the last four meetings and all the victories came with a clean sheet. Troyes only victory at Nantes in the last 10 trips was a 1-nil back in January 2011.

We are tipping a one-sided scoring fixture when Nantes hosts Troyes on 3rd October 2021. The hosts won the last four meetings with a clean sheet. Moreover, we expect a less entertaining and low-scoring match.

Nantes to open the scoring

FC Nantes is our favourite side to open the scoring in this game. They have scored more goals than Troyes so far. In the last five meetings, FC Nantes scored the first goal.

We put together top UK bookies with the best odds for this game and the latest team stats in the tables below.

Match Preview: Will Nantes get the Fifth Victory in a Row against Troyes?

Nantes defeated Troyes in the last four encounters and is unbeaten against the visitors in the last five meetings. While it has been more than three years since the host played against promoted side, Troyes in Ligue 1, we expect an exciting match when these teams meet again on Sunday. The hosts lost 3-1 to Reims last time out, a result that came on the back of two consecutive victories. In the last 20 encounters, Nantes recorded 10W and 4D against Troyes while the visitors recorded 6W. Based on these stats, we expect a fairly even game. Troyes is winless in the last three games, and only boasts one victory since their promotion to top flight this season 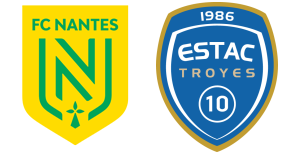 When was the last meeting between Nantes and Troyes?