Lyon and Nantes will square it in the Round 37 of French Ligue 1 2021/22 season on 14th May 2022. Our tipsters at Football Whispers have put together a comprehensive preview of this game in this post and it includes free predictions and the best odds.

Olympique Lyon defeated Nantes 1-0 in the reverse meeting. However, Nantes could prove a hard nut to crack in this second duel of the season after a strong showing in recent matches. Will Lyon complete the double against Nantes this season? Our best free tips for this game are:

Lyon and Nantes follow each other on Ligue 1 table at positions eight and nine respectively. We expect away victory or at least a draw for the visitors in this match. Nantes is undefeated in four games and lost only once in the last eight games. On the other hand, Lyon has been inconsistent lately, losing three of their last 8 games.

Nantes has a better record in the last 8 games than Lyon. Backing the visitors to score first goal is, therefore, sensible. Lyon lost 3-2 against struggling Metz, a match that highlighted their defensive problems and in which Thiago Mendes was sent off.

For the latest team form, H2H stats as well as the best odds sampled from leading UK bookmakers, see the tables below.

In the current season, Lyon is ranked 11th in conceding goals, having leaked an average of 1.3 goals per game. The hosts defeated Nantes in their last four meetings and hope they can keep that record going. Moreover, Lyon has created the second highest number of goal scoring chances this season (71).

On the other hand, Nantes is 8th in goals leaked after conceding an average of 1.2 goals in every match this season. The visitors are tenth in shorts per match, averaging 4.0 shots. The players to watch in this duel on both ends are Dembele of Lyon and Muani of Nantes.

While Lyon are the bookies favourites, the hosts have been inconsistent in their performance, a record that could see them face challenges against resurgent Nantes. Nantes is undefeated in their last four games. The visitors won the France Cup trophy after defeating Nice in the finals. We thought excitement from the cup victory would have denied Nantes victory in the last game but they disappointed us to win 2-1 against Rennes.

So, how will Lyon and Nantes lineup against each other? Our best predicted lineups for this game are: 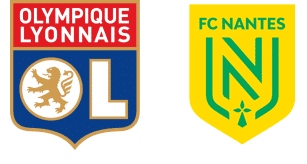 Who will referee Lyon vs Nantes?

Florent Batta will be in charge of the game

What is the kick off time for Lyon vs Nantes?

Groupama Stadium in Lyon, France will host the game.