Nantes will host Bastia at Stade de la Beaujoire for France Cup Quarterfinals on 10th February 2022. We have a detailed preview as well as the best predictions for this match in this post.

Based on stats from the last 20 meetings, Nantes and Bastia matchup has been a tough duel. Out of previous twenty encounters, nine games ended in a draw, 6W for Nantes and 5W for Bastia. Our best predictions for this Cup fixture are as follows:

We are backing Ligue 1 side, Nantes, to win this game. Antoine Kombouare’s men have been on a path of rediscovering themselves after surviving relegation last time. And while this matchup has never been easy for either side, playing at home against a Ligue 2 outfit should hand Nantes some advantage in this game.

Our second prediction for Nantes vs Bastia is fewer than three goals at full-time. This match pits two teams that have registered more draws than winnings between themselves. And given that the winner will progress to the semifinals of France Cup, a tough duel will likely yield few goals in this game.

The following are some of the best odds for Nantes vs Bastia handpicked from top UK bookies. Also, see the latest stats and H2H details in separate tables.

While the visitors will have all players available for this fixture, Nantes will be without a number of players for this France Cup quarterfinal. A notable Nantes absentee is central midfielder Cyprien who remains sidelined with COVID. Coulibaly, Castelleto and Traore have been away on international duty and will need some time to rest hence unlikely to feature in this game.

The winner in this match will face either Monaco or Amiens. Notably, Nantes head coach has never lost to Bastia’s Regis Brouard. The hosting manager boasts 1W and 3D, a record that further highlights that this match has never been easy. Given that nine draws were registered between these teams in the last twenty meetings, 6W and 5W for Bastia, we expect another show of might when these teams meet on February 10th 2022.

The last meeting was in 2017, a Ligue 1 meeting that ended 2-2. Moreover, there has not been a cup fixture between Nantes and Bastia in recent memory dating back to 1997. 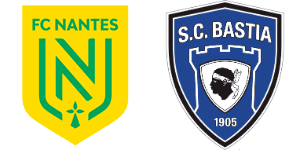 Who will be the referee in this Cup fixture between Nantes and Bastia?

When is the match taking place?

Who will the winner in this match face in the France Cup semifinals?

Nantes/Bastia will face Monaco or Amiens in the Coupe de France semifinals.