“His status as the most successful Leicester City manager of all time is without question,” the Foxes said in their statement to announce the sacking of Claudio Ranieri.

“However, domestic results have placed the club’s Premier League status under threat and the board reluctantly feels a change of leadership, while admittedly painful, is necessary in the club’s greatest interest.”

After winning the title, the first in the club's history, the Italian was never going to repeat his achievements. But no-one expected the collapse which followed.

Less than six months later, Nantes, with the help of the league bending the rules – normally coaches need to be aged under 65 years old – appointed him as their new manager.

Les Canaris had enjoyed a resurrection under Sergio Conceicao, but the former Portugal international was lured to Porto’s vacant post.

The affable Ranieri was still well thought of from his previous spell in Ligue 1 when he took Monaco from the second division to the top tier and finished second behind Paris Saint-Germain during their first second back.

His arrival didn’t go as planned when they were ripped apart 3-0 by Lille on the opening day of the new campaign. Yet, the fortunes of both sides couldn’t be more different. Les Dogues sit amid a relegation battle whereas Nantes, after 24 games, are fifth.

They may not be fighting for the title, or even close to pushing Lyon for fourth-place, but their position is outstanding achievement.

Although 11 points behind OL, les Canaris are fighting with Montpellier, Nice, and quite a few others for the coveted fifth spot.

With PSG and Monaco reaching the Coupe de la Ligue final, both will qualify for Europe and will send another team to the Europa League.

After the 2-1 win over Toulouse, Nantes president Waldermir Kita appeared on French TV and was asked about the difference between the managers who had appeared on the sidelines during his tenure.

“Do not compare Mr Der Zakarian with Mr Ranieri,” he said when asking about the Armenian boss who spent ten years at the Stade de Beaujoire.

“He is not at the same level. You are comparing the highest level with one which is a little lower. In 2016, Ranieri was elected as the best coach in the world, excuse me, but you’re comparing a Mercedes with two horses.” 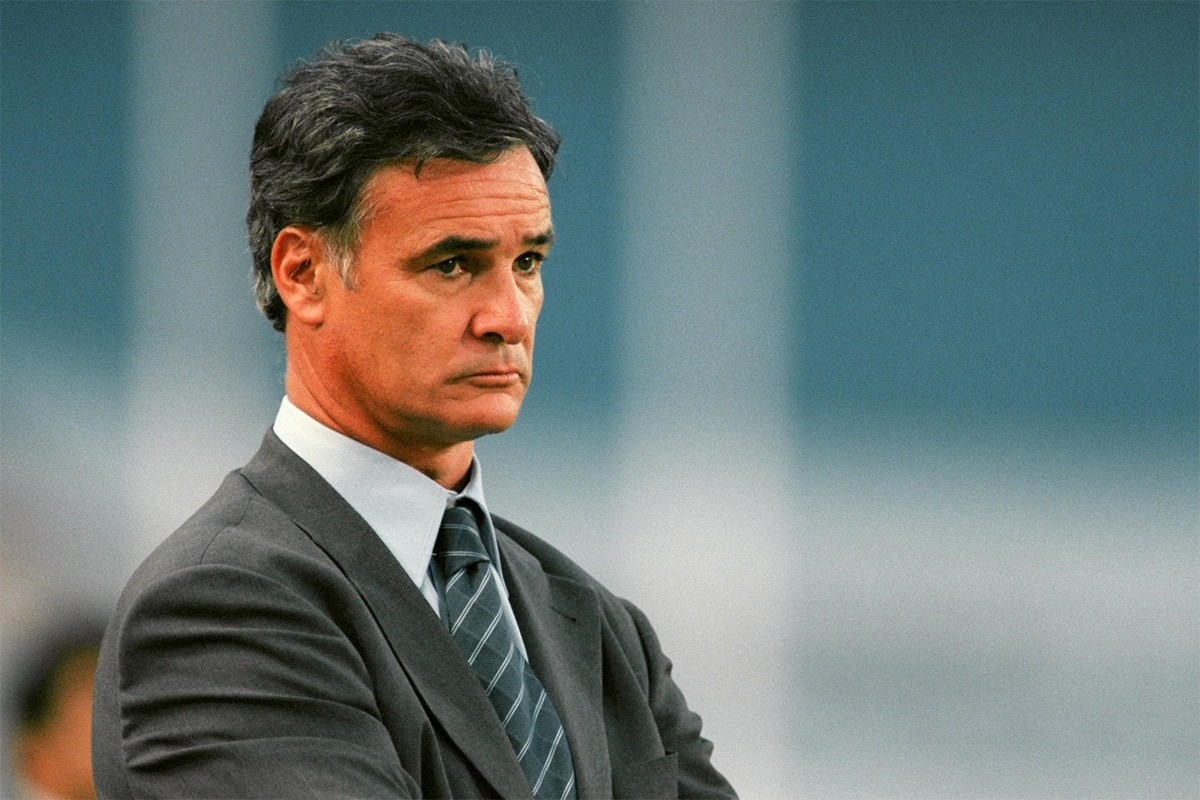 After four years in Ligue 2, Nantes had found the expectations and increase in competition difficult. Finishing 13th and 14th twice were good, but far from spectacular results. Conceicao’s reign started slowly but saw them rise to seventh, eight points behind Bordeaux and the last Europa League spot.

With some big-name teams ahead of them, progression up the ladder was always going to be a big ask for any new coach.

Ranieri’s style of football has seen the Loire club sit as high as third, but fifth has been theirs consistently throughout.

Over a small sample of games anything is possible. But with only 14 fixtures left, their form has levelled out. They are still riding high, but still the “how” of what they have done is baffling.

“No, we are not the new Leicester”” Kita explained in an interview with Il Messaggero.

“Ranieri is a man of character, with a big personality and grinta! He managed to establish an excellent rapport with the players in a very short time.

“When we have a problem, we say things to our faces and the criticism he receives about the game he plays don’t bother him. He even tells me: I play Italian, we play defensive football!”

For the fans who pack out the Beaujoire, his style is far from pretty, but it has echoes of his success at Leicester, just without Jamie Vardy and Manchester City transfer target  Riyad Mahrez.

Nantes have scored just nine goals at home this season, which is the fewest in Ligue 1; on the road, they have scored 15 times. Overall, they are ranked 13th, but their counter-attacking style is better suited to life away from home.

Only Troyes have spent less time on the ball this season, but Nantes’ 45 per cent possession doesn’t change regardless of whether they are home or away. They only complete 73.6 per cent of their passes – again, the worst in the league.

That shouldn’t translate into a European appearance, but they are still one of the favourites to finish in the top five.

You may not agree with Ranieri’s methods, but because it was worked it’s a plan he stuck with home or away.

They average 12.5 shots per game, a figure which gives them the eighth-best average in Ligue 1 for home teams and, impressively, the sixth-best on the road.

What they do extremely well is get pressure on the ball, better than any team in France. Regardless of formation, and the Italian has gone with 4-4-2, 4-2-3-1, 4-1-4-1, they always get to the man in possession quickly.

Winning 20.8 tackles per game is more than any other club in Ligue 1. Strasbourg, Marseille and Caen come close, but no one does it with as much team precision as Ranieri’s men.

They are allowing teams to have more shots per game, up from 11 to 12.5, but that follows a league trend. Amazingly, last season they were 16th in this category, but now they are 11th. Others have become way worse.

Just like Burnley's success story, it’s where Nantes let you shoot, and the quality of chances they allow which has seen them find success.

Playing against Monaco earlier in the season, the home side won 1-0 thanks to an injury-time winner, but they limited the champions to just nine shots on goal, and just one on target.

Their structure is demonstrated at the end of the first-half. Radamel Falcao gets down the channel, but the Nantes defence are organised and well-positioned. As soon as the Colombian forward turns back to find support, the shirts in yellow swarm on possession. 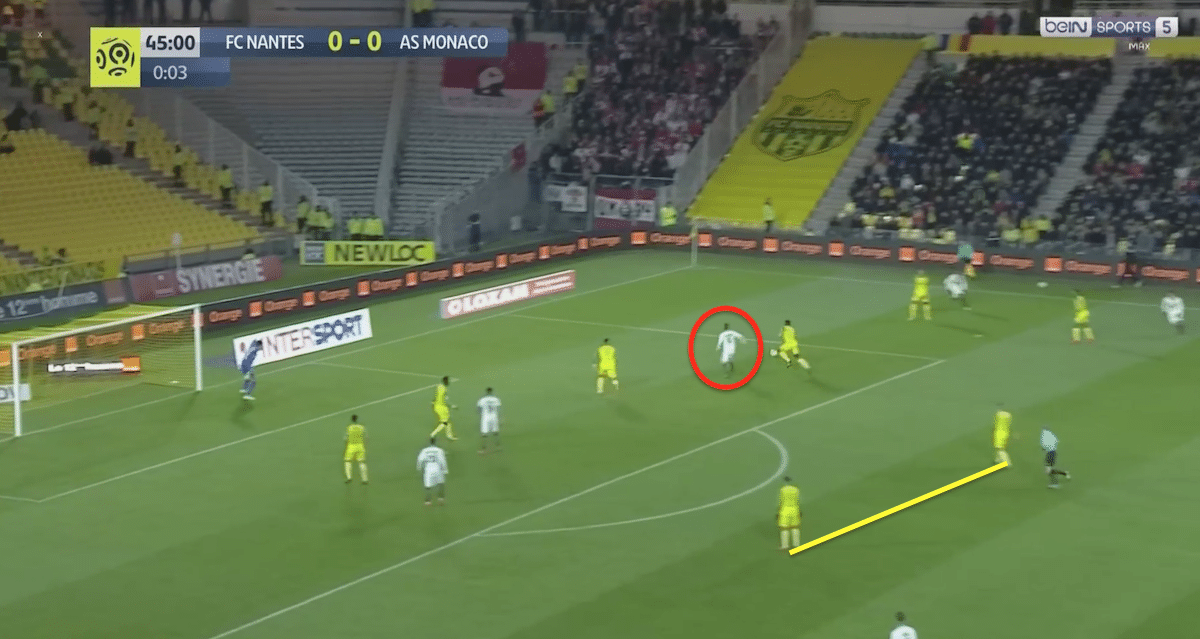 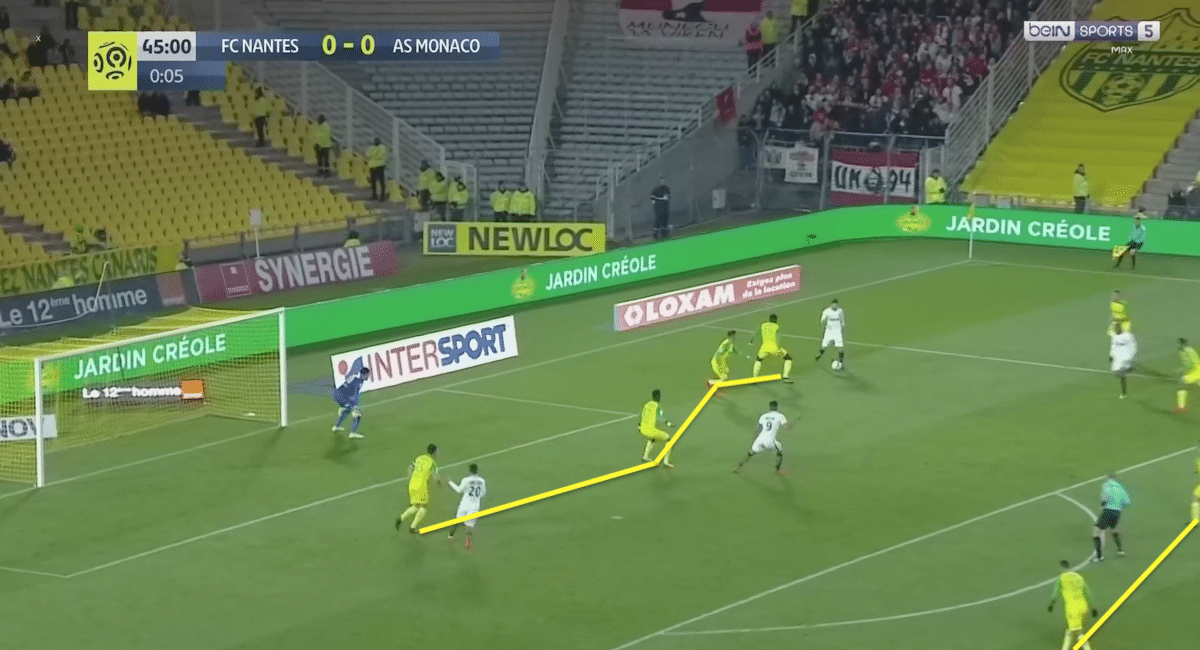 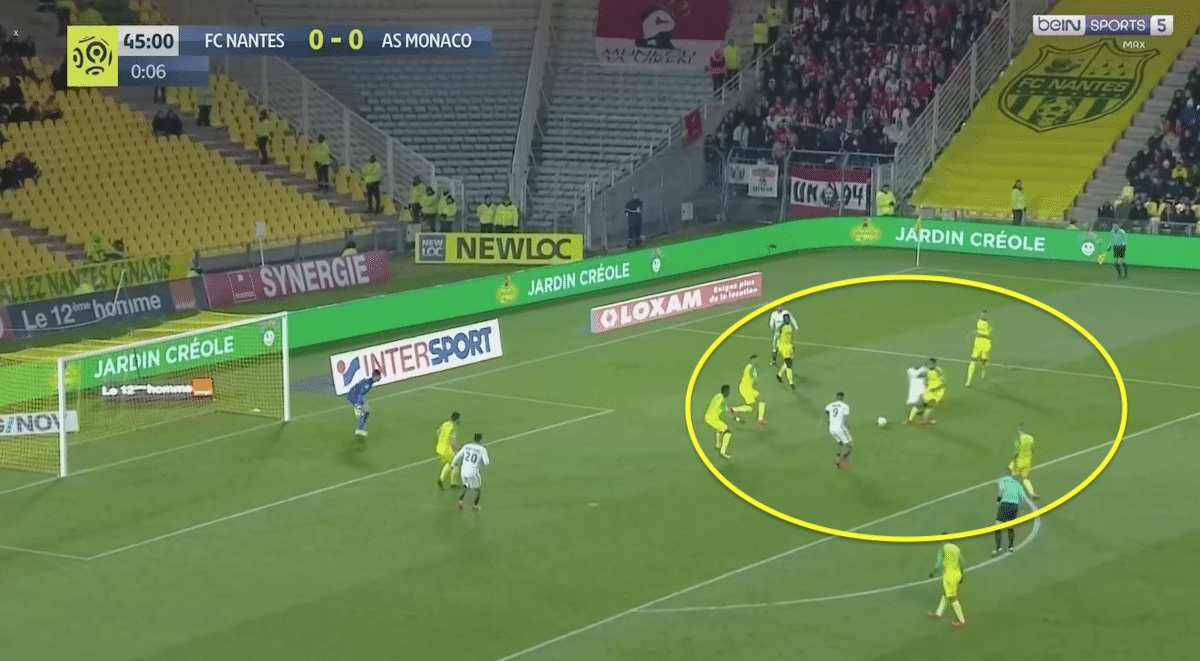 They allow Monaco to get off a shot, but it’s blocked inches from the edge of the box.

This is what they do so well. Getting bodies in the way, be it tackles, blocks, interceptions – any way they can.

One of the biggest issues Leicester had was that outside of the main XI, there was little rotation. But things seem to have changed at Nantes.

This season, Ranieri has started 24 different players, utilising the weapons at his disposal. It shows in the statistics too. Although they lead the league in tackles, only Valentin Rongier ranks in the top ten of tackles won per 90 minutes, but they do have four players in the top 50.

Diego Carlos, Andrei Girotto and Lucas Lima join the Frenchman. That’s a centre-back, centre-midfielder and left-sided defender; showing the willingness across the team to put in the required effort.

Last season, their Expected Goals Against stood at 44.62, conceding 54, this season they are exactly where they need to be, letting in 24 times with an xGA of 23.7. Their xGA per 90 has dropped from 1.157 to 0.98, improving and already impressive record.

Once against Ranieri has taken a rag-tag bunch of players and turned them into an impressive, cohesive unit.

It’s been 16 years since Nantes represented France in a European competition, far too long for a once great and iconic club.

It may not be all Ranieri’s doing, but he is the catalyst of their success. If they hold off advancing forces to finish fifth, the loveable Italian will be a hero, one deserving of a column next to Louis XVI in the city's Place Foch.