In seven seasons as a Manchester United player, Nani won the Champions League, four Premier League titles and two League Cups. He played 230 games for the club, scoring 40 goals – many of which were utterly spectacular – and provided 73 assists.

Yet the abiding memory most fans hold of Nani's time in England is one of unfulfilled talent, of an expensively acquired youngster who promised much and delivered little.

But history has been cruel to Nani. The Portuguese winger, having also come from Sporting Lisbon and shared a penchant for a step-over, suffered from being billed as the next Cristiano Ronaldo, an unfeasibly high bar.

Was he frustrating at times? Sure, but Nani was no flop.

In his own right, Nani developed from an obviously gifted attacking player – blessed with tremendous pace, an unpredictable dribbling style and a rapier shot from distance – to, for a sustained period after Ronaldo's departure for Real Madrid, United's most reliable attacker. 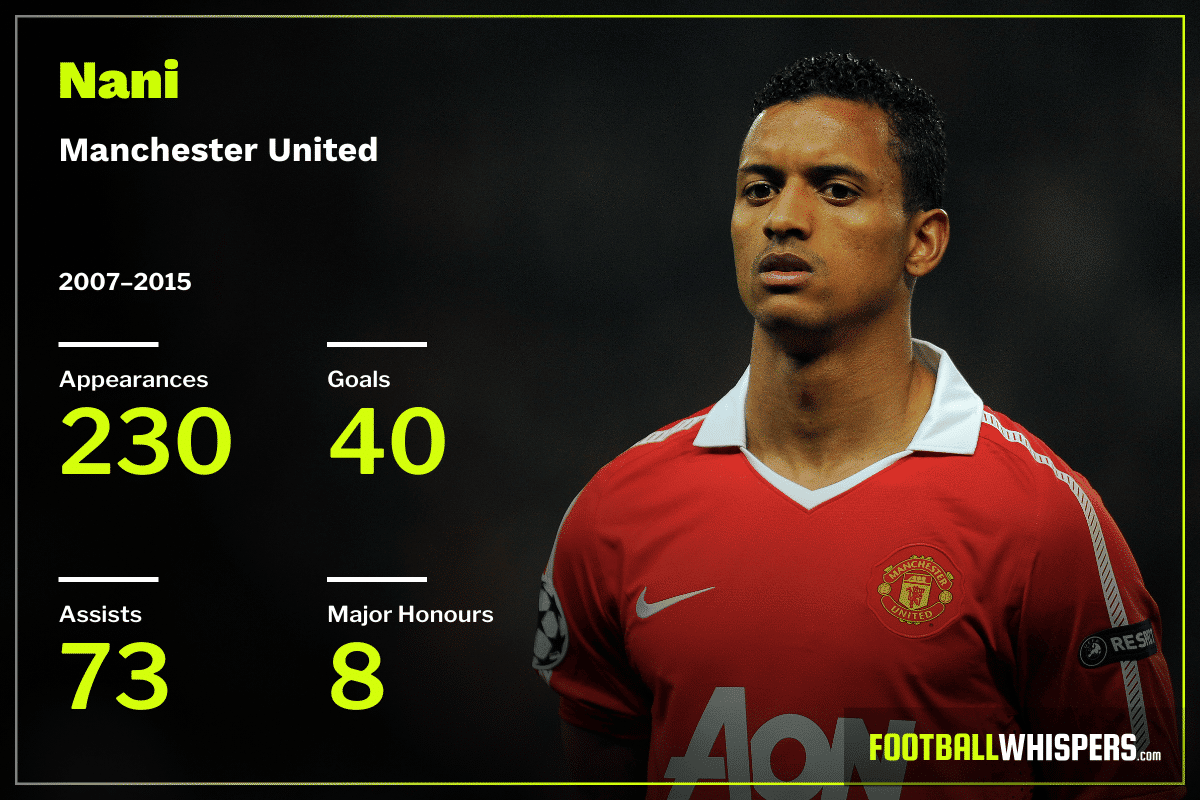 Nani was just 20 years old when he joined United in the summer of 2007, arriving alongside Brazilian midfielder Anderson, who was signed from Porto. The Red Devils, per the reporting at the time, forked out a total of around £30million for the pair, with Nani accounting for just under half of that sum.

The Portuguese forward, who lived with compatriot Ronaldo for the first couple of months after arriving in Manchester, started 33 times for Sir Alex Ferguson's men in his first campaign with the club, capping the season with an extra-time cameo in the Champions League final against Chelsea, coolly netting his spot-kick the shootout victory.

Although he was yet to attain a level of consistency – much like Ronaldo's early years with the club – Nani shone brightly intermittently, with a virtuoso display in an FA Cup victory over Arsenal a particular highlight, his two goals and trickery signalling his vast potential.

Nani was less involved the following season, but the 2009/10 campaign saw the young winger begin to blossom. With Ronaldo now at Real Madrid and United having elected against replacing the Ballon d'Or winner with a superstar name, Nani was out from Ronaldo's shadow and able to show his full capabilities.

And the man from Amadora, a poor district in Lisbon's north-west, was in full stride between 2010 and 2012, his trademark celebratory acrobatics an increasingly regular sight as he hit double figures in back-to-back season and proved instrumental to United's run to the 2011 Champions League final. At the end of the 2010/11 season, he was named the club's Player of the Year.

There were Nani's peak years, where many of his standout moments can be traced back to – from his stunning Community Shield solo effort against Manchester City to his 25-yard rocket into the top corner against Chelsea, to a PFA Young Player of the Year nomination and Ballon d'Or shortlisting.

Nani was 13 years old when United won the Treble in 1999. After witnessing Ferguson's men dramatically come from behind to beat Bayern Munch in the Champions League final that year, the teenager told his friends he'd play for United some day.

His prophecy was met with laughter and derision, the poor neighbourhood of his youth seeming a far cry from the bright lights of Old Trafford. But he made it to the Theatre of Dreams and for a while he was among United's best players in an era of success.

In 2012/13, what would be Ferguson's final season before retirement, injuries and poor form saw Nani slip down the pecking order, making just 11 Premier League appearances. His incredibly harsh red card for a raised boot against Real Madrid in the last 16 of the Champions League meant there would be no third European Cup for the legendary Scot.

Under new manager David Moyes, it was mixed signals. Nani was awarded a new five-year contract but found himself on the fringes of the team.

“It could have been the best moment of my life but it turned into the worst,” Nani told The Guardian in 2016. “After you sign a contract like that, you think all the people will be behind you and help you. And you see the opposite. Then the stress comes.

“I was down and, when it’s like that, of course, the injuries come too. It was a bad moment. It was something that made me very down, very disappointed.”

When Louis van Gaal replaced Moyes as United's next permanent manager in 2014, Nani was told he was welcome to stay and fight for his place, but that he would be second or third choice for the wide positions under the Dutchman. He decided to leave, returning to Sporting on loan for a season before a switch to Fenerbahçe in 2015.

Nani was at least very good and often outstanding for much of his first five years as a United player. It is unfair that he is now remembered as somewhat of a disappointment.

Although his zenith was shorter than many, including the player himself, would have hoped, Nani did fulfil his potential at United. Even if he was always a terrible corner-kick taker.