Nancy welcomes a Ligue 2 opponent in a bettle for Coupe de France quarter-final slot on Saturday. Nancy made it to this stage by seeing off Rennes on spot-kicks. However, life in Ligue 2 has not been easy for the Les Chardons. They currently sit at the rock-bottom of the league table. Similarly, Amiens' hope for a top-half table finish has not taken shape following a stream of poor results. Read our review to get vital facts to inform your betting decisions on this game.

Our best picks and odd for Nancy vs Amiens

These teams recently met on three occasions in the league. Amiens dominated this fixture by garnering five points from the possible nine. Will the visitors continue their dominance in front of the opposition's backyard?

There were more goals in the second half of Nancy's last four Coupe de France games than in the first half. Nancy scored the first goals in the previous four Coupe de France games in the 78th, 64th, 64th, and 59thminutes. We expect the hosts to keep things tight in the first half because it has been their norm in this Cup. They have been able to get late goals against much stronger teams and Amiens will not be an uphill task to beat. Nancy will be happy to pounce on their opponents who conceded five goals after the 64th minutes in the last two games of Coupe de France.

This will be the fourth time Nancy meets Amiens in a competitive event. The last three games ended all square and a win for Amiens. Nancy hopes to use this platform to rub off their dismal Ligue 2 performance. Les Chardons followed a trickier path to this stage as they played against stronger Ligue 1 teams. The visitors are yet to be tested as they eased their way this stage by battling weaker oppositions. Expect a tight contest between these teams with opposing forms. Nancy has been fantastic in the Cup ties while Amiens is better off in the league table.

In the last three and only encounters between these teams, fewer than three goals were registered on two occasions. However, both teams come to this France Cup tie with a lot of inconsistencies, which makes it tricky to settle on an outright winner to carry the day. Nancy bagged LDDLW while Amiens recorded DWLWL in the last five games. There has been no winner in the last two meetings which ended 1-1 and 2-2. Notably, only one of the three encounters lacked goals on both ends. 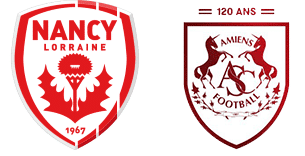 Will there be home and away games at this stage of the tournament?

No, this is a one-way knock-out stage.

Which stadium will host the match between Nancy and Amiens?

The match between Nancy and Amiens is slated to take place at Stade Marcel Picot.

Who are the managers of the two clubs above?

Albert Cartier is in charge of Nancy while Philippe Hinschberger is Amiens’ tactician.