The Daily Mail claim the Red Devils are still keen on the 29-year-old who, despite having a contract that runs until 2020, has been expected to pen a new, improved deal with the Giallorossi.

But that has not as yet happened, leading to speculation that the 2016/17 Serie A runners-up might be preparing to cash in on their dynamic star.

The most recent developments suggest that Inter Milan have also thrown their hat into the ring, as former Roma boss Luciano Spalletti looks to reunite with his former charge at the San Siro.

For his part, Nainggolan has been coy when discussing the rumours surrounding his future.

“It can be true, it can be not true, that's something that you have to know,” he said last month

“When you play football you have to make choices and last season my choice was to stay [at Roma].

“We'll see [what will happen this summer]. I'm going to go on vacation and then we will talk about it.”

The subject of strong interest from Chelsea a year ago, Nainggolan is once again being tipped for a move to the Premier League. The heavily-tattooed, cigarette-smoking midfielder may not be to everyone's taste, but his unique brand of energy, aggression and technique could breathe new life into Mourinho's United side.

As one of the best box-to-box midfielders in the world, Nainggolan has few peers, with perhaps only Bayern Munich‘s Arturo Vidal able to lay claim to being on his level of all the players who fit a similar profile.

Last season, the Antwerp-born Piacenza academy graduate produced the best form of his career. He has always been tenacious, aggressive and indefatigable, but 2016/17 saw him add a degree of composure in the final third, leading to an impressive return of 11 goals and five assists in Serie A.

United are thought to be on the lookout for midfield reinforcements this summer but rather than a player who likes to roam, following and dictating the flow of a game, they are said to be primarily in search of a dedicated defensive midfielder to shield the back four.

That certainly isn't Nainggolan. Although he is more than happy to carry out his defensive duties, shackling him to such a role would be reductive.

Chelsea's Nemanja Matić has reportedly been earmarked for that duty, with the Manchester Evening News going so far as to claim that the Red Devils have already agreed personal terms with the Serbian intentional.

However, the Independent reported recently that Mourinho may yet look to add two new midfielders to his ranks, leaving the door open to a move for the Roma man.

United also have the option of moving Ander Herrera into the defensive midfield role permanently. The Spaniard excelled in the position at times last season, demonstrating the technique and vision to conduct play from deep, the discipline to protect the backline and the anticipation to break up opposition attacks – no midfielder could better the former Athletic Bilbao playmaker's average of three interceptions per 90 minutes in the Premier League last season.

If Mourinho sticks to a 4-3-3 formation, adding Nainggolan to his midfield opposite Paul Pogba would give the Red Devils perfect balance in the middle of the park. The 28-cap Belgium international also spent a lot of time in the No.10 role last season, opening up the possibility of the Portuguese coach using the kind of 4-2-3-1 system that he has favoured in recent years.

What's more, the 29-year-old powerhouse has the ideal skillset to compliment the tools already at Mourinho's disposal. The Belgian's drive, determination and tenacity would dovetail perfectly with Pogba's creativity and unpredictability.

United were too often pedestrian last season, struggling to break down inferior teams and guilty of moving the ball too slowly. Nainggolan would remedy that.

The below sequence, taken from Roma's trip to Pescara last season, shows Nainggolan's ability to rapidly transform defence into attack, and how he can be decisive at both ends of the pitch. 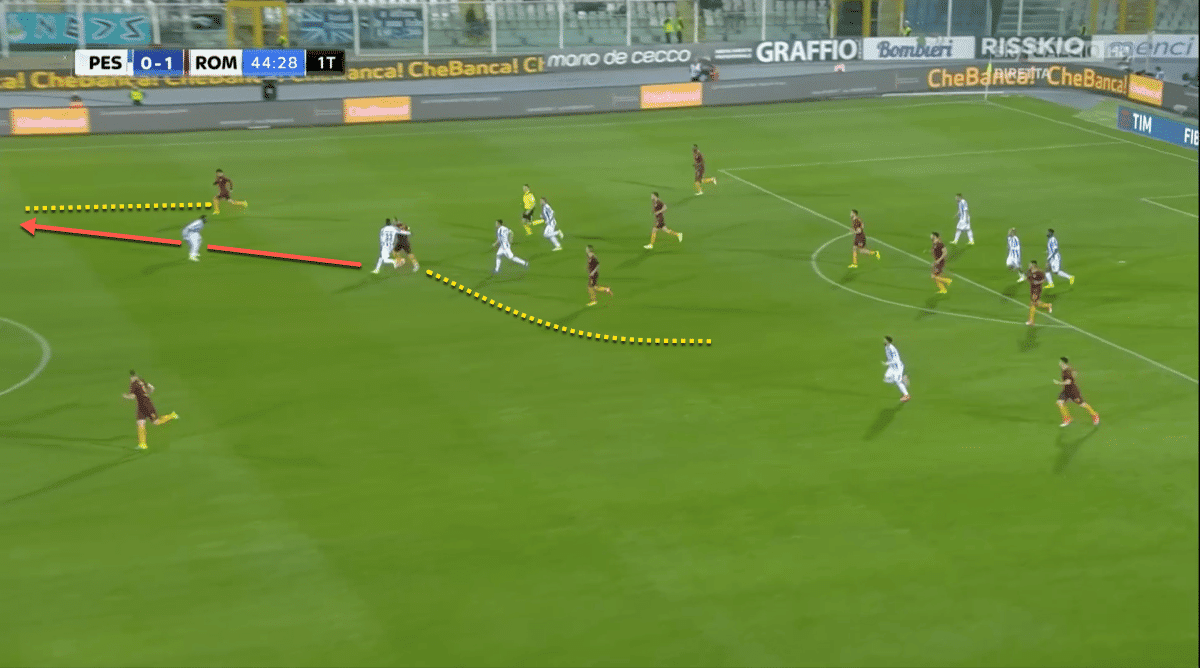 Picking up the ball on the edge of his own penalty area, Nainggolan begins to progress forward before playing speedy winger and Liverpool‘s new signing Mohamed Salah into space down the right flank. 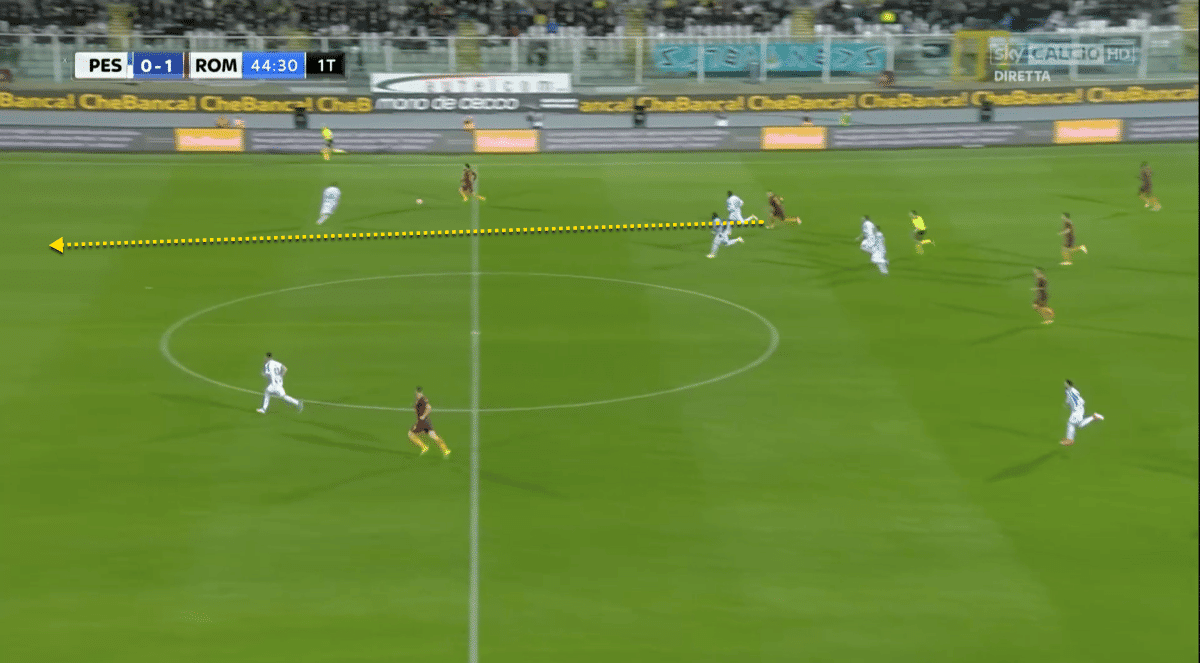 Not one to stand and admire his handiwork, the Belgian bursts forward to join the attack he has initiated. 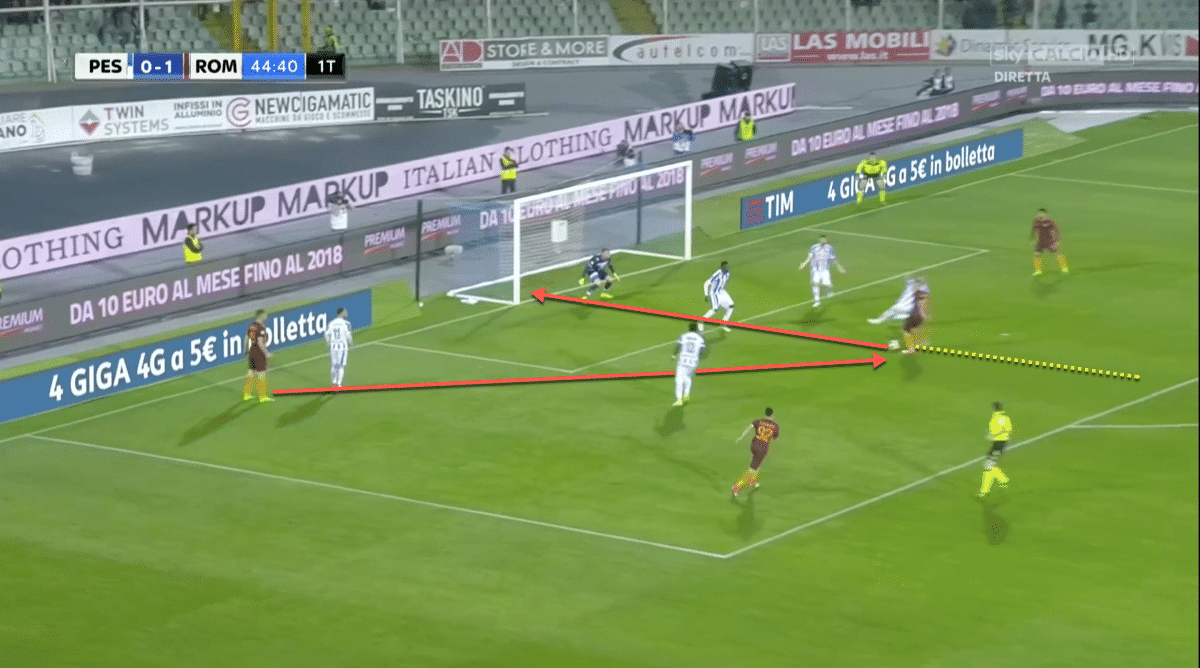 As the ball is switched across to Edin Džeko, Nainggolan times his arrival in the penalty area to perfection, picking up a pocket of space behind the retreating backline and finishing cooly when the ball is slid to him.

Ever the schemer, the Roma star's ability to conjure openings from thin air through sheer determination could also be transformative for United. 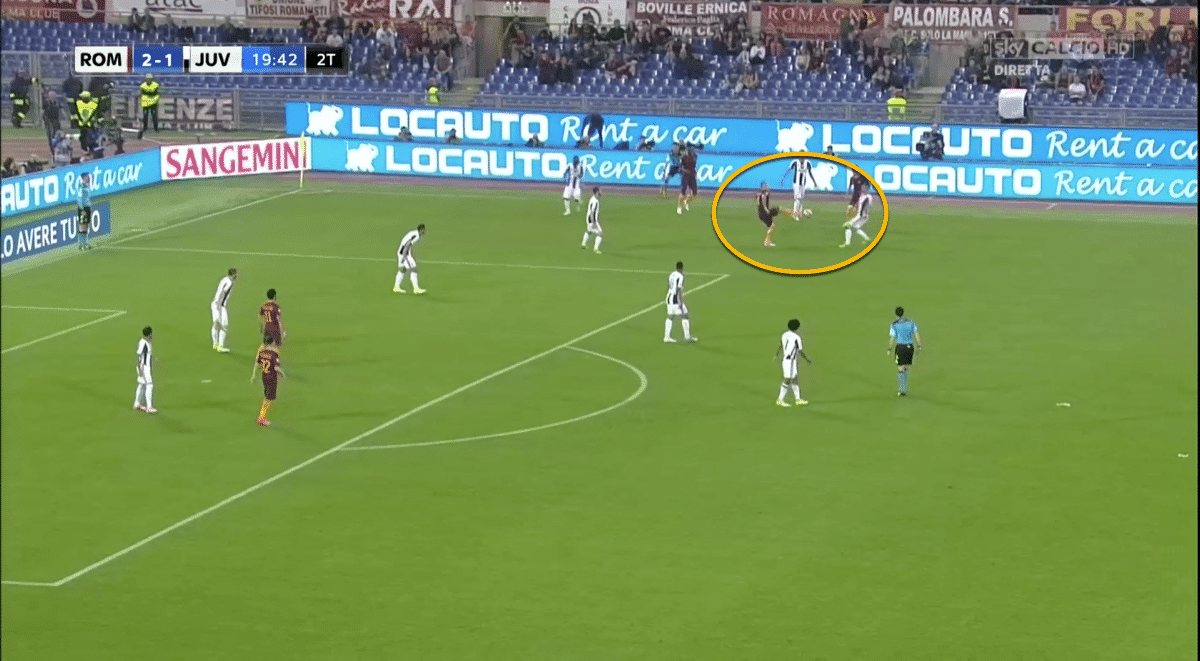 Here, against Juventus, Nainggolan nicks possession wide on the right by anticipating how the Bianconeri intend to work the ball out from the back. 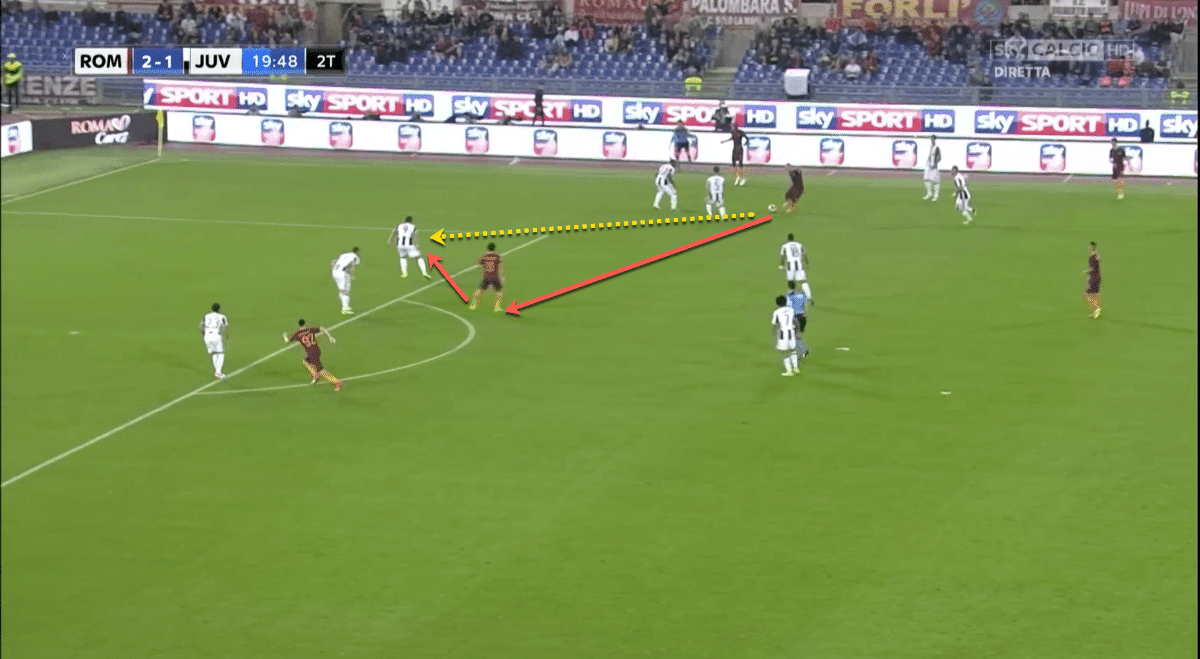 After a quick exchange of passes he finds himself with the ball back at his feet and immediately looks to create a scenario from which his side can profit. Linking again with Salah, the 29-year-old breaks beyond the ball and into the penalty area. 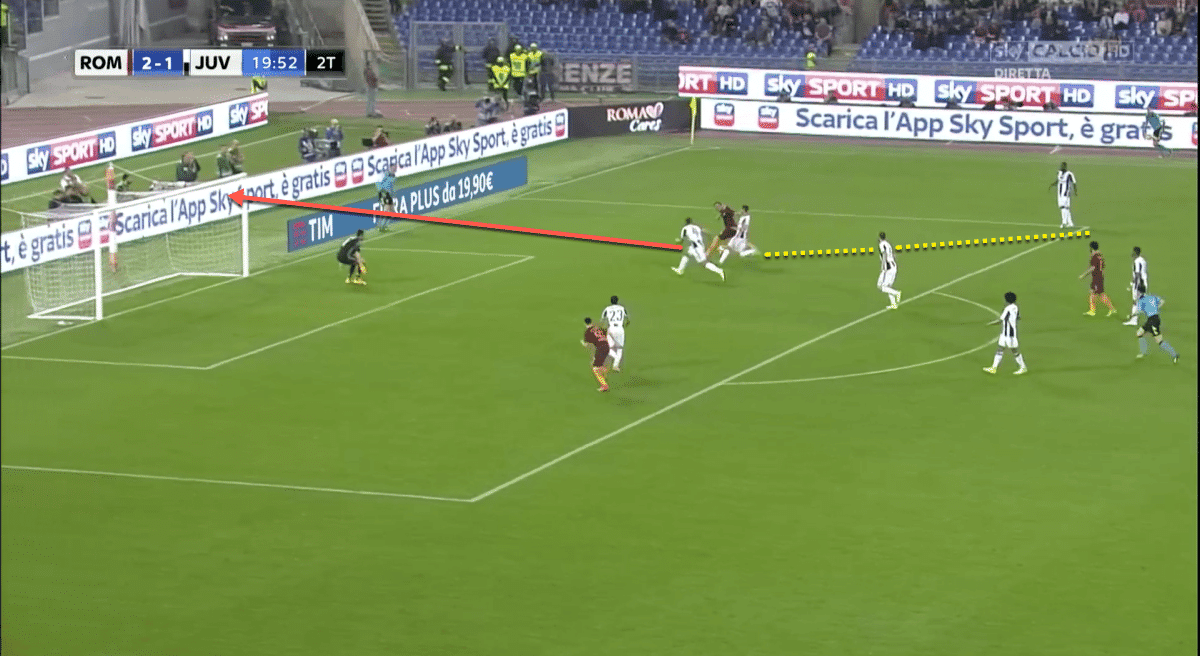 Picked out by Salah's return pass, Nainggolan thrashes the ball into the top corner.

It's this kind of tenacity and constant probing that will no doubt have caught Mourinho's eye. Never shy of engaging physically, Nainggolan would offer the kind of indomitable presence in midfield not seen at Old Trafford since Roy Keane's departure in 2005. 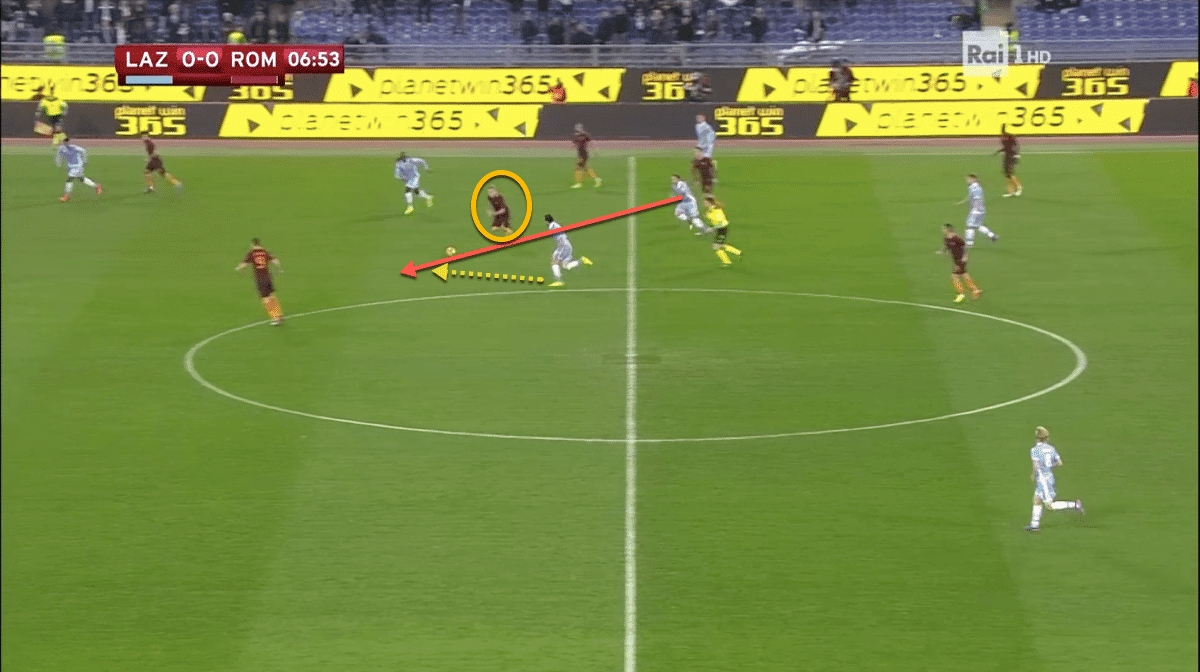 Here, in a heated Rome derby against rivals Lazio, Nainggolan, clearly relishing in the intensity of the occasion, doesn't hesitate before launching into a 50-50 challenge when Kevin Strootman's pass to him is overhit. 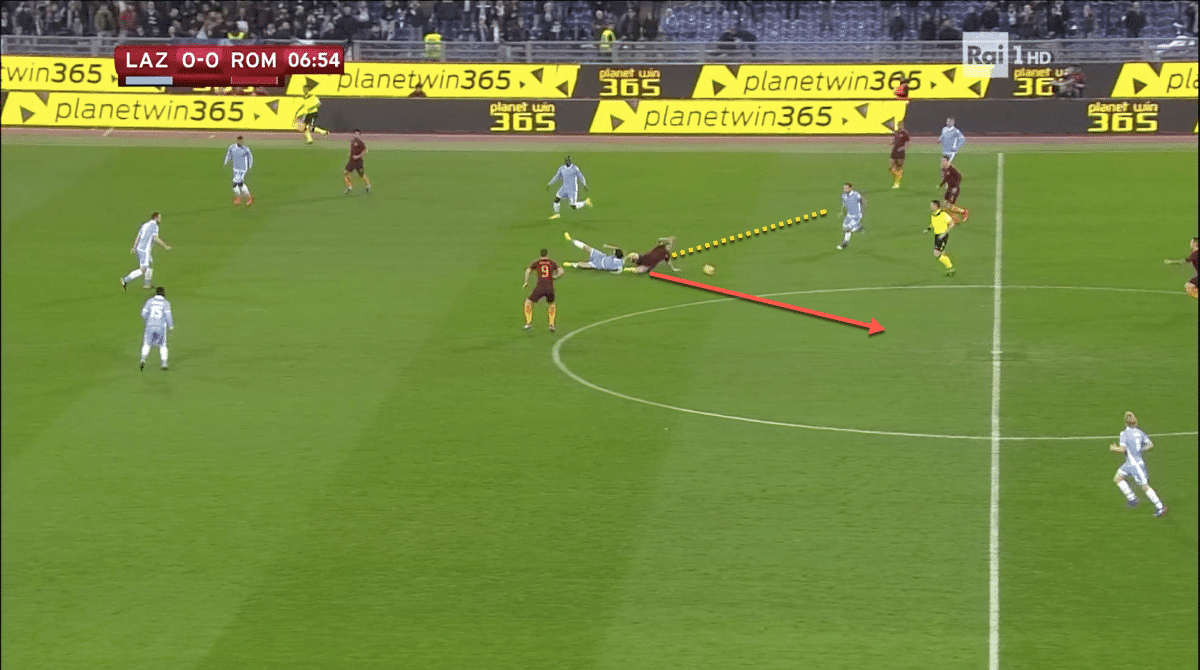 The Belgian's readiness to put his body on the line to ensure his side maintain possession pays off as he is able to get to the ball ahead of his opponent and Roma continue their forward progress.

The physical aspects of Nainggolan's game would make him a surefire hit in the Premier League and with Mourinho. But the technical side of his arsenal is not to be underestimated: he is an accurate and intelligent passer also capable of scoring the most spectacular goals from distance.

Furthermore, with so many of United‘s hopes for this season resting on Mourinho's ability to squeeze every drop of potential from Pogba, the addition of Nainggolan would go a long way towards aiding that.

The gifted Frenchman played his best football at Juventus with a box-to-box midfielder opposite him in Vidal and a playmaker – or regista – such as Andrea Pirlo or Claudio Marchisio deeper. Nainggolan and Herrera could come very close to replicating that formula.

Why A Move Could Happen

In his three full seasons with the club, Nainggolan has always seemed completely happy at Roma and enjoys the lifestyle that the Italian capital offers him. Having been in Italy since his teens and with an Italian wife, he has previously appeared reluctant to consider plying his trade elsewhere.

“Going to Chelsea would be an opportunity, as I’d improve as a player and in economic terms,” He told Nina magazine in June last year after turning down the Blues. “But money isn’t the most important thing and I don’t think I could improve my current quality of life.

“I built my home in Rome, where the sun always shines. Giving all this up would be difficult. Life isn’t just football. Can you see me in England, where it rains all the time?”

But at 29, Nainggolan will be aware his next contract will be the most lucrative of his career, and the riches on offer in the Premier League cannot be matched in Italy.

Roma will be reticent to part ways with their star player, too. But with Monchi recently installed as the club's sporting director, there is reason to believe that a sale is not beyond the realms of possibility.

The former Sevilla transfer mogul built his stellar reputation on his ability to buy low and sell high – there will not be another summer in which Nainggolan's value is a high as it is right now.

Plus, the fact the Serie A side are leading the race to side Nice midfielder Jean Michaël Seri perhaps points to the club preparing for life without their Belgian talisman.

From United's point of view, despite the fact that he is already in his peak years, signing Nainggolan would be a no-braner. Immediacy is Mourinho's obsession, and few players are as ready-made for the Premier League as the Roma man.

With his mohawk hair and snarling style, Nainggolan's punk spirit could spark United into life.