Tonight Antonio Conte will get a good look at what he could have one as long-term Chelsea transfer target Radja Nainggolan comes to Stamford Bridge with his Roma side in the Champions League.

The Blues failed to land the Roma man in each of the last two summers, and since then he has transformed himself into one of the stars of Serie A at the moment.

Tonight the Belgian midfielder will get the chance to show Conte exactly what he is missing.

Not your average footballer

When you think of footballers nowadays, with all the improvements in sports science and awareness of what player should eat, you imagine someone who treats their body as a temple; whose life is pretty much, training, matches and little else.

That is not Nainggolan.

He is almost a throwback to days long lost, where footballers would have a cigarette and a drink and no-one would bat an eyelid.

In February, the Belgian midfielder was filmed late at night in his car outside a bar, smoking and saying how much he hated rivals Juventus.

It would be a surprise to see many footballers doing that, but not Nainggolan.

In 2015, the Belgian told Rolling Stone that he considered himself to be a ‘discotheque footballer’, saying: “I have no desire to stay home every evening like other players who just go ‘home, football pitch, home, football pitch.”

And in 2014, he was left out of the Belgium squad for the 2014 World Cup because boss Marc Wilmots did not approve of his behaviour, especially his smoking.

The former Belgium manager said: “It will be [Nainggolan’s] problem if he only plays to 30 years old instead of 35.”

But eventually WIlmots gave in due to the midfielder’s quality, and made sure Nainggolan’s hotel rooms always had balconies for him to smoke on.

And letting Nainggolan live his life how he wants to was also a theme under ex-Roma boss Luciano Spalletti.

“Radja probably finds his balance by always going hard,” he said, speaking about the footage of Nainggolan filmed outside the bar.

“[Nainggolan], on the other hand, eats a lot, he runs a lot, he gives out a lot of kisses and he does a lot of everything.

“That’s how he finds his balance. But the balance is still always there.”

Where would Nainggolan play at Chelsea?

Spalletti understood how to get the best out of Nainggolan. The current Internazionale boss converted the Belgian from a defensive midfielder to a rampaging No.10 with great success.

He scored 12 goals in all competitions for the Gialloross last season and has already found the back of the net this term.

After scoring a brace against Inter in February he was hailed as the ‘perfect blend of Francesco Totti and Gennaro Gattuso’ by Corriere della Sera.

The Belgian was a target of Conte in the summer, but pledged to stay at Roma.

While he seems happy in the Italian capital for now, with players as maverick as Nainggolan, you never know where their next move may be.

Should he come to England, it will be for considerably more than the €9million Roma paid Cagliari for his services in 2015, given they reportedly turned down a €40million from the Blues last summer.

If Nainggolan were to sign for Chelsea, he would likely revert to his old position and play in the midfield two in Conte’s 3-4-3 formation.

And with the unstoppable N'Golo Kante part of that midfield two, he would battle with Tiémoué Bakayoko and Cesc Fàbregas to start for the Blues.

How does Nainggolan compare statistically? 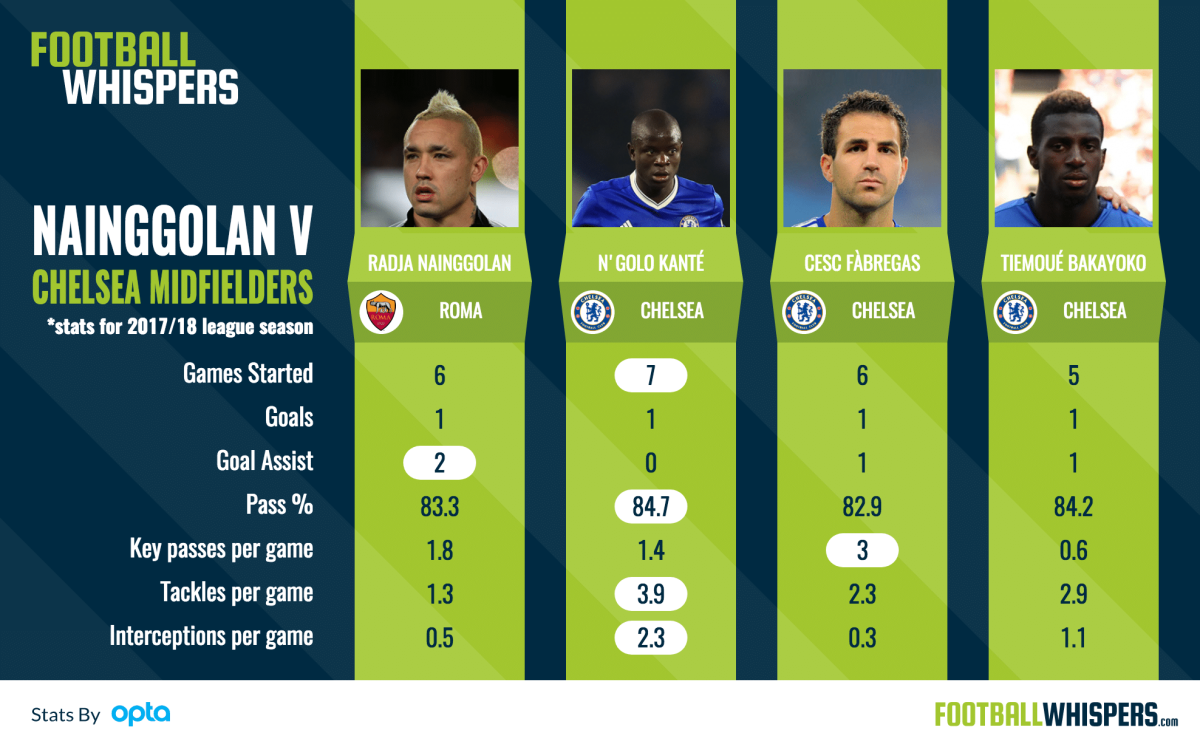 While the all-action Belgian only comes out on top in one category, it is arguably because he can perform best out of all four across a multitude of roles.

He has as many league goals as the Chelsea trio and is only just behind Kanté (84.7 per cent) and Bakayoko (84.2 per cent) for pass completion.

Nainggolan is second only to Fàbregas (3) for key passes per game bit the Spaniard is third in the Premier League to Manchester City pair Kevin de Bruyne (3.3) and David Silva (3.1) so he is way out in front.

In terms of tackles per game (1.3) and interceptions (0.5) he trails the rest but that can be attributed to the role he plays under Eusebio Di Francesco at Roma.

A risk coming to England?

If Nainggolan does decide to leave Roma and make the move to England, it would be interesting to see how he copes off the pitch.

He is by no means a Mario Balotelli, but the Italian shows the perils of not being on your best behaviour at all time while playing in England – it’s fine when you’re playing well, but after a bad game, the press aren’t averse to crucifying you for your off-the-field antics.

If the 29-year-old does end up at Stamford Bridge one day, Conte has proven himself more than capable of dealing with big characters like Diego Costa and would back himself to get the best out of another maverick.