Since making his senior Hoffenheim debut in 2015, Nadiem Amiri‘s rapidly gone about making a name for himself as one of the hottest prospects in Europe, leading to rumours of a move to Tottenham Hotspur.

However, his journey so far isn't as straightforward as his extraordinary talent might suggest it should have been.

Born in Ludwigshafen, Germany, it wasn't always obvious that the man with Afghan heritage would become a professional footballer, for as a boy, he actually preferred Karate.

“I was six years old, and my brother already played at Ludwigshafener SC,” he told Radio Regenbogen.

“I did not want to start with football, because I was actually rather the karate type. But then the coach of my brother told my mother that she should bring me to training sometimes. So I still kept doing karate training and then started with football.”

Before joining Hoffenheim, on top of playing for Ludwigshafener SC and Waldhof Mannheim, he also sandwiched his time with those two outfits with a stint with the well-renowned 1. FC Kaiserslautern. Indeed, FCK's eventual decision to release him certainly looks like a horrible error in judgment now, but their loss has emphatically worked out to be Hoffenheim's gain.

“I was dropped from Kaiserslautern. The manager didn’t want me in his plans. It was hard for me. All together I played for Kaiserslautern for five years. That said, now its motivation for me to show them what I can do,” insisted Amiri.

Joining Hoffenheim as a 15-year-old in 2012, Amiri's immense desire and ambition to make it to the Die Kraichgauer first team gave him the perfect platform he needed to turn his dreams into reality.

Upon reaching the club's Youth A side, it was there that the sensation really began to rise to prominence. Under young managerial sensation Julian Nagelsmann, who's now doing an exceptional job managing the senior team, it didn't take long for Amiri to demonstrate his exceptional ability.

Despite having to bide his time in the beginning with Nagelsmann's Under-19s, Amiri's persistence and hard work eventually paid off, as he quickly becoming an indispensable member of the side.

“With the Under-19s I sat on the bench for most of the first half of the season. We had a very strong team and the results were always good,” he mused while speaking to the DFB website.

“He [Nagelsmann] told me back then that I needed to be patient and that my time would come. He was right. In the second half of the season I was almost always in the team.”

Going from strength to strength working in tandem with the managerial hotshot, the tricky attacker continue to improve steadily and was an integral component of the team that won the national Under-19 title in 2013/2014 and finished runner-up the following season.

With Amiri making waves at the Sinsheim outfit, a first-team call up was the next logical step for him, and Markus Gisdol duly handed him his debut against Wolfsburg on February 7 2015.

It is a moment the German youth international recalls clearly. “When I found out that I was going to start, just an hour before the match, I couldn’t believe it,” he explained.

“But when you get on the pitch you forget all that and just want to give everything.”

Amiri then pushed on wonderfully, impressing whenever afforded an opportunity, as the starlet caught the eye with his blistering speed, treacherous, slightly unorthodox dribbling style and overall dynamism going forward.

He finished the 2014/2015 season with seven appearances, which gave him a terrific insight into what's needed to be successful at the highest level. Amiri candidly admitted back then that the physical aspect of the Bundesliga was something he found very challenging to cope with, proclaiming: “At first I didn’t find it too difficult, but after two or three months I began to struggle physically. My body needed to get used to the extra workload.”

It was the 2015/16 season which served as his real breakthrough campaign as he became an crucial cog in the Hoffenheim wheel. The club suffered a woeful start, which saw Gisdol sacked in October, Hubb Stevens was charged with getting things back on track.

Unfortunately their struggles kept up and when the Dutchman sadly had to step down due to a heart condition in February of last year, the club were prime relegation candidates.

But this opened the door for Nagelsmann to step up and take over the managerial reigns. At just 28, he became the youngest ever Bundesliga manager, and since his appointment, he's worked wonders with Hoffenheim. Guiding them to safety was an apt testament that he was the right man to take the club forward.

Under a coach that knows him so well, Amiri's unsurprisingly been a prominent figure under Nagelsmann's overwhelmingly successful reign so far. He made 25 appearances, four goals and four assists in 2015/2016, before featuring even more in 2016/17, with 33 Bundesliga appearances, albeit with a slightly smaller return of two goals and four assists from a more withdrawn role as Hoffenheim finished in the Champions League qualification spots.

He's started this season well so far, with a goal and an assist in his nine games.

The versatile German Under-21 international has given his manager plenty of tactical flexibility as he's capable of playing across the entire attacking line and even in central midfield. Plus, his capacity to play many different roles has seen him able to perform in game rotations smoothly.

He's developed into a key player under Nagelsmann. Of all his first-team managers at Die Kraichgauer, the 21-year-old clearly enjoys working alongside the young coach the most. Indeed, courtesy of the pair's supreme knowledge of one another's tendencies, this has seen their harmonious relationship continue promisingly into the top flight.

“I think that, under Julian Nagelsmann, we are playing our best football,” Amiri admitted.

“Under Stevens, because of our situation, it was all about sitting deep and using the counter.

“With Gisdol our focus was pressing and reacting quickly whenever we regained or lost possession. Now our tactic is to be more dominant on the ball, but also to react quickly.

“He knows exactly how the team ticks. In his conversations, he always tells us we can make mistakes.

“This is especially good for young players who are often afraid to make mistakes. 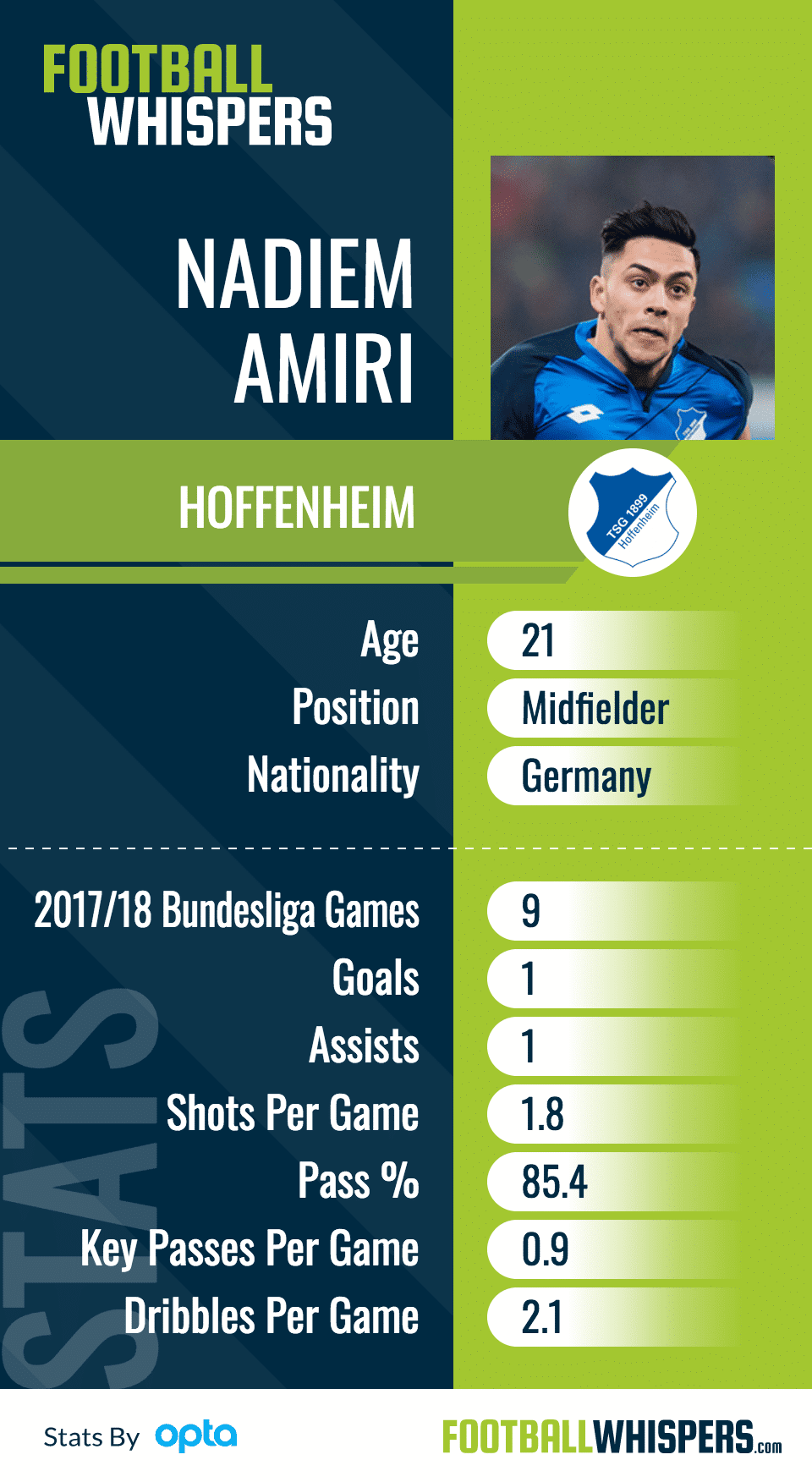 Being trusted by, not only his manager, but also his teammates, has given Amiri the belief needed to play with his customary swagger and exuberance too.

“The team is giving me the confidence I need in training,” he told the Bundesliga website.

“They say they can trust me, and it's okay to make mistakes. So in the game I'm not worried, I just try things. I have to thank the team, without them I could not play with such confidence.”

With still a massive scope for improvement, and a positive attitude to match, there's no reason to suggest the man who idolises former Hoffenheim midfielder Luiz Gustavo and Mainz 05 playmaker Yunus Malli shouldn't reach the upper echelons of the game one day.

“Above all, I want to become more effective and help the team more in the attacking third. I want to play better passes, make better decisions, create more goals and most of all become more clinical in front of goal.”

If he can fulfil all of his aforementioned goals, he'll certainly develop into one hell of a player. Like with so many wildly gifted prospects, only time will tell if he, in fact, will.