Liverpool remain favourites to land the 22-year-old Guinean international having pushed the player all summer, and the Merseysiders have already reportedly seen a £65million did rejected by the Bundesliga high-flyers.

But José Mourinho is known to be in search of midfield reinforcements ahead of the coming season and has identified Keïta as a target, with Manchester City, Juventus and Inter Milan also entering the fray.

United have been linked to moves for Nemaja Matić of Chelsea and Tottenham Hotspur‘s Eric Dier recently as Mourinho seeks a defensive midfield achor to shore up his side in the middle of the park.

But the Red Devils have been frustrated in their efforts to sign both players, with Chelsea said to be unwilling to allow Matić to move to Old Trafford and Spurs determined to hang onto Dier.

Which means United will have to look elsewhere in their attempt to bolster their midfield option. Fabinho and Julian Weigl have both been named as potential United transfer targets but Football Whispers has been informed that Keïta is also under consideration.

Stylistically, Keïta differs greatly from Matić and Dier who are more typical midfielder destroyers. Despite misguided comparisons to N'Golo Kanté, the RBL star is a box-to-box midfielder who is equally effective in the attacking, defensive and transitional phases of play.

If Mourinho wants a specialist defensive midfielder, Keïta isn't the man for the job and limiting him to such a role would be to negate at least 50 per cent of what makes him such a special talent.

But the fact United were also reportedly keen on signing former Chelsea transfer target Radja Nainggolan this summer gives reason to believe that Mourinho does indeed have his eye on a player of Keïta's profile.

There are many differences in Nainggolan and Keïta's games but they are both, in essence, box-to-box midfielders. Bringing such a player in would likely necessitate Ander Herrera switching into the deep-lying playmaker's role in which he excelled when deputising for the ageing Michael Carrick last term.

The Spain international is perhaps more comfortable with a slightly more offensive remit. But with an average of three interceptions per 90 minutes in 2016/17 – a return no Premier League midfielder could better – a pass completion rate of 87.6 per cent, and a team-high six assists, Herrera showed he has the requisite anticipation, technical quality and vision to succeed in the position.

What Keïta Would Add To The United Midfield

The comparisons that are often drawn between Keïta and Kanté seem to stem largely from the pair's size and ethnicity, but the Leipzig man is certainly capable of covering ground and breaking up play like the Chelsea star.

However, he offers much more in attack than the Frenchman, as evidenced by his return of eight goals – more than any United player bar Zlatan Ibrahimović – and seven assists – better than any of Mourinho's men could muster – in the Bundesliga last term.

A goal threat from all ranges, Keïta demonstrated his ability to perfectly time runs into the penalty area last season. 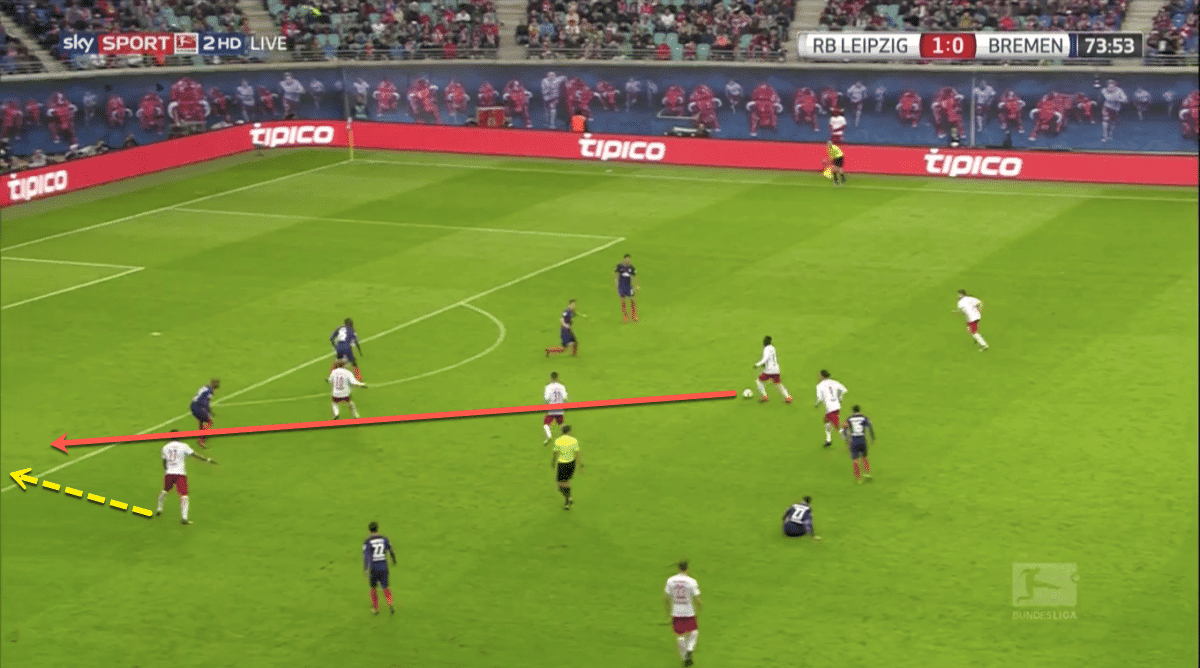 In the above image we see Keïta in possession centrally in the final third and spreading the play out wide. 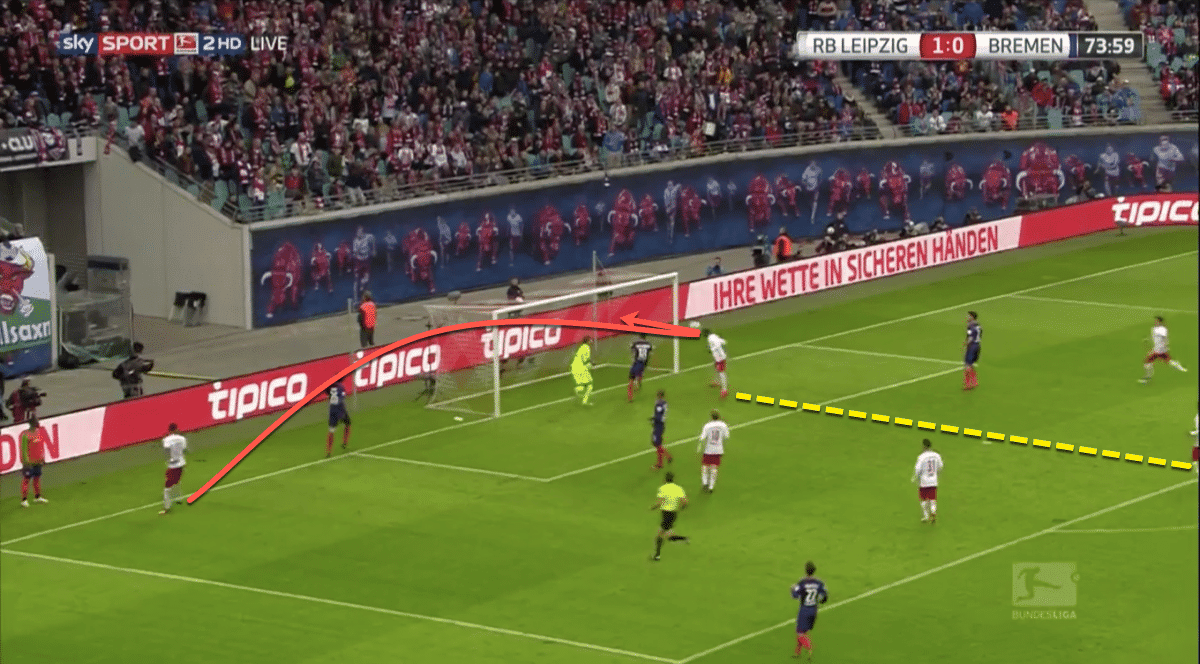 Rather than stand and admire his perfectly-weighted pass, he continues his run into the danger zone and arrives at the back post, right on cue, to nod the ball into the net.

The 22-year-old can also hit them from distance too, as his wonder-strike against Freiburg showed. 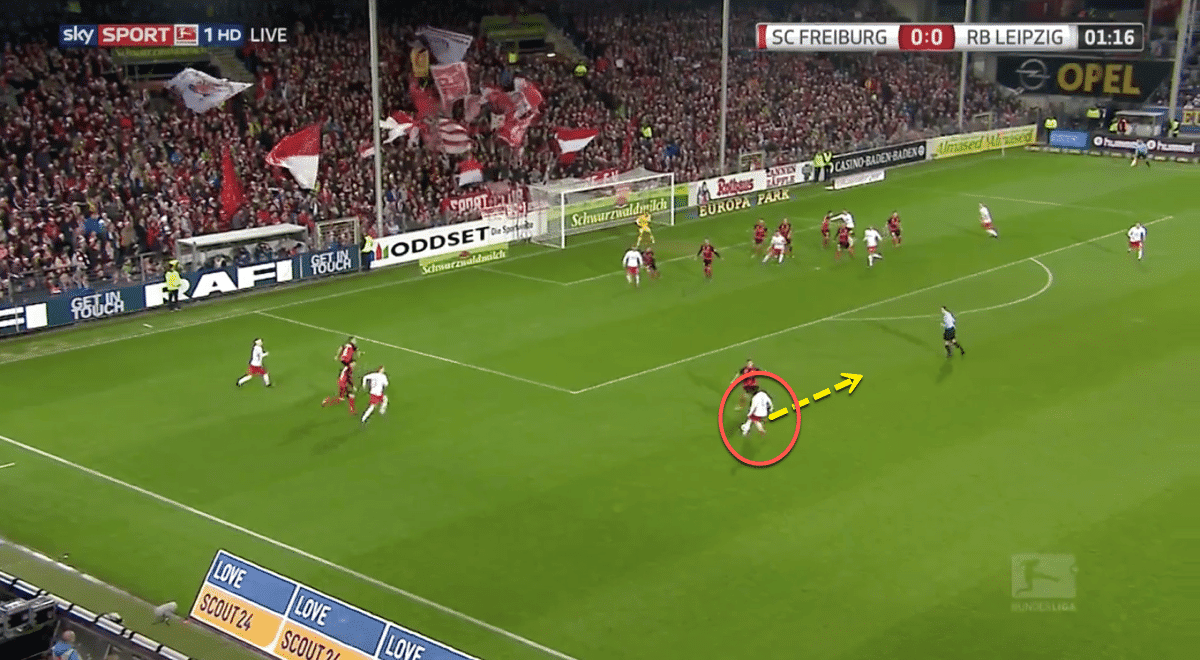 Collecting the ball in the inside-left position after a short corner, Keïta feints away from his marker with a drop of the shoulder, moving infield into shooting range. 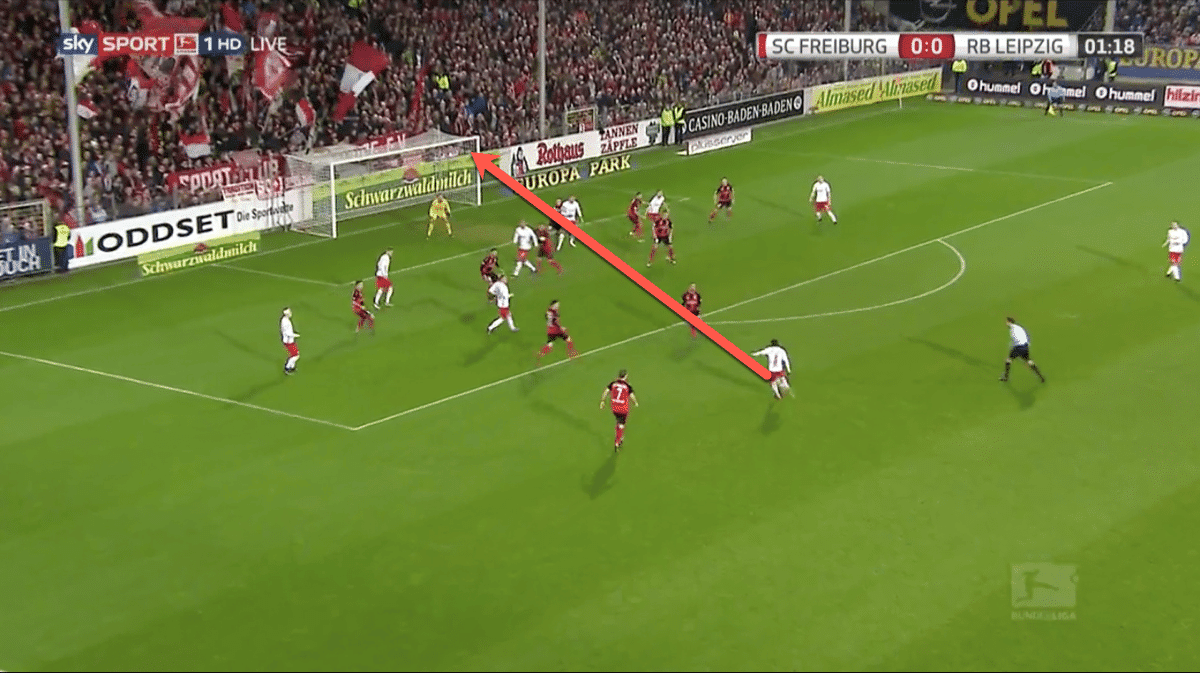 From there, he arrows a rocket of a shot into the top corner of the net, leaving the goalkeeper without a prayer of saving his effort.

Keïta also has tremendous vision and the technique to produce chance-creating passes many players wouldn't see, let alone attempt – a trait he shares with Paul Pogba. 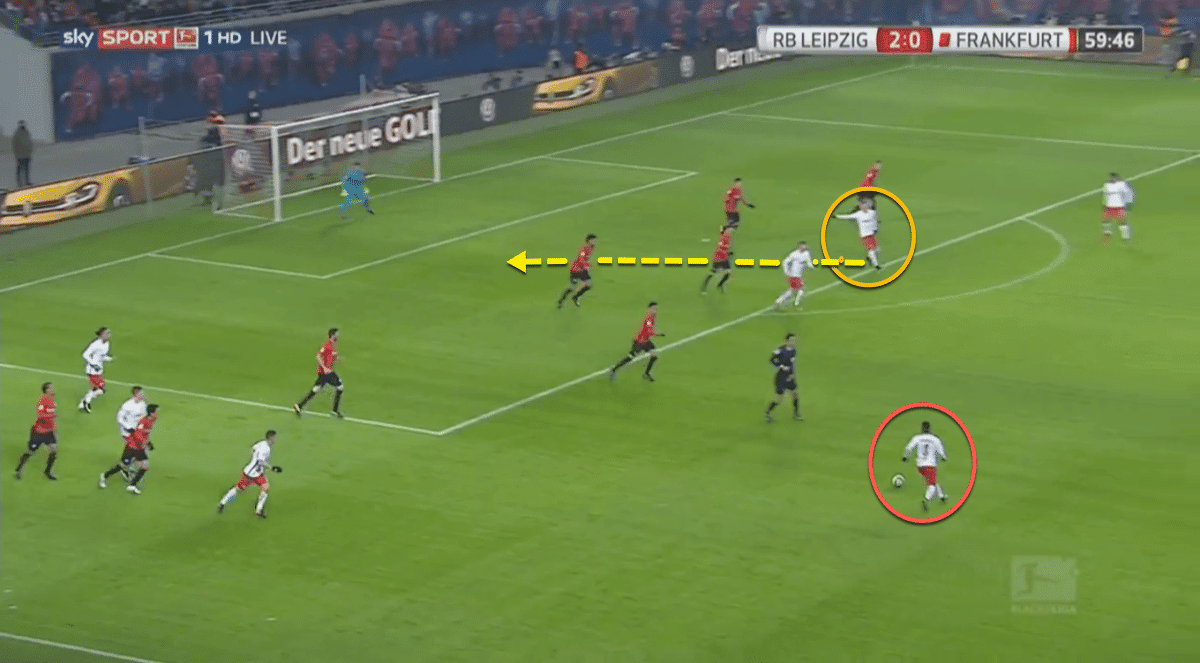 Here we see Keïta with the ball at his feet on the edge of the final third as the opposition defence looks to push out. He identifies the run of a team-mate moving into the penalty area and looks to locate him with a pass. 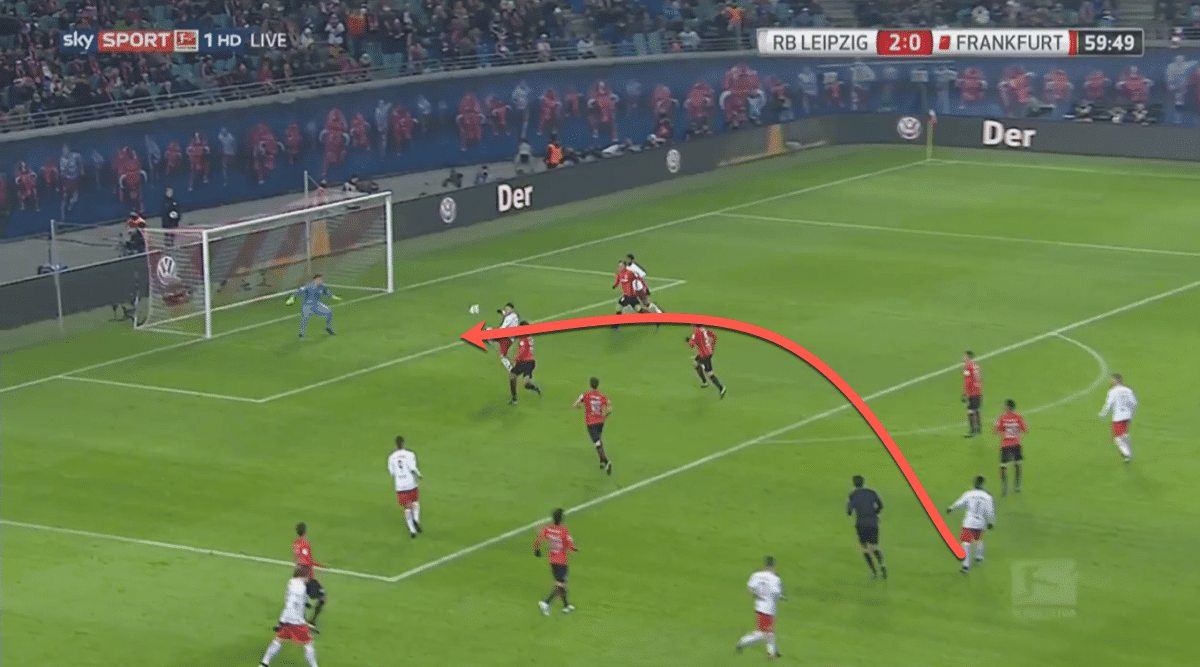 With impeccable timing Keïta manages to pick out his colleague on the edge of the six-yard box, creating a scoring chance and ensuring he chose the opportune moment to release the pass, keeping the attacker onside and catching the defence as they pushed up.

One of the most striking aspects of Keïta's weaponry is his ability to play accurate forward passes on the run. This is key to the former Red Bull Salzburg midfielder's ability to help his side quickly transition from defence into attack. 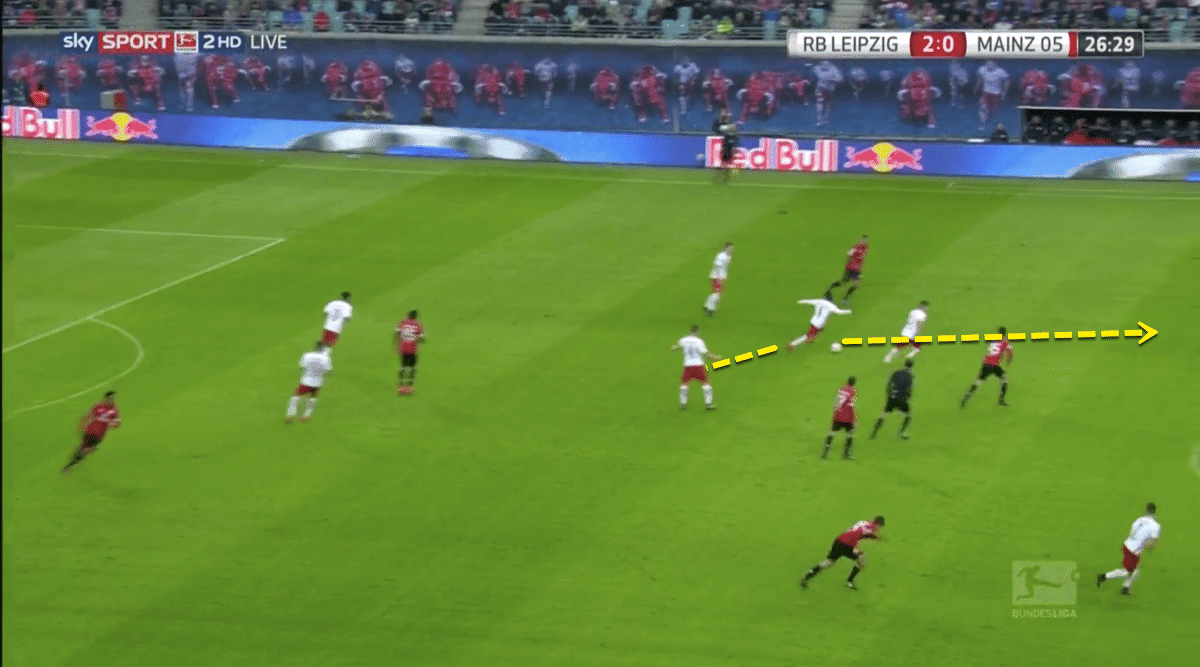 In the above image, Keïta takes possession deep inside his own half and immediately looks to get Leipzig on the attack. 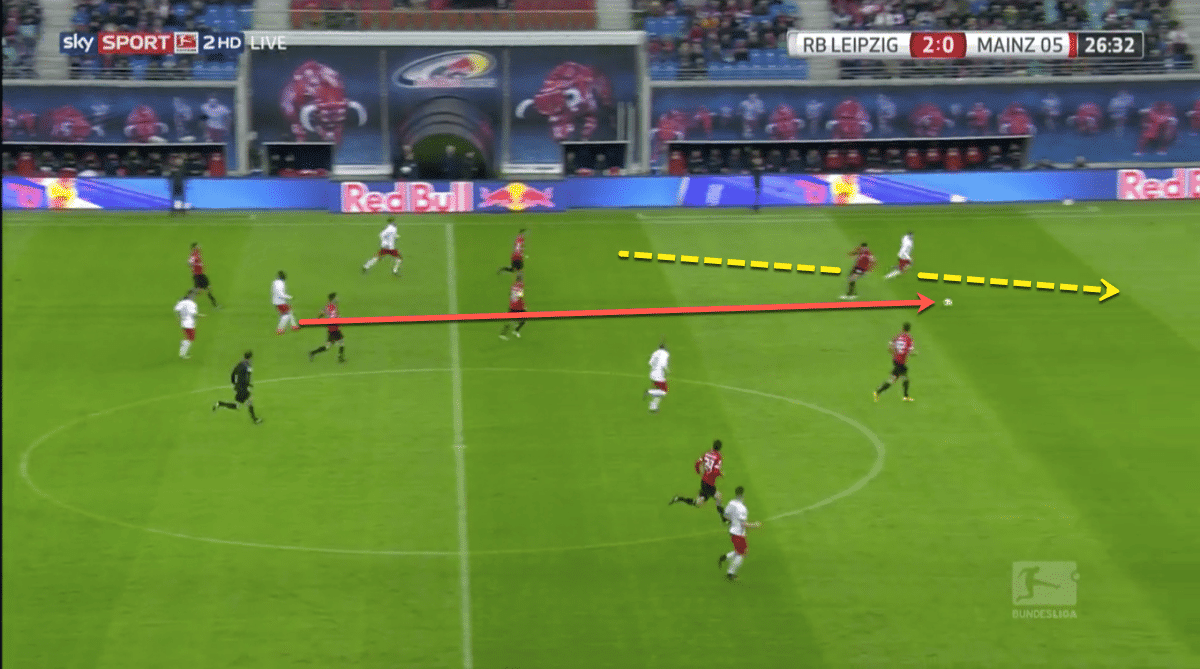 As he moves into midfield, he sees the run of Timo Werner and audaciously splits the Mainz defence by playing an outside-of-the-boot pass onto the exact blade of grass that gives his German team-mate the best chance of running through on goal unopposed – all without breaking stride.

This kind of adventurous and progressive approach means that Keïta's 81.4 per cent pass accuracy for last season was slightly lower than United's team average of 84.2 per cent. But his transitional ability makes him ideal if Mourinho wishes to counter-attack.

Keïta is also an incredible dribbler. His average of 3.1 completed take-ons per 90 minutes last term was the best of all Bundesliga central midfielders and far outstrips Pogba and Anthony Martial's team-leading average of 2.5 for United.

This ability to ghost past opponents is a powerful offensive tool, as evidenced by his Lionel Messi-esque wondergoal against Mainz in April, in which the Guinean burst from the halfway line past four defenders to score.

But Keïta's dribbling is most effective when it comes to press evasion. With pressing becoming such a key tenet of the modern game, the 22-year-old's ability to break away from opponents when closed down – similar to Mousa Dembélé for Tottenham – is invaluable to Leipzig, relieving pressure, maintaining possession and, again, turning defence into attack. 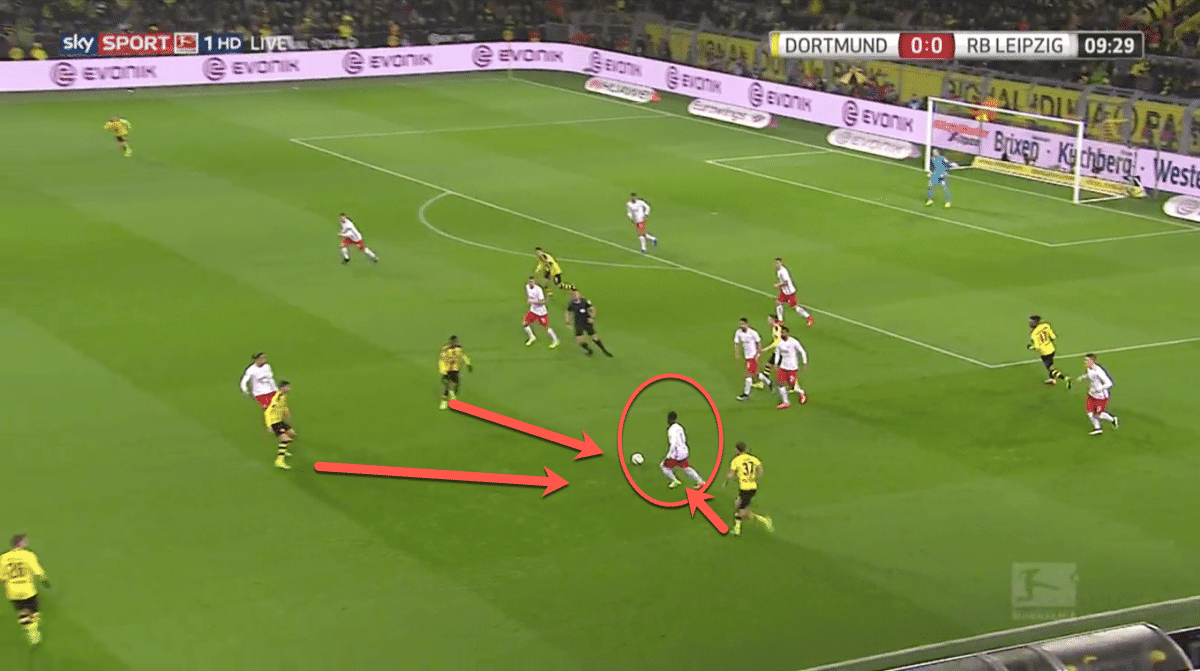 Here we see Keïta receive the ball deep in Leipzig territory against Borussia Dortmund. He is immediately put under pressure by three BVB players. 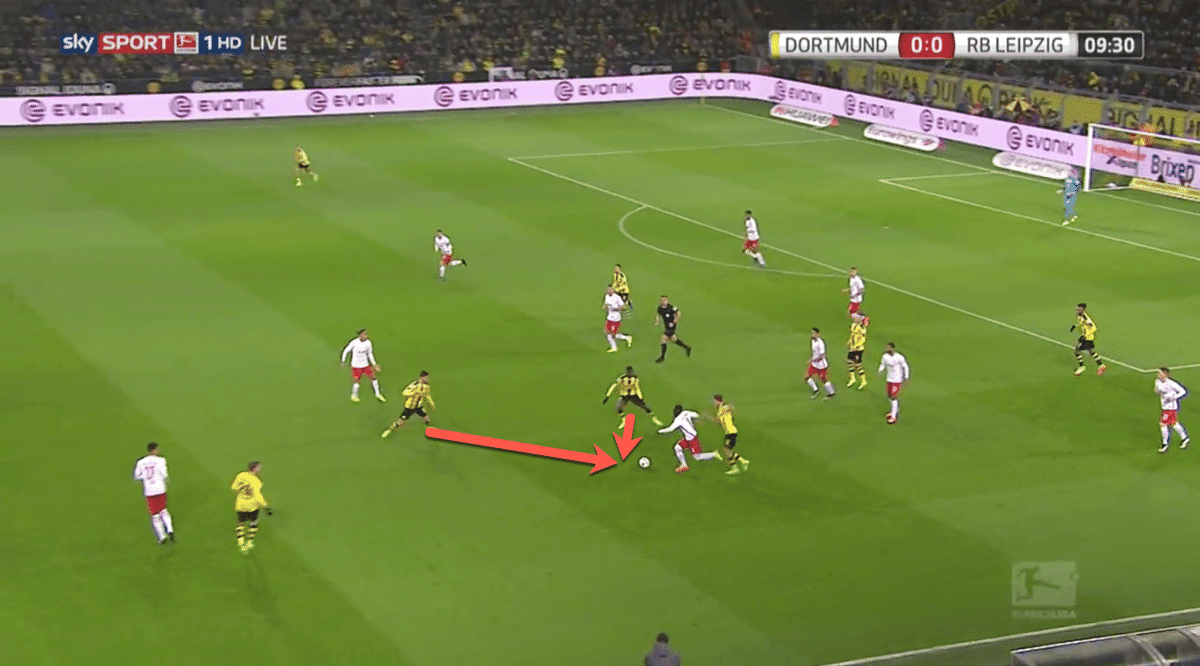 But he evades the first challenge and moves towards the open space to give himself the best possible chance of breaking beyond the two players still hot on his tail. 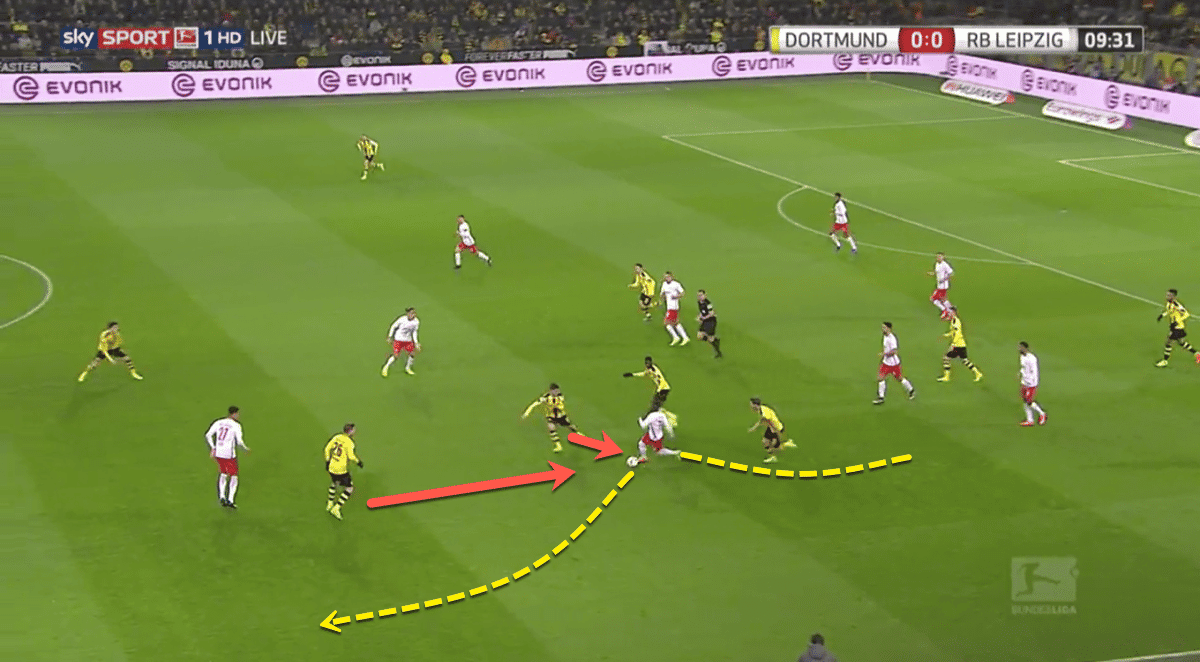 With a burst of speed and outstanding close control, Keïta swerves beyond the pressuring opponents and breaks across the halfway line, eventually winning a free-kick when fouled near the touchline in Dortmund's half.

Playing as part of the double pivot in Ralph Hasenhüttl's 4-2-2-2 system at the Red Bull Arena, Keïta has to be diligent in the defensive duties which form as much a part of his role as what he brings to the attack.

With remarkable awareness and the kind of engine which allows him to be constantly on the move, covering every blade of grass and putting out fires in front of the back four, Keïta is expert at nipping opposition attacks in the bud – the only real area of his game in which he resembles Kanté.

His 3.1 interceptions per 90 in the Bundesliga last term is evidence of his ability to anticipate and intervene, and even beats Herrera's Premier League-high average. 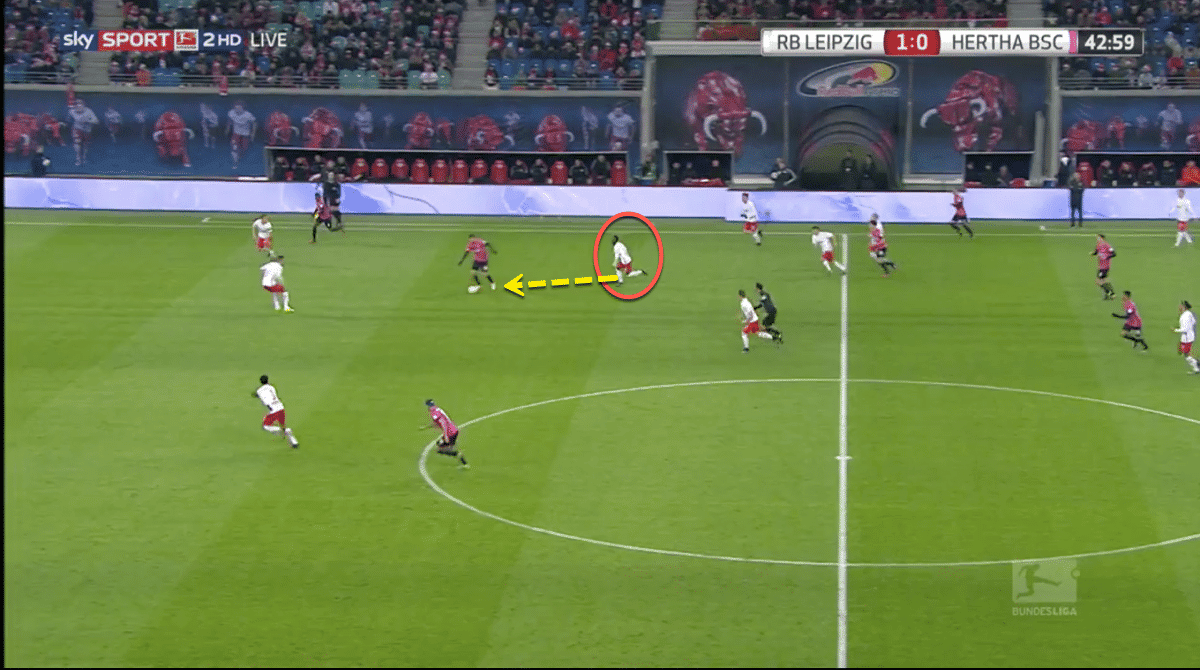 Here, in a game against Hertha Berlin last season, we see Keïta tracking back having recognised the away side's player in possession is breaking towards the out-of-shape Leipzig defence. 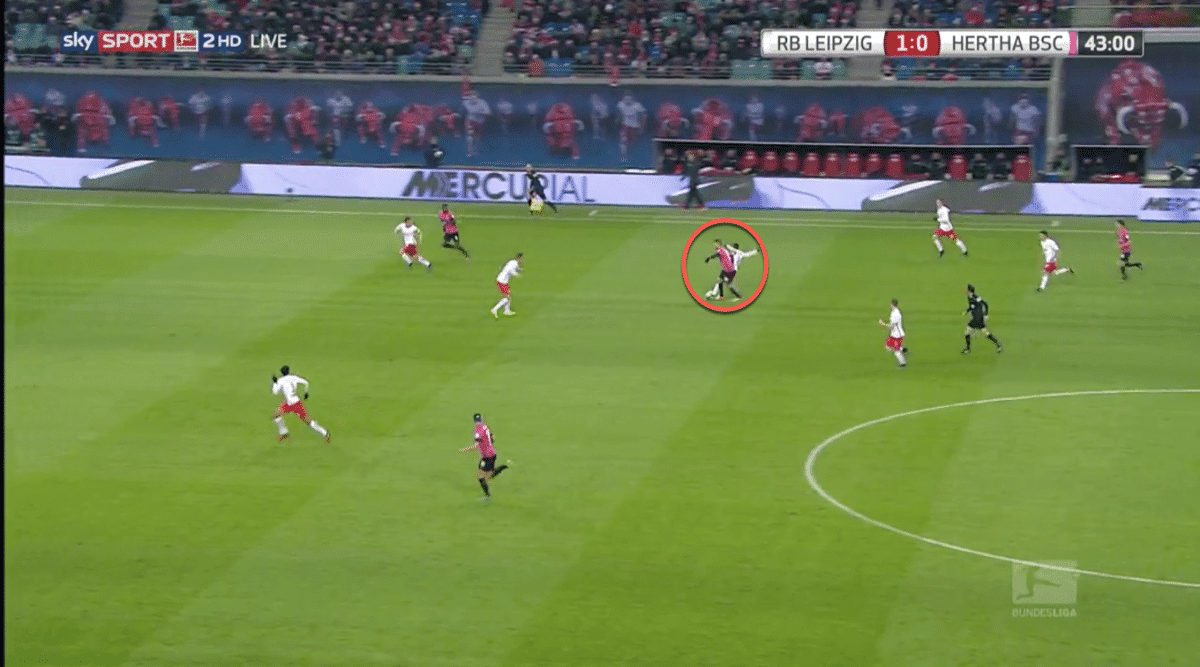 His speed allows him to catch up with the attacker, at which point he times and executes a clean tackle to strip possession. 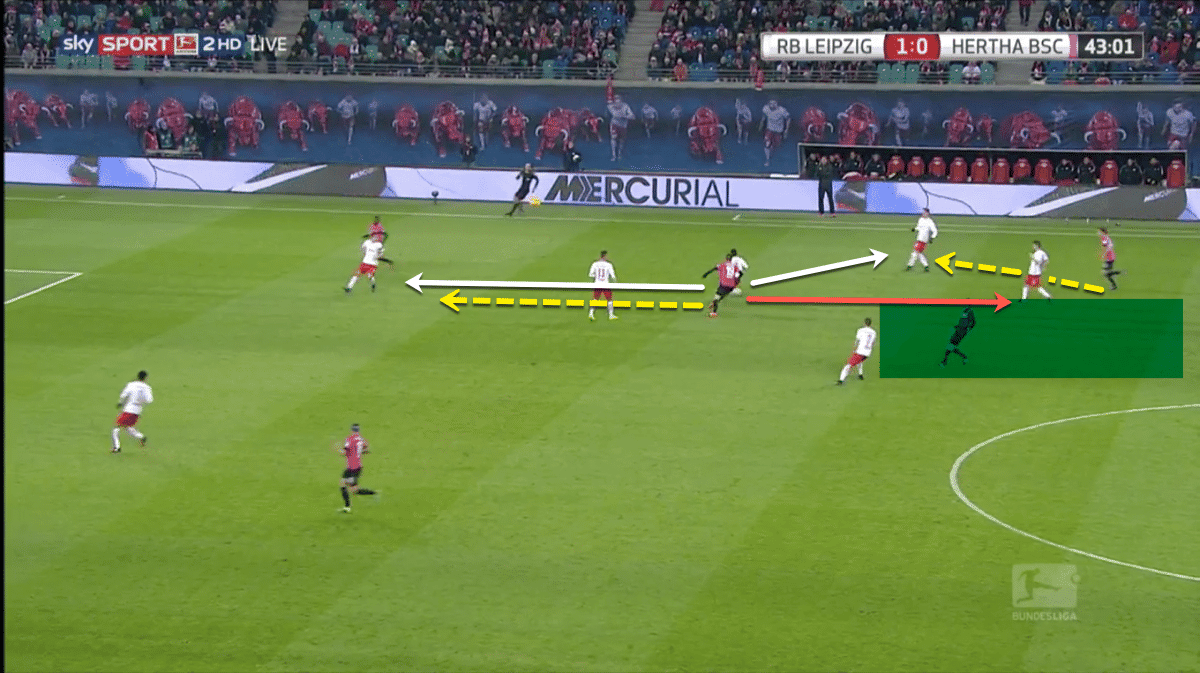 Keïta's work doesn't end there, though. Now with the ball at his feet, he has an opponent on his back and a decision to make about where to play he ball. The two passing options marked white would result in the receiving player being immediately under pressure.

Instead, always thinking progressively, Keïta takes the option marked out by the red arrow, releasing his team-mate into open space (highlighted green).

The truth is that Keïta is already an incredibly well-rounded midfield player with few glaring holes in his game. Despite his relative lack of experience, he has the quality and intelligence to improve most sides in Europe.

However, if there is one deficiency that still needs to be ironed out it is that he is too trusting of his team-mates. Keïta has such an immaculate first touch, such sharp awareness and such powerful upper-body strength that he is able to receive the ball under pressure anywhere on the pitch and invariably keep his side moving forward.

At times, he is guilty of expecting his less gifted colleagues to be able to do the same. 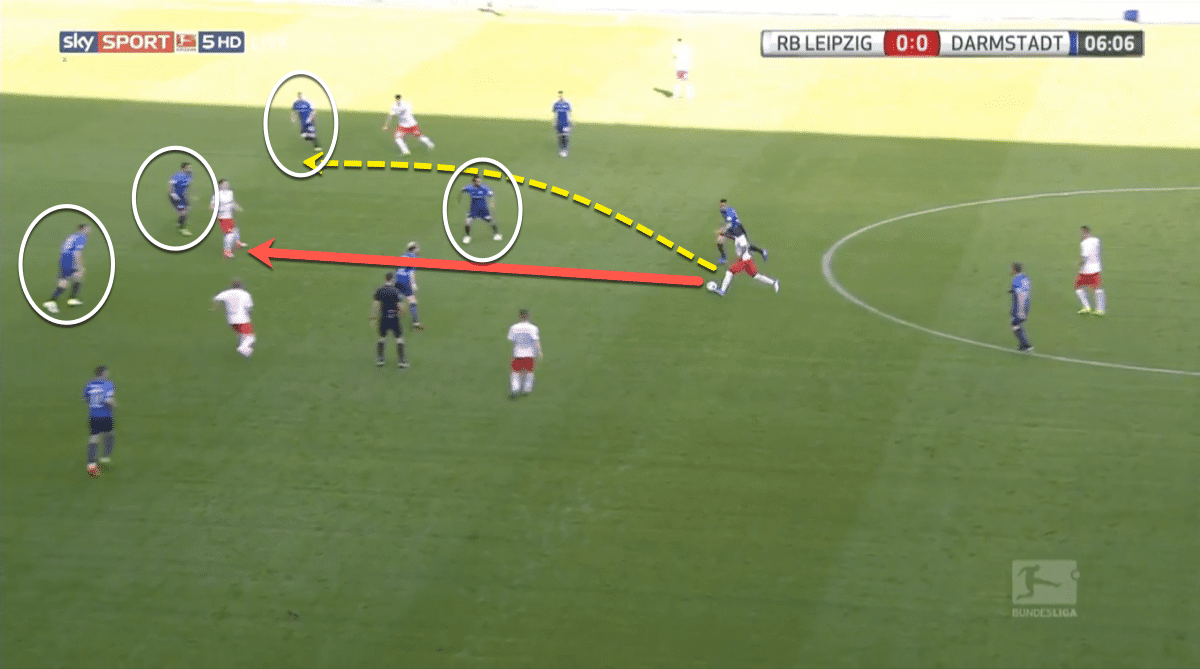 Here, Keïta plays the ball forward into the feet of his team-mate before then continuing his forward progress in anticipation of a return pass. But the Leipzig attacker receiving possession is surrounded by four Darmstadt players. 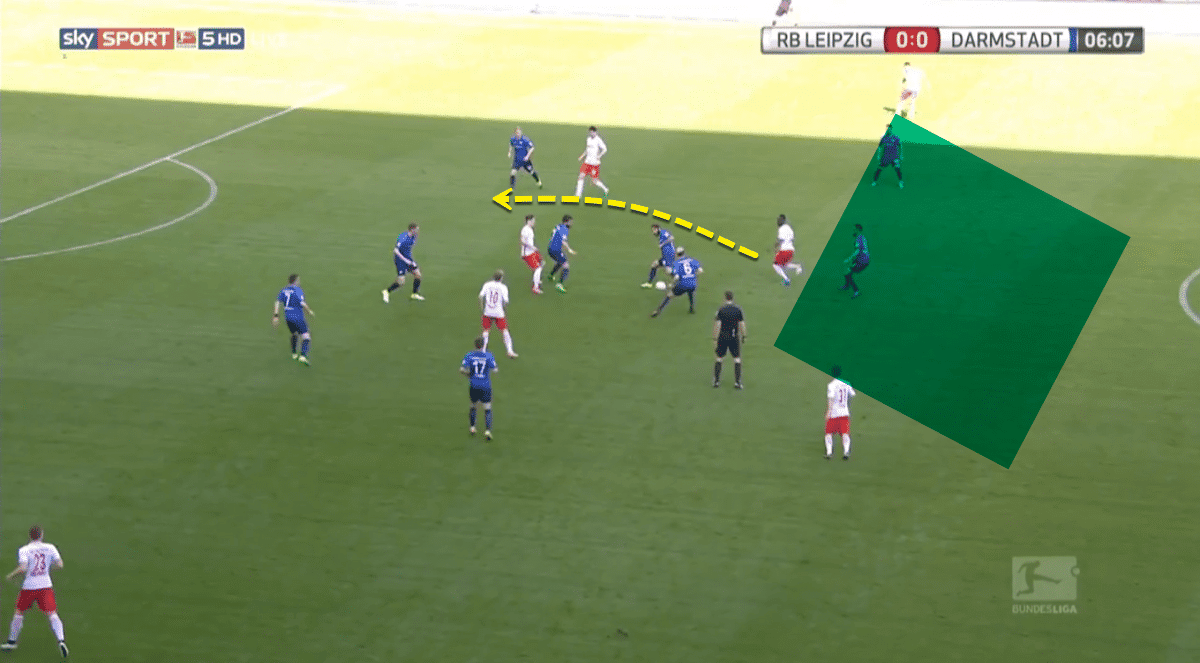 Inevitably, Leipzig cough up possession to the away side. Having broken ahead of the ball, Keïta has left a vacant space in midfield for Darmstadt to break into, leaving his side at risk of being exposed and outnumbered in a vital area of the pitch.

This, however, is something that can be fairly easily corrected through experience and sound defensive coaching, something that Mourinho has built a career in being able to offer.

Although they share many similar attributes, Keïta would by no means trample on Pogba's toes should he arrive at Old Trafford. Quite the contrary in fact: he would help the Frenchman shine.

It has been posited of late that United need a midfield destroyer in order to unleash Pogba's full potential, with a Dier or Matić-type able to do the defensive dirty work so that the former Juventus player doesn't have to.

But Pogba's best performances in Turin came without a destroyer behind him. Instead, he thrived when backed up by a deep-lying playmaker – or regista as they are known in Italy – in the form of Andrea Pirlo and latterly Claudio Marchisio, and with a box-to-box shuttler, Arturo Vidal, on the opposite side of a midfield three.

With Herrera in the Pirlo role and Keïta providing energy and verve on the right, Mourinho could replicate the balance of the Juve midfield in which Pogba blossomed in Serie A.

Getting the most out of the world's most expensive player is absolutely crucial to United's hopes of success at home and in Europe this coming season. And Keïta, in addition to adding plenty to the team in his own right, would help with that.

It is understood that, as Football Whispers have exclusively reported, Liverpool remain in the driving seat for Keïta should RB Leipzig be convinced to sell their star man this summer.

But United's spending power means that they cannot be completely discounted.

Keïta, standing just 5ft 8ins, may not be the typical Mourinho midfielder, but he has all the tools to transform the Red Devils into a real force.