Or, if there’s anybody from UEFA reading this, FC Salzburg.

Now plying his trade with RB Leipzig, he was one of the standout performers as the Bundesliga debutants took the league by storm to finish second. The links to a more traditional bigger club were inevitable. Spurs, Bayern Munich and Liverpool were all said to be keen on prying the 22-year-old away from Leipzig.

As Football Whispers exclusively revealed, however, it was the Reds who had made positive moves early on to jump to the front of the queue for the diminutive midfielder. The Spurs interest, in the media at least, was short lived and the Bavarian giants have just secured the signing of Lyon’s Corentin Tolisso.

Liverpool by no means have a clear run at the Guinean international, with his German club no needing to sell, but if reports are to be believed, the Merseyside club are going to do everything they can to land their top midfield transfer target.

James Pearce of the Liverpool Echo recently claimed the Reds were willing to pay as much as £50million for the midfielder who moved for a fifth of that just 12 months earlier. But it has since been reported that, having seen a bid of £66million rejected, Liverpool could return with an offer in excess of £70million.

reiterated this point during a Q & A on reddit, saying: “RB Leipzig will be difficult to negotiate with as they don't want to sell Keïta and want to build their team around him.

“It may take £50million plus to convince them otherwise, and even then, they could insist he's not leaving.”

There were question marks over whether RB Leipzig participation in the Champions League due to FC Salzburg being involved but UEFA cleared the two clubs. Afterwards Oliver Mintzlaff, the head of soccer operations for Red Bull, revealed the club wouldn’t be selling Keïta, or any of their other key players.

“It would be negligent to sell one of our key players now,” he told BILD.

“Emil (Forsberg) and Naby are extremely talented and developable players, we are glad that we are able to keep up with their development as a club.

“And now we can prove ourselves in the Champions League in the coming season.”

Should what Mintzlaff said be taken seriously, though? A club official isn’t going to inform the press that they’d be willing to entertain offers for their star players. It puts them at a disadvantage because buying clubs know that they’re prepared to sell. 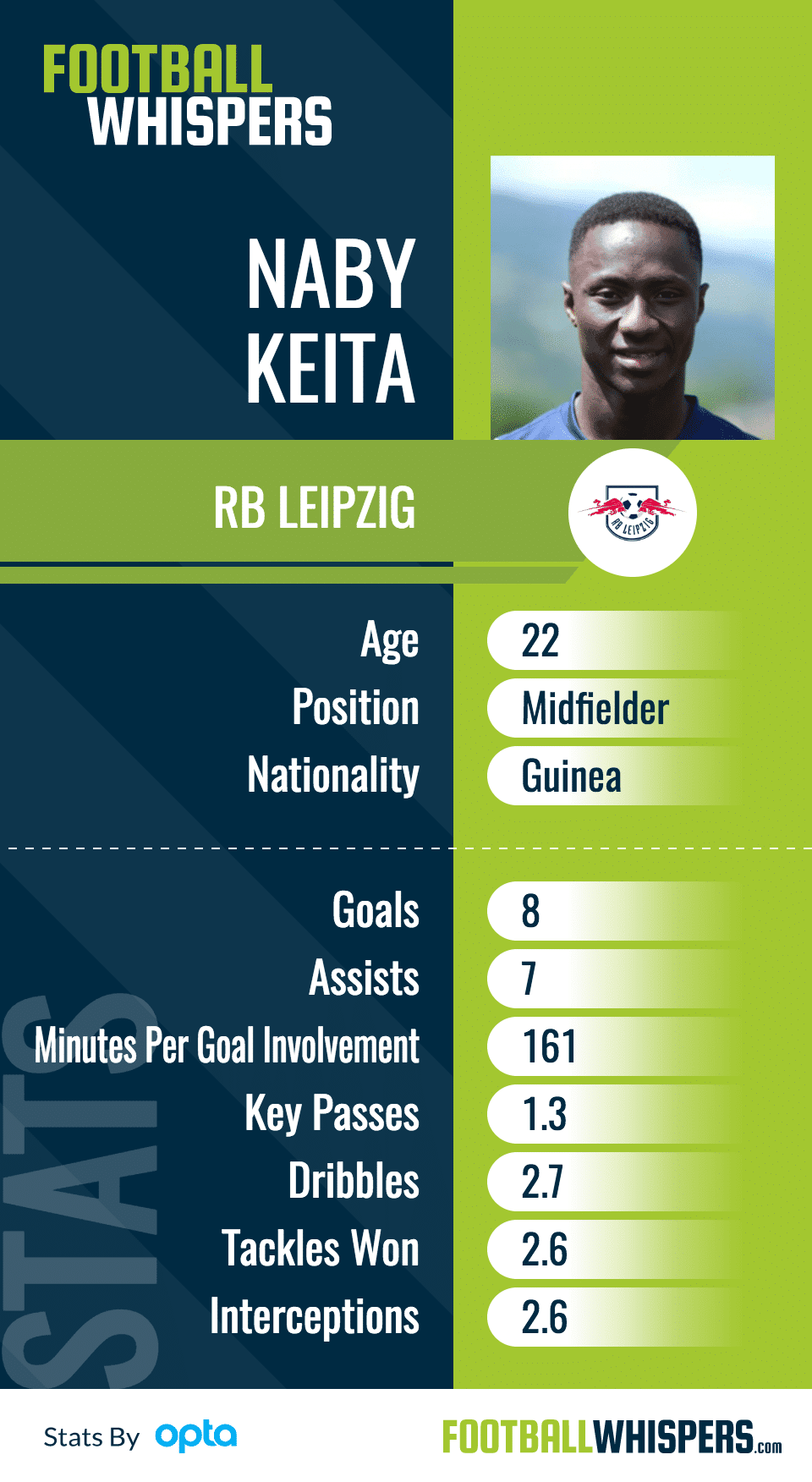 Liverpool fans should know all about that having seen Fenway Sports Group hold firm over Luis Suarez, Raheem Sterling and Fernando Torres. The trio left but it was after the owners put their poker faces to good use.

Furthermore, RB Leipzig may not have any intentions to sell but in football every player has a price. The way Liverpool went after Southampton’s Virgil van Dijk shows they’re prepared to be ruthless in this window to back Jurgen Klopp. What’s stopping them from doing the same with Keïta?

The fact the box-to-box midfielder shares an agent with Sadio Mané – the pair were pictured together recently – surely works in Liverpool’s favour too?

With that in mind, we've decided to take a look at how Liverpool could line up if they managed to sign Keïta.

Where would Keïta fit in at Liverpool? 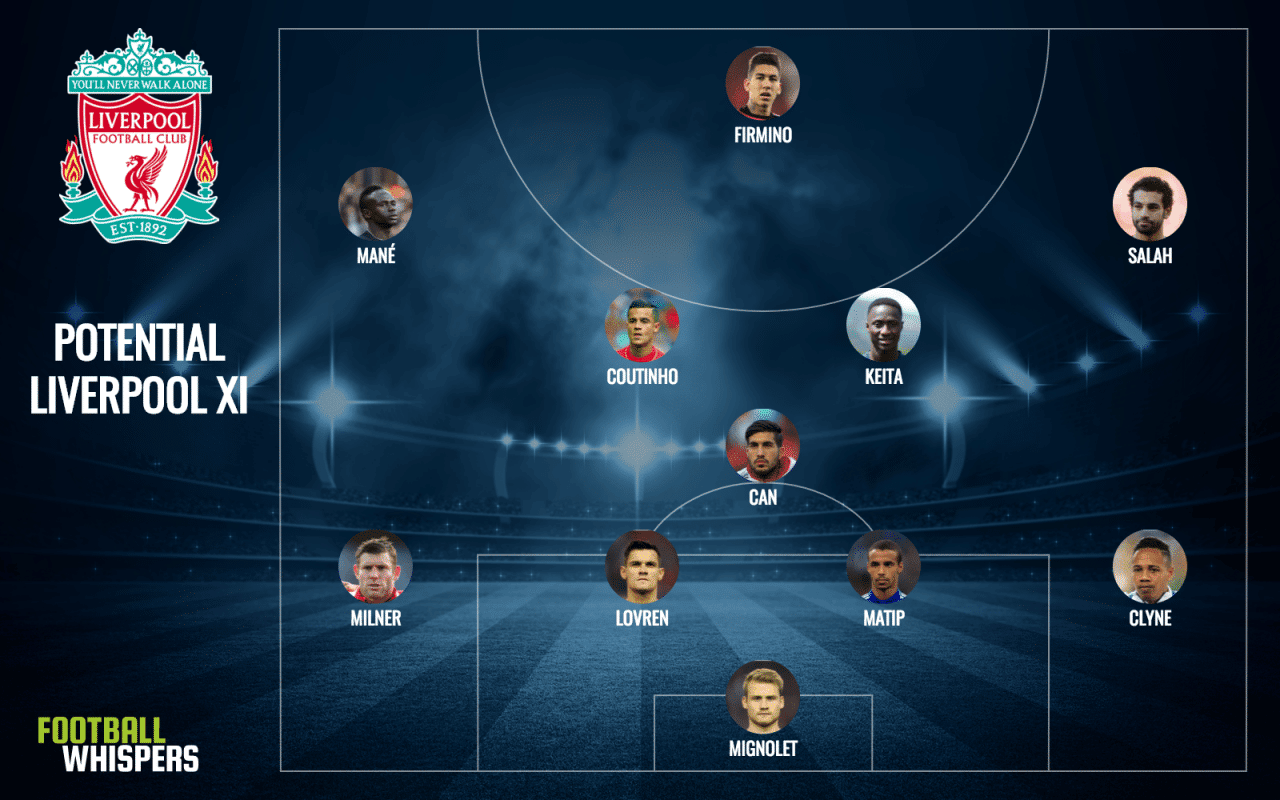 Liverpool, of course, will hope to further strengthen as the window progresses. Despite the club publicly announcing that they'd no longer be pursuing van Dijk recent reports have suggest should he push for a move the Reds would be more than willing to accept him at Anfield.

The club have been in the market for a left-back for quite some time. A host of names have been linked with a move to provide competition for makeshift full-back James Milner with Alberto Moreno set to leave this summer.

If the club bring in a left-back as expected and van Dijk that's a new left side of the defence sorted and the Reds look considerably stronger.

Now, on to Keïta.

If the Reds stick with the 4-3-3 system Klopp used last season then he's likely going to rival Georginio Wijnaldum and Adam Lallana for their places in the team. Granted, both played different roles with the former acting as a link man at times and the latter being a more attack-minded box-to-box midfielder.

It just goes to show how much of an all-rounder the RB Leipzig man is. He can comfortably play as a defensive midfielder, an attacking midfielder and as a box-to-box powerhouse. His stats show there's not really a weakness to his game, hence why he could play Wijnaldum's position as well as Lallana's.

The arrival of Mohamed Salah has an impact on the team too. He's more than likely going to occupy one of the flanks meaning Philippe Coutinho, the left-winger last season, could find himself in a centre-midfield role. The Brazilian excelled there in the final two games of the 2016/17 season but until then Klopp seemed to be reluctant to use him there.

If the German coach now intends to let Coutinho pull the strings at the heart of the team then it leaves Wijnaldum, Lallana, Keïta, Jordan Henderson and Emre Can fighting it out for two positions.

It's unlikely that Keïta wouldn't be a starter and with Jordan Henderson's injury issues the former Klopp may opt to start Can in the deeper role.

Squad depth is a nice thing to have. With the Reds, hopefully, having Champions League football it's safe to assume Klopp will rotate the midfield and with the options available he could easily field two strong midfield trios.

Who would start in your midfield?