Jürgen Klopp and the recruitment team at Liverpool decided not to replace Philippe Coutinho in January. The Brazilian maestro moved to Barcelona in a deal which saw him become the second-most expensive player in the world.

While the Reds have managed without him, blazing their way to the Champions League final, it was a risky move to sell their No.10 when the players on their wish list to replace him weren't available during the winter window.

However, if reports are to believed, their patience has paid off.

Canal + claim Liverpool are “99 per cent” certain to sign Lyon star Nabil Fekir. The reported £60million fee would make him the club's second-most expensive arrival, behind only Virgil van Dijk, as well as being the French side's biggest ever sale – surpassing the £54million they received for Alexandre Lacazette last summer.

Both sides may have looked to pour cold water on the links in recent weeks but there's too much smoke for there not to be a fire.

With this in mind, we've decided to take a look at what the Lyon playmaker, who is enjoying the most productive season of his career, would bring to the Liverpool side. Is Fekir, with just two years remaining on his deal, really worth close to £70million in the current market?

What Fekir would offer the Liverpool team?

Like his compatriot and long-term Liverpool transfer target Thomas Lemar, Fekir can play a number of positions, though he’s excelled as a No.10 this season. The roaming midfielder role played by Adam Lallana during 2016/17 and Coutinho at various times isn’t too dissimilar to that.

With the Reds dominating the ball, they’d often push the third midfielder, usually the more attack-minded, box-to-box man, into the final third to make an attacking quartet, with the player joining the attack being the man to pull the strings in the No.10 area.

He might be able to replace Coutinho as the fourth musketeer, but can he replace the former Inter Milan youngster's creativity?

Despite being the second-highest scorers in the Premier League this season with 80, the Reds have struggled to break defensive teams down from time to time and it's why they've drawn a third of their matches.

Granted, creativity against those sorts of teams was an issue when Coutinho was at the club, but the lack of attacking depth has been apparent over recent weeks with Klopp forced to rotate. 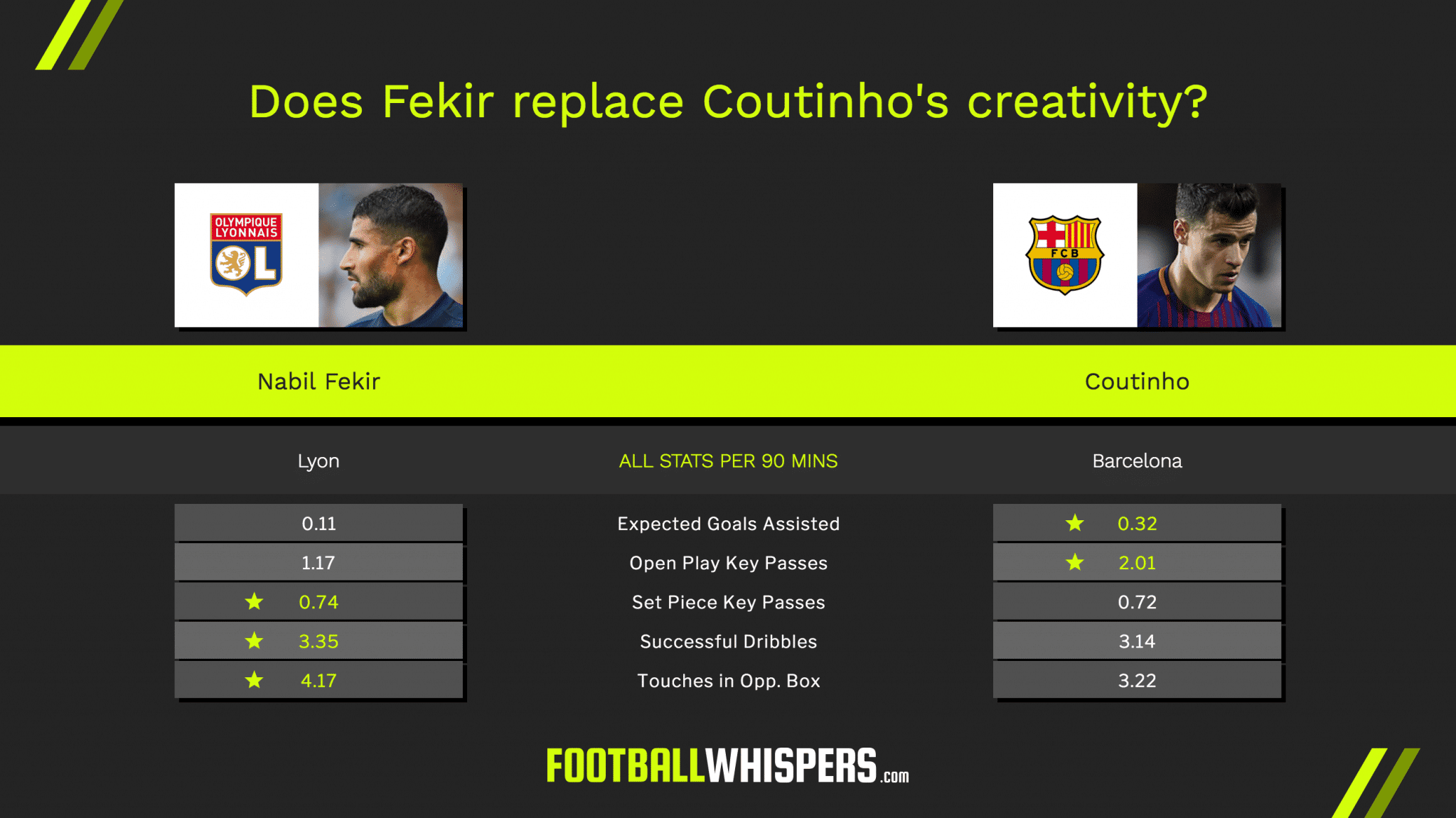 Fekir doesn't have to replace Coutinho's creativity by himself, he just has to be part of a dangerous attacking unit. The truth is Sadio Mané's tweaked his game since the winter window and has turned into more of a creator. It buys into the theory that Klopp never wants to be too reliant on one player; the more creators, goal threats and match winners, the better.

So, while the former Liverpool No.10 has a significantly better xA90 (expected goals assisted per 90 minutes) tally, as well as playing 0.84 more key passes per 90, Fekir gains ground in the set-piece key passes, successful dribbles and touches in opposition's box categories, all of which are ways to judge the creativity of a player.

The Lyon-born attacker is a genuine goal threat. He's been involved in a goal every 125 minutes in Ligue 1 and Europe since the start of the 2013/14 season, scoring 51 goals and assisting a further 27.

While his xG (expected goals scored) numbers might not be the greatest, he's a player who adds quality to his shots and regularly out-performs the metric. This season he's netted 17 times in Ligue 1 despite having an xG score of just 7.83, according to the Football Whispers Lab.

The post-shot xG stat, which looks at where shots land on target, has Fekir at 11.33 for the 2017/18 season, showing that he adds value to his shots with his placement. 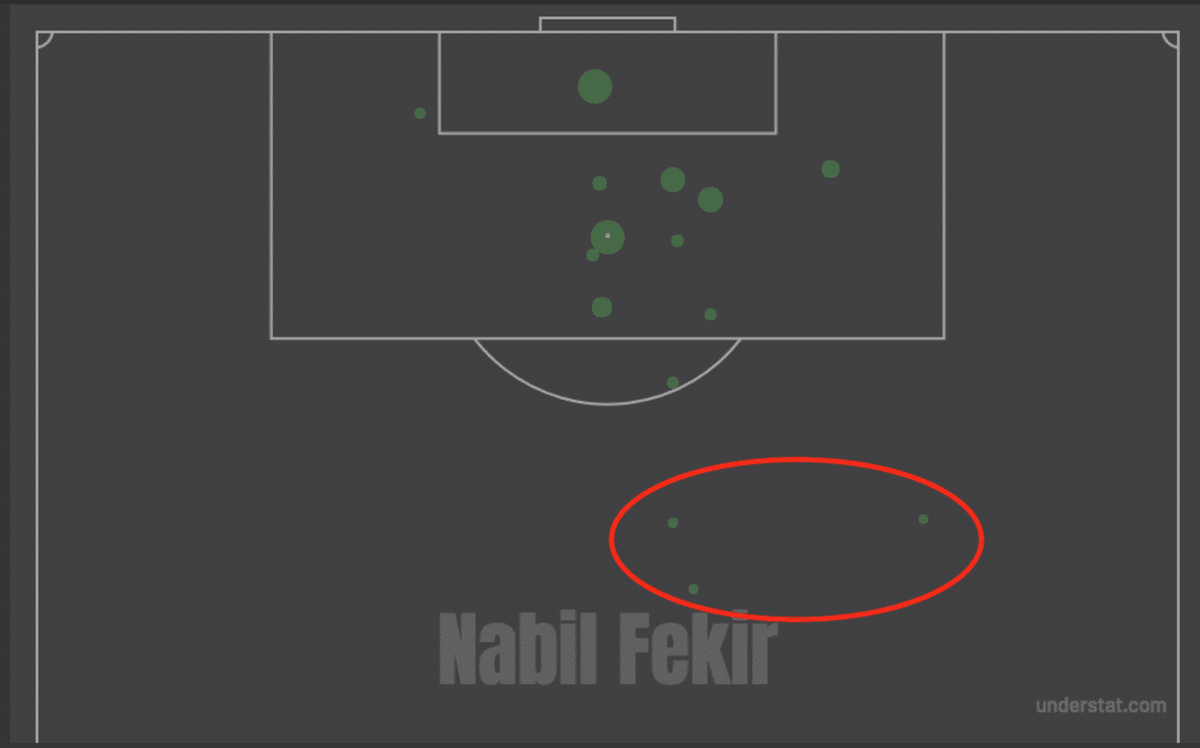 What is clear is that Fekir's goals are, for the most part, transferable. The graphic above, courtesy of understat.com, is his goal map for the season. It shows that 13 of his goals have come from inside the penalty area, meaning this sort of goalscoring form is definitely sustainable as long as he keeps getting into the box.

The three green dots circled in red are free-kicks that he's managed to score. The Reds have lacked a set-piece threat since Coutinho swapped Merseyside for Barcelona. A reliable goal threat from free-kicks gives a team something of a wildcard.

He's not just a goal threat during open play. The unpredictability of these players just adds another dimension to their attack. The video above is a prime example of Fekir's outside-of-the-box-thinking. He nets a stunning goal and grabs an assist against Paris Saint-Germain in a 2-1 win for Lyon.

And it wasn't the first time Fekir was a game-changer in a high-profile match for Bruno Génésio's men: he was involved in all three goals against Monaco in the 3-2 win, and scored against Marseille when OL picked up a vital three points at the Groupama Stadium. This shows that the Lyon captain has a winning personality and he doesn't go into hiding when it matters most.

He's maturing as a player, too, and this is usually when Liverpool make their move. 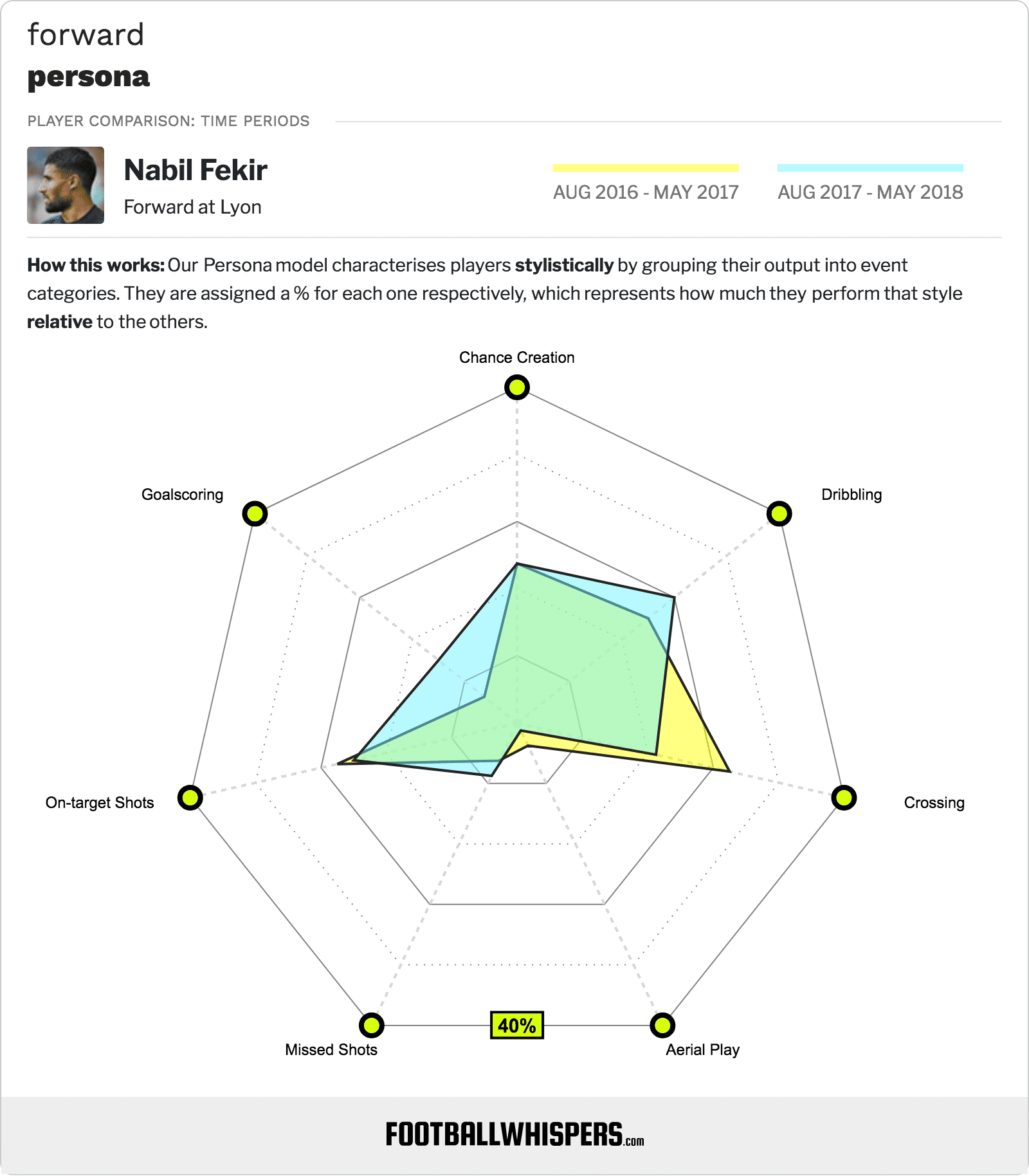 Using the Football Whispers persona model, which looks at the style of a player, we can see that Fekir's been fairly consistent for the past two seasons despite the fact the Ligue 1 side have been in transition. They have lost Lacazette, Samuel Umtiti and Maxime Gonalons over recent seasons, three key players, yet the Lyon No.18's style has remained the same

The only difference this season is that he's stopped putting in as many crosses and has instead increased the amount of dribbles he attempts, which the stats back up (3.35 take-ons per 90 this term, up from 2.23). He's still attempting the same amount of shots per 90 – around 3.1 mark – but his finishing has improved, proven by the post-shot xG stat, and that's why he's scoring more.

It's around this time of a player's career that the Reds look to recruit – when potential is becoming genuine ability. The club then rely on Klopp to harness it and the players to improve – see Mohamed Salah, Roberto Firmino and Mané for details.

At £62million, the price for Fekir may seem steep and there may be better value for money targets across Europe, but the club would still only be spending half of the Coutinho money to bring in someone who is just as much of a goal threat as the Samba star while being 13 months his junior.