It's been a strange 12 months for Nabil Fekir.

Heading into the final stages of the 2017/18 campaign, he was one of the most in-form attackers in world football. Liverpool’s interest leaked in May and he was almost a Red before he jetted off to the World Cup.

On paper he was perfect for Jürgen Klopp’s side. He was also perfect for a number of Europe’s elite.

The Premier League leaders agreed on a deal to sign the versatile forward, with a bid in the region of £50million convincing Jean-Michel Aulas to part with his prized asset. A move to Anfield fell at the final hurdle, but that didn’t stop him being linked with both Chelsea and Barcelona heading into the final few days of the summer transfer window.

With Les Blues, he played a part in helping them lift the trophy 20 years after Zinedine Zidane and friends managed that very same feat. He wasn’t given a starring role but he that doesn’t detract from the face he is a World Cup winner.

However, the Frenchman has gone from being one of the most sought after forwards in Europe to being something of an afterthought in the space of 12 months as clubs plan their 2019 summer recruitment drive.

With just one year left on his deal, Fekir is the sort of player clubs should be swarming over. But with questions marks hanging over his knee – the rumoured reason his move to Liverpool collapsed – there appears to be very little interest in Fekir even though reports in France claim Aulas is prepared to cash in his captain so he doesn’t lose him for free next year.

A game-changer, a difference-maker and a regular match-winner for Lyon, should one of Europe’s best take a risk and sign him this summer?

The 2017/18 campaign was Fekir's coming-of-age season; the 25-year-old hit 18 Ligue 1 goals in just 29 appearances. It wasn't the first time he'd hit double figures in a single campaign but this one was special as it showed he better than ever after missing the best part of the entire 2015/16 season with torn knee ligaments.

For the first time, Fekir had scored 20 plus goals in all competitions. There was a ruthless streak to his game and he was thriving as the main man for Lyon. 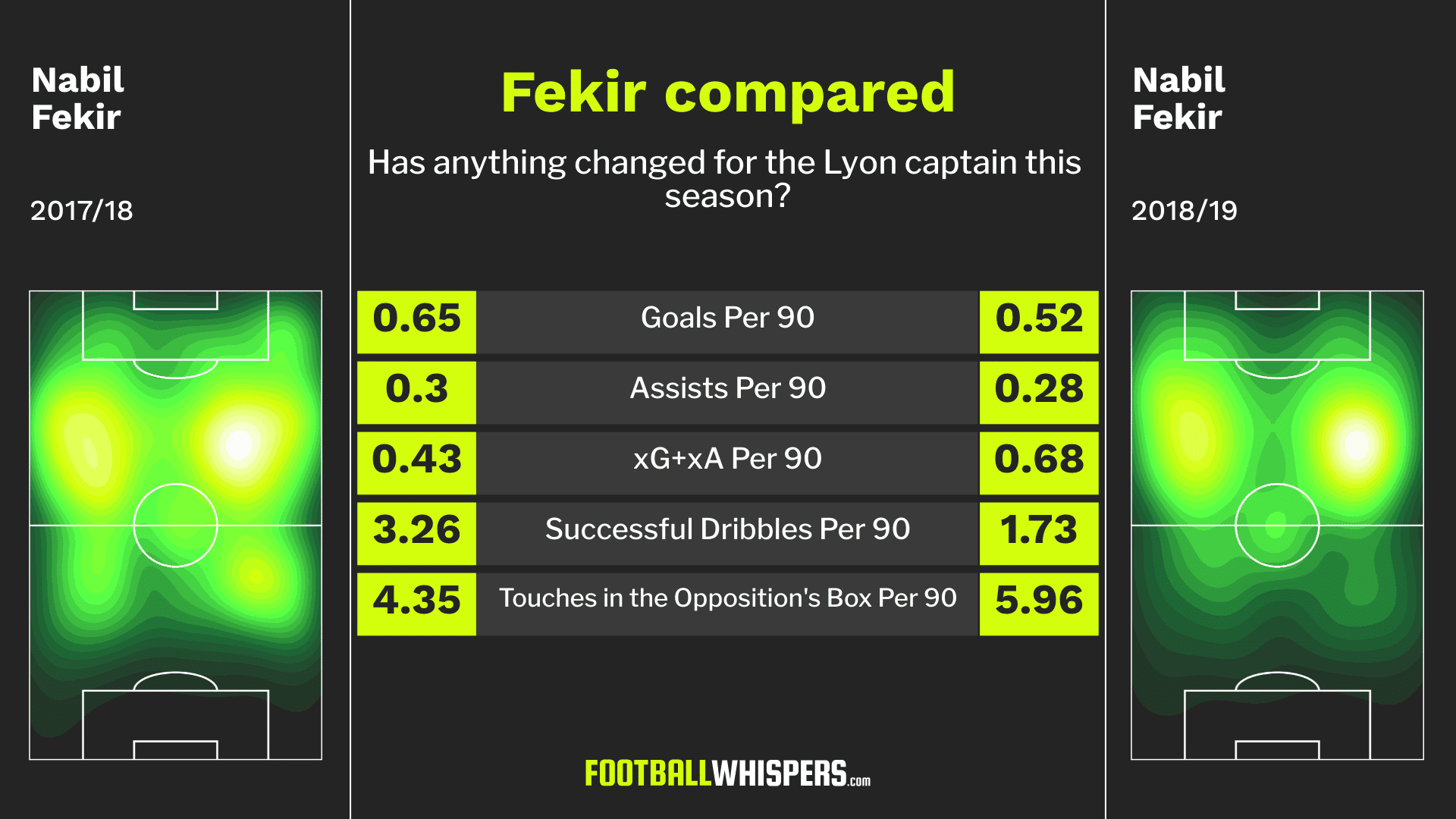 His return of 0.65 goals per 90 minutes in Ligue 1 was the eighth best average in the French top flight last season. A remarkable feat for a player who primarily spent his time on the pitch as an attacking midfielder.

His average of 0.3 assists per 90 meant he was involved in 0.95 goals per game. Essentially involving himself in a goal whenever he was the pitch.

He was considerably outperforming his expected numbers but the elite tend to do that.

He's not been as productive this term but Lyon, in general, have failed to reach the heights of last year. Despite a drop off in goals, he is still averaging 0.52 per 90 this term, again ensuring he makes the top ten, and his assist average has remained at a similar level.

However, what is interesting is the fact his underlying numbers have improved by 0.25. His xG90 (expected goals per 90) has risen from 0.29 to 0.52, showing Fekir is getting into dangerous areas on a more regular basis.

He's attempting fewer dribbles but this might be because he's involving himself more in the penalty area, so there are fewer opportunities to beat a man. It's a subtle tweak to his game but it's resulted in him increasing his xG. 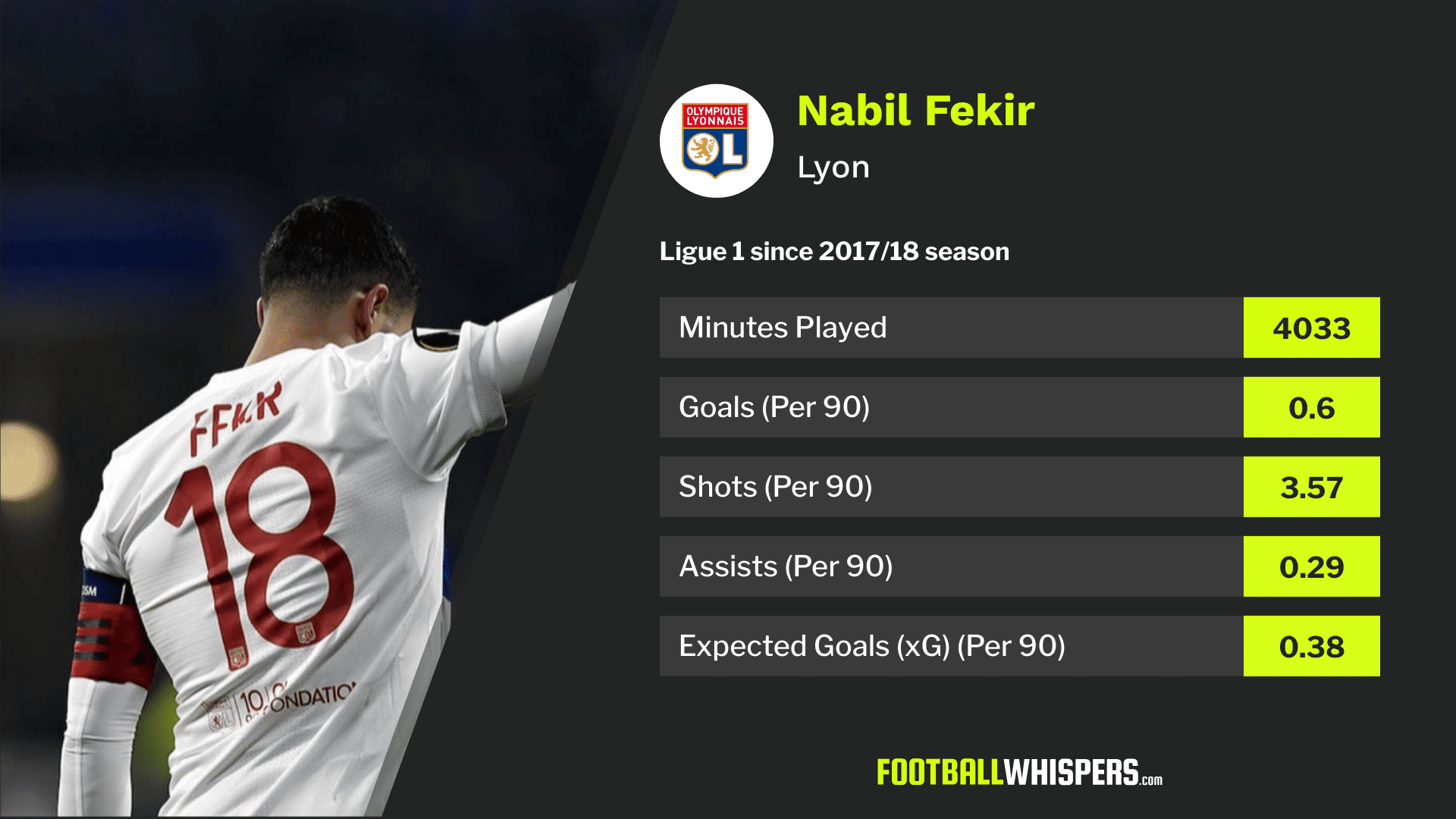 In terms of consistency, Fekir's appeared in over 4,000 Ligue 1 minutes since the start of 2017/18. That is the equivalent of 44 full 90-minute matches and there are still eight games left to play in the French league this season. Furthermore, that total doesn't include the cup games he's appeared in.

The sheer volume of minutes should ease any concerns teams may have about his knee.

He's averaged 0.6 goals per 90 minutes over this period as well as 0.29 assists. These numbers show last season wasn't just a flash in the pan and that his output, and his form, us sustainable.

Granted, there may be a drop off if he moves to another club but that happens with most players while they adapt to a new league, a new playing system and new teammates.

Due to Fekir's contract situation, there's very little risk in signing him now. He'd no longer command a £50million fee. Most clubs would put him on a performance-based deal meaning they aren't at much of a loss if he does pick up an injury. He'd arrive as a squad option which lends itself to managing his minutes properly.

Fekir isn’t tainted goods. He could well be the bargain of the summer. A World Cup winner, a reliable goalscorer and a versatile forward. All for under £30million if reports are to believed. Clubs should be forming an orderly queue.