It’s no secret Arsenal are looking to reinforce their backline this month. It was at the top of the club’s to-do list prior to David Luiz and Shkodran Mustafi’s disaster class against Chelsea but that mishap may just expedite the process.

The Gunners have been strongly linked with

Rumoured to also be a Manchester City transfer target, the 23-year-old has caught the eye for the Ukranian champions this season, starring under new coach Luis Castro’s side in the Champions League. The left-sided centre-back appeared in all six games for Shakhtar as they finished a point behind Atalanta and dropped into the Europa League.

Matviyenko seems open to a move, too. The player’s agent, Yuriy Danchenko, ‘hopes’ Arsenal reach an agreement with Shakhtar after opening talks for the Ukrainian centre-back.

“Recently, my colleagues and I have been constantly in contact with representatives of the Arsenal, and have had meetings,” Danchenko told Ukrainian media.

“The Gunners’ hierarchy have already contacted [Shakhtar], and we hope that these negotiations will succeed.”

A fee hasn’t been mooted yet but it is expected that he’d be significantly cheaper than Upamecano. The Frenchman was initially rumoured to be Arsenal’s top target. There are reservations about signing players from Ukraine, especially with it taking Fred so long to adapt to life in Manchester.

However, there have been success stories. Willian arrived at Chelsea via Anzhi Makhachkala but he made his name with Shakhtar. He’s been a key part of their team now for seven seasons.

There’s no reason Matviyenko couldn’t be another Willian, rather than another Fred. The quality in the league may differ but when analysing the centre-back, the important thing is to assess his playing profile. If his traits are transferable, there’s very little risk involved. 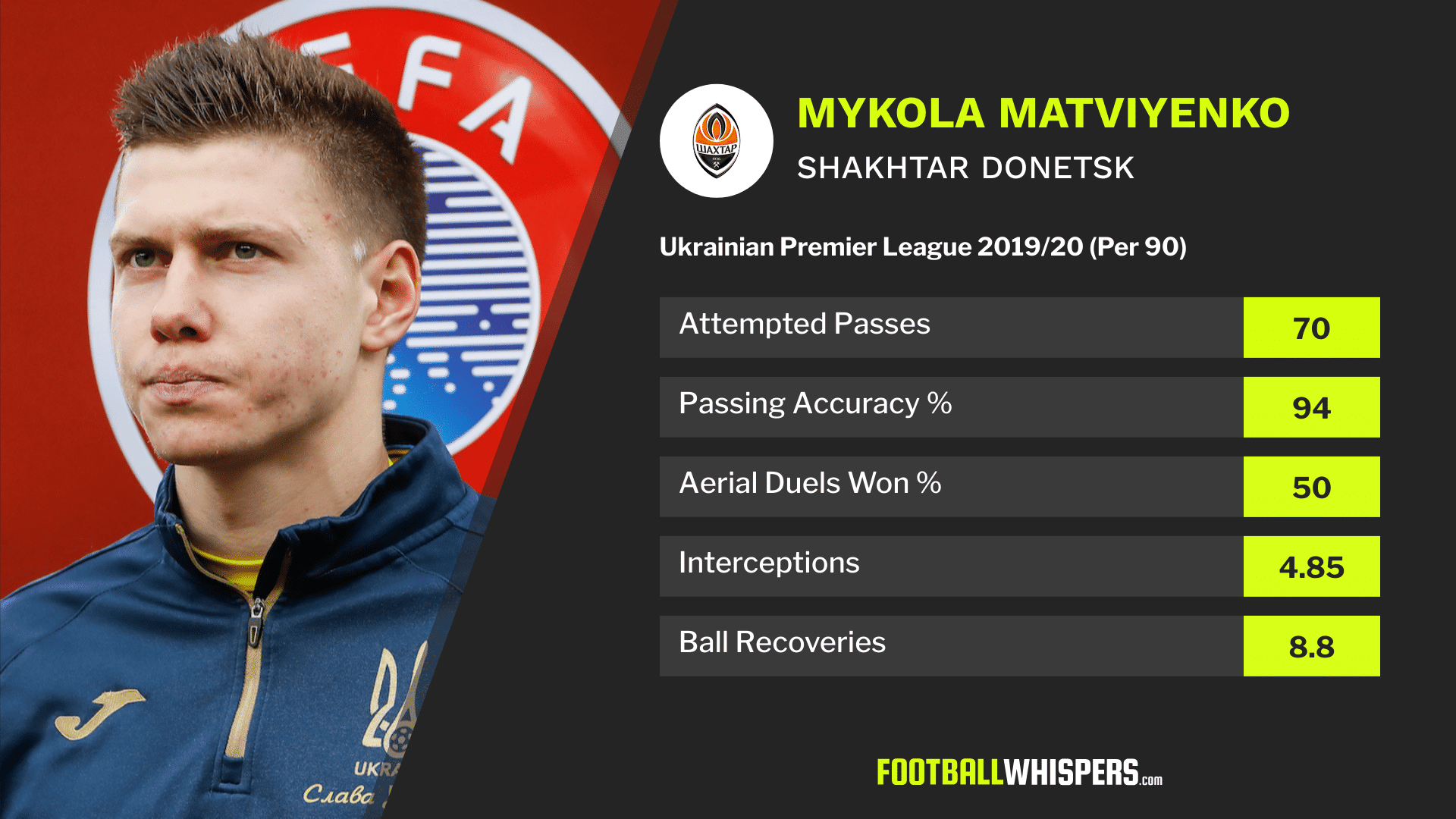 Statistically, the 23-year-old shows up well. So far this term, Matviyenko is attempting, on average, 70 passes per 90 in the league. Of those, 94 per cent find a team-mate. He's frugal in possession and that is perfect for Mikel Arteta's approach to games.

He's decent in the air, too, winning 50 per cent of his aerial battles. This wouldn't put him in the top ten in the Premier League, with juggernauts like Virgil van Dijk and Harry Maguire winning north of 65 per cent. But it is a good base to build on, and it shows he has a presence about him despite being under 6ft.

Matviyenko is very proactive and his defensive style can be described as aggressive. He's winning close to five interceptions per 90 and racks up 8.8 ball recoveries.

His aggressive approach can be seen in the image below. 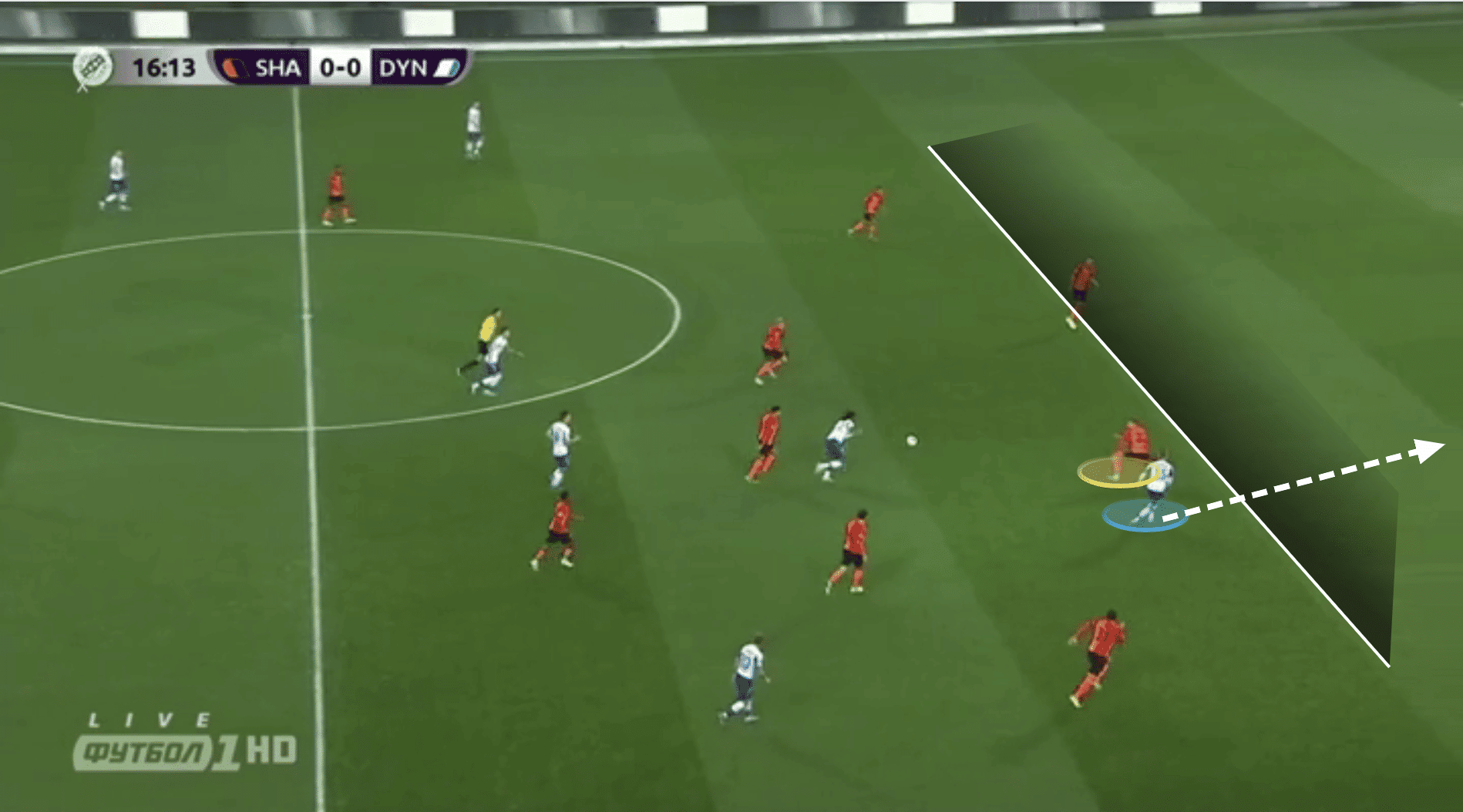 What Matviyenko does here can be described as risky. But the reward for doing so is stopping the opposition having a clear run on goal. Highlighted in yellow, the centre-back springs forward to latch onto a loose touch and this quells a potential counter-attack instantly.

Others in this situation would hold, track the runner and hope to intercept a pass. But that leaves much more to chance than what Matviyenko does.

The defensive line is all over the show and Matviyenko's partner is playing the man closest to the Arsenal target onside. He's assessed his options and realised the only way he's able to potentially stop this attack is to be aggressive, and that is what he does.

This isn't foolproof. Sometimes he'll be too late and it'll look like he's just vacated his position but his proactive approach will help more than it hinders. 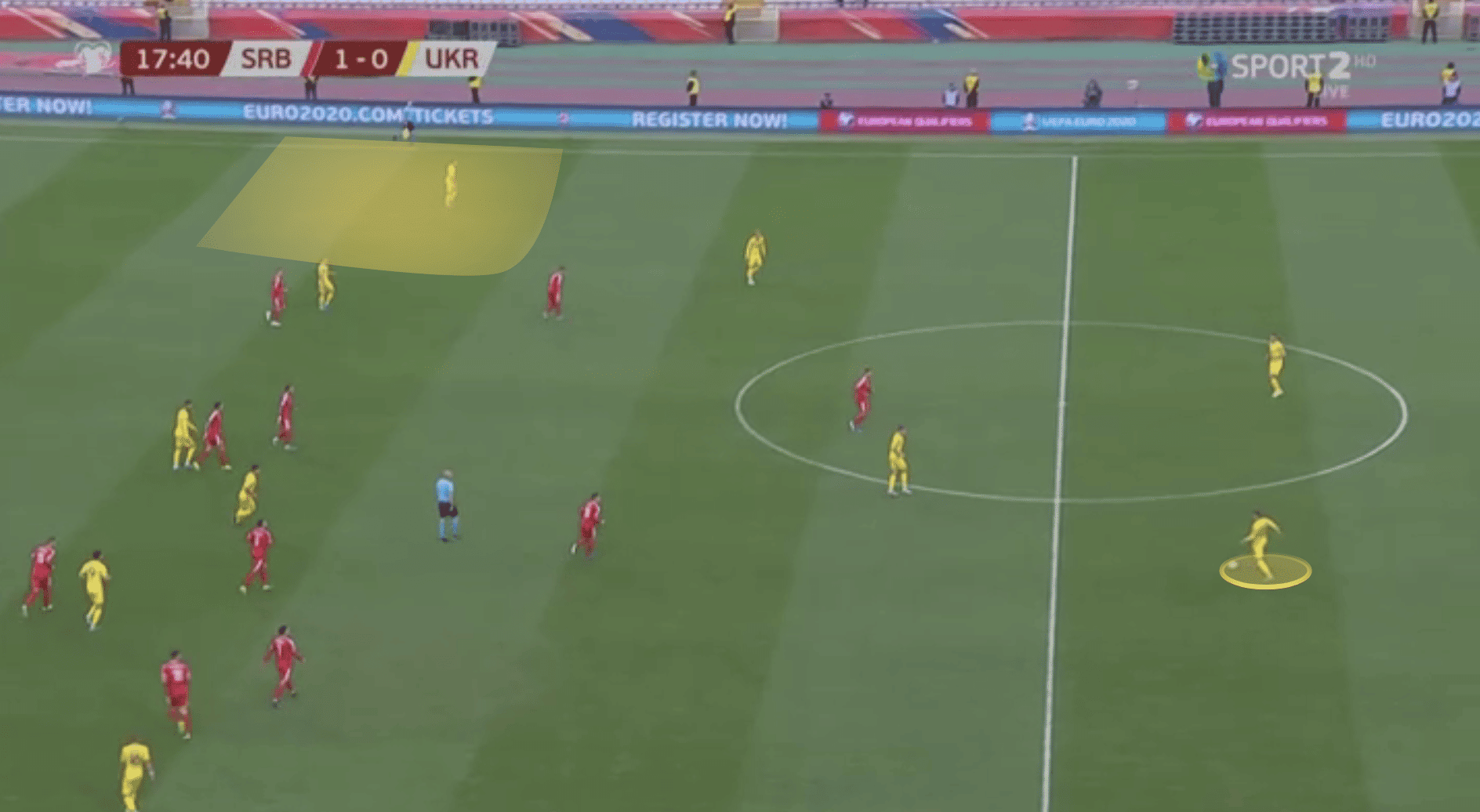 In the picture above, the centre-back is circled. In this scenario, others might look to retain possession by picking out a nearby team-mate. He has two options nearby and passing on responsibility would be the easiest thing to do. But with the middle of the pitch clogged up, Matviyenko takes it upon himself to stretch the play.

He spots the space on the right side of the pitch and floats a ball into that area. Immediately, the Serbian player on the left has to rush out, others have to cover and there is space for the Ukraine players to position themselves in.

With one pass, the team go from having very few options to being in the final third with passes on and team-mates in good positions to receive them. This diagonal pass is one top centre-backs have in their locker and top teams look to utilise on occasions.

Matviyenko won't excite fans as much as an Upamecano or a Konaté, but he could be just as influential for the Gunners. He could be what is needed to give Arteta that base needed in the defensive third to build the attacking side of the game.