Back in the summer of 2015, several Bundesliga managers raised concerns about the latest Premier League television deal and the impact the financial power of English teams would have on German football.

Christian Heidel, Mainz’s sporting director at the time, was adamant the German top flight could benefit.

“It is now up to us to bring English money to the Bundesliga,” he told Frankfurter Allgemeine. “The solution is simple, when an English club wants a player from us we right away set our demands way above the actual market value.

“We should simply say thank you, take the money and reinvest it into our scouting network and youth development infrastructure. It will pay off.”

Heidel put that plan into action and Mainz sold Shinji Okazaki for €10million to Leicester City in the summer of 2015. He may have helped the Foxes clinch the most unlikely of Premier League titles but many considered it smart business.

The fee received was reinvested in another Japanese star; Yoshinori Muto. Mainz spent €2.8million on the striker and managed to lure him to Germany despite interest from Chelsea.

Muto broke into the first team seamlessly, replacing the departed Okazaki and scoring seven goals and registering four assists in 20 Bundesliga appearances throughout the 2015/16 season.

His style of play was flexible and allowed then head coach Martin Schmidt tactical manoeuvrability. He paired up the Japan international with attacking midfielder Yunus Malli, who managed to score 11 goals that season, and Colombian forward Jhon Córdoba, who would use powerful frame to create time and space for the aforementioned duo.

As a result, Mainz were unpredictable and managed to finish the 2015/16 season in sixth place, which qualified them for the group stage of the Europa League.

As a result of the vast gulf between the money that can be earned in the Champions League and the Europa League, the competition is often a burden for smaller Bundesliga sides that lack squad depth to compete on three fronts.

Mainz were no exception to the rule, especailly as they were raided after achieving success. Having reached the Europa League, they lost long-serving sporting director Heidel to Schalke, goalkeeper Loris Karius to Liverpool and midfielder Julian Baumgartlinger to Bayer Leverkusen.

Muto, meanwhile, struggled with injuries for the first half of the 2016/17 campaign and missed four out of the six Europa League matches.

Without him in the side Mainz were eliminated failed to make it out of the group stage and tumbled down the Bundesliga tale – in the 12 games he missed the club claimed just four league victories.

Without European football to worry about and Muto returning from injury, Die Nullfünfer hoped they could once again surge up the table. But then the club sold Yunus Malli to Wolfsburg in the January transfer window.

Malli had been a congenial partner for Muto in his first season in the Bundesliga. The attacking midfielder and the deep-lying forward would often interchange positions and confuse defences. But with the Turkish international gone Mainz lacked creativity in attack.

As a result, Muto would only score three goals in his last 16 games as head coach Schmidt would often use the Japanese in the position vacated by Malli. Playing further back his shots per game dropped from 1.5 in 2015/16 to just 0.9 in 2016/17.

Mainz managed to escape relegation, finishing 15th in the Bundesliga, even on points with 16th placed VfL Wolfsburg. Der Karnevalsverein were saved thanks to a better goal difference.

Schmidt was subsequently replaced by Sandro Schwarz and under the 39-year-old Mainz attempted to play with a more cultured approach, which resulted in more attractive football. Unfortunately the club’s results have not improved and they are once again fighting against relegation.

Muto, however, has been able to stay fit throughout, missing just four games because of a back problem in November. He has scored seven goals and claimed two assists in 23 games and while on a first glance that seems like an improvement from last season, his goal to minutes ratio has increased from 204 to 233. 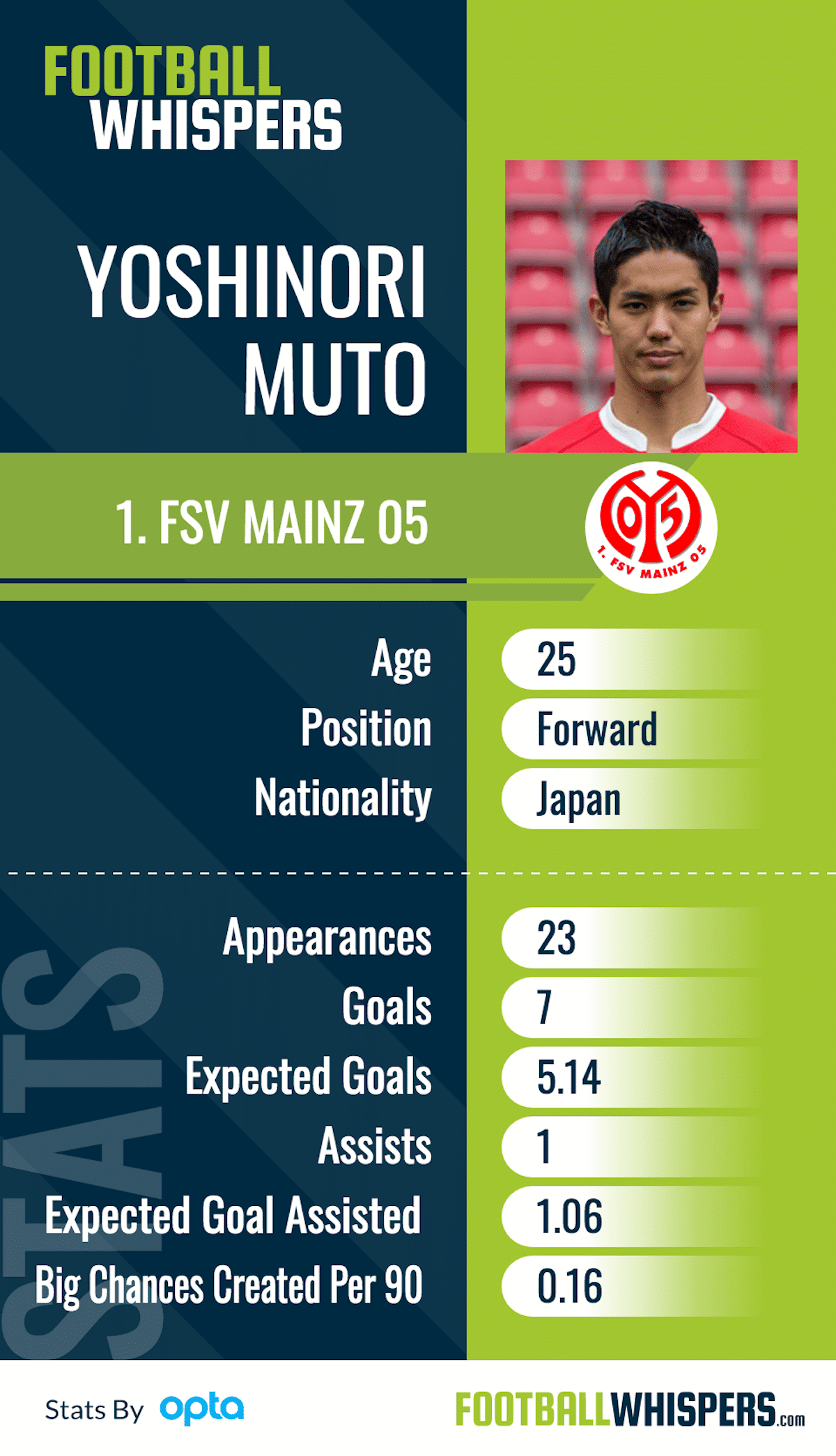 Nonetheless, Muto has been a crucial player for his side this season. His passing percentage has improved from 62.8 per cent to 74.9 per cent and his open play key passes have risen from 0.61 to 0.71 per game. Playing further up the pitch he has also found himself in dangerous positions and is now averaging 1.71 scoring attempts per 90 compared to 1.58 last season.

And with Mainz once again struggling, Muto believes it is perhaps time to move on. His long-term goal has always been to play in England one day, and the Japanese striker feels he is ready for the move this summer. Newcastle United are reportedly considering a move, if they avoid relegation this term.

Mainz can expect to make a handsome profit as Muto will command a transfer fee that is far above the €2.8million they paid in the summer of 2015. And although Heidel has moved to Schalke, his statement remains true; Mainz will once again be able to bring the English television money to Germany.