The summer window may have just closed, but according to reports Bayern Munich’s Thomas Müller is already the subject of interest from Premier League clubs.

Although he is contracted until 2021, that was a deal he signed in 2015, and things have changed since then.

Now. the German international has emerged as an Arsenal, Chelsea and Manchester United transfer target.

The German giants would be at odds to let him go in the winter, but if he’s not a starter at the Allianz Arena and those teams aren’t hitting the heights they imagined, it’s a high-profile move that could provide a massive lift.

All three clubs signed forwards in the summer, bringing in Alexandre Lacazette, Romelu Lukaku and Álvaro Morata in respectively.

Any signing would not only have to fit the team’s current style, but combine well with the other new recruits.

Last season, in his 42 appearances, the German international played as a striker, behind the front-man and on either wing. He is a genuine threat anywhere in the attack.

However, it wasn’t the greatest of campaigns for the 27-year-old. He kicked off with three assists in the 6-0 win over Werder Bremen, but then went nine Bundesliga games without contributing to a goal.

Another three assists came against Hamburg in their 8-0 victory, meaning six of his total of 14 came in just two appearances. Outside of that, he only either scored or set up a goal in eight separate league matches.

Not the sort of productivity you expect from the man who found the net 32 times in 49 games the season before.

Named captain in this campaign’s opener against Leverkusen, he was brought off after 61 minutes, then he had to deal with just 17 off the bench in the 2-0 win at Werder Bremen.

Far from an outcast in Carlo Ancelotti’s team, it’s clear with Franck Ribery’s return from injury, Arjen Robben and Thiago Alcantara, plus Robert Lewandowski up top, Müller has a fight on his hands for minutes in Munich.

It could be that a change in scenery, a new challenge and new team-mates could be exactly what he needs.

Müller is a forward unlike many others. He has all the attributes to play as a No.9. Good in the air, wonderful control and touch with his back to goal. He finishes with ease and is tremendous in the air.

Yet, push him out wide and he is quicker than you think, with vision, guile and the quality in his right-foot to pick a pass or find a cross.

He is everything you want in a modern day forward. Playing two up front and he’ll be comfortable in both roles. He could lead the line on his own, while also taking up the position as wide-man.

Above all, what makes him capable of producing in all these different roles, is his intelligence and movement.

Playing away at FC Koln, you can see from the graphics below an example of Müller’s ability to see the field. 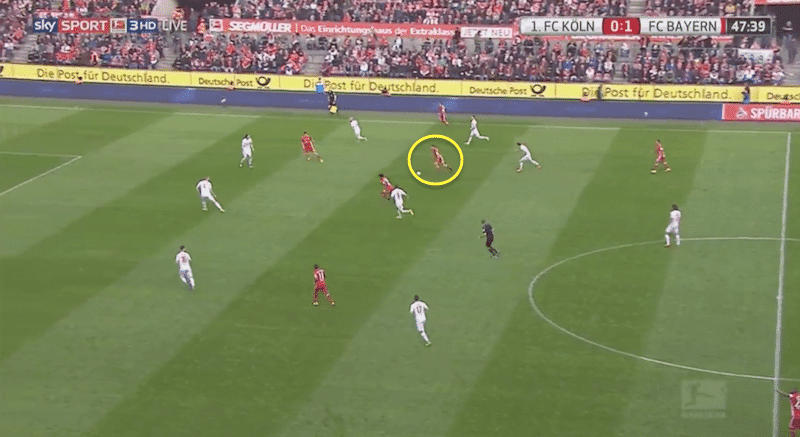 Bayern have four attackers pushing forward, but the home side are matched up well. 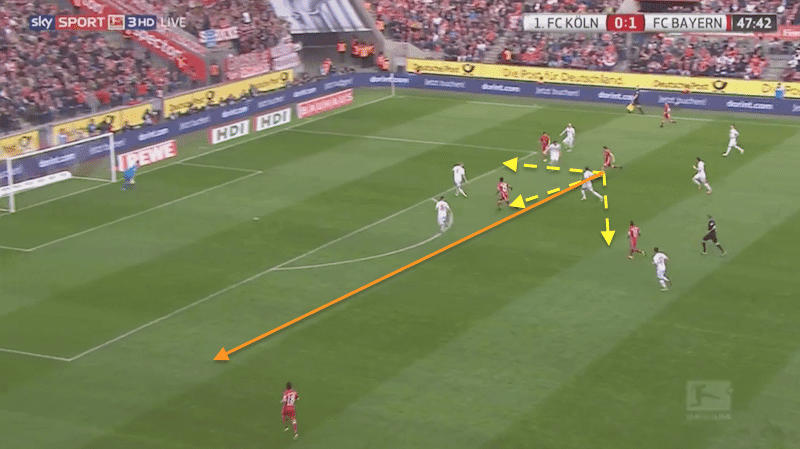 Pushing the ball towards the edge of the box, the man in possession has options. One either side and even the cut back in the middle of the field.

Even when you know the assist is coming you can’t predict that Müller would see the run of Juan Bernat wide left. He picks out the full-back and the Spaniard races in free to finish at the near post.

Picking out the last 20 goals in which the Arsenal transfer target has provided the final ball, you discover a very creative and versatile player. In the graphic below, each red dot represents where he was when he made the play. 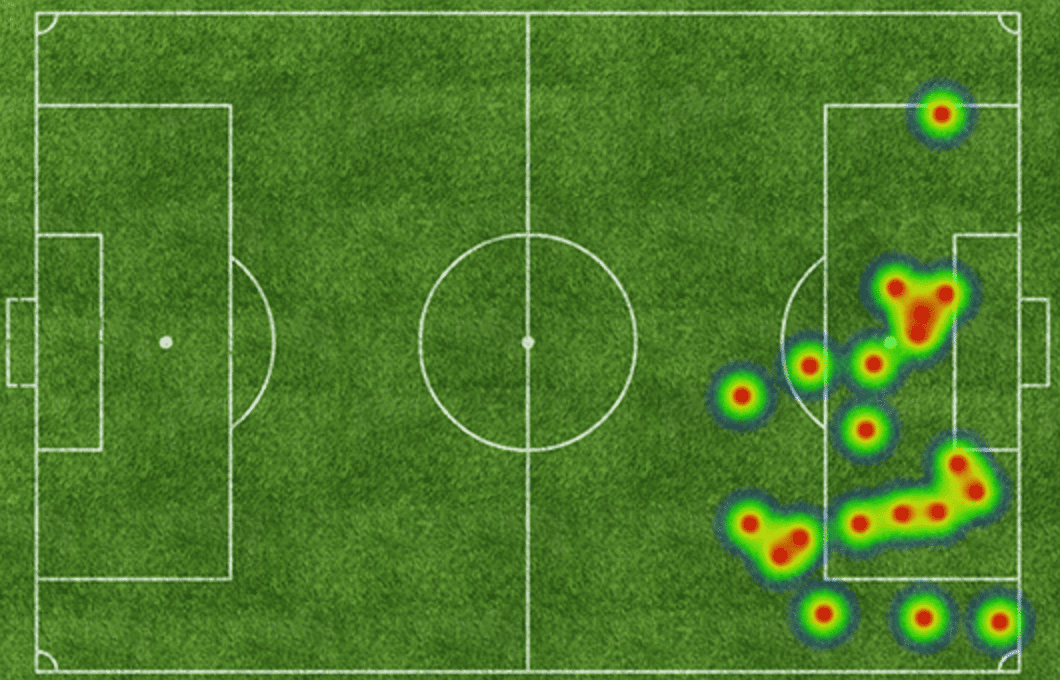 Capable of making almost every type of pass you can imagine. Crosses from wide, little deft flicks when partnering up with Lewandowski or smart cut-backs. He has it all up his sleeve.

Able to get wide, he makes sure his head is up and can see the options in front of him, creating chances from all areas of the 18-yard box.

Where this changes is when you track his goals. It’s almost the complete opposite.

Since 2014, Müller has only scored two Bundesliga goals from outside the area. Almost all his finishes, regardless of where the move starts or what role he’s playing, come from in and around the six-yard-box.

Playing mostly from the right, be it with or without the ball, he is a menace when timing runs inside the box. 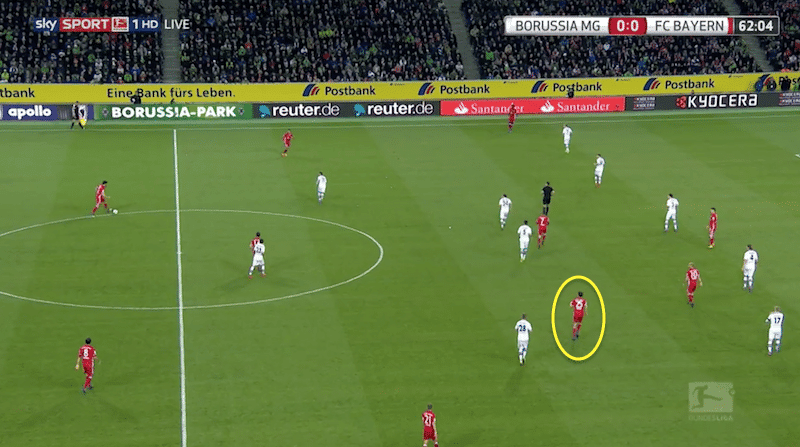 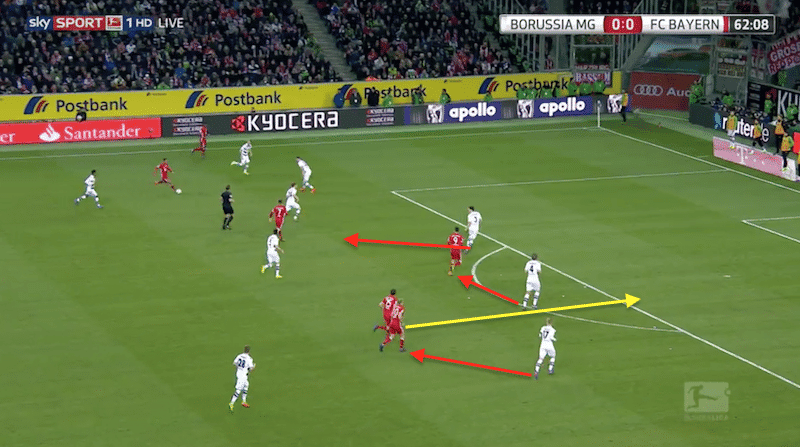 Lewandowski is occupying the centre-backs and Robben’s run is being tracked by the left-back, leaving Müller to ghost into the box.

The German is unmarked and Thiago finds him with a beautiful over the top pass. Müller’s control is perfect and he is able to finish off a move, which although looks simple, needs precision timing to complete. 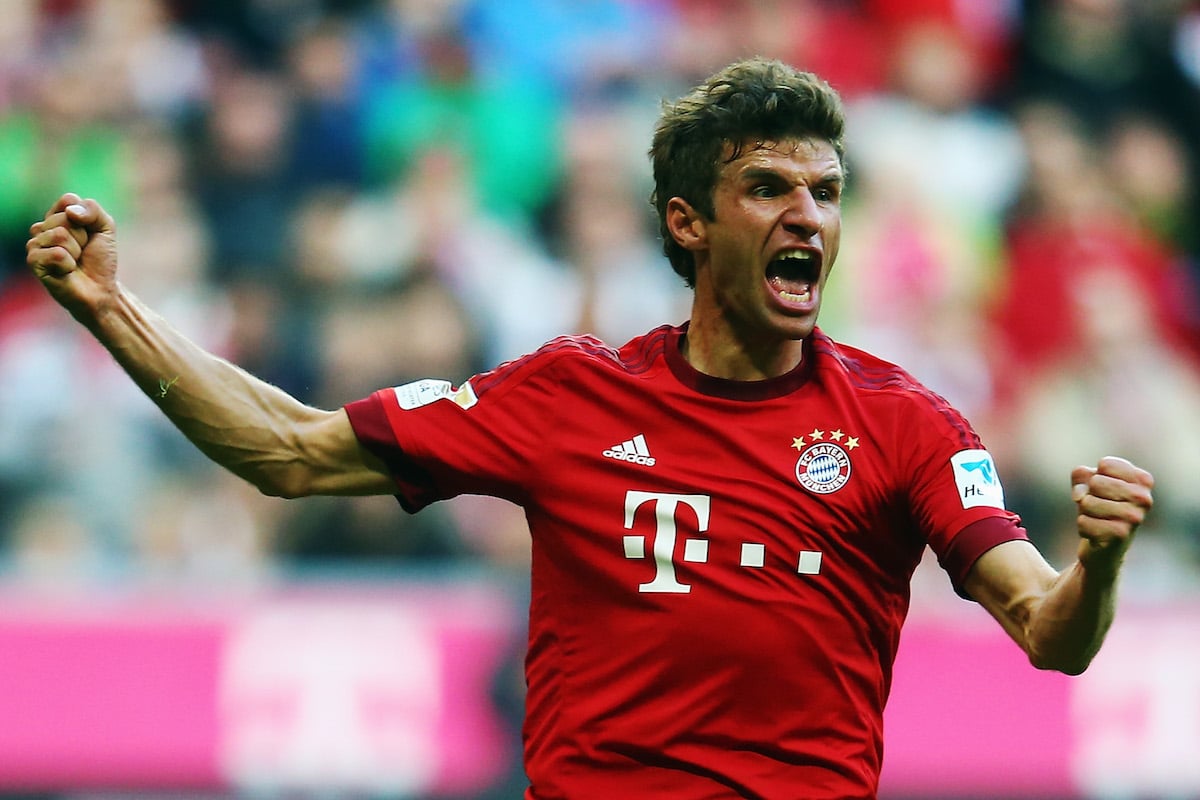 When analysing where he would suit best, the obvious answer is Arsenal.

Arsène Wenger has spoken about the cost to replace Alexis Sánchez and although Müller would play on the opposite flank, he provides the same level of threat, but adds more of a physical presence too.

Adding the Bayern Munich man to the right of the Gunner’s 3-4-3 would be perfect. Defenders would have to cope with the movement of Lacazette, with the runs of Müller and both forwards could switch positions could easily, similar to the runs made by Lewandowski.

It would also open space for the right-wing back, giving the Gunners a chance to overload defences in attack.

There is very little downside to bringing Müller into the Arsenal front-line. In an ideal world, you’d want Sánchez on the left, but replacing the Chilean would be an excellent compromise.

He would offer the same sort of threat in José Mourinho’s 4-2-3-1 at Old Trafford, with the German able to play behind Lukaku too.

You just wonder if he’d have the same freedom at Manchester United under the Portuguese boss.

He’s a player that would fit perfectly into the team’s current ethos. Big and powerful. Able to adapt the attack and give them something different away from the double playmakers of Juan Mata and Henrikh Mkytharian.

Neither make the same runs as the big German and he could be the missing piece of José’s puzzle.

For Chelsea, it’s hard to see where he fits in Antonio Conte’s line-up. Playing either 3-4-3 or 3-5-2, it’s Morata and a smaller option beside him. Playing the Spaniard and Müller would see little space for Eden Hazard, Pedro or Willian – all three key components of the Blues success.

Müller would be left fighting for minutes and that is the exact same situation he finds himself in at Bayern.

If available, both Arsenal and Manchester United would be the best destinations for the 27-year-old, but you can’t help but feel his arrival at the Emirates could be exactly what Wenger needs to fire his team back into the top four.