By Saturday evening even Quique Sánchez Flores' easy charm, rugged good looks and knack for saying the right thing couldn't save him from the inevitable.

Around lunchtime on Sunday, it happened. The Spaniard was fired by Watford again. Just ten games into his second spell.

Sánchez Flores' appointment came out of the blue. The best explanation for his return, three years after his first spell turned sour, was a hope he could make the Hornets hard to beat once again. But an 8-0 shellacking at Manchester City in just his second game underlined the size of the problem he faced.

In the end, Sánchez Flores could not rekindle the magic of his first spell when he had Watford in the top ten before an almighty slump in the second half of the campaign.

Negative tactics and poor in-game changes proved his undoing in his final match in charge against Southampton.

In stark contrast to the bold and progressive Ralph Hasenhüttl, Sánchez Flores sought to protect a 1-0 lead with a defence as robust as tissue paper and was duly shown up as the Saints marched onto a potential pivotal 2-1 win.

His fate sealed, initial reports from The Guardian claimed Chris Hughton, last of Brighton & Hove Albion, would succeed Sánchez Flores. But The Athletic's Watford correspondent, Adam Leventhal, says that is not the case.

What we do know is for Wednesday's daunting trip to second-placed Leicester City it will be Under-23 coach Hayden Mullins who takes charge as interim manager. This is something of a novelty. Watford's hierarchy, known for being ruthless, often wheel the new man out within hours of binning his predecessor.

That was what happened with Sánchez Flores. Javi Gracia was sacked four games into the new season. Within the hour, confirmation of the former Atletico Madrid coach's return followed.

Changing head coach is nothing new to owner Gino Pozzo and CEO Scott Duxbury. Mullins will become the tenth coach to lead the Hornets since Pozzo, and father Giampaolo, purchased the club from Laurence Bassini in 2012. 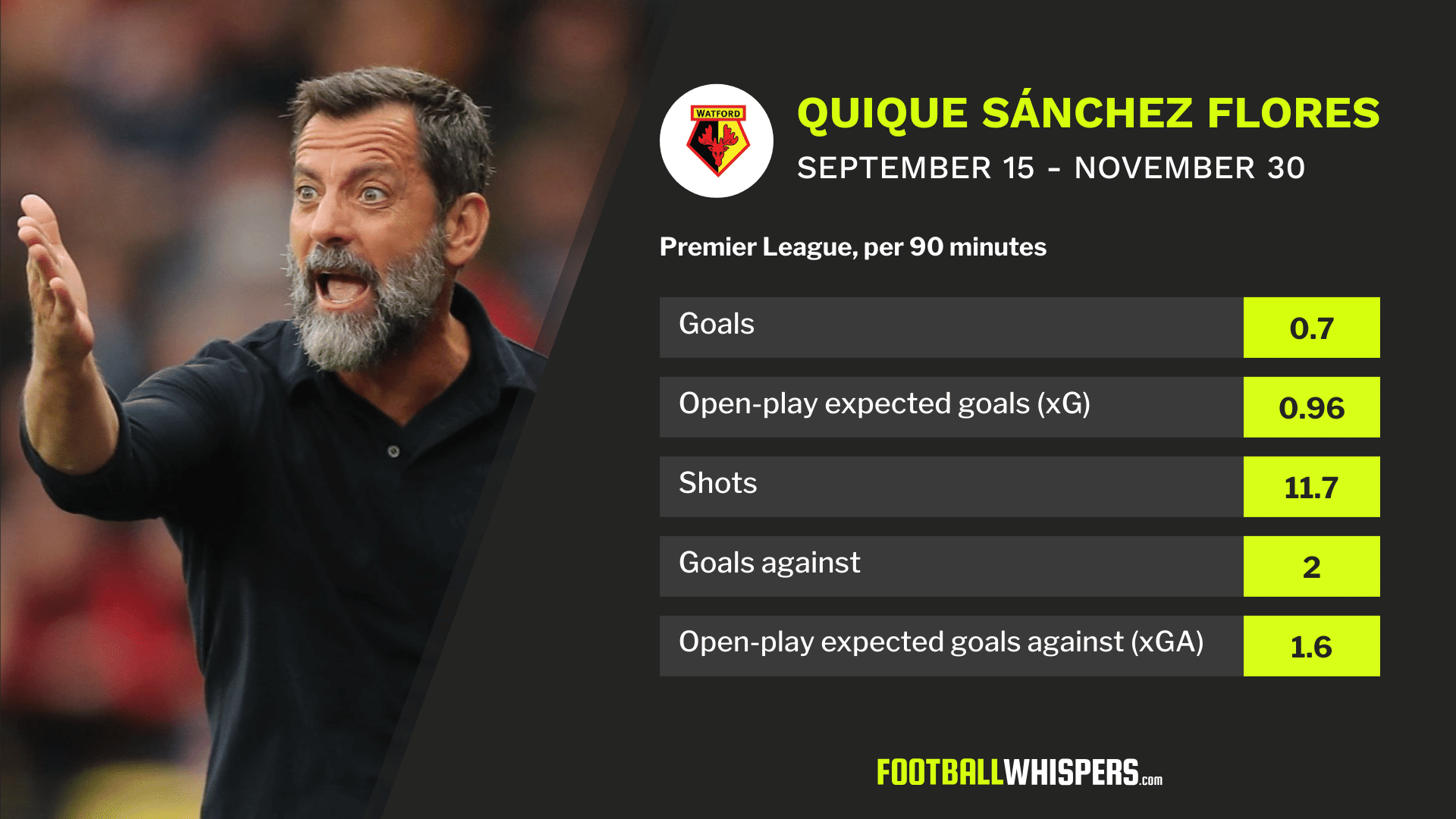 How long he will have the role is anyone's guess – the club have merely stated he will be in charge for the next game – but would it be ridiculous to suggest he should have a little longer?

Mathematically Watford are anything but dead and buried. But the likelihood of a side which has been victorious just one of 14 Premier League games suddenly discovering the winning formula is incredibly slim. Especially with a December which includes Leicester, Liverpool, Manchester United, arch-rivals Crystal Palace and surprise package Sheffield United.

If the Hornets' top-flight stay is to end at five seasons, the smart money says Pozzo and Duxbury will seek to appoint (another) new man to oversee their Championship assault.

Serbian Slaviša Jokanović got Watford up in 2014/15 having never managed in England before, yet perceived wisdom says the country's second-tier is unfathomably hard to get out.

Only natives, or at least those with experience of the league, can steer a team out of its grasp.

Either way, it's unlikely Sánchez Flores would have been retained had he failed to keep Watford up. Either on the basis of failing to fulfil his remit or due to his lack of Championship expertise.

Perhaps, then, Mullins should hold the interim role until the end of the season. He has made an impressive start with the club's under-23 side who sit top of the Premier League Professional Development League South after 13 games.

The former West Ham United and Crystal Palace midfielder is well-respected by senior players at the club and has got his side firing, finding the back of the net 28 times in 13 matches this season.

What might be even more attractive to the Hornets' hierarchy is his relationship with the club's young players. No academy graduate has broken through since Pozzo saved the club in 2012. Given the impending doom they were facing, that is a small price to pay.

But Watford have a proud history of developing their own young players – something supporters would love to see rekindled. If the head coach has to be transient, the odd local lad would be something to cling to.

Strikers Ryan Cassidy and Sam Dalby – an unused sub in the Carabao Cup defeat to Everton – have been around the first-team squad this season. As have midfielders Callum Whelan and Harry Forster. If just one of those could make their first-team debut and stay involved, it would be a resounding and long-awaited success for the club's academy. It might even take the focus off the first team's abysmal displays.

If he fails, Mullins would have done no worse than either Gracia or Sánchez Flores. Relegation would be a blow to Watford but the Hornets are run well. It's almost impossible to envisage the club having to make significant cutbacks in order to avoid financial problems.

Equally, Watford have been here before. When Jokanović was appointed in October 2014, he became the club's fourth head coach of a season which ended with promotion.