According to reports back in July, Jürgen Klopp supposedly informed Liverpool chiefs he wanted to make Thomas Müller a key part of his new-look forward line if there was a chance he could leave Bayern Munich this summer.

SportBild claim Klopp has made it known the possibility of signing the World Cup winner would be too good to turn down. They go on to report the former Borussia Dortmund manager would make the Bavarian hero an integral part of his team.

It's since emerged that Liverpool would have sold Philippe Coutinho this summer if Müller agreed to swap Munich for Merseyside. The player declined and Coutinho's dreams of joining Barcelona were put on hold for the time being.

The versatile forward didn't have the best 2016/17 campaign, scoring just five league goals. It was his worst return in the Bundesliga and 15 shy of previous season's total of 20.

But Müller has not turned into a bad player overnight, especially not at the age of just 27. And context is necessary. With Carlo Ancelotti replacing Pep Guardiola at an Allianz Arena, Müller was, surprisingly, left in limbo.

Instead if playing centrally, or at least given license to pop up in those areas, he played a wide right role. It limited the player, a man so good at manipulating space the world of football created a position just for him – The Raumdeuter.

If you're looking for a definition this is what Football Manager say about the position.

“His main role is to find pockets of space in which to operate. Essentially a wide poacher, the Raumdeuter takes up seemingly harmless positions out wide, waiting for the opportune moment to burst through the defensive line for that telling shot or cross.

“He is difficult for defenders to pick up as he will often drift from his assigned position looking for any opportunity to exploit.

“This can result in quiet periods during which the Raumdeuter may neglect his defensive duties, therefore adequate cover and a strong team shape are key in order to fully utilise his attacking prowess in the final third.”

The arrival James Rodriguez from Real Madrid, a favourite of Ancelotti by all accounts, could see Müller's playing time take a hit and this is why he could well be on the move this summer. There incredible may not be a space for the German international.

Publicly, the Bundesliga champions claim the 27-year-old remains an integral part of their squad with Karl-Heinz Rummenigge saying: ‘Both the club and Thomas agree on the assessment of last season – it wasn’t a good one.

“Thomas is still not for sale because he’s a perfect fit for Bayern. This is not a matter of discussion. Thomas knows that he has to deliver a bit more, but this isn’t a problem.”

But, truth be told, Bayern aren't going to say anything which would decrease his value, especially not when his current deal ties him to the club until 2021.

Liverpool scored 78 goals in the Premier League last season and, when Klopp was able to name his first-choice XI, the Reds had one of the most frightening attacks in the whole of Europe.

Seamless transitions, quick combination play in the final third and goals from a variety of sources. They were rampant and looked, in parts, unstoppable.

However, one injury and it just wasn't the same. Klopp has looked to address this problem and has already added Mohamed Salah to his attack, paying a club-record £39million for the former Roma winger.

While he's one of the best in the world at what he does, Liverpool have arguably the closest player to him in the shape of Roberto Firmino, the club's new No.9.

Why he wouldn't displace Firmino

As Martí Perarnau puts it in his book Pep Guardiola: The Evolution: “Müller has lost more balls than any other Bayern player over the past two and a half years. He doesn’t dribble particularly well and he’s never been the fastest guy.

“His headers are unexceptional and he could use some work on his shooting. He loves to press but often does so with his head turned towards his own team-mates. And yet this is a prodigiously talented footballer.”

Most teams would benefit from having Müller in their starting XI just because of his impact on the rest of the attack. But most sides don't have Firmino at their disposal. 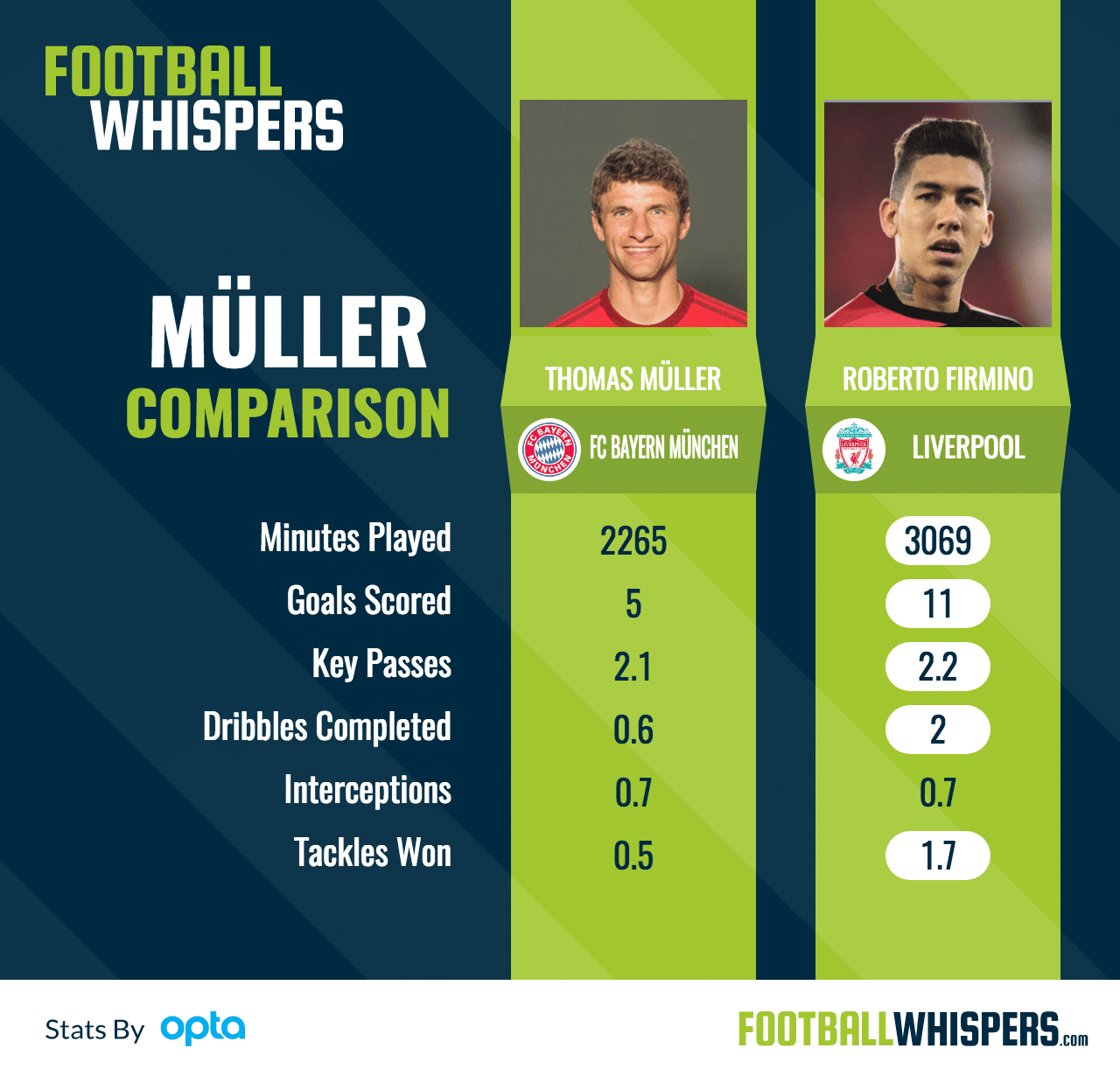 The Brazilian is by no means the perfect striker; His touch is erratic at times and he's not clinical enough, but he's a key cog in Klopp's system

He's selfless instead of selfish and the team benefit from his presence. He creates the space for the likes of Philippe Coutinho and Sadio Mané to do the damage.

And while he's nowhere near match fit yet, there have already been glimpses in pre-season that Salah is going to have a lot of joy playing in beside and around Firmino.

He's why so many supporters believe Liverpool don't need to go out and sign a prolific forward this summer. After all, as cliche as it sounds, the whole is greater than the sum of the parts. The Reds with Firmino leading the line are a better team than when he isn't doing that job.

Context, as always, is needed when looking at the stats in the graphic. Müller was playing in a dominant Bayern side while Firmino was shifted around the team to cover for injuries.

Yet despite this, the former Hoffenheim man comes out on top when looking at key passes, dribbles completed, goals scored and tackles won.

This isn't about individuals being pitted against one another though. There are arguments for Müller being better than Firmino and vice versa. It's about who is the better fit for Liverpool, and it appears as though Klopp believes it's Firmino.

If the Reds wanted a striker this was the summer to make their move with so many up for grabs. They have the money – as proven with their bids for Keïta and Virgil van Dijk – and yet they've not delved into that market.

The reason for that is Firmino. The 25-year-old is a firm favourite of Klopp's, he's just been awarded the famous number 9 jersey, meaning it's unlikely he'd drop to the bench to accommodate Müller. And the German definitely isn't leaving Bayern to sit on the bench at Anfield.

It's a link which made very little sense. If Müller does leave Bayern it's unlikely Liverpool will be involved in that conversation.