As the Premier League draws to a close this weekend there is only one meaningful outcome yet to be decided. Manchester City’s win in midweek all but assured them a top-four place, save for a meltdown against a Watford side in woeful form, leaving just one place up for grabs.

Liverpool are in the driving seat to secure it, one point and one place above Arsenal with a home game against relegated Middlesbrough. On reflection a Champions League finish would certainly be a great achievement.

While Jürgen Klopp has enviable quality in attack, the Reds have the weakest squad in the top six and, arguably, the most modest starting XI to boot.

It promises to be an interesting summer at Anfield with a number of new signings required to ensure that Liverpool can compete both domestically and in Europe.

The question is whether the notion of just competing in both is an acceptable one to the board, fans and manager. Having sat third for much of the season the Merseysiders’ natural progression would be to at least be able mount a title challenge, if not win it outright.

However, with Manchester United, Manchester City and, in an unprecedented turn of events, even Arsenal tipped to spend big ahead of next season, the Reds may need more than just squad depth.

There are players in the regular line-up that still haven’t wholly convinced of their ability to push this side to the next level after all.

Simon Mignolet has had a decent season but, understandably, has his critics while the same could be said of Dejan Lovren. Then there is Milner at left-back, who has been predictably reliable but is not a left-back.

Meanwhile, Emre Can, Gini Wijnaldum and, arguably, even Jordan Henderson are very good players but couldn’t be classed as great.

That’s overlooking the most solid if unspectacular player of the entire team.

Nathaniel Clyne arrived with a reputation as a very promising full-back but never really seemed to develop. Now 26, the former Southampton man remains a dependable player but he’s faced no competition since his arrival to really push him on.

Clyne is one of a now rare breed of full-backs that isn’t discernibly stronger in defence or attack. While that’s not a weakness, the fact that he doesn’t really excel in either could become a problem. He’s a six or seven out of ten player week-in week-out – not a quality of performance that will win you trophies.

It’s true that you need players you can rely on not to disappoint – Liverpool have plenty of players that are guilty of as much after all – but with all the talk that the team needs a better keeper, a better centre-back or a better left-back, Clyne’s position has never come under scrutiny because he goes about his work quietly.

If this season in the Premier League has taught us anything, though, it’s the importance of high quality full-backs in the modern game, or at least ones that can offer a threat in attack.

Chelsea and Tottenham have been head and shoulders above the rest and have been able to call upon the top performing wing-backs in the league.

Klopp’s system is different. He’s one of only three coaches not to experiment with a back three this season – but he doesn’t really have the option to.

Alberto Moreno would suit the role on the left more than Milner had he wanted to try out a new system. While Clyne offers decent pace and intent at times, his decision making and end product in the final third is often found wanting.

He was viewed as an attacking full-back at St Mary's and, while the work that he has put in to improve his defensive game deserves credit, if anything he has regressed at the opposite end. He is not playing on the instinct that made him such a promising talent early in his career.

Clyne looks to take the safe option more often than not now which has led to an increase in pass accuracy, from 78.6% last season to 83.1% this, but his dribbles, for example, are at a low in his Premier League career (0.6). Previously he would look to utilise his considerable speed to get to the byline, now Clyne tends to take a touch and pass (the buck).

If this seems unnecessarily scathing, it’s because this is a player that has the tools to do so much more. Whether it’s a lack of confidence or competition – Trent Alexander-Arnold’s progression could change the latter – Clyne’s career is at risk of stagnating. 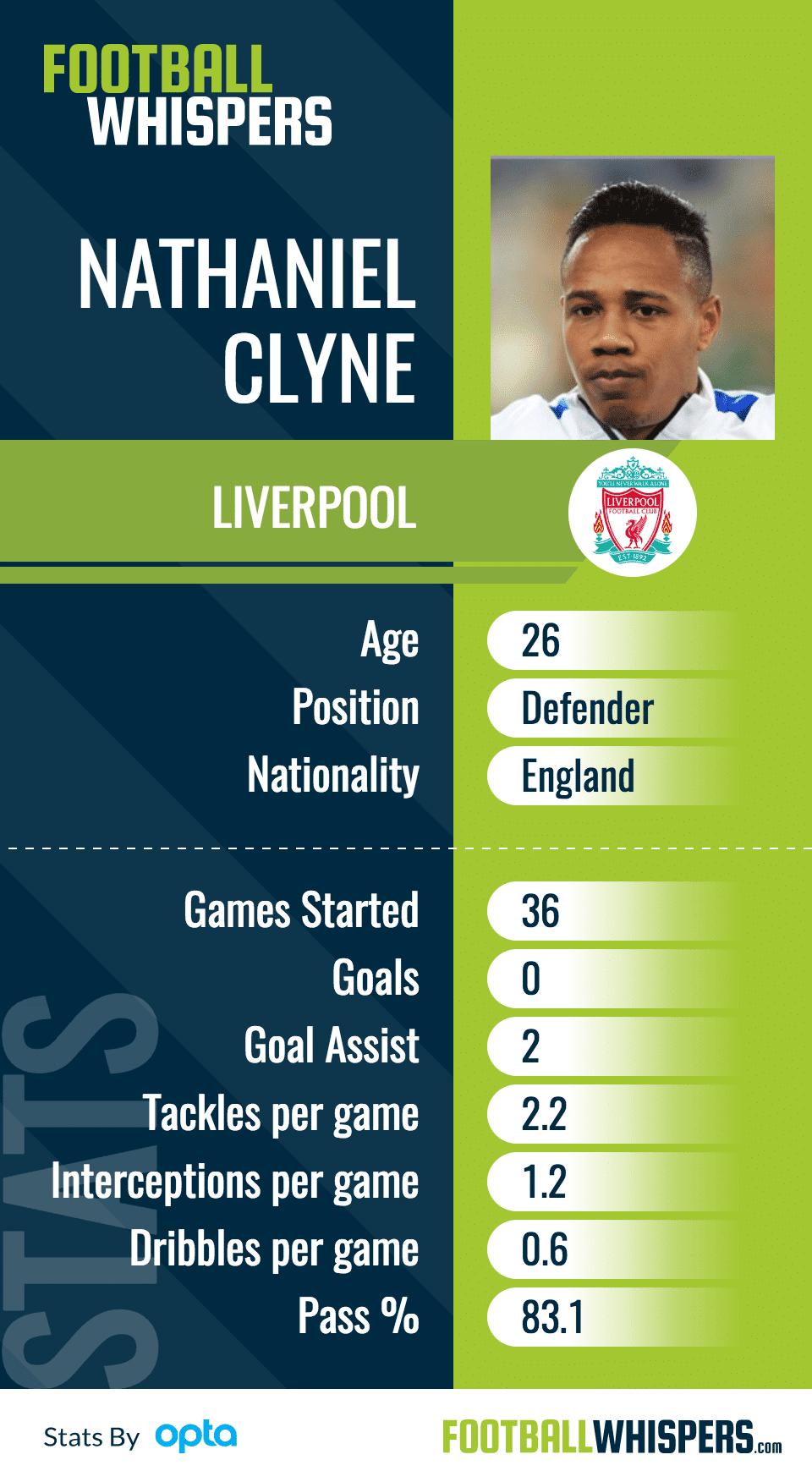 The Palace graduate was, after all, England’s first choice right-back not long ago. Not only is he behind Manchester City transfer target Kyle Walker in that regard now, he can’t really be considered in the same league.

There’s a case to be made that Kieran Trippier should now be above him in the pecking order too. The former Burnley man has registered more Premier League assists in 476 minutes of action (3), than Clyne has in 3234.
A Mr. Dependable billing may not seem like a negative but Liverpool already have the ultimate in that respect in James Milner. To have two starting full-backs that won’t let you down is a positive. But to have two that are unlikely to offer the side a threat in attack is a real problem for a side with the targets of Liverpool.
Simply put, if there are those out there that believe Milner isn’t the type of player to push the club on, then neither, at the moment, is Clyne.
He needs to rediscover the verve that attracted the Reds’ interest in the first place, and it isn’t too late. However, as things stand Clyne is just another good player at a club aspiring to be great.