After Manchester United‘s withering defeat to Manchester City on Sunday, José Mourinho legitimised suggestions that football has left him behind.

One of the foremost signs of the sport's evolution in the social media era is the prevalence of stats.

Nobody has ever proclaimed that statistics are the definitive tool with which we should analyse football.

No, the old adage goes that ‘stats don't tell the whole story.' Well, whether Mourinho likes it or not, they tell a lot of it and, in the case of Manchester United Football Club, they lay bare the ever-widening chasm that lies between them and the teams above.

Nobody needed stats to deduce that David Silva, or indeed his namesake Bernardo, ran United ragged. Nor did they need stats to realise how ineffective Jesse Lingard, Marcus Rashford and Anthony Martial were.

Mourinho, facing the Sky Sports cameras after another vexing afternoon on the touchline, came out swinging.

“So, when I analyse the game today, I think the difference was, you can go for stats,” the Portuguese said. “That's the way people that don't understand football analyse football, is with stats.”

Luckily for us, we're not going to use the Football Whispers Lab to analyse United's performance against City. Instead, we will use stats to explain why Mourinho's squad, assembled for nearly £400million, find themselves in eighth place nearly a third of the way into the Premier League season, languishing in between Watford and Everton with a goal difference of -1.

This is not focused on United looking hopelessly second-best at the Etihad. The aim is to expose their indisputable signs of regression.

Much has been written on Mourinho's tactics during his tenure at Old Trafford. Mostly negative, the central theme appears to be that the former Chelsea and Real Madrid boss has failed to establish a clear identity.

Whereas City are a fast, ruthless machine under Guardiola and Liverpool have been transformed into a devastating unit under Jürgen Klopp, it's difficult to pin down what United's strengths are.

They're certainly not leaders in winning possession high up the pitch. Klopp, Guardiola, Pochettino, Sarri; their philosophies may differ slightly but the Premier League's leading tactical minds all seem to be in agreement that a turnover in possession close to the opponent's goal is certainly worth pursuing.

City, Liverpool, Chelsea, Arsenal and Liverpool all feature in the top eight of the ‘Possession Won in the Attacking Third per Game' column, but you would have to go all the way down to 18th to find United, who manage it just 2.5 times per 90 minutes. Tied with 19th-placed Fulham, only Brighton & Hove Albion have a lower average than Mourinho's men.

Is this a new trend? Not exactly. United were hardly pressing pioneers under David Moyes or Louis van Gaal, but at least last season Mourinho's side were much more effective at stopping the opponents pass by the first line of defence, averaging 3.92 attacking third possession gains per 90. That was enough to rank them seventh, but even that stat was dwarfed by City's 5.73.

With agile, athletic forwards such as Martial, Rashford, Lingard and Alexis Sánchez – who reportedly has already had enough of life under Mourinho – United should be able to press as a cohesive unit, but on too many occasions we have seen a passive side, scared to take risks and seize the initiative.

United are, admittedly, better at winning the ball in midfield, with 25.33 per 90, up from last season's 24.6, but their inability to construct meaningful attacks on a consistent basis negates any industry in the middle. 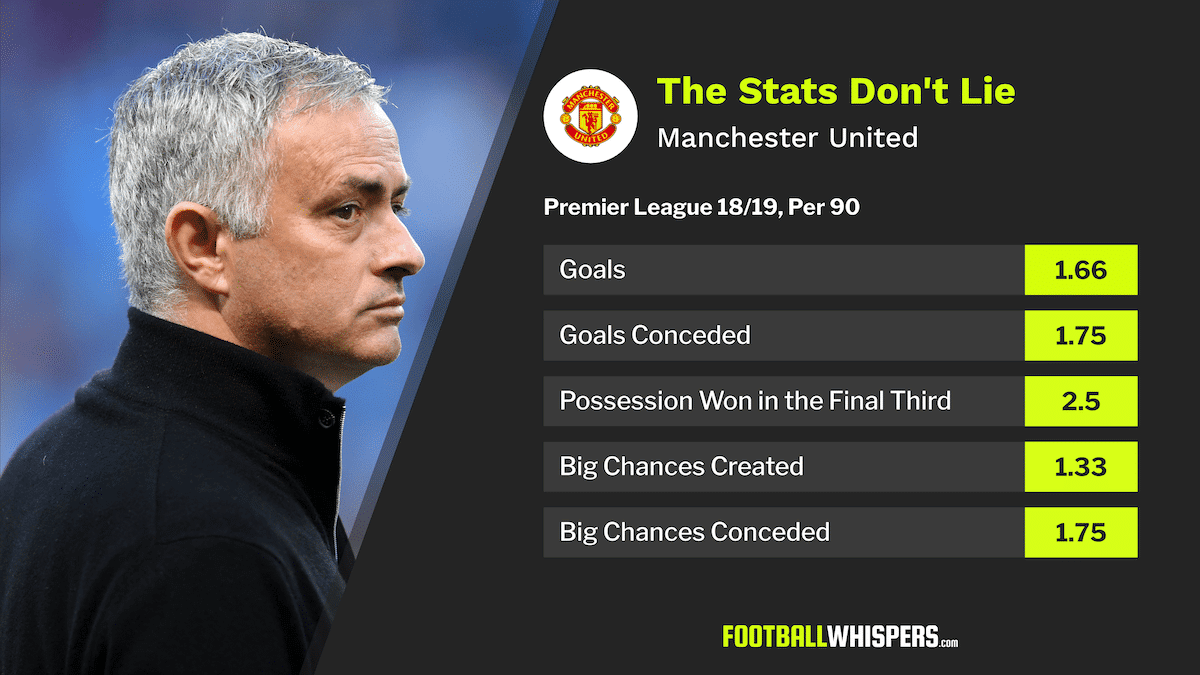 This is reflected in the fact that the Red Devils have created just 16 big chances this season (against 21 conceded), fewer than half of City's total of 35 and fewer than Bournemouth, Leicester City, Watford, Wolverhampton Wanderers and Everton.

Whereas last season United were creating 1.57 big chances per game, that number has dropped to 1.33. Creating chances is fundamental to winning football matches and United are lagging behind their rivals.

And it shows when United come up against an elite side or a top-six rival. In five games this season, (City, Chelsea, Juventus x2 and Tottenham), United have created a total of 31 chances, compared to 81 from their opponents, thus showing that, in the ‘bigger' games, Mourinho's men consistently struggle to lay a glove on their opponents.

This has never been more evident than in the earlier stages of the home defeat to Juventus and Sunday's derby defeat. In the opening 45 minutes at Old Trafford, United chased the shadows of the Juventus players, who completed 200 more passes than their hosts while, at City, the men in red had completed a meagre five passes – one of which was in the attacking third – by the time David Silva opened the scoring in the 12th minute.

Although Juve and City are arguably the two finest teams in Europe right now, the two games served as a sobering reminder of how inferior United are. Yes, late heroics clinched three dramatic points in Turin but, even then, they had to rely on an own goal and Juve's profligacy in front of goal.

Here are all the events of the opening 12 minutes of Manchester City v Manchester United yesterday, ending in Silva’s opening goal.

Juventus’ pass completion is 93.4%. They have completed over 200 passes more than their hosts. https://t.co/srHNzUU41q pic.twitter.com/C65tCCJR8Q

If the win over Juventus temporarily distorted the picture, a humbling lesson in the art of passing, penetrative football by City brought United fans crashing back down to reality.

A lot has already been said about the defence, but it's certainly worth noting that 21 goals conceded after 12 games is United's worst return since 1966. Another three were shipped against City – the fourth time David de Gea has picked the ball out of his net at least three times in the same game this season. At this rate – 1.75 goals conceded per game – United are on track to match the 28 goals they conceded during the 2017/18 campaign around mid-December.

There are no signs of improvement. United are too easy to pass around, too easy to score against and too easy to dominate. Passive, penetrable and devoid of a sense of direction, Mourinho – under whom clubs notoriously regress during his third season in charge – now faces a considerable challenge in getting United into the Champions League next season. 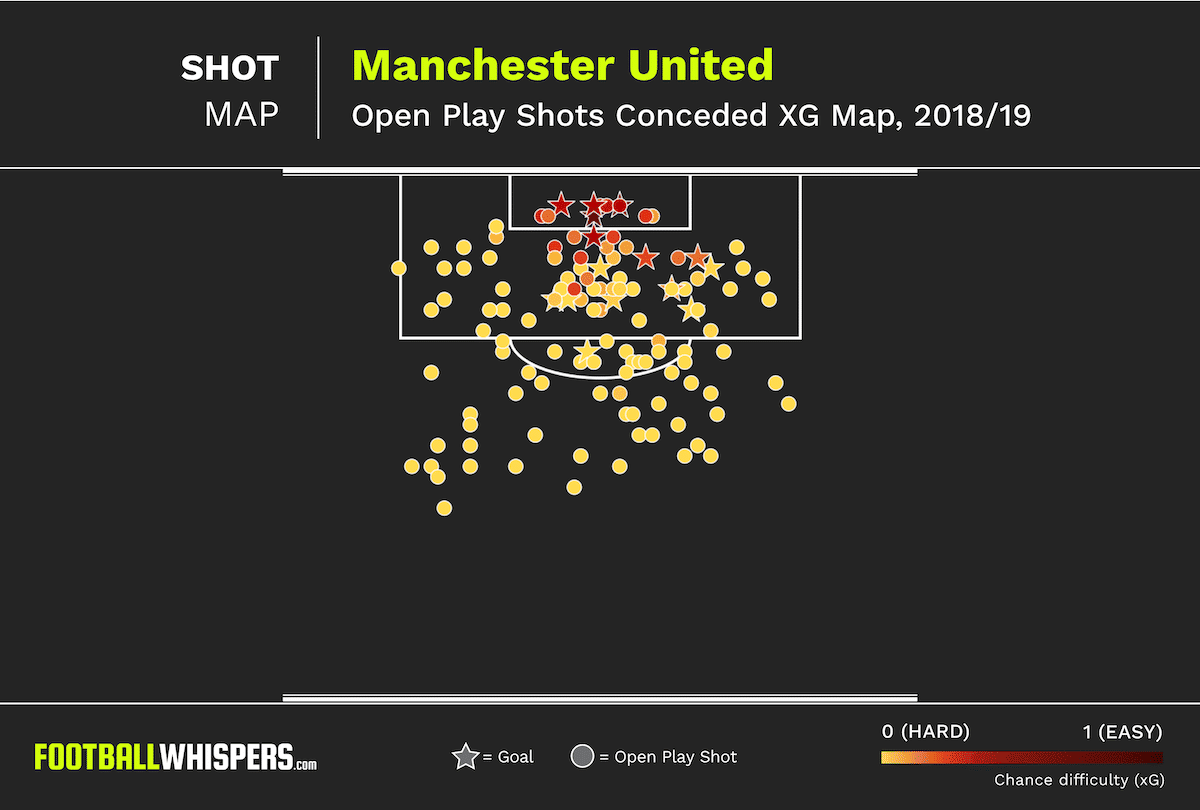 If a sixth-placed finish during the 2016/17 season was deemed acceptable on the basis that he led United to Europa League and League Cup successes, and second place last term was construed as evidence of progression on the domestic front, will sixth be enough to keep him in the job beyond next summer? Unlikely.

Perhaps Mourinho does deem himself above trawling through stats. If he did pay attention to them, however, he would see the state in which United find themselves. Adrift of City after 12 games, United are sleepwalking through this season, with insipid performances continuing to shatter any lingering faith fans had in the current regime.

United have developed a knack for late comebacks in the second half of games after falling behind. Now, they need to summon that character and salvage their season or the club will almost certainly need to search for their fourth manager in the post-Ferguson era.