José Mourinho has a number of holes in his Manchester United team to plug this summer. He’s already made some progress on this, signing Brazilian midfielder Fred and Portuguese right back Diogo Dalot before the World Cup. That gives the Old Trafford side something of a head start on their summer rebuild, but there is still much to be done.

A pressing priority for Mourinho was presumed to be the search for a new left back. The Portuguese coach has long held a mistrust of Luke Shaw, calling out the 22-year-old multiple times over the past two seasons, and so Ashley Young has been shoe-horned into the position. First used as a left back by Louis Van Gaal, Mourinho has now completed the former winger’s conversion.

Young was actually one of United’s most consistent performers over the 2017/18 season, nailing down his place in the starting lineup over the course of the campaign.

So impressive was the former Aston Villa and Watford man, he forced his way into the England squad for the World cup. But at 32 years old, Young was always viewed as a short-term fix. This summer, it was presumed, a long-term successor would be found.

Indeed, United have been linked with a number of potential candidates including Celtic’s Kieran Tierney and Juventus’ Alex Sandro. Efforts to sign the latter seemed to be coming to a head in recent weeks, but if recent reports are to be believed those efforts have now been put on the back burner. Mourinho might decide to make do with Shaw and Young for another season.

This looks to be a risky move. Pep Guardiola has demonstrated last season at Manchester City the importance of full backs, splurging nearly £150 million on the signing of Danilo, Benjamin Mendy and Kyle Walker last summer. Those three players, particularly Walker, helped propel the Citizens to a record-breaking Premier League season. 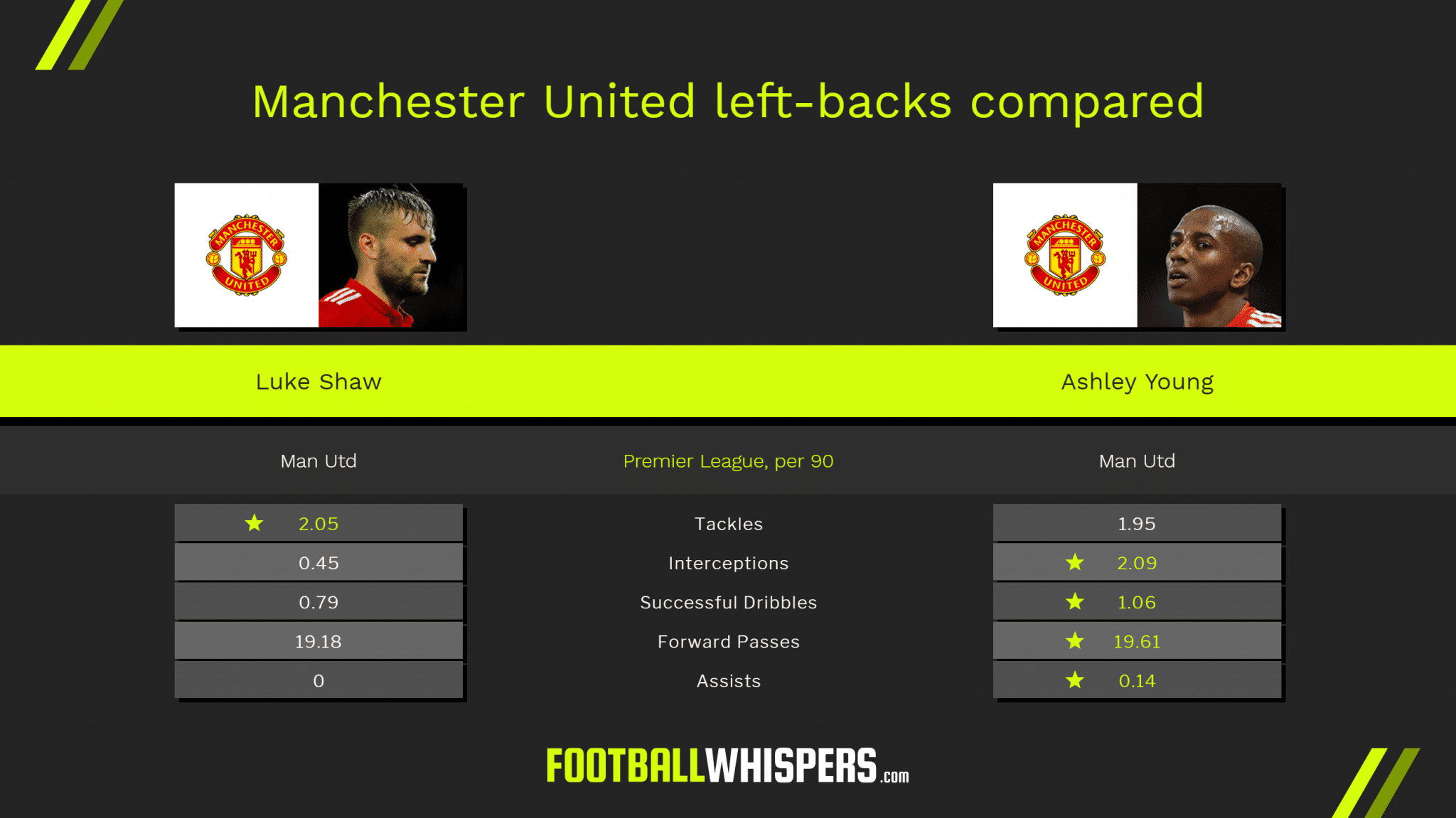 As a passing hub, Shaw looks to be a better option than Young, with the former Southampton defender making 46.25 accurate passes per game compared to the latter’s average of 37.61 per game. His passing accuracy rate of 84.9 per cent is higher than Young’s accurate rate of 79.5 cent, but that is largely down to the fact that, generally speaking, Shaw takes fewer risks than his rival for the No.3 shirt.

One difference between the two players is in the number of long balls they play. Young attempts many more per 90 minutes than Shaw, averaging 7.98 compared to Shaw’s average of 2.74. This appeals to Mourinho, who wants his teams to adopt a direct style of play. With Romelu Lukaku as the focal point of the attack, these long passes can prove useful. Young’s accuracy of 43.7 per cent on his long balls is also rather impressive.

Young is also shown to be a more effective as a creative outlet. His Expected Assist value (xA) stood at 3.98 last season, while Shaw’s stood at just 0.29 over the course of the 2017/18 campaign. This perhaps isn’t surprising given Young’s crossing ability. Even as he enters the twilight of his career, Young remains one of the best crossers of the ball in the Premier League. He has a wicked right foot.

But being right-footed presents Manchester United with an issue. At times, Young can be predictable as a left-back. Defenders know to expect him to cut inside on to his preferred foot. What’s more, this can result in a lack of balance on that flank for United, especially when Anthony Martial, who also likes to cut inside, is playing ahead of Young.

Defensively, there’s not much between the two players, with Shaw averaging more tackles per game last season (2.05 per 90 compared to 1.95 per 90), but Young averaging more interceptions per 90 (2.09 compared to 0.45). In line with what is expected of modern full backs, Shaw and Young are better defined by their attacking exerts rather than what they do in the defensive sense.

On the right side, Mourinho will be able to call on Dalot, who has been signed from Porto this summer. That signing suggests the Manchester United manager appreciates the value of having natural full backs, but this is in contradiction to his reported stance on the left-backs he currently has.

If he sticks with Shaw and Young, that will be a weak link for opposition teams to expose next season.