The latest Three Lions squad announcement created several headlines. Jadon Sancho, the 18-year-old assist king of Europe, was in. So too James Maddison after impressing with Leicester City in the English top flight. And then there is Mason Mount.

The 19-year-old was tipped for stardom at a young age; he was a standout player in the Chelsea academy and impressed at various England youth levels. Yet history tells us the majority of highly-rated prospects often fail to make the grade, especailly if they're coming through at Stamford Bridge.

Mount is different, however. He is as strong-minded as he is talented. It was his decision, at just 18, to leave England and go on loan to Dutch side Vitesse Arnhem. His choice was vindicated by the 39 appearances, 13 goals, ten assists and 2017/18 Player of the Season award he claimed.

He returned to Chelsea this summer but wasn't deemed ready for the first team. So few are, much to the disappointment of the Blues' fans.

Ajax and PSV, two sides in the Champions League, were interested in Mount but the Premier League club felt his development would be better suited by joining Championship side Derby County, who were under the guidance of Chelsea legend Frank Lampard.

That decision has again proven the right one. Mount has featured in every game for the Rams, 15 in total, has struck five goals and claimed one assist. He has also played the most key passes (24) of any player in the division.

That, along with impressing while training with the senior squad prior to the World Cup, has ultimately been enough to convince Southgate that he's ready for senior international football.

“We are always conscious of the balance of how quickly we put those young players in and raise expectation around them, we want to make sure that we don’t detrimentally affect their development,” Southgate explained when asked about Mount, Sancho and Maddison's selections

“Quite a few of them have trained with us at various times anyway, so we’re excited to see them.” 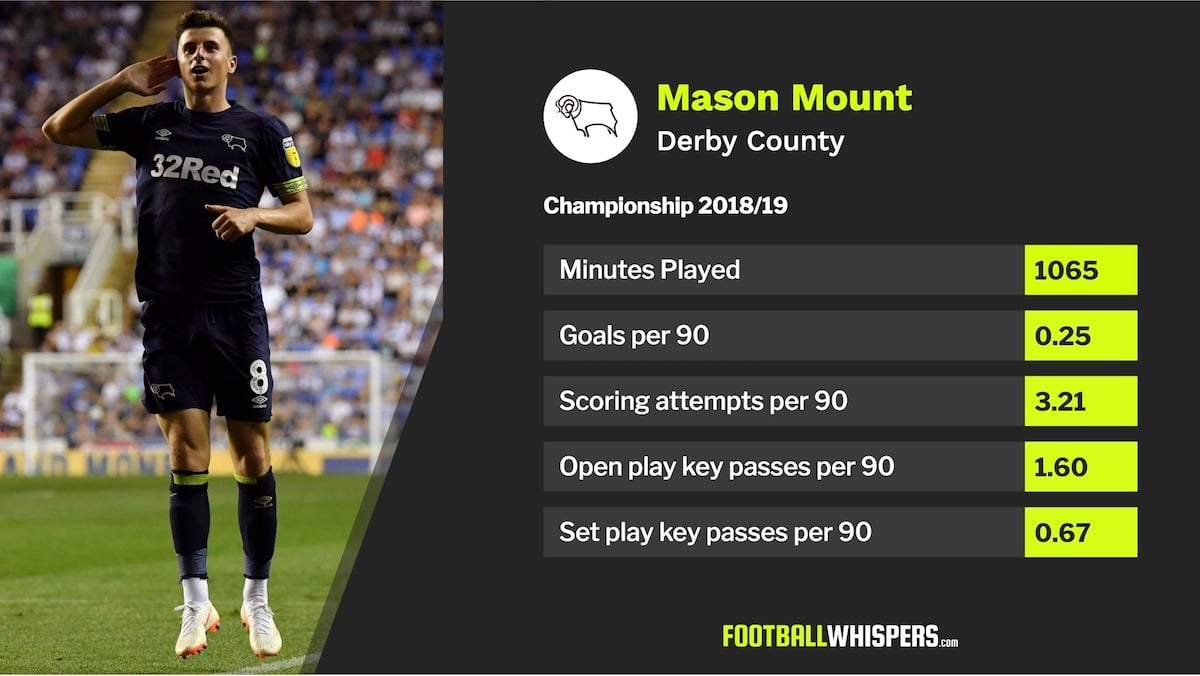 Sancho's call-up has seen the winger receive widespread acclaim for stepping away from English football and moving to Germany's Bundesliga with Borussia Dortmund. It was a brave choice and one that has paid off handsomely with him impressing on a weekly basis, albeit usually off the substitutes' bench.

Yet Southgate turning to Mount is just as, if not more, momentous for English football's young players. It sends a clear message that playing regular football, be it in the second tier, will be rewarded more than sitting on the substitutes' bench in the Premier League.

That is why Mount has jumped ahead of Chelsea teammate Ruben Loftus-Cheek in the England midfield pecking order.

The 22-year-old went to the World Cup with the Three Lions this summer and started in four games as Southgate's side finished fourth in Russia.

But this term, under Maurizio Sarri at Chelsea, he has played just 99 minutes of action, less than ten per cent of the game time Mount has been given at Derby.

More detrimental for Loftus-Cheek though is that in his senior club career he's played 3,264 minutes of first-team football, the equivalent of 36 matches. Mount, three years his junior, has already racked up 4,339 minutes, or 48 full games.

It is little wonder then Loftus-Cheek's development has stalled; he's certainly not what he should be at this point in his career. But that is as much, if not more, on Chelsea than the midfielder.

Mount hasn't gone down the same path – perhaps learning from the experiences of his Chelsea teammate – and in doing so has broken the mould for what it takes to reach the national team.

For countless talented young players in Premier League academies he, just like Sancho, is someone to follow.