It was a tedious debate yet one that split English football fans for years. Steven Gerrard and Frank Lampard, who should be England's go-to midfielder? There was no right answer.

Lampard was the goalscoring engine of hugely successful Chelsea sides. Gerrard the heartbeat of Liverpool teams which too clinched major honours. Both were world-class midfielders and match-winners.

It's why almost every England head coach crowbarred both into their starting XIs, with mixed success. Neither Lampard or Gerrard ever truly flourished in a Three Lions shirt but the former is currently his country's ninth all-time leading scorer while the latter also netted 21 international goals.

Current England boss Gareth Southgate has not had such a problem during his tenure, but that could be about to change with the emergence of Chelsea's Mason Mount and Leicester City‘s James Maddison.

The two attacking midfielders have made fine starts to the 2019/20 Premier League campaign. Mount has four league goals and been an almost ever-present in the Blues side, now coached by Lampard, while Maddison has shone for Leicester and also netted twice, against Tottenham Hotspur and Liverpool.

Both earned deserved call ups to the latest England squad for the European Championship qualifiers against the Czech Republic and Bulgaria and soon debate sparked over who should start.

Some favoured Mount. Others Maddison. And there was little middle ground between the two parties. It was all rendered moot in the end, however, as Maddison was forced to withdraw from the squad due to injury.

So the debate is on ice, but it will return the next time both players are selected for the England squad which, given their form, is likely to be the next set of international fixtures in November.

Will there ever be a definitive answer? Of course not. Football is, after all, subjective. Yet could the two players be incorporated into the same team? 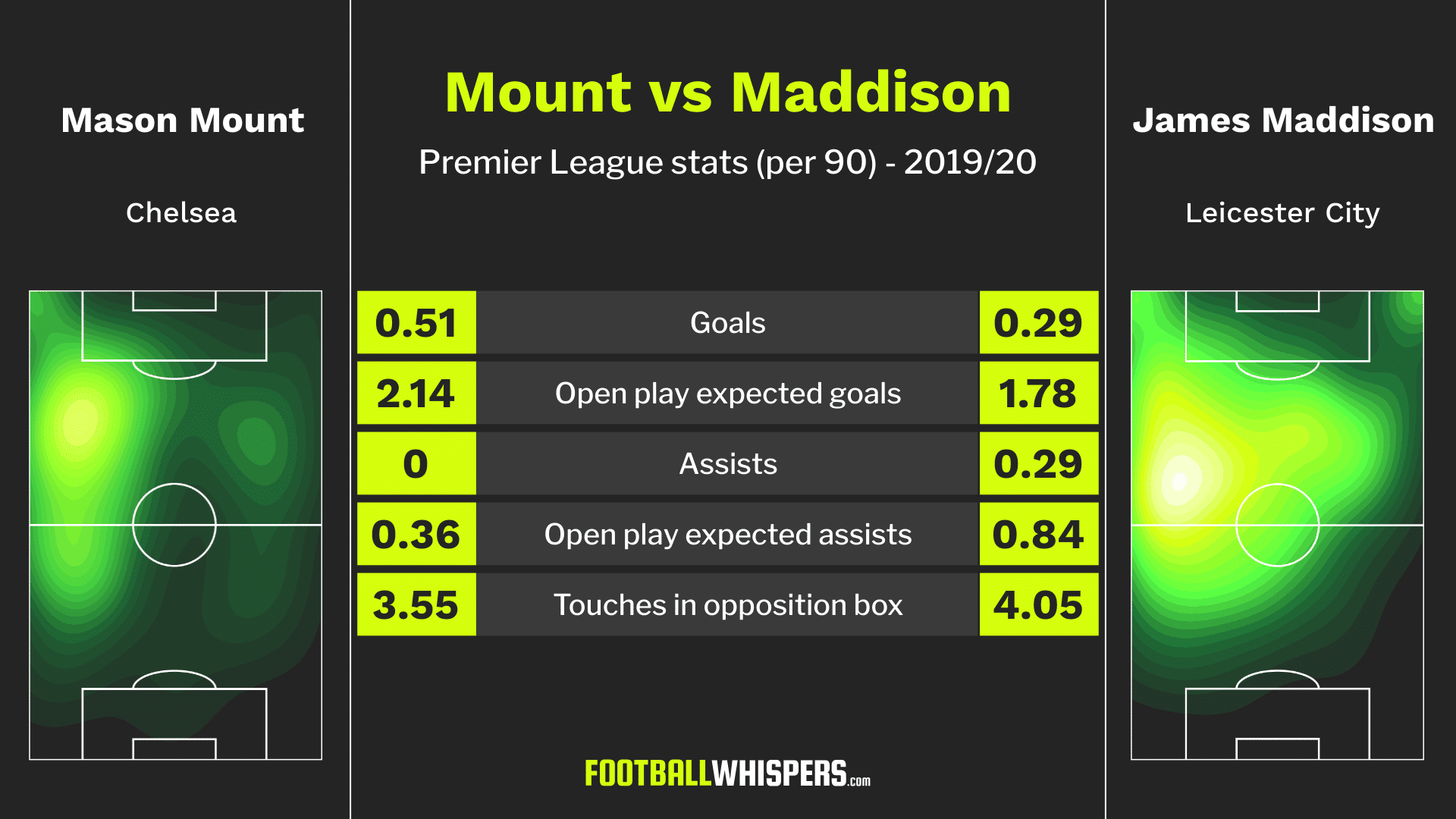 It's clear this season that Mount and Maddison have been used in similar roles, at least from their outset of matches. Both have tended to be deployed on the left but with the licence to drift infield and affect games.

What they do when in the middle of the pitch, however, is very different. Maddison, as highlighted in the graphic above, is more of a creator. He wants the ball to feet and will attempt to fashion chances for team-mates. He is also partial to a shot from distance, as the shot map below indicates. 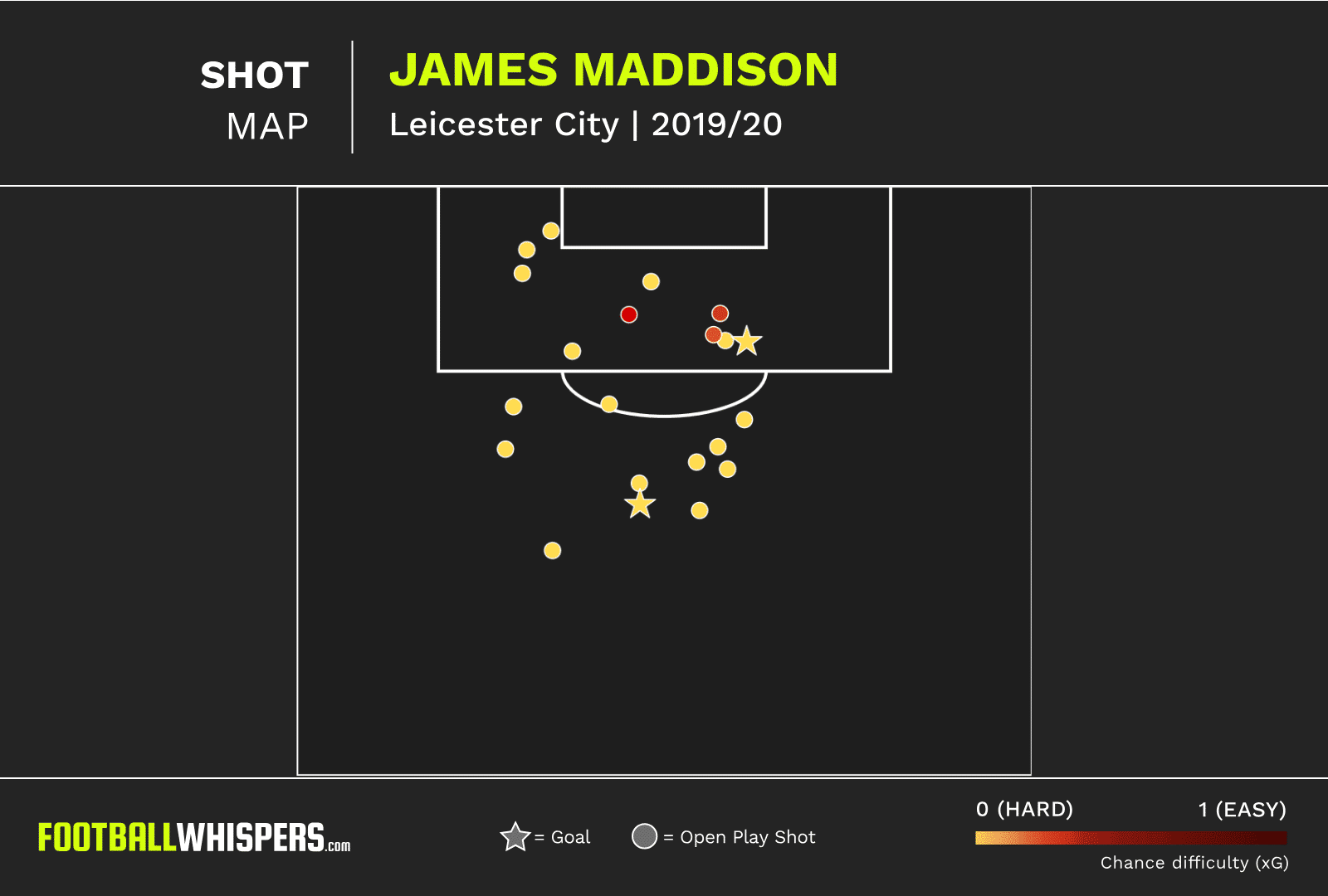 Mount's game is very different. In many ways he is a Raumdeuter, a German term often used to define the game of Thomas Müller. Roughly translated it means ‘space interpreter' and that is one of the 20-year-old Chelsea star's big strengths.

He is constantly able to find space, either by dropping deep, holding his position of breaking behind defences. In the attacking third, his ability to find space often enables Mount to fashion a shot at goal from within the penalty area. It's why he has been so prolific in the opening weeks of the campaign. 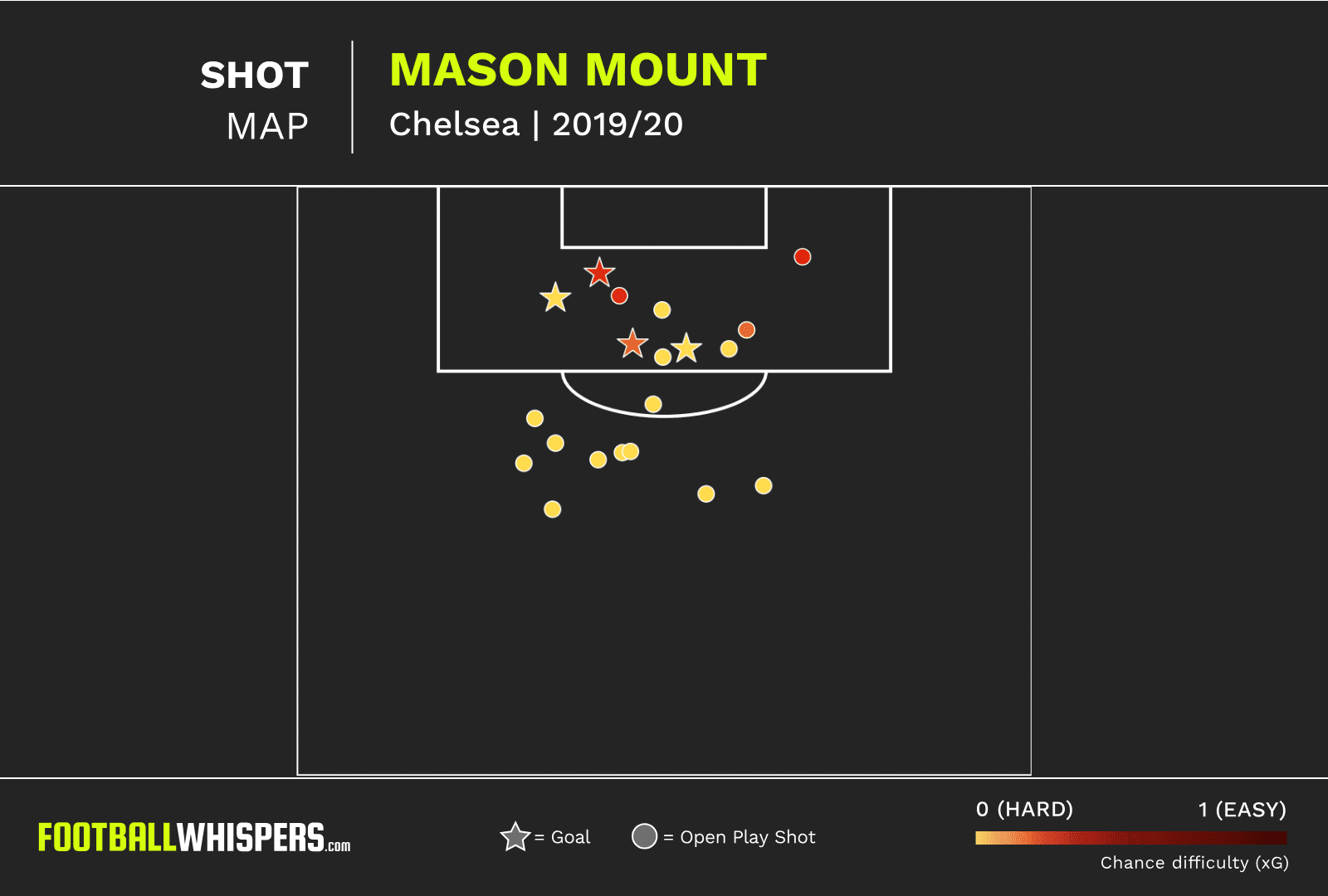 Mount also thrives without the ball. He is a highly-effective presser and wins possession back in the attacking third 1.14 times per 90 in the Premier League, a figure well in excess of Maddison's 0.72.

And that work-rate without the ball is perhaps why Mount has been handed two caps this season by Southgate – who wants his side to press opponents high up the pitch – while Maddison has yet to make his senior England bow.

There may be scope in the future to play Maddison as a No.10 and Mount on the left, but it would require a departure from the 4-3-3 shape Southgate has used since the 2018 World Cup and one of Raheem Sterling or Jadon Sancho to come out of the attack. It's an unlikely scenario.

As is the two being used as No.8s for England. Mount often performed well in that role for Derby last term but has only dropped back into a midfield three once this season. Maddison, meanwhile, does his best work in the attacking area of the pitch and would be burdened with a defensive responsibility he is not suited for.

Over the years, their respective games will evolve and there may come a point where Mount and Maddison complement each other perfectly. But that time isn't now and that means we're set for another longstanding and unanswerable debate.

So, who are you picking?