When he joined Chelsea's academy at the age of six, Mason Mount will have dreamt about his first senior appearance at Stamford Bridge. On Wednesday night that dream became a reality, although the details were somewhat different.

And yet that is what happened. Chelsea may have dispatched Derby County, which certainly wasn't easy, in the League Cup but the real takeaway from the game was how Mount performed.

“It was quite surreal,” he admitted. “I was probably a bit more nervous than usual going onto the pitch. I don't usually get nervous.

“I wasn't nervous at [Manchester] United but going to Chelsea and knowing so many people at the club … but it was an unbelievable game and a special, special moment.”

Mount and fellow Chelsea loanee Fikayo Tomori were given dispensation by the Blues to play in the fixture. And why not? It was the perfect opportunity to impress their parent club.

Both did to varying degrees. Tomori was unfortunate to score a freak own goal but displayed mental resolve to recover from the mistake and produce a solid display.

Mount, however, is a standout prospect. Chelsea have a fair few – Callum Hudson-Odoi and Ethan Ampadu, for example – but the midfielder is playing week in, week out for Derby in Championship, one of the most physically demanding leagues in the world.

Yet the 19-year-old will have known the League Cup game was his chance to impress Maurizio Sarri. It wasn't so much an audition as Mount's talent is not in doubt, it was more the understudy going up against the full cast.

So how did he fare? We have analysed his performance and assessed if he is ready to take up a starring role at Stamford Bridge.

In truth, this is an area of Mount's game that isn't in question. He is two-footed, blessed with excellent technique and has the vision required to unlock stubborn defences.

He also always looks to advance play and that was the case in the early stages of the clash at Stamford Bridge. However, perhaps due to his nerves, he overhit one simple pass and then attempted to slide a difficult through-ball to Tom Lawrence which ran on to Willy Caballero.

With 28 minutes on the clock, though, he displayed his first moment of quality. And it was decisive.

Derby built up an attack down the right flank and Mount knocked a pass to left-back Scott Malone. He tried to cut infield but Ruben Loftus-Cheek got a toe to the ball. 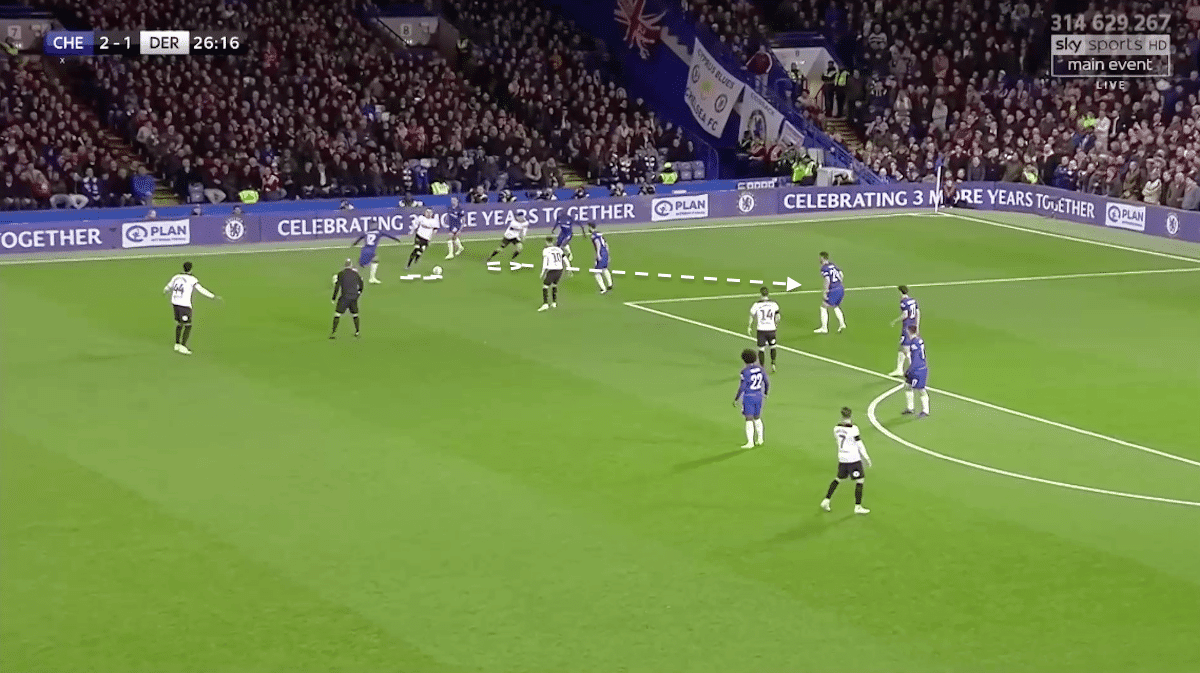 However, it ended up as an inadvertent pass to Mount who had advanced into the penalty area. The teenager had a split second to look up and spot Martyn Waghorn, who had escaped the attention of Emerson. 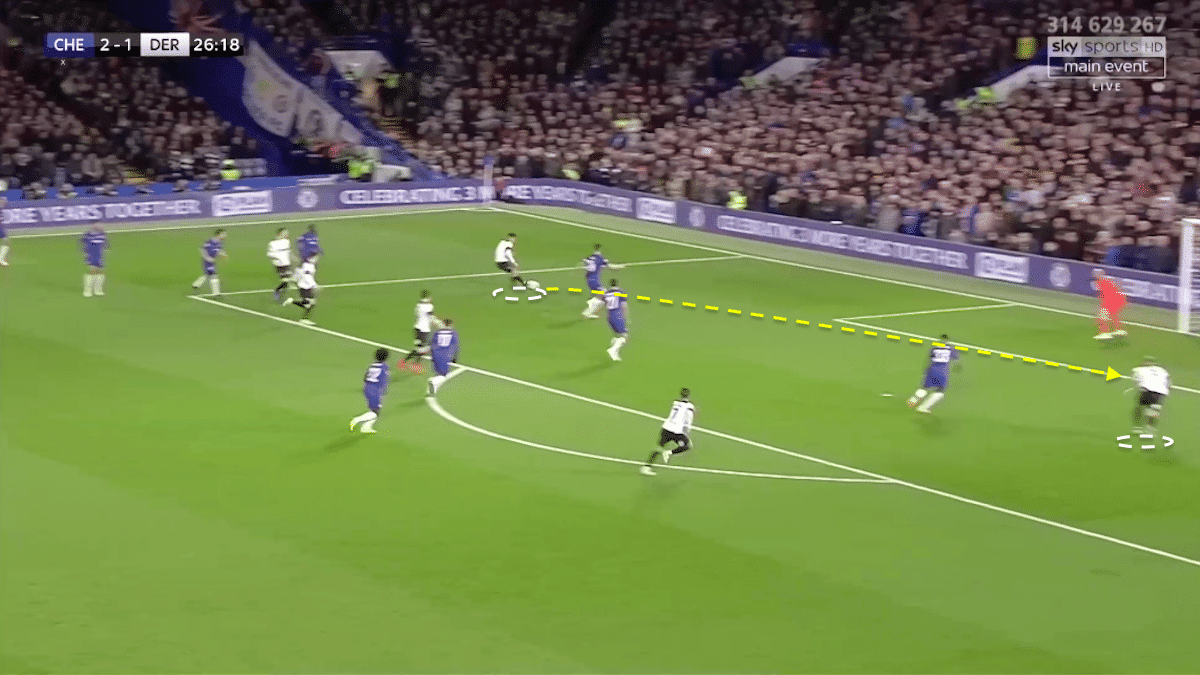 The pass was certainly not an easy one, especially on what is perceived to be Mount's ‘weaker' foot. But he wrapped his boot around the ball, slid it across the six-yard box at pace and left the forward with a simple finish. 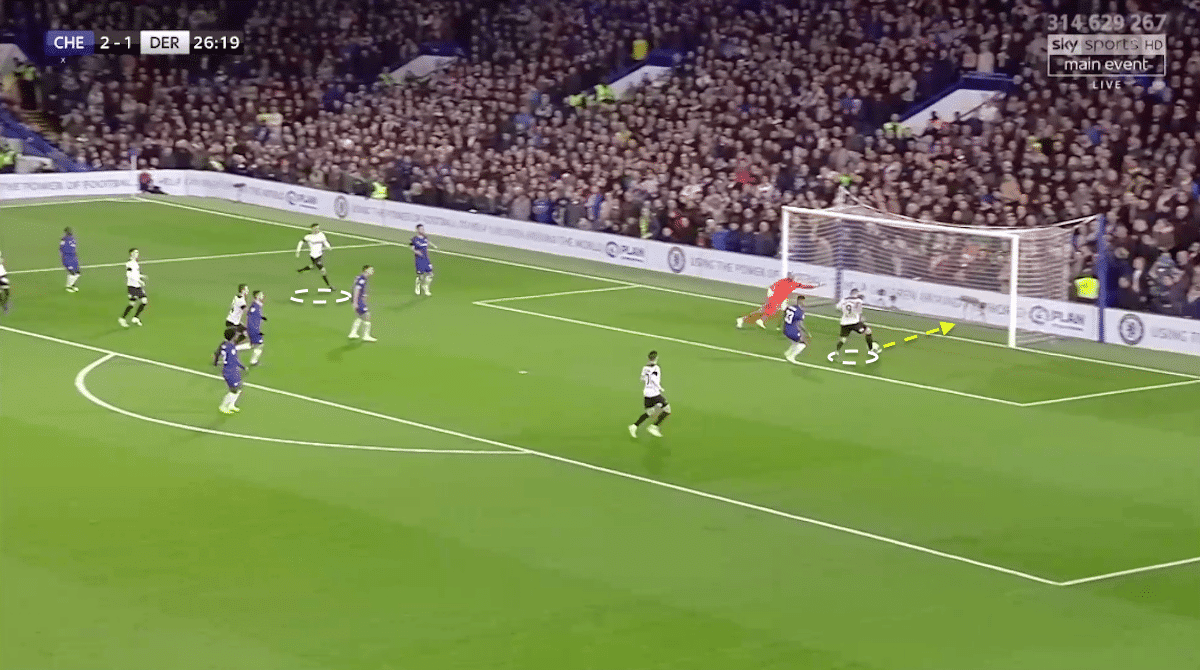 Mount settled into the contest after creating Derby's second equaliser of the night. And he displayed his increasing confidence two minutes later.

Tomori, under pressure from Loftus-Cheek, clipped a hopeful pass towards the midfielder, who was called up to the last England squad by Gareth Southgate.

The ball came at Mount waist high and Davide Zappacosta was applying pressure. But, as shown below, he displayed great composure to cushion a pass with the outside of his boot to Lawrence and Derby were at the Blues defence. 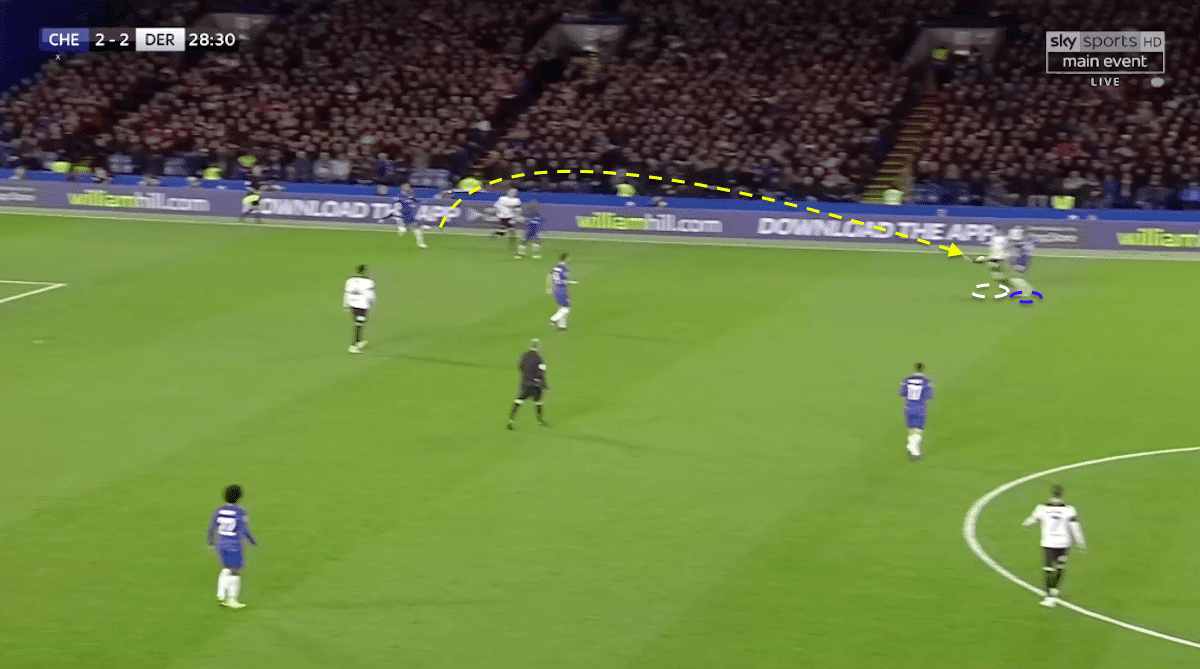 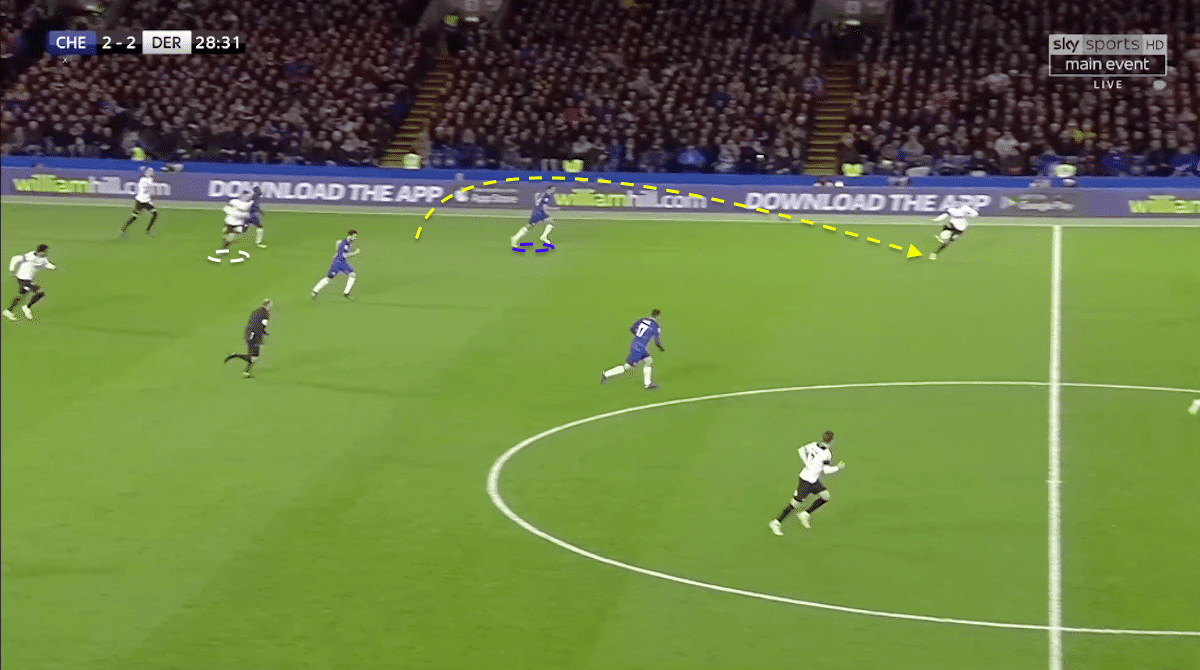 Chelsea dominated possession in the match – the Blues had 70 per cent of the ball – so Mount's opportunities were limited.

He only attempted 19 passes across the 90 minutes and his passing accuracy was the lowest of any Derby outfield player – 61.9 per cent.

To criticise Mount for that low figure would be harsh, however. He could've spent the 90 minutes playing things safe, ensuring his numbers at the end of the contest looked impressive. Instead, he took risks. He wanted to create and tellingly 11 of his 19 passes were forward.

They are qualities Sarri would have appreciated even if the execution wasn't always spot on.

This was perhaps the area Mount would have been judged stringently by the Chelsea staff and, especially, Sarri. The Italian wants his team to dominate possession and recover it quickly when the ball is lost.

Fortunately, it is an ethos Frank Lampard has subscribed to in his early management career. So Mount was given the platform to impress when Derby didn't have the ball.

His work rate shone through. He pressed diligently and intensely, even in the latter stages of the game, and was quick to close down the Blues midfielders. As shown below.

Mateo Kovačić – a player Mount would be in direct competition with at Stamford Bridge if he returned next season and the Croatian joined permanently from Real Madrid – brings the ball down in midfield with ease. 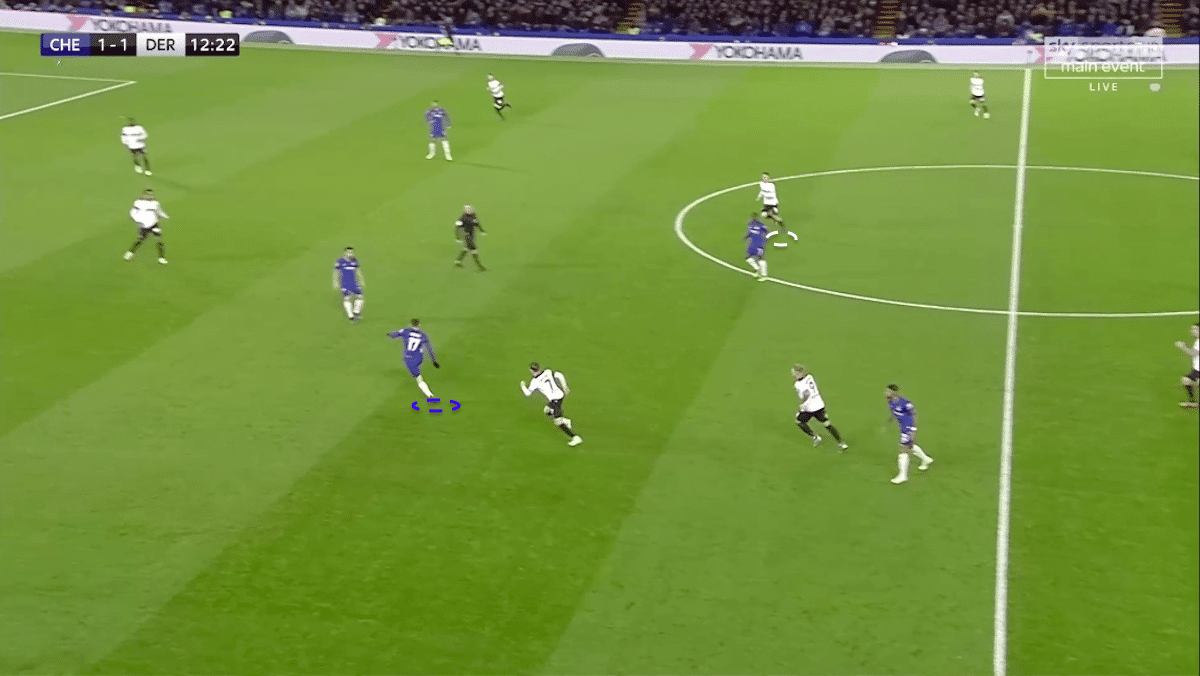 Mount is around 15 yards away from the Chelsea No.17 but quickly covers the ground to close down the midfielder and intercept the ball. 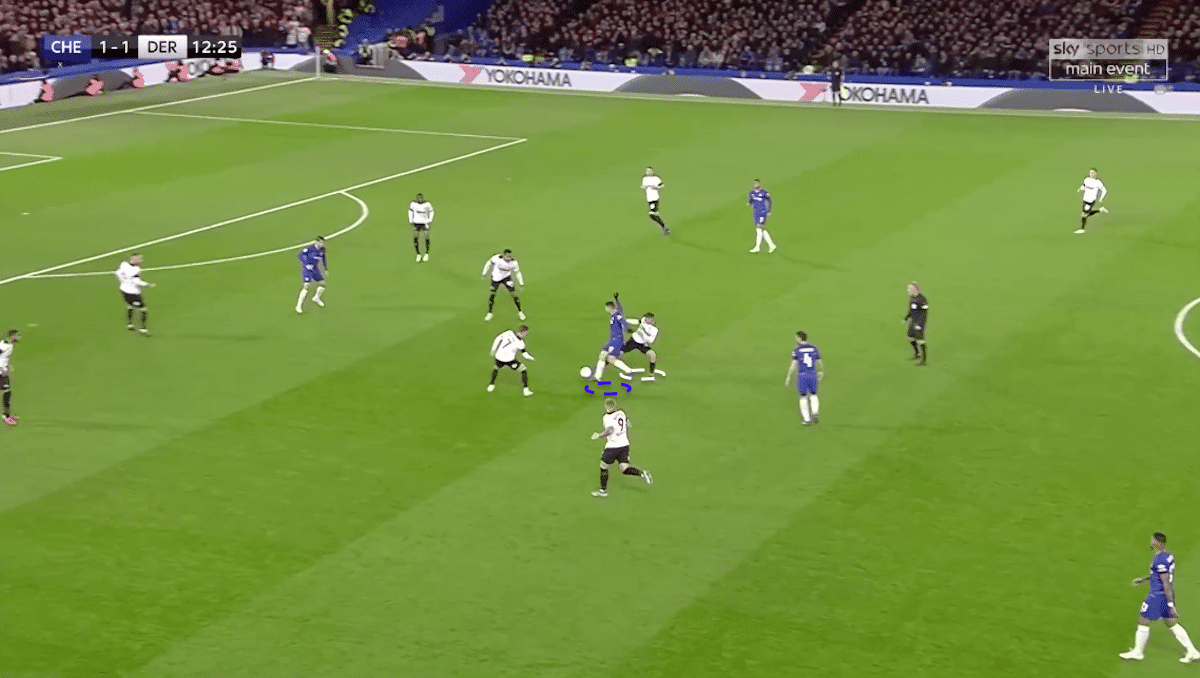 Wilson collects but his pass is poor and Cesc Fàbregas gathers possession. Mount, though, continues to apply pressure on the ball and dispossess the Spaniard.

In the space of five seconds, the Derby No.8 has broken up two Chelsea attacks. 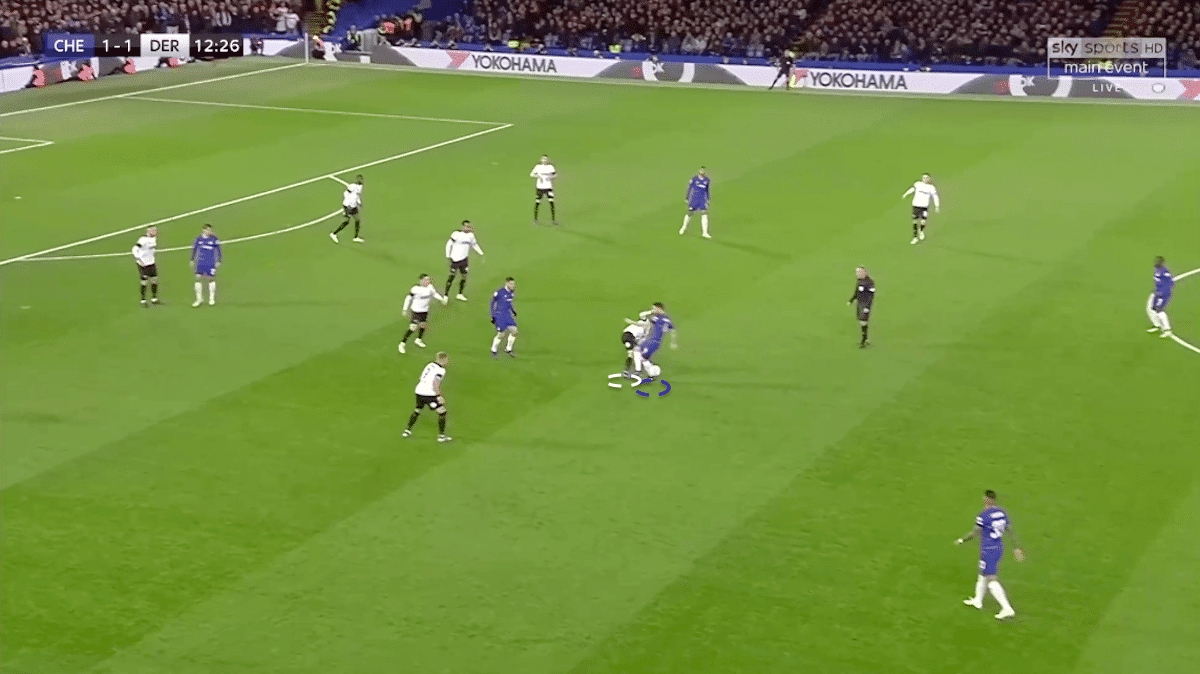 Mount finished the game having attempted five tackles, one interception and two ball recoveries, one of which was in the Chelsea half. For context, those figures were better than central midfield team-mates Wilson and Tom Huddlestone.

Mount is not the finished article. He will only get better as the season progresses and he is given more game time. Yet he proved at Stamford Bridge that he can hang with the big boys and make an impression.

Don't just take our word for it. Gianfranco Zola, one of the greatest Chelsea players of all-time and now Sarri's assistant, said: “Mason Mount played excellently.”

Frank Lampard, Derby manager and another Blues legend, added: “This wasn't a game for Mason to run as he has been this season because he's against Chelsea, against (N'Golo) Kanté, Kovačić and Fàbregas, three world-class players.

“But he was asked questions. ‘Do you want to work?' ‘How hard can you work in this game?' ‘And can you try to produce moments?' He did, he made the second goal and it was a fantastic pass. I love his attitude, I love that about Mason.”