Now more than ever, full-backs are expected to provide creativity as well as defensive solidity.

While the idea of a full-back popping up in advanced areas is hardly a new concept, their prominence in a team's attacking philosophy has been thrillingly demonstrated by the two most recent Premier League champions.

Guardiola appreciates the benefits of having two great full-backs as much as any manager. He's been fortunate enough to work with some of the finest in the modern game, including Philipp Lahm and David Alaba at Bayern Munich and Dani Alves and Éric Abidal at Barcelona.

After his first season at City, Guardiola prioritised the recruitment of quality full-backs proficient in both defending and attacking, thus explaining why the club paid £130million to bring Walker, Benjamin Mendy and Danilo to the Etihad Stadium.

It's worked wonders. Although Mendy has been injured for much of the season, Walker has been outstanding, while Guardiola offered a snapshot of his coaching prowess by transforming Delph into a left-back.

However, several Premier League clubs beyond City possess enterprising, creative full-backs and we've delved into the stats to reveal the most productive players in the position.

The metric we've used is highest expected goals assisted per 90, which measures the xG of a shot-creating pass. In other words, the quality of chances a player has created (their location, angle from goal, and context in the match).

Initially signed by Jürgen Klopp as an understudy to Alberto Moreno, Robertson has usurped the Spaniard to become the club's first-choice left-back this season.

And it's easy to see why. The Scotland international boasts the highest expected goals assisted average of any full-back in the league of 0.19 per 90 minutes.

Robertson has four assists to his name but has created a high volume of quality chances for his Reds team-mates, underlining what a valuable addition he has been to the squad.

The 24-year-old has shown real creativity at times this season, like his first-time ball for Mohamed Salah's winner against Crystal Palace, or his inch-perfect cross for the Egyptian in the 5-0 win over Watford.

Robertson has created more big chances than any other full-back per 90 minutes, too, with 0.35, and averages 0.8 open-play key passes per game.

At just £8million, Robertson is a decent shout for bargain of the season.

Although it took £50million to prise the England international away from Tottenham Hotspur's clutches, it's been money well spent.

After an excellent debut season with City, Walker was deservedly named in the PFA Team of the Year.

Not only does the 27-year-old possess the pace, power and positional awareness to make him a solid defender, he is devastating going forward.

The sight of Walker screaming up the wing has been a regular feature of City's play this season and it's paid dividends. Walker has six assists in the league and an expected goals assisted of 0.17 per 90, a clear illustration of how well he has gelled with the likes of Leroy Sané and Raheem Sterling. 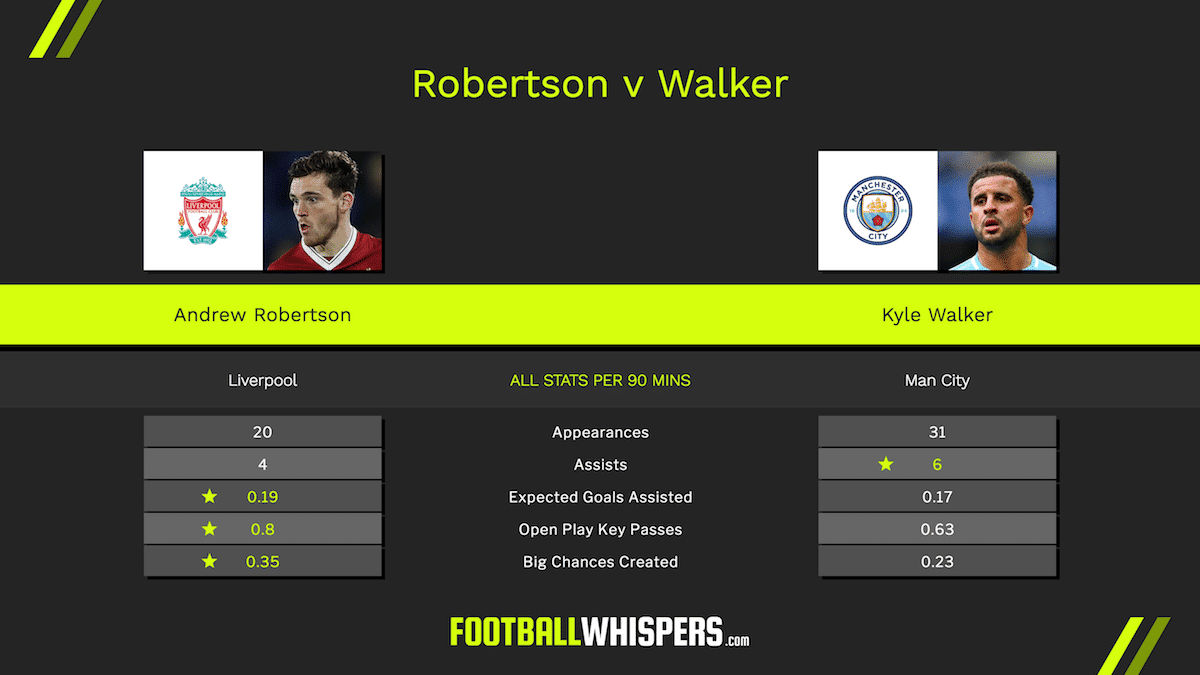 Perhaps a surprise inclusion, the unpredictable Ivorian's expected goals assisted per 90 stands at an impressive 0.18, while he has also created 0.31 big chances per 90 minutes.

Aurier's defending has been criticised at times but his creativity at least partially explains why Spurs were interested in him in the first place.

The former Paris Saint-Germain man has much to learn when it comes to the fine art of defending, but his ability to bomb down the wing and deliver quality crosses means he has the foundation from which to improve and eventually become Mauricio Pochettino's preferred option at right-back, which is currently Kieran Trippier.

The burly Bosnian's Arsenal career started so promisingly, with two goals and two assists in his first six games after arriving on a free following his departure from Schalke.

But then the injuries took over. Kolašinac has a lot of what is required to become a regular fixture in Arsenal's starting line-up, but he seems to be extremely injury-prone which, at 24, is a worrying sign.

When he has played, he's been creative, with an expected goals assisted of 0.17 per 90 minutes. He has also created an average of 0.28 big chances per 90, registering four assists in total.

Kolašinac has been unfortunate this season, spending much of it injured or on the bench, with Arsène Wenger understandably preferring Nacho Monreal. However, if he manages to stay fit, there is certainly a place for Kolašinac in the post-Wenger era.

Again, perhaps not a player you would expect to feature but the Congolese left-back has shown flashes of real quality in his second season with the Hammers.

While he hasn't always been reliable defensively, the 24-year-old has offered pace and menace on the left wing, demonstrated by his assists for Cheikhou Kouyaté against Spurs and Diafra Sakho's last-minute winner against Swansea City, both of which arrived after a combination of a surging run and pinpoint delivery.

Overall, Masuaku has an expected goals assisted of 0.16 per 90 minutes and is also first in successful take-ons, averaging 3.92 per 90. It's clear where Masuaku's strengths lie and, should West Ham stay up, the club's supporters will be hoping that the flying wide man can provide on a more consistent basis next season.

The 32-year-old has found a new lease of life at left-back under José Mourinho, an excellent campaign thrusting him back into the England picture ahead of the World Cup.

Young, traditionally a midfielder, has played most of his games at left-back this season and has often shown why he's been preferred to Luke Shaw, with two goals and four assists to his name.

The former Aston Villa winger has an expected goals assisted average of 0.15 per 90 and he offers higher quality in his crossing compared to Shaw, as proven once again with his ball for Marouane Fellaini's winner against Arsenal.

Young's ability to weave past a defender and drop a cross straight onto a team-mate's head has been a surprisingly valuable tool in United's armoury and it's something that Gareth Southgate will certainly take into account when finalising his England World Cup squad.

An able successor to Walker on the right side of Spurs' back-line, Trippier has continued to offer regular reminders that he is one of this league's finest crossers.

With four assists to his name (seven in all competitions), the 27-year-old has been Pochettino's preferred option at right-back to Aurier, a steadier influence at the back who can still provide a sense of cutting edge going forward.

Trippier's expected goals assisted is 0.15, while he is fifth in big chances created with 0.27. In addition, he tops the charts for open-play key passes with 1.3 per 90 minutes, underlining his ability to carve open defences.

With Nathaniel Clyne injured long-term, the pressure on Alexander-Arnold's shoulders became greater. However, the teenager has admirably stepped up to the plate and has shone for Klopp, already maturing into a wonderful right-back.

The 19-year-old has an expected goals assisted average of 0.16 per 90 and has created 0.25 big chances per 90 too. Alexander-Arnold has also completed 1.09 open play key passes per 90, placing him fourth in that category.

Unsurprisingly, given his pace and control, he also features highly in the successful take-ons charts, with 1.22 per 90 enough to make the top five.

With plenty of time on his side to learn and sharpen his creative skill-set, Alexander-Arnold has the natural ability and temperament to become one of the Premier League's most effective creative full-backs in the years to come.