No Premier League manager has been as reliable when it comes to selection and formation than Wolves’ Nuno Espírito Santo; in 12 matches, he has changed his starting XI just twice and, unsurprisingly, nine of his squad have played 950 or more minutes this season.

The Portuguese’s tried-and-trusted 3-4-3 has proven both strength and weakness, as Wolves are as much a collective force as any team in England’s top-flight, with the players possessing an inert understanding of the system and approach demanded by their manager.

But if you’re playing the same way, with the same players every single week, it can become a little predictable. It also continually reveals your team’s flaws if the individuals rarely change; and Wolves’ is undoubtedly a lack of punch in the final third.

After they very nearly came back to stun Tottenham at Molineux earlier this month, Nuno defended his approach, “we have a style, a system … we will not change” but one individual who could gradually force his manager into softening his principles is teenage midfielder Morgan Gibbs-White.

For it was in that game against Spurs where the 18-year-old delivered the sort of eye-catching cameo that makes anyone stand up and take notice, let alone his own boss. Eight days later, it was more of the same as he came off the bench to strike the woodwork in the 1-1 draw against Arsenal.

And sooner or later, should these small samples of excellence continue, he will compel Nuno into loosening the shackles and letting him free from the start.

Having been with Wolves since the age of eight, his talent has been an open secret in the Black Country for years now, highlighted by the fact he’s been capped at England Under-16, 17 and 18 level, and was one of his country’s star performers in their triumph at the Under-17 World Cup.

There is good reason the club were keen for him to sign a new deal in January, just after he celebrated his 18th birthday, keeping him under contract until 2022. Because all the early signs indicate, that he’s just the latest in this generation of technically outstanding, athletic and exciting young Englishmen.

His display in the 29 minutes he was on the field against Tottenham was notable for two reasons: firstly, the ease at which he adapted to the contest seizing control of the midfield and showcasing some wonderful passing – one through-ball to Ivan Cavaleiro really merited a goal – but also in the fact he completely outplayed Spurs’ much-vaunted Harry Winks.

There was calmness and composure on the ball, enjoying 32 touches which extrapolated over 90 minutes would have been more than any other on the field. But the mere fact he was given that level of responsibility in possession, in a match Wolves were chasing at 3-0 down, speaks volumes.

He was limited to just five minutes at Emirates Stadium, with the game situation so delicate at 1-1, but unlike at Molineux where he replaced fellow midfielder João Moutinho, in north London he was brought on in place of Raúl Jiménez.

And his versatility is another huge part of his appeal as Gibbs-White can play deep as a go-to pass option and creative distributor or can play higher up the field in a more attacking and forceful playmaking role.

Which should help solve the conundrum as to where to fit him in. If Nuno, as he himself insist, remains wedded to the 3-4-3 that he brought him so much success, then Gibbs-White can play in the midfield two, for Moutinho or Rúben Neves, or outside of the central striker in a withdrawn forward’s role.

Or if Nuno was to get slightly experimental, he could keep his Portuguese duo for stability, as they are very much the heartbeat and identity of this XI and then give Gibbs-White a playmaking and line-breaking role behind a front two. 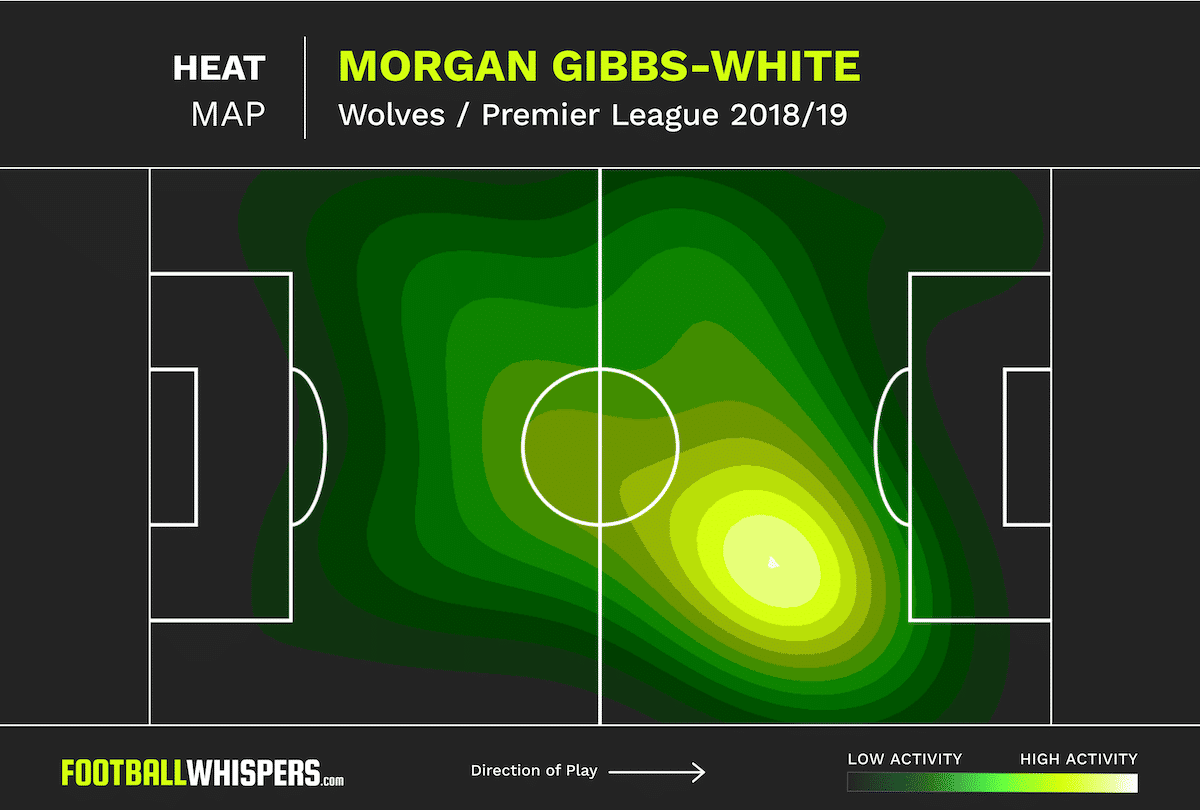 He has only played 64 minutes across six substitute appearances but has completed three take-ons, created two chances in open play, 10 of his 43 accurate passes have been forward and his passing accuracy is a healthy 84.3 per cent. He’s been impactful every time he’s on the field.

It’s a tiny sample size so shouldn’t be given too much credence, but then his per 90 averages are similar to his numbers during a similar set of sporadic appearances in the Championship last term: 4.21 take-ons, compared with 4.48 last term and 2.81 open play key passes against 2.24 in 2017/18. Maybe his potential performance levels are just that high…

Wolves are having an impressive season in the Premier League and look set to compete for a top-10 finish, which would be a sizeable achievement, but there is a sense in watching them that there is an extra 10-15 per cent they can give that can elevate them another level. Gibbs-White can be that 10 per cent.