For some men turning 30 can be met with a sense of fear and trepidation. Their roaring 20s are over and concerns can set in that age is slowly creeping up on them.

For Lionel Messi, turning 30 has brought with it his own problems. He may not be having a midlife crisis, but for the first time in his glittering career questions are beginning to be raised about whether he is on the decline.

It seems such a ludicrous accusation to make when you assess the Barcelona forward’s wealth of achievements.

So far, he has eight La Liga titles, five Copa del Reys and four Champions League crowns to his name. Individually, he has also claimed the Ballon d'Or a staggering five times.

And yet, despite all that, there are those that say he is on the decline.

The murmurs started at the beginning of last season, but they intensified as Barcelona were dumped out of the Champions League by Juventus in April.

For so long Messi has been the star of Europe’s premier club competition, but this time he was overshadowed by fellow Argentine Paulo Dybala. The 23-year-old scored twice in the first leg to secure what would turn out to be an unassailable 3-0 aggregate lead.

Suddenly it felt as though, for the first time in years, Messi’s star was on its way down and after turning 30 this June those claims will only intensify.

However, for one former Barcelona player such accusations don’t ring true. Ronald de Boer knows just what it is like to turn 30 at the Spanish club, having done so himself back in 2000.

The Dutchman subsequently left the Camp Nou to join Scottish side Rangers, but when the now 47-year-old assesses Messi’s career going forward he cannot see the forward’s level dropping.

“If I look to myself, not comparing myself with him, but when you are 30 you still think you are young if you are away from injuries,” says De Boer.

“Talking about his level – he is the best player I have ever seen play the game. What he has already achieved is amazing and I hope he can show those skills for many, many years and entertain people again.

“I think he doesn’t have major injuries. So if he keeps himself fit and focused, for at least three or four years he can play on the same level.” 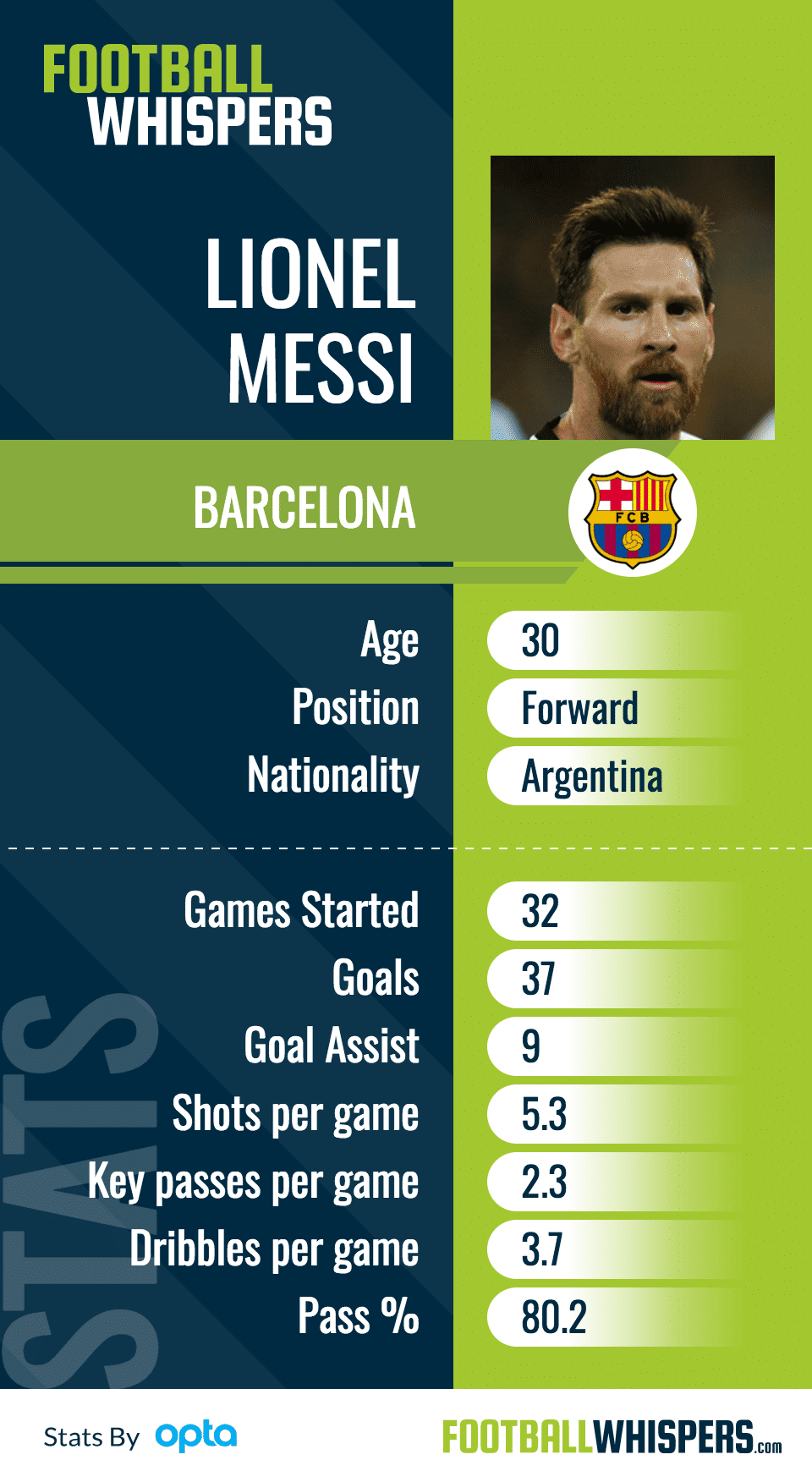 De Boer’s faith in Messi is justified given the sudden splurge of players enjoying some of the best days of their playing career in their 30s.

Zlatan Ibrahimović is undoubtedly the prime example with the striker scoring 250 goals since turning 30 – compared to the 232 he managed in the years before.

Andrea Pirlo is another who has matured like a fine wine and he was named the Serie A Player of the Year three times in a row between the ages of 32 and 35. Before that the midfielder had never won the award.

Crucially advancements in conditioning and physiotherapy have allowed players to extend their careers. It is why Francesco Totti was able to play on until he was 40 and why Ibrahimović’s career will not be over – despite suffering a serious knee injury in April that a decade ago could have forced him to retire.

Such late bloomers are what fill De Boer with confidence when he claims Messi is not on the decline.

Of course, players can have ups and downs when it comes to form, but to say the Argentina international has passed his best would be wrong in the Dutchman’s eyes.

“I think he is still eager enough. Of course every year it is more difficult when you win so much and you win every personal prize,” says De Boer.

“To keep that for such a long period [is difficult], it has already been many years on the top and that for me is unbelievable. I already have so much respect for that. But he seems like he can still do it.

“You can’t expect he has 50 years in a row on the same level; he will also have his ups and downs. Maybe next year he will surprise us again.”

Time will tell whether Messi can maintain his place at the top of the world’s game. But, given Barcelona have just rewarded him with a new contract until 2021, they clearly feel there is more to come.