The Premier League has never proved fertile ground for Spanish strikers. Álvaro Negredo, Roberto Soldado, Borja Bastón, Albert Luque, Diego Tristan, Rodrigo, Javi Moreno… Xisco; the list of distinguished or promising La Liga frontmen who made the trip to England only to spectacularly fail is as long and wide as Iago Aspas’ infamous corner at Anfield in 2014.

Of their ilk, it’s only really Fernandos Diego Costa who can be considered success stories – and even they carry a rather sizeable asterisk surrounding the latter years of their time in England.

Álvaro Morata was supposed to be different and, for a while, it looked he would break the mould.

After Romelu Lukaku, Morata quickly put to bed concerns over his physicality and whether he had the personality to make it in the Premier League with ten goals and four assists in the 18 league games he played in 2017.

But then as Chelsea’s fortunes nosedived, so did his form and confidence. He has found the back of the net just once in 2018, with the overriding concern that all those pre-season fears about his suitability to play in England are beginning to materialise.

Morata retains popularity among Chelsea fans who see the effort he puts in each week and know there is a deeply-talented player just waiting to burst out. But their patience can only last so long.

Reports in Italy have emerged suggesting Morata is on a shortlist of striker targets drawn up by Juventus. If a deal were to happen Chelsea could expect to receive a sizeable proportion of their investment.

Chelsea’s spending has not been at the level of the Manchester clubs. But, after a season in which they’ve fallen well short domestically and in Europe, Roman Abramovich will demand a reaction. Whether or not that includes coach Antonio Conte remains to be seen.

The same could be said for Morata who along with indicating £100m will need to be raised to fund a significant summer spend. 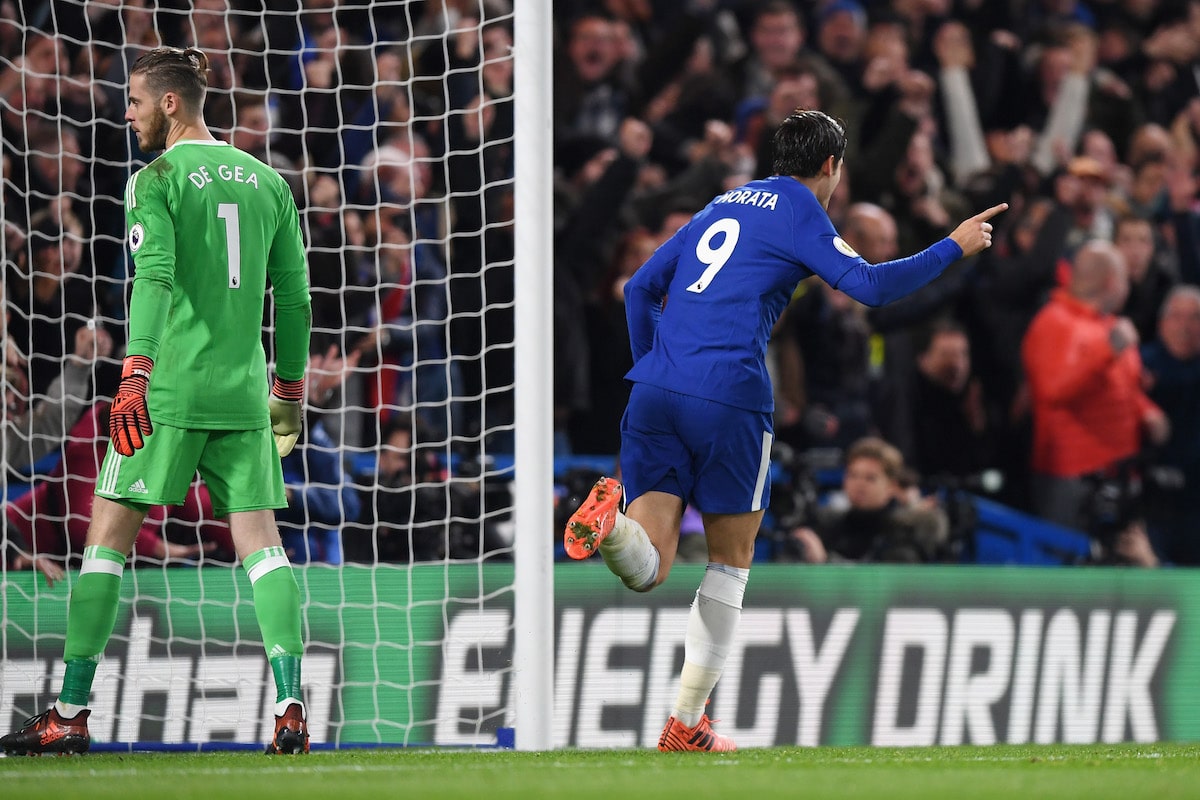 So, should Chelsea cut their losses and off-load Morata to free up space in the transfer budget and squad, for a new striker – possibly Anthony Martial – or does the Spaniard deserve more time?

In analysing his Premier League record, one goal every 178.4 minutes is a good return. The Messi-Ronaldo era has raised goalscoring expectations through the roof but that’s just below one every two matches and is in a similar range as his two seasons in Serie A at Juventus – 165.1 and 208 – but below the 88.9 he managed for Madrid in La Liga last term.

That number is inflated by the role he played for Los Blancos, however. Often used as a super-sub, Morata would emerge when the game was stretched and, as is often the case in Madrid’s matches, the opposition were already well beaten.

But if you take an overall average of his four campaigns as a regular member of the first XI – and it should be noted he’d never started more than 16 league games in a season before now – it’s 160.1, so he’s only marginally below-par at Chelsea.

Where he has fallen down is in the Champions League with just one goal in 383 minutes, compared with one every 55.6 minutes for Madrid and 267 and 148.8 in Juventus colours.

These figures do not provide context, though, and just as Morata’s Madrid numbers are boosted by the role he played; his Chelsea ones are swollen by his early season form.

Since January 1, he’s played 621 minutes for last season's champions scoring just one goal and supplying two assists. That isn’t good enough of any striker, let alone an elite one.

But then a season remains the collective historical grouping for statistics – the good and the bad – and should not be taken as a complete body of work. It just so happens Morata’s form for Chelsea has gone against the grain. Whereas most strikers get better, he’s become worse.

As a result, analysing his first nine months in Premier League football reveals a mixture of troubling and encouraging numbers.

Starting with the good, he’s ranked seventh among Premier League strikers for total scoring attempts per 90 minutes (3.48), 14th for touches in the opposition box (6.73) and across expected goals metrics, his xG per 90 of 0.56 ranks him eighth and his overall xG contribution (xG + xA) of 0.7 puts him ninth among his fellow frontmen. His shooting accuracy of 42.1 per cent is also strong.

Should these numbers just be expected of a player who has started 23 games for the fifth-best team in the country? Perhaps, but that also indicates that overall, in the sense of him being a pure goalscorer and penalty-box presence, he’s been OK. 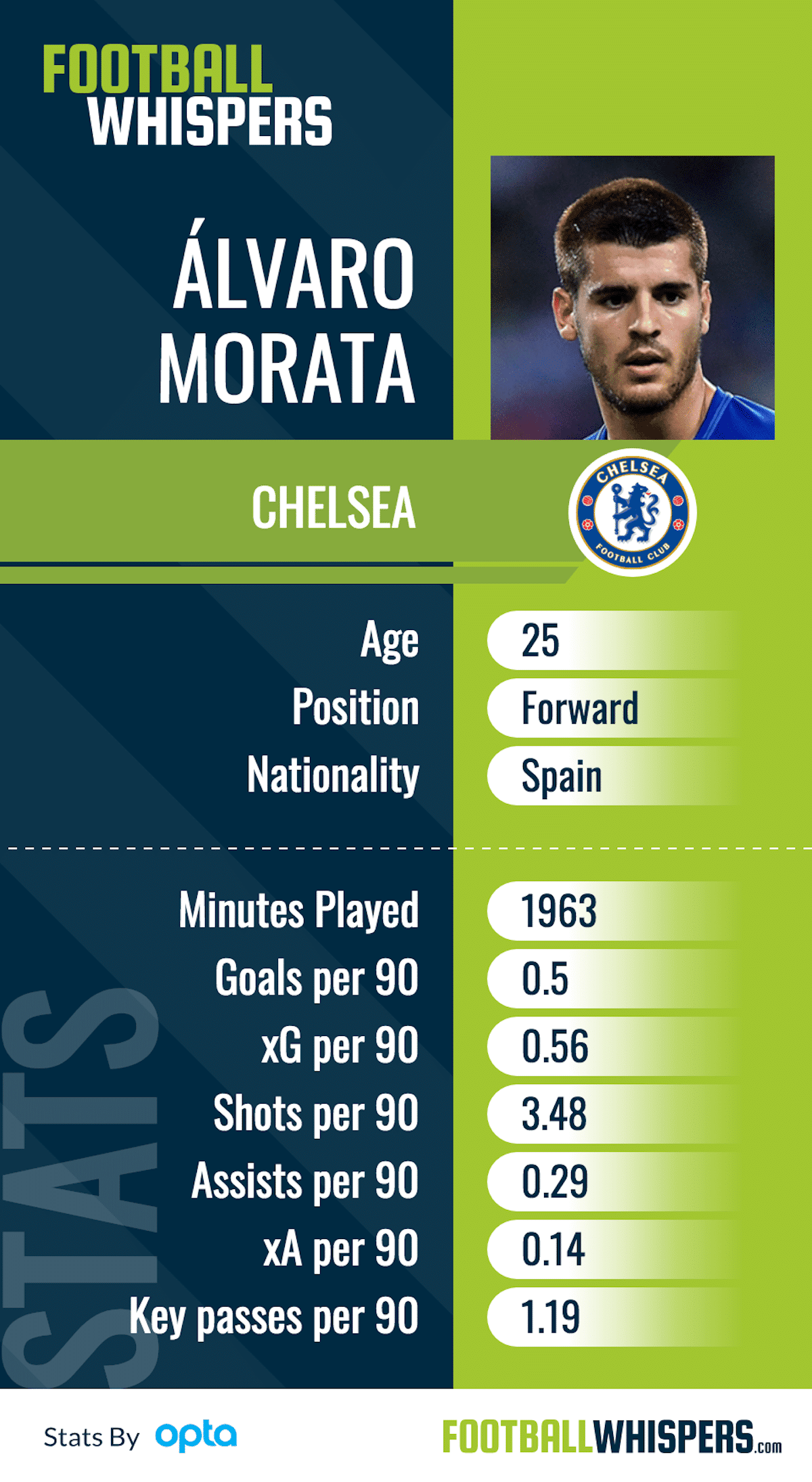 But outside of the above and his 2.33 aerial duels won (28th for strikers) is where it starts to get ugly.

Morata’s work on the ball has been sloppy, averaging just 18.56 accurate passes per 90 at 38.9 per cent and he’s totalling an ordinary 1.19 open play key passes per 90 (36th) which, given the quality of attacking players around him, really should be higher.

He’s also failing to attack defenders with any regularity. His 1.51 successful take-ons per 90 puts him outside the top 50. His xA per 90 is also just 0.14 (48th among strikers) which means for all the effort he may be exerting, it’s not actually benefitting his team-mates to any extent.

In a defensive sense, he’s averaging 0.64 tackles per 90 (97th) and 0.27 interceptions (98th). Which all adds up to the slightly stark reality that if he’s not scoring goals, what exactly is he offering?

Of last summer’s arrivals, Morata isn’t alone in under-performing for the Blues. Tiémoué Bakayoko has been even more disappointing, even with a playing style seemingly tailor-made for England. Danny Drinkwater hasn’t shone and while Antonio Rüdiger and Davide Zappacosta have been the best of the new signings, their form has fluctuated throughout.

Should all be ruled failures, or are there external factors of greater influence at play here?

Chelsea in 2017/18 cannot have been the easiest place to adapt to a new country and culture and a credible case can be made that Morata's alarming dip in form looks like a symptom of the Blues' internal problems, rather than a direct cause.

Assuming Conte leaves the club in the summer, which looks increasingly likely as the Champions League fades from view, a new coach may feel he could draw the best from the 25-year-old.

The Spaniard in an introverted type who feeds off confidence and when he’s hot, he’s very hot. The right coaching change could have a considerable effect on his well-being.

But if these numbers continue, sooner or later the conclusion will be drawn that for all the promise he’s shown, maybe Massimiliano Allegri and Zinedine Zidane were right after all and his best role is as part of a supporting cast rather than the leading man. Which may lead Chelsea to cut him altogether.