Manchester City haven’t signed anyone of note yet this summer. Sure, they’ve picked up 21-year-old central defender Philippe Sandler from PEC Zwolle but in terms of players that will feature in Pep Guardiola’s team next season we haven’t had a peep from the English champions.

There are two likely reasons for this. The first is that Guardiola’s squad was clearly and unequivocally the very best in the Premier League last season and, after spending a fortune since he’s arrived at the club, the Catalan coach is finally content with what he has at his disposal.

The second, and perhaps most likely reason, is that the famed perfectionist simply hasn’t settled on what he wants to bolster his squad.

Indeed, City’s inaction in the transfer market naturally adds a degree of importance to the first signing they make this summer. Which makes the most recent rumours of former City midfielder Aaron Mooy – now of Huddersfield Town – possibly returning to the club all the more interesting.

If Guardiola has identified the Australian international as a Manchester City transfer target that would suggest the coach’s main concern is the defensive side of his central midfield.

On paper that’s probably where the English champions should be looking to strengthen. Guardiola will always stand by reliable midfielder terrier Fernandinho. But if the Brazilian were to pick up a long-term injury there is no-one in the Citizens' current group who could offer the same protection he does.

İlkay Gündoğan deputised last season but the German international is more attack minded. And for a coach like Guardiola, who tends to fixate on every, single detail, that simply won’t do.

So how does Mooy compare to the City pair? For the past two seasons the 27-year-old has been an almost ever-present member of David Wagner’s midfield in a defensive role that was crucial to the club’s shock promotion to the Premier League and then again in ensuring the Terriers remained there for a second season.

Although Mooy is not the blockbuster name to excite City fans, his stats stand up against City’s central midfielders and suggest there may be a place in this team for the player deemed surplus to requirements when he was allowed to join Huddersfield for a club-record £10million last summer.

That doesn't tell the entire story of the Australian international's slightly odd career, however. Having come through Bolton Wanderers' academy he played for two years in Scotland with St Mirren before returning to home in 2012 to sign for Western Sydney Wanderers.

In May 2014 he joined Melbourne City who, in January of that year, had been purchased by the City Football Group. After two further years in the A-League he joined the Citizens on a three-year deal before being loaned to Huddersfield six days later.

It was never the expectation that he would develop so rapidly while with the Yorkshire club. But that is what he has done and, after bossing the Championship while on loan, last season Mooy shone as Town defied all expectations to secure a season season in the Premier League.

The 27-year-old was central to that and averaged 3.01 tackles per 90 minutes. Although playing in defensive midfield for Huddersfield is always going to result in the chance to make more tackles than performing the same role for Manchester City, it's telling that Fernandinho only completed 1.93 per 90 minutes, followed by Gündoğan on 1.6 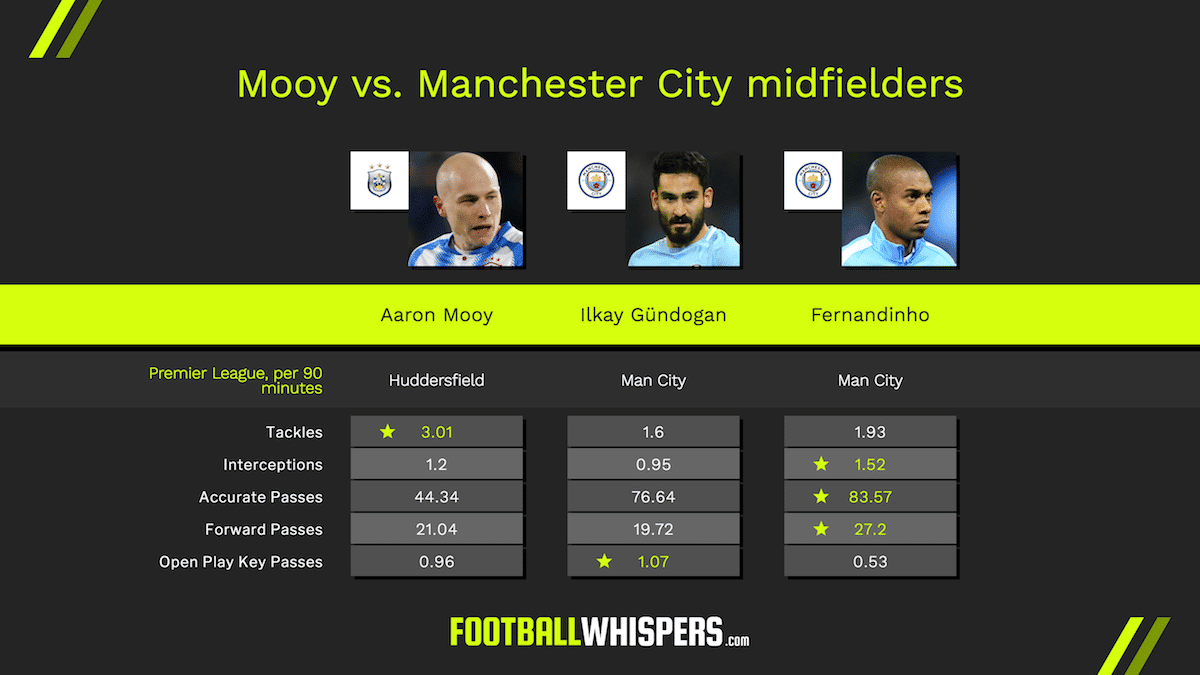 Intriguingly, Mooy is also second compared to Manchester City’s current defensive midfielders for interceptions per 90 minutes. While Fernandinho is top on 1.52, Mooy isn’t far behind him on 1.2. Gündoğan averaged just 0.95.

Indeed, as we can see from the the Player Persona radar below, exclusive to Football Whispers, Mooy's game was characterised by defending more than either City player last season. He matched Gündoğan for build-up passing and provided more crosses than either player – perhaps surprising given he operated from a central position. 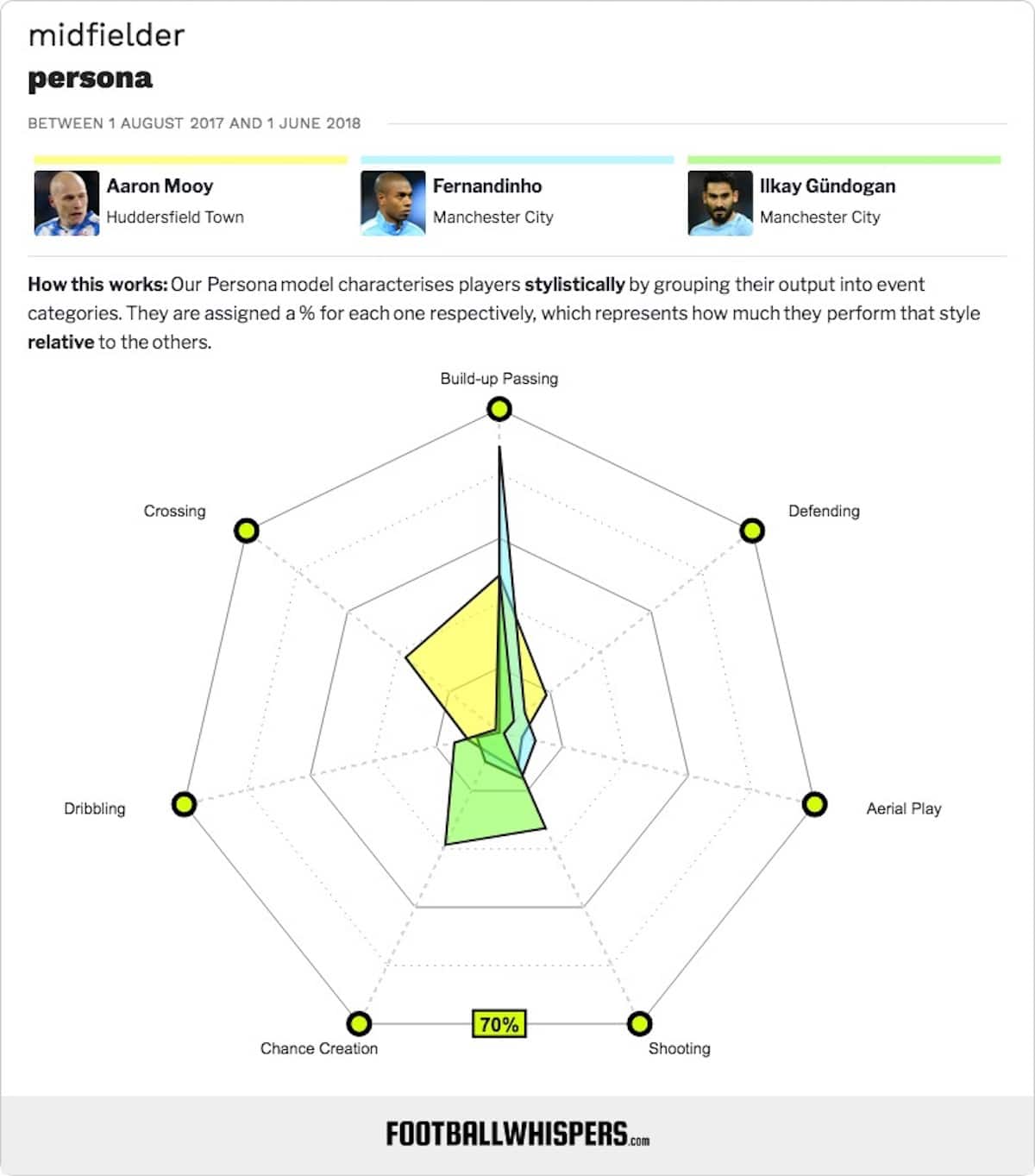 Although it isn’t a huge factor for a club of City's size and wealth, the fact they have a buy-back clause in the deal which took Mooy to Huddersfield makes him a potential bargain at just £20million.

Any other leading defensive midfielder in the Premier League, or a player of equal quality in Europe’s top divisions, would probably cost at least twice that.

There are better midfielders out there to sit in reserve for Fernandinho. But few, can marry up Mooy's Premier League experience, availability, defensive nous and precise use of the ball – something Guardiola values above all other traits.

The Australian international would be an ideal Premier League-proven midfielder in a squad looking to challenge in four competitions next season and could well be Guardiola’s first smart – if not particularly glamorous – signing of the summer.