Since then he has gone on to cement his place as the club's first-choice right-back, be named club captain and win a special place in the hearts of Brighton fans.

However, all good things must end and finding a worthy long-term successor for Bruno, who will turn 38 in October, was a priority for the club during the summer transfer window.

And, interesting, the Seagulls ended up signing another Spanish defender from Valencia.

Now, Chris Hughton hopes that Martín Montoya can take to life on England's south coast as comfortably as Bruno did back in 2012.

Montoya's deadline day capture from Los Che capped an impressive summer's business for Brighton, which included the club record £17million signing of Eredivisie top scorer Alireza Jahanbakhsh, the arrival of Yves Bissouma from Lille and the addition of a left-back in the shape of RB Leipzig's Bernardo.

And while the aforementioned trio all featured in the opening weekend defeat at Watford, Montoya's debut will come at home to Manchester United.

Here's what Brighton fans can expect from their new right-back.

Breaking through at Barça

First-team opportunities at the Camp Nou proved difficult, however, with Dani Alves ahead of him in the pecking order.

After 67 appearances for the Blaugrana, he joined Inter on loan in the summer of 2015. His experience at the San Siro proved fruitless, yielding just four appearances before returning to Spain with Real Betis.

There, he made 13 appearances, helping Los Verdiblancos avoid relegation from La Liga before being snapped up by Valencia. Montoya made a more significant impression at the Mestalla, managing just five fewer performances in two seasons than he did in five with Barça.

Montoya attracted interest from free-spending Fulham but ultimately signed for Brighton, whose mind had been made up by goalkeeper Mathew Ryan. The Australian stopper played alongside Montoya at Valencia during the first half of the 2016/17 season and convinced the Seagulls of the former Barça defender's credentials.

Montoya wasn't in the squad for the Watford game but will be handed a reasonably daunting Premier League debut against United after Bruno picked up an injury at Vicarage Road.

The 27-year-old full-back will be subject to a stern assessment of his abilities up against one of Juan Mata, Alexis Sánchez or Anthony Martial.

However, having played in El Clásicos for Barça, Montoya knows what's required against elite-level opposition.

What he'll bring to Brighton

Montoya is a typical modern full-back. His touch, technique and passing are what you would expect from someone schooled in the Barça way from a young age and impressed going forward for Valencia last season, notching four assists in 25 appearances. Montoya is comfortable in possession and always looks for runners ahead of him.

With Anthony Knockaert ahead of him, there is potential for an exciting new partnership to emerge on Brighton's right flank.

His pace also makes him an asset on the counter-attack – which will almost certainly be a feature of Brighton's gameplan against United – and he has proven himself adept at finding strikers with accurate crossing (his assist for Rodrigo against Athletic Bilbao last season was a perfectly-executed chipped through ball over the defender's head).

While his attacking attributes appear to be sound, he will doubtless spend much of the early part of his Brighton career in his own half (the Seagulls face Liverpool, Tottenham Hotspur and Manchester City as well as United in four of their next six games).

And that's where Montoya has perhaps fallen short in the past. Deemed surplus to requirements at Barça, Montoya's defensive weaknesses were, at times, exposed in the white of Valencia. In the 4-1 defeat to Real Madrid in January, Montoya conceded two first-half penalties following fouls on Cristiano Ronaldo and Karim Benzema. 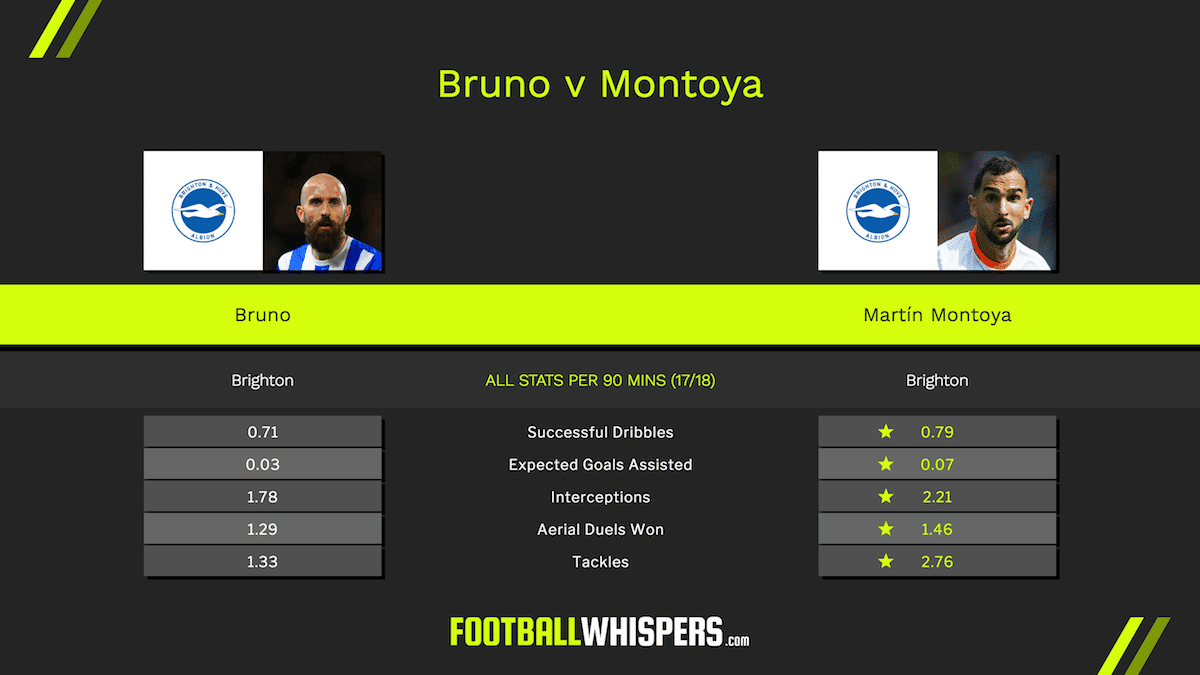 Two tricky opponents, admittedly, but both penalties were a result of Montoya's recklessness and that performance perhaps goes some way in explaining why Valencia were quick to sign Cristiano Piccini from Sporting Lisbon and make Montoya available for transfer. With Rúben Vezo as Piccin's competition, Valencia head coach Marcelino was happy to let Montoya leave.

However, he can breathe new life into his career in the Premier League. With Bruno as a mentor, someone who can ease him past the language barrier and guide him in defending against United (the veteran was exceptional when Brighton beat United 1-0 at the Amex in May), Montoya can be a hit on the south coast.

His defending will undergo a robust examination during Brighton's tough run in the coming weeks but, get a couple of solid performances under his belt early on and Montoya can start on the path to succeeding his much-loved compatriot in the Seagulls back-line.