Despite losing three of the first eight Ligue 1 fixtures, Monaco hopes to keep their resurgence going in round 9. The hosts are now unbeaten in four games while Bordeaux is unbeaten in the last three games. With that, we expect a tense encounter when these teams meet on Sunday 3rd October 20201.

Our Free Predictions for Monaco vs Bordeaux

The last meeting between these teams ended 3-0 in favour of Monaco away from home. But with both sides picking a good run in recent fixtures, it seems the result could go either way. After a comprehensive review of this game, we have narrowed down to the best three and bias-free predictions as follows:

These teams have struggled to keep a clean sheet since the new season kicked off. Monaco has no clean sheet after eight Ligue 1 matches. Bordeaux is also yet to record a clean sheet in as many matches. With that, we expect both teams to find the net on matchday.

We are tipping fewer than three goals when Monaco hosts Bordeaux on the third day of October. Despite their struggling defences, we expect a tough duel on matchday. These teams come to this match with an unbeaten run in the last four and three matches respectively. In the last 20 meetings, there were 9W for Monaco, 5D and 6W for Bordeaux.

Our final prediction for Monaco vs Bordeaux is a draw at full-time. While we believe Monaco has what it takes to win this game, they haven't proved a force to reckon, especially defensively. Both sides to score and fewer than three goals mean a correct score of 1-1 is a probable outcome in this match.

Monaco vs Bordeaux: Team History and the Best Betting Odds

Last season, Monaco bagged six points in two encounters with Bordeaux. And so, the big question for head coach, Niko Kovac, is can he repeat a similar feat this season? The biggest headache for Niko Kovac in this fixture is a shaky defence. While Monaco has kept two clean sheets in all competitions this season, they have been unable to do so in Ligue 1. The visitors look as though they will struggle to prevent Bordeaux from scoring even though they bagged two clean sheet wins last season. Bordeaux has lost once in four away matches while Monaco has lost twice at home in as many matches. A poor run at home makes Monaco vulnerable in this matchup even though they are a team that can put in a shift to get the desired result in fixtures like this one. 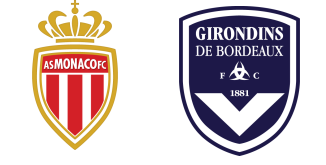 What time will this match start?

How have these teams performed against each other in the last five meetings?

There were 2W for Monaco, 2W for Bordeaux and 1D in the last five encounters.