Sunday’s result wasn’t a surprise. AS Monaco beating bottom of the table FC Lorient 4-0 to go two points clear at the top of Ligue 1.

That was their fifth win in six games, they have won 15 of 21 games and scored 64 times this season. That’s an average of over three goals per game and is now seven goals more than they scored in all of last season.

Monaco being top is not a shock either, ever since they won promotion to the top flight in 2014, they have established themselves as one of the best teams behind champions Paris Saint-Germain.

What has been a revelation this term is how Monaco have gone about their excellent season. Transforming from the safety-first side that reached the UEFA Champions League quarter-finals under Leonardo Jardim, to this free-flowing, counter-attacking, dominant side.

To look at how this has come about, we have to go back to that team that Jardim built. James Rodriguez had moved on to Real Madrid, Radamel Falcao joined Manchester United on loan and to the outsiders, it looked like a failed project.

“There are two ways to go,” the Monaco vice-president Vadim Vasilyev told The Guardian in 2014. “One is either you invest a lot of money and do it quickly, the other is you build up an intelligent project and you have to base yourself on your academy and sound principles of working and scouting well and basically that’s what we’ve decided to do. 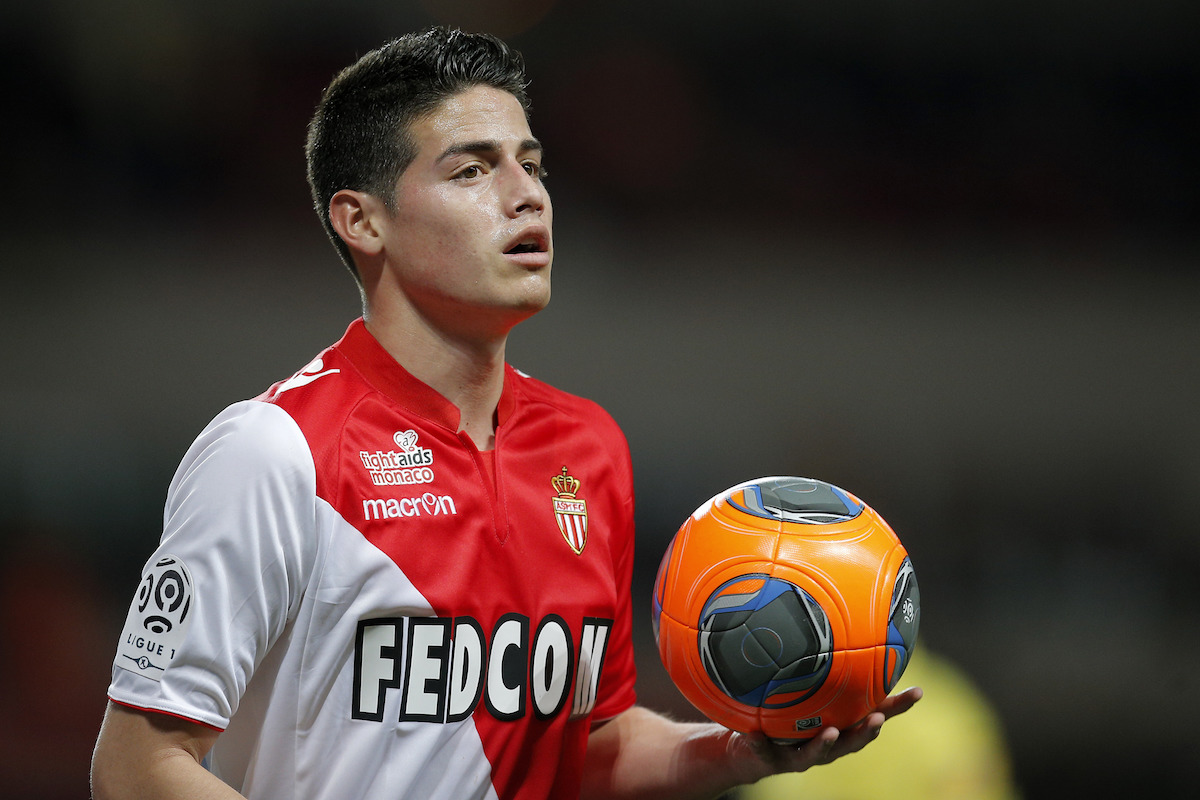 Jardim’s 4-2-3-1 was used to solidify their position. It wasn’t always attractive, but it was effective. The Portuguese boss started 25 different players over the length of the campaign, with 15 playing over 1000 minutes.

With Ricardo Carvalho, Andrea Raggi, Joao Moutinho and Jeremy Toulalan, they had experience and strength, but no real attacking pace.

Anthony Martial’s seven goals in the last 10 games of the season made him joint top-scorer with Bernardo Silva on nine goals. They scored 51 in Ligue 1, but conceded just 26.

Toulalan averaged 3.5 tackles, 3.6 clearances and 2.3 interceptions. Kondogbia had 3.1 tackles and 2.5 interceptions. They kept it tight and tried to hit on the break when they could. Creatively, they weren’t great, with Joao Moutinho on 1.9 key passes per game leading the team.

Last season, Monaco were worse. They may have scored 57, but they conceded 50, just under double the previous year.

It was a team in transition. Kondogbia, Carrasco and others left, Jardim started 30 different players and couldn’t quite decide on his best team.

Toulalan and Moutinho still patrolled the midfield, but several different players took the No.10 position, but the deadline day sale of Martial messed up their plans.

Monaco were not planning on selling the France international, but Manchester United’s offer was too good to be true. Guido Carrillo, Stephan El-Shaarawy, Lacina Traore and Vagner Love all played as the lone centre-forward. None of them convinced and with five goals, no striker scored more than Carrillo.

They faced Tottenham Hotspur in the Europa League and there’s no better way to see how this team has changed than to look at that game and the clash at Wembley this season. 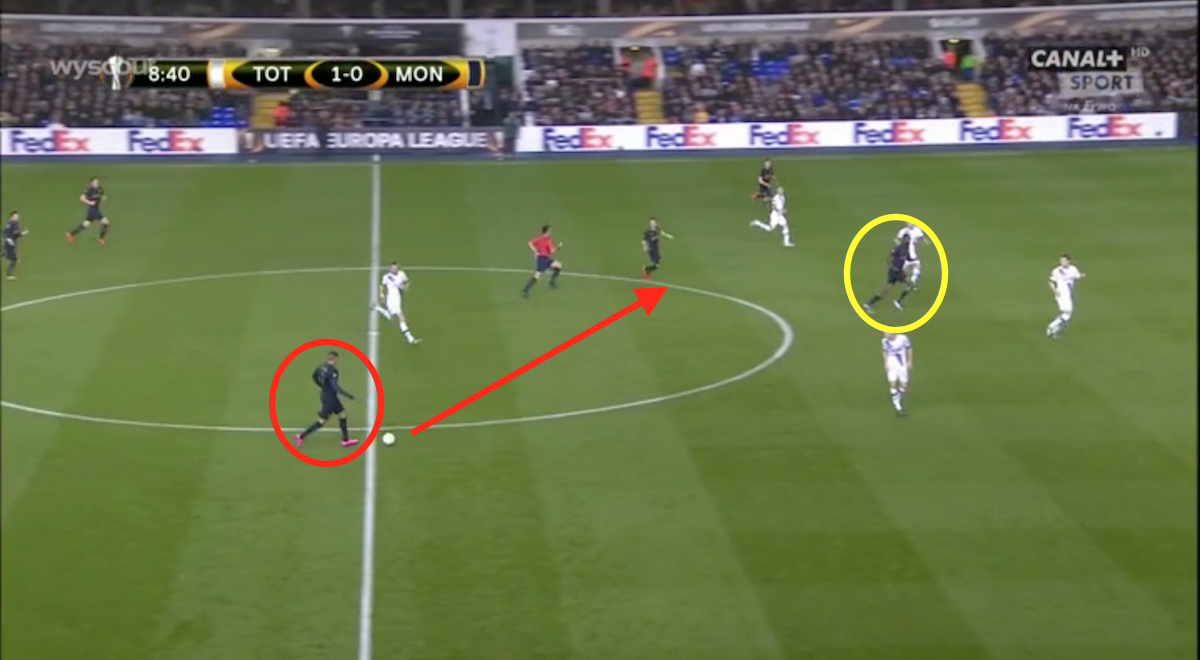 Up front, Traore (yellow), doesn’t have the movement to stretch the defence. Nabil Dirar (red) has no real options in front of him. Playing at right-back, he has no one coming outside him. The short ball to Silva was the only pass.

Dirar keeps running through the centre and the attack comes to nothing. Playing without Harry Kane and Dele Alli, Spurs won 4-1.

Jardim has worked hard to regain the defensive strength. Each player knows his role and where he needs to be. Even with Falcao back, the attack works hard to press and reduce squeeze. They pressure Spurs, win the ball and transition into the counter. 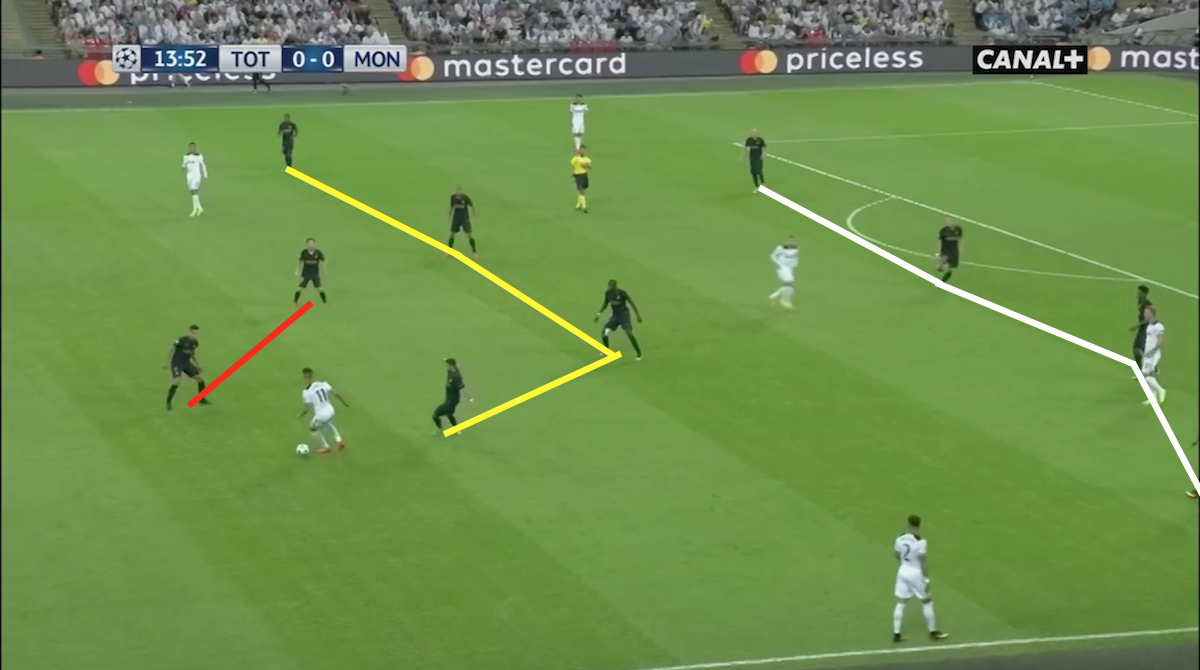 This time Monaco have options. Falcao makes space, the midfield run into areas they can pick up the ball and the attack in numbers. 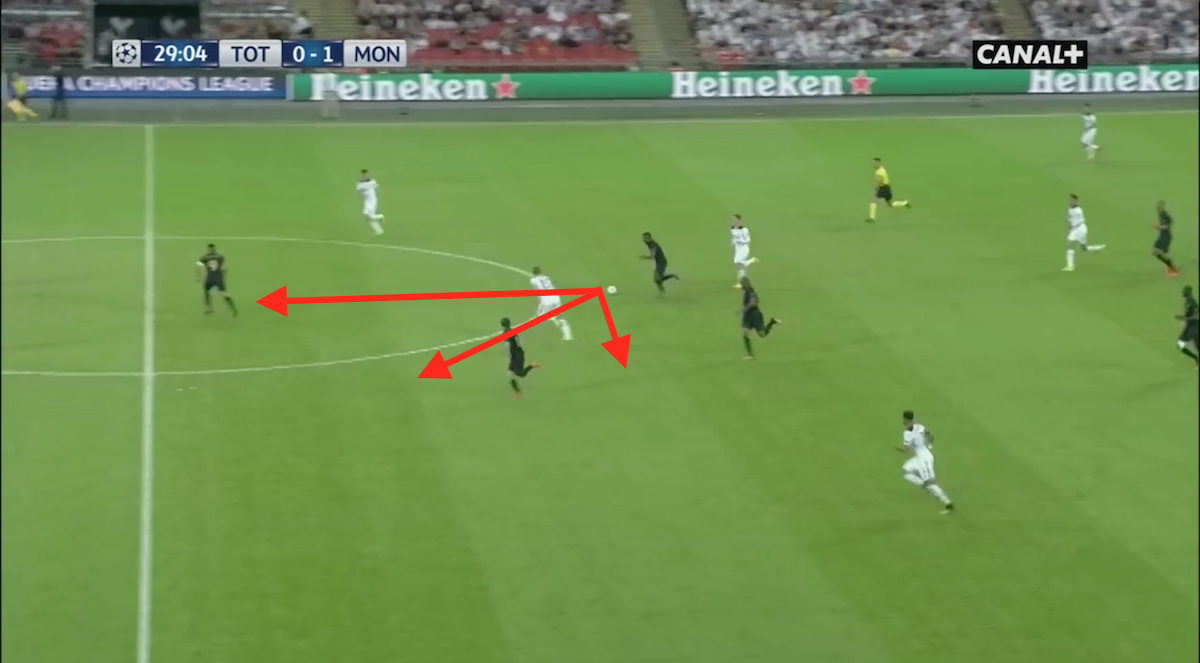 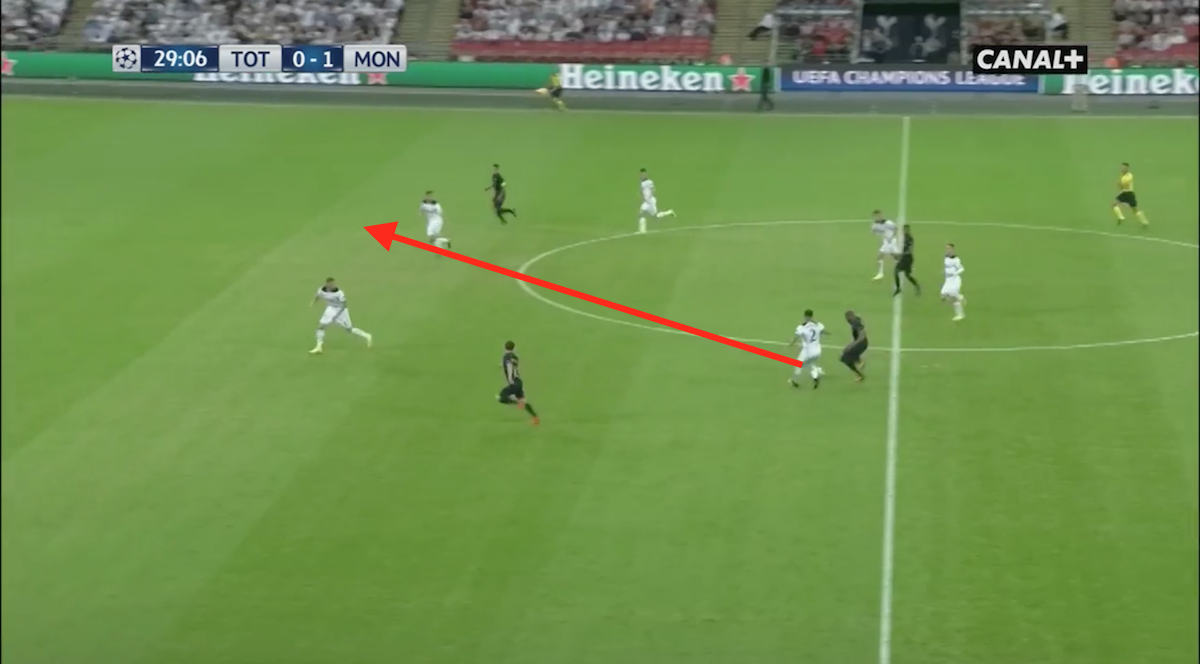 Sidibe tries the ambitious pass to pick up Falcao’s run, but it doesn’t come off. This is just one of a few examples and as the rest of Ligue 1 have discovered, if Premier League defences can’t keep them out, they stand little chance.

Playing 4-4-2 suits all Jardim’s options. Falcao, say what you want about how he’s not the player he used to be, but he works hard for the team, is excellent at holding the ball up and can still finish.

Bernardo Silva and Thomas Lemar play wide and love to cut inside, this gives space for Benjamin Mendy and Djibril Sidibe space to bomb forward from full-back. Fabinho, a former right-back, loves to attack too, so you can have at least seven players willing to carry the counter-attack, that’s too many options to try and stop when they are all in-sync. 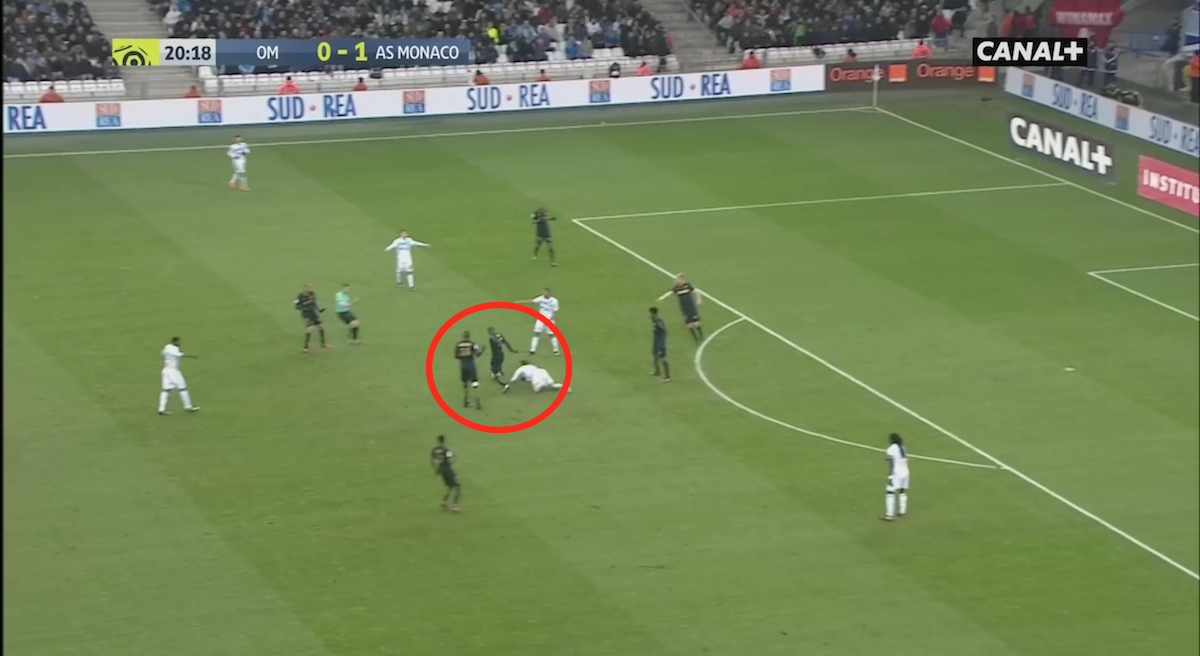 Against Marseille in the recent 4-1 win, you see they win the ball deep in their own half. With several players comfortable with running with the ball, they are quickly sprinting the other way. 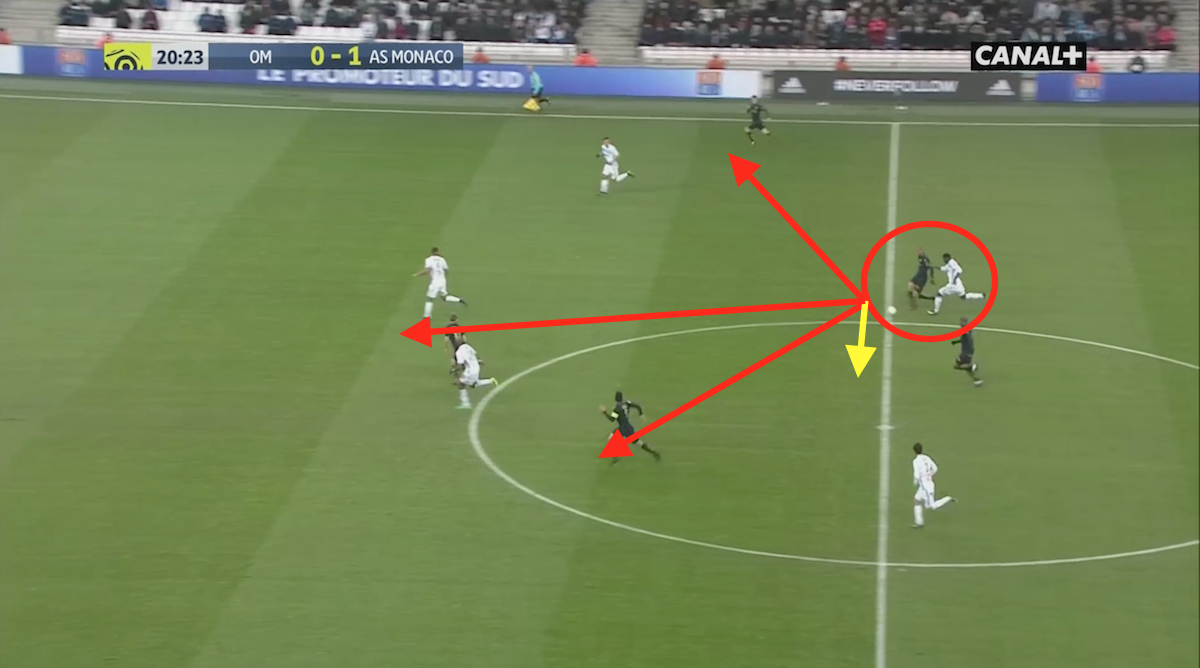 Fabinho brings it forward and he has a number of options ahead of him. He knows that the excellent Tiemoue Bakayoko will hold his position defensively – that’s why he’s a transfer target for Chelsea and Manchester United – so there’s no pressure on him to give it away quickly.

He picks to slip it back to Sidibe (yellow) and he picks up a beautiful ball to Falcao, and the Colombian makes it 2-0.

Monaco have become the perfect blend of defensive solidity with a desire to attack. They have the movement and intelligence to play the possession game and keep the ball, but against bigger and supposedly, better teams, they will look to hit on the break.

Monaco build for the future

One strength they have that many Ligue 1 teams don’t, is options off the bench. Carrillo has seven goals this season, Moutinho has experience, then 18-year-old Kylian Mbappe is a world class talent with three goals and eight assists. He can play up front or out wide and has scouts from across Europe drooling.

Brazilian Gabriel Boschilia has scored six goals from just four starts. Almamy Toure looks like a potential heir to Lilian Thuram’s right-back crown in the national team. Even if they lose a couple of players, like Bernardo Silva’s alleged £70million move to Manchester United, they have players learning the system that will be ready to take over.

When they have the scouts that can pick up Thomas Lemar for €4million from SM Caen, you trust them to build for the future.

They can do it all. With PSG’s failings this season, this is the best chance they will have to win Ligue 1, before the Parisians go big in the transfer market again. However, with the spirit and organisation that Jardim and the Monegasque team have built, if they can continue to sell and recycle talent, there’s no limit in what this group could achieve.