Moise Kean's emergence has been both rapid and unmissable.

The Juventus striker has never been too far away from the headlines. In November 2016, he became the first player born in the 2000s to feature in Serie A.

On the final day of the 2016/17 season, with Juve having already wrapped up their sixth successive Scudetto a week prior, he scored his first goal for the Bianconeri.

Unsurprisingly, given his tender years and the depth of talent in Massimiliano Allegri's squad, he was loaned to Hellas Verona that summer and January 2018 was particularly interesting for the young striker. He emulated fellow upstart Pietro Pellegri in scoring a Serie A brace amid rumours that he'd emerged as a Leeds United transfer target.

Suffice to say, Kean (pronounced Ken) didn't fancy the move to West Yorkshire and continued with Verona before returning to his parent club.

In football, patience is as important as talent for young players on the cusp of breaking through at a major club. And Kean certainly had to exercise a lot of that during the first half of the current campaign.

By the time the winter break rolled around, the teenager had been given just 14 minutes of action by Allegri (12 in the Champions League vs Young Boys and two in the league defeat of Fiorentina).

Desperate for first-team action, there was talk, again, of a possible move away from Turin. His agent, Mino Raiola, was said to have explored the possibility of engineering a switch to Milan.

As speculation swirled, Juve's No.18 didn't lose sight of what matters most: professionalism.

“Here at Juventus, I understand that work pays off,” he said in November. “So every day I try to give my best, trying to do well everywhere the manager decides to make me play. I remember well my debut in A, the sensations of that day remain unforgettable, as well as that of the first goal against Bologna.”

The forward was rewarded for his hard work in training. In a nice cyclical development, he was afforded the opportunity to stake his claim for a regular starting place in the Coppa Italia against Bologna, the side against whom he announced his arrival. Kean delivered, poking home his side's second goal to seal a 2-0 win.

It was somewhat fortuitous, with the striker having missed the ball when trying to connect with Federico Bernardeschi's pass before pouncing on Douglas Costa's deflected effort. But the point was he was there to pounce.

Eager to impress, his touch wasn't always refined but there was no faulting his enthusiasm or constant movement across the frontline. And there was no luck about his finish, a guided toe-poke into the far corner.

With a taste for it, patience was required once more, with Allegri keeping him out of the line-up until March 8. His form since then, however, has thrust him to the forefront of Allegri's thinking.

A brace against Udinese – a poacher's goal and a fine solo effort – was followed by scoring his first goals for Italy, helping the Azzurri to Euro 2020 qualifier wins over Finland and Liechtenstein.

And he's caught fire since the international break, scoring in four out of his last five appearances.

His late winner against Milan stole the headlines for the right reasons but his strike in the win at Cagliari was sadly overshadowed by the 19-year-old suffering racist abuse by the home fans inside the Sardegna Arena. 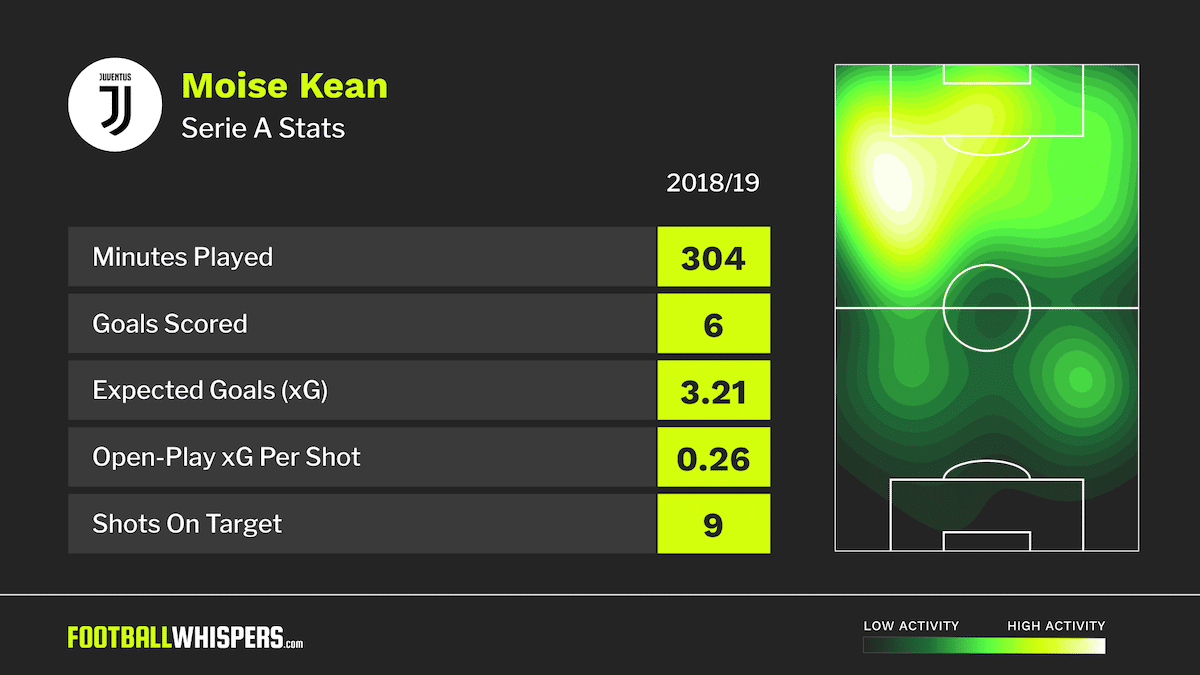 Subjected to chants throughout the game, Kean confronted Cagliari supporters behind the goal by celebrating with his arms spread in front of them.

After the game, he posted an image of himself celebrating. “The best way to respond to racism,” the caption read.

And while that incident further highlighted racism in football, Kean has continued to do his talking on the pitch. He downed Milan four days later and opened the scoring in Juve's shock defeat at SPAL on Saturday.

He is a classic example of succeeding by playing to your strengths. Although he has pace and can beat defenders, he is not the most technically gifted player in Juve's ranks. Instead, a lot of his game is based on instinct and quick thinking.

Always switched on, he profits from knowing where the ball may drop (see his goal v Empoli) and thrives when having a split-second to make his mind up.

Against Milan, he knew he'd only be allowed one touch inside the box. But it was all he needed. He killed the pace on Miralem Pjanić's pass and rifled his shot beyond Pepe Reina. This speed of thought and sureness of strike has resulted in six goals from nine shots on target, an exceptional return.

Kean is showing remarkable promise at such a young age. He understands the nuances of playing up top and has enough in his locker to become a regular fixture in the Juve line-up.

Indeed, with six goals in his last seven appearances for club and country, he's launched himself into the reckoning at the Allianz Stadium.

Italy supporters are right to be excited. Along with Patrick Cutrone, Nicolò Barella, Nicolò Zaniolo and Federico Chiesa, he represents the future of the Azzurri.

Juventus fans can be just as happy, though. Already kings of Italian football, their most exciting prospect is blossoming into a fine young striker.