Mohamed Salah was supposed to be a one-season wonder. His record-breaking 2017/18 campaign a one-off.

On Friday, however, he scored for Liverpool in their opening match of the season for the third successive year. In the process, he took his tally to 55 Premier League goals in 75 appearances.

Not a bad record for a Chelsea reject.

Despite only having two starts under his belt prior to the match against Norwich City, Salah was in devilishly good nick and finished expertly in the first half to double the Reds' lead.

The Liverpool No.11 looked in rampant form against Manchester City in the Community Shield but was profligate, wasting 11 chances for Reds. A wrong he righted at Anfield against the Canaries.

Unlike when he faced off against the Premier League champions, Salah didn’t have copious amounts of chances against Daniel Farke’s side.

In fact, he had just two shots on the night.

The first arrived after 18 minutes when the Egyptian latched onto a clever Roberto Firmino pass to guide the ball past Tim Krul.

It looked an easy finish but it was far from it. Salah was under pressure, the goalkeeper was rushing out and he didn't have a lot of space. And yet the Egyptian winger's touch positioned the ball exactly where he needed it and his finish was sharp, into the corner in a blink of the eye.

Salah's second effort was just after half-time. Fabinho caught a Norwich player dawdling in possession just outside his own penalty area. The ball bounced to Salah who raced into the penalty area and looked to curl the ball into Krul’s far corner.

From one camera angle, it appeared as though the former Roma star had weighted it perfectly and it was arrowing into the bottom corner. Sadly, however, it was just wide.

Two efforts against a newly-promoted side in what was largely a walkover doesn’t paint Salah in the best light. But his game is more than goals; they’re just the icing on the cake.

The 27-year-old can be a creative force. Able to unlock defences and fashion chances. And on Friday night, Salah was the man pulling the strings behind the scenes.

He finished with an assist to his name after putting in the corner for Virgil van Dijk to emphatically power home.

The Liverpool No.11 also assisted two shots in open play. Had it not been for last-gasp interventions that figure would’ve doubled, as would his assist tally. 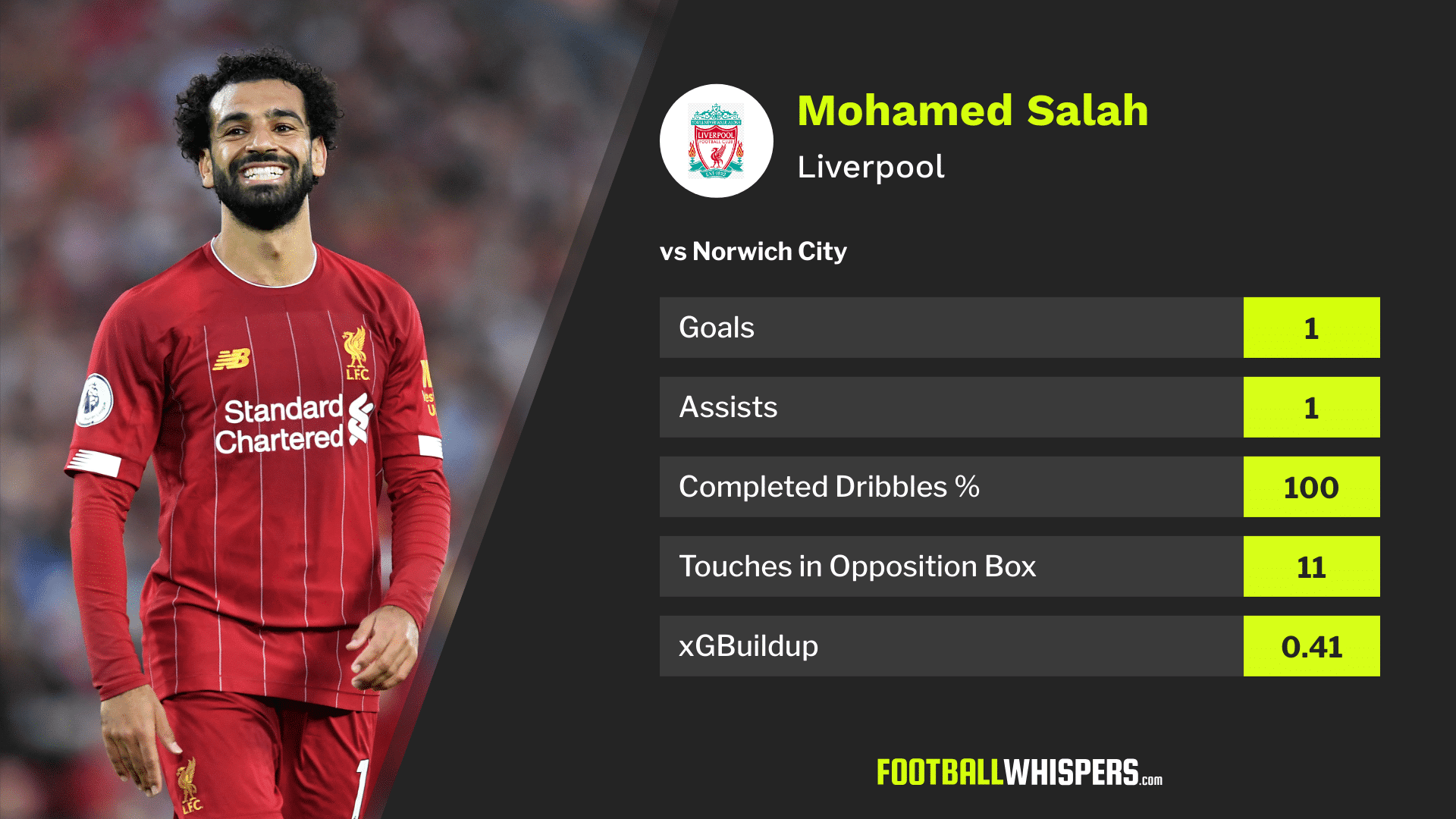 This is a small sample size and it would be premature to read too much into the numbers, but Salah the creator went under the radar against Norwich.

He may have overperformed his expected assist number of 0.27 but that average is par for his Liverpool career.

The real talking point was his xGChain total. This stat gives an expected goals value for every possession the player is involved in throughout the 90 minutes. During his first season with the Reds, he averaged an xGChain total of 1.08 which then dropped to 0.87 last year. Against Norwich, it was back up at 1.07.

Furthermore, his xGBuildup, which gives an expected goals value for every possession but minus shots and key passes, was 0.41. For context, his Liverpool average per 90 is 0.20. Again, this is a tiny sample size, just the 90 minutes, but encouraging nonetheless.

The left-footed maestro also completed 100 per cent of his dribbles against Farke's side and had an impressive 11 touches in the penalty area. A constant menace throughout, the latter stat shows just how involved he was in the final third with his Liverpool average in the Premier League prior to the game being 8.8 touches in the box per 90.

All of the signs suggest Salah is set for yet another rampant season in front of goal. Tougher challenges are on the horizon but it's worth remembering the Reds still have players to return, players who create more space for Salah to exploit in Naby Keïta, Sadio Mané and Alex Oxlade-Chamberlain.

Salah is comfortably one of the worst one-season wonders ever.