With less than a month to go until the big kick-off of MLS’s 21st season, we take a look back at the most important signings to come from the first two decades of the franchise.

Unlike the ill-fated NASL of the 1970s, MLS has grown from humble beginnings to one of world football’s most watched divisions. Here are the 10 greatest signings that have made it the franchise we know and love today:

The summer of 2010 was an important time for the continued growth of MLS’s appeal both in America and on a global front, and New York Red Bulls led the way in garnering worldwide attention thanks to a number of notable signings; none more so than the arrival of Thierry Henry from Barcelona.

At 33, the former Arsenal legend still had plenty to give on the pitch. While his quality couldn’t spearhead the Red Bulls to an MLS Cup victory, the Frenchman’s individual brilliance was rewarded with four MLS All-Star appearances. Perhaps more importantly, the combination of star attraction and quality on the pitch was tremendously beneficial for the league as a whole.

Moreover, transforming a New York-based team into a serious contender for titles could only ever positive impact too.

Long before the influx of arrivals from the European leagues, D.C United made headline news in the summer of 1996 by securing the services of Bolivian striker Jaime Moreno from Premier League side Middlesbrough.

During his time in MLS, split over two spells with D.C and an interluding stint at the New York MetroStars, Moreno became the first player to hit both 100 goals and 100 assists in the league. This cemented his place in the MLS history books and makes him one of the division’s first superstars.

Over half a decade since retiring from the game, Moreno is still on D.C’s books, in a youth coaching capacity.

It would be impossible to write a piece on MLS without mentioning the young pretender. At just 14,  D.C United made him the first selection of the 2004 MLS SuperDraft, instantly propelling Adu into the global spotlight.

Adu’s career could have hardly started any better as he contributed to D.C’s MLS Cup triumph in his first season. Continued promise was soon rewarded with a call-up to the US national team while comparisons to Pele and other legendary players soon emerged. Sadly, things soon tailed off.

Despite a rapid decline, which now sees a 26-year-old midfielder ply his trade in NASL, there is no question that the name Freddy Adu was responsible for huge fanfare during the mid 2000s.

The arrival of veteran European idols isn’t exactly a rarity in modern day MLS. Nonetheless, the announcement of David Villa as New York City FC’s first ever signing signals a huge moment in the league’s history.

Aside from his contributions in Spain’s most dominant era, Villa had helped Atletico Madrid to an unlikely Liga title just weeks before committing his future to the new MLS franchise. More importantly, it signalled the birth of a huge city rivalry in New York. With the Big Apple being one of the most iconic locations on the planet, this can only have positive impact on the league’s overall attraction; both domestically and on an international front.

New York City FC have since added the duo of Frank Lampard and Andrea Pirlo to their roster. Nevertheless, it was Villa’s arrival that put the club on the map. On the pitch, his form earned a 2015 All-Star inclusion too.

As far as North American footballers are concerned, Dwayne De Rosario is easily one of the most highly regarded. The attacking midfielder is Canada’s all-time leading scorer and sits seventh in MLS scoring history too. But it was nearly so very different.

De Rosario had started his professional career with stints in Australia and Germany before starting what would become a 16-year stay in MLS with a 1999 switch to Richmond Kickers. The Canadian would enjoy productive spells at San Jose, Houston Dynamo, Toronto FC, New York Red Bulls and D.C United before hanging up his club boots at the end of 2014. His final career outing would bring a goal against Iceland in January 2015.

The Canadian’s star quality easily merits a place on the list of most important transfers.

Throughout a long a successful career, Robbie Keane has often cited playing for a new club as a dream. However, when he joined LA Galaxy in the summer of 2011, it was the MLS franchise that found themselves on cloud nine. In fairness to the Republic of Ireland skipper he’s kept them their ever since.

At 31, Keane was still a sought after marksman in England at the time of his arrival, which made him a huge coup for the Galaxy and soccer in the States as a whole. The Irishman has been a star performer at the StubHub Centre ever since, firing his club to three MLS Cup triumphs in just four years in California.

Furthermore, his influence has helped recruit the likes of Steven Gerrard and Ashley Cole to the club while also opening up the potential of the league to compatriots Kevin Doyle and Sean St Ledger.

The second Bolivian on our list is Marco Etcheverry, who, like Moreno, joined D.C United ahead of the division’s inaugural campaign. The dominating midfielder would play a huge role as the club clinched three of the first four MLS Cup titles; he was also named MVP in the one season where he missed out.

In 2005, he was honoured in the league’s All-Time Best XI. More importantly, though, he was the catalyst in growing MLS’s domestic and global appeal beyond the first season. Unlike other stars in that inaugural campaign, such as MVP Carlos Valderama, Etcheverry would display his quality for eight full seasons, notching over 100 assists in the process.

Quite frankly, he’s an absolute giant in the early history of the league. 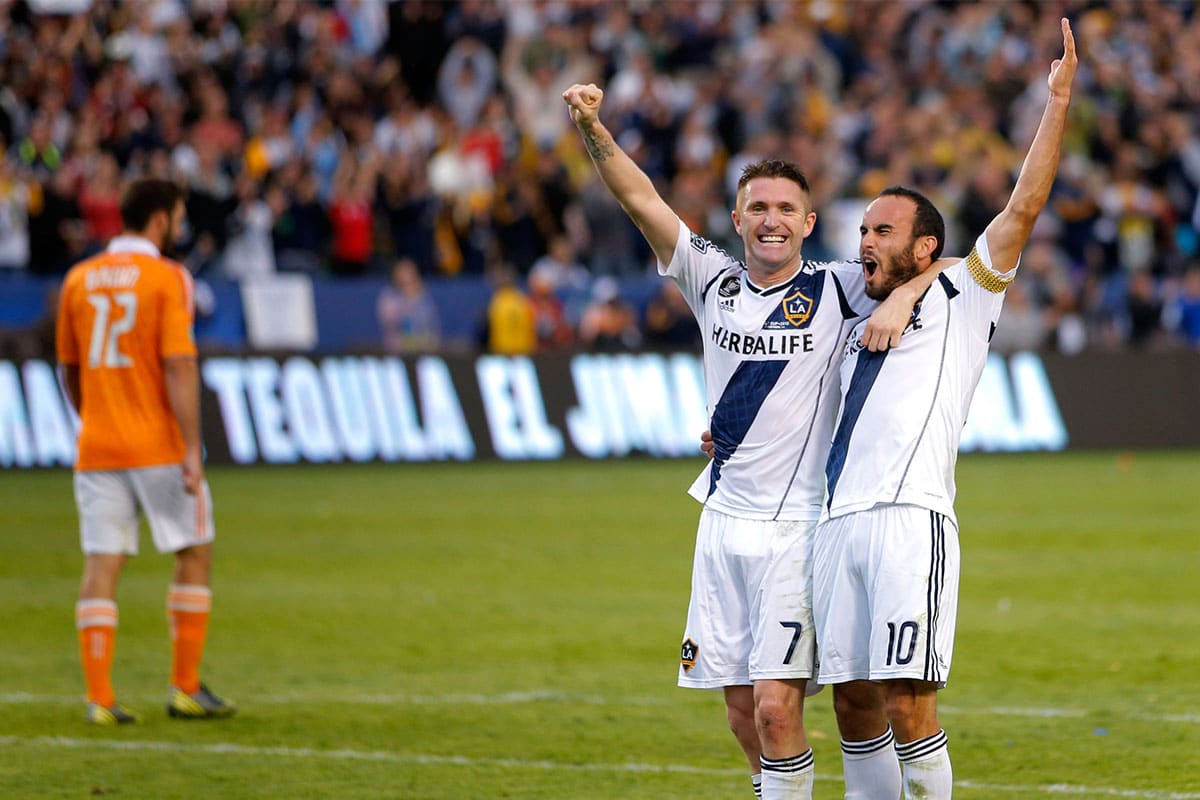 Sometimes, the biggest challenge in football isn’t attracting players; it’s keeping them. When Landon Donovan returned home to California to join LA Galaxy in 2005, following an extended loan spell at San Jose from Bundesliga club Bayer Leverkusen, he instantly became the poster boy for the league. The fact he remained loyal to the Galactics in spite of intense battles for his signature only worked wonders for validating the quality of the division, especially to its American-based fanbase.

Donovan was already a star name long before his return to California thanks to his incredible performances at the 2002 FIFA World Cup. His permanent role at the Galaxy made him a key fixture in the league’s appeal for both USMNT supporters. This would later extend to the European followers as both Bayern Munich and Everton benefitted from his talent, albeit on short loan spells during the MLS off season.

The midfielder became a multi-time MLS All-Star representative and helped the Galaxy to a haul of four MLS Cup victories. Donovan also leads the all-time scoring and assists charts with over 100 in both. He is a legend of American soccer, and will always be heralded as one of the league’s most important signings.

MLS clubs have been no stranger to buying great players that are arguably past their best, but it’s a real coo when a big name joins in his prime. In 2015, the most exciting transfer came in the form of Sebastian Giovinco’s switch from Juventus to Toronto FC.

The then 28-year-old could have picked any club from a long list of potential suitors, and his decision to join the Canadian outfit certainly raised a few eyebrows. The Italian arrived with a huge weight of expectation on his shoulder, but a return of 22 goals in his maiden campaign only further confirmed his quality in the final third.

In future years, we could look back at Giovinco’s transfer to MLS as the turning point for encouraging international giants to arrive in North America whilst still in their prime. Regardless of whether he continues his form in the coming campaign, he will always be one of the most noteworthy signings that the division has ever witnessed.

Was there ever any doubt about who would be No.1?

David Beckham’s Hollywood move in the summer of 2007 was everything the league needed at this time. After a decade of existence, the MLS franchise required a star attraction that could thrust the division’s popularity through the roof while still being young enough to perform at the very top level. A 31-year-old Goldenballs was a gift sent from heaven.

The former England captain wasn’t only a superstar in terms of football; his attraction transcended the sport, finally helping MLS reach out to the masses. Two MLS Cup victories and quality individual displays, including iconic goals from his own half as well as his trademark set-pieces, ensured that Beckham achieved what the likes of Pele couldn’t in the old NASL. Meanwhile, his presence has since encouraged a list of European superstars to head Stateside for one final hoorah.

Beckham’s contribution to the league has continued into his post-playing career thanks to his commitments with the forthcoming Miami franchise. MLS’s most important signing by a landslide.