MK Dons are on a terrific run of form at the moment with four wins from four; three of those have come at home and they'll be confident of making it five consecutive wins when they welcome a bang average Crewe side to Stadium MK. Crewe, who are just three points behind their hosts in the table, are in a poor run away from home. They've managed just one win in their last five and that was against lowly Northampton. Where head-to-head matches are concerned, they've only beat MK Dons once in five attempts on the road. Throw in the fact Crewe faced a tough battle with Hull on Friday whilst MK Dons have had a few days off after their cancelled fixture and they should have the edge.

Both of these are sitting pretty in mid-table; that should mean they can go out an play a free flowing game of football. The sides also measure up well for this game to contain plenty of goals too. Six of MK Dons last home games have seen the 2.5 goals mark broken with their season average sitting at 2.8. Crewe's average for the campaign sits on the threshold at 2.5 with half of their last 10 finishing with three of more goals.

Cameron Jerome might be getting on in years but he still knows where the goal is. He's the Dons top scorer this season with 13 strikes to his name. Included in that tally is three from his last four. With his last two matches seeing him fail to score, it's time he finds the shooting boots again; given he has three in three at home the visit of Crewe could be exactly what the doctor ordered.

All the stats and odds for MK Dons vs Crewe

MK Dons to make it five on the bounce

MK Dons and Crewe are two of just a handful of sides where their season has effectively ended already; neither has any chance of dropping into League Two whilst the playoffs are out of sight as well. Of course, neither manager will want their campaign to coast to an end with momentum into summer having the ability to set up next season to be a real positive one. The form of the sides combined with the lack of pressure means this could be an interesting watch; equally it could have a pre-season feel to it.

FAQ about MK Dons vs Crewe 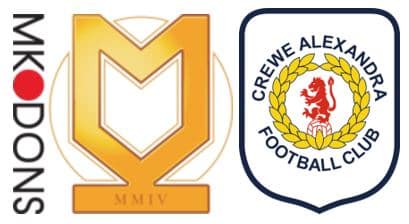