Aleksandar Mitrović's loan spell at Fulham was one of the success stories of last season.

Marginalised at Newcastle United, the temperamental Serb moved to Craven Cottage in January and proceeded to score 12 times in 17 Championship games to help the Cottagers finish third and secure promotion to the Premier League through the play-offs.

The 24-year-old's performances persuaded free-spending Fulham to pay £22million for his signature, potentially rising to £27million.

And Mitrović quickly put paid to any concerns that he was unable to replicate such potency in the top flight, with five goals in the first six games lifting him to 17 since his debut in February, more than any other player in English league football during that period.

Since then, however, the goals have dried up, having failed to score in each of his last seven appearances.

Finding the net has been no problem for the former Anderlecht forward. He has done so with impressive regularity throughout his first year at Fulham but he now faces the first genuine test of his mettle.

During his purple patch in August and September, he was one of the most clinical finishers in the Premier League. Nobody scored more open-play goals during that period, while his expected goals (xG) of 2.95 was enough to rank him sixth. Since then, his xG has dropped significantly to 0.8.

Further to that, the Serb's open-play post-shot xG – a measure of finishing quality – was sitting at 3.58 before decreasing to 0.38. He was always going to be starved of service away to Liverpool (in Sunday's defeat at Anfield, he lost possession more than any other player, lost seven aerial duels and managed just one shot on target), he drew blanks against Huddersfield Town, Bournemouth and Cardiff City. 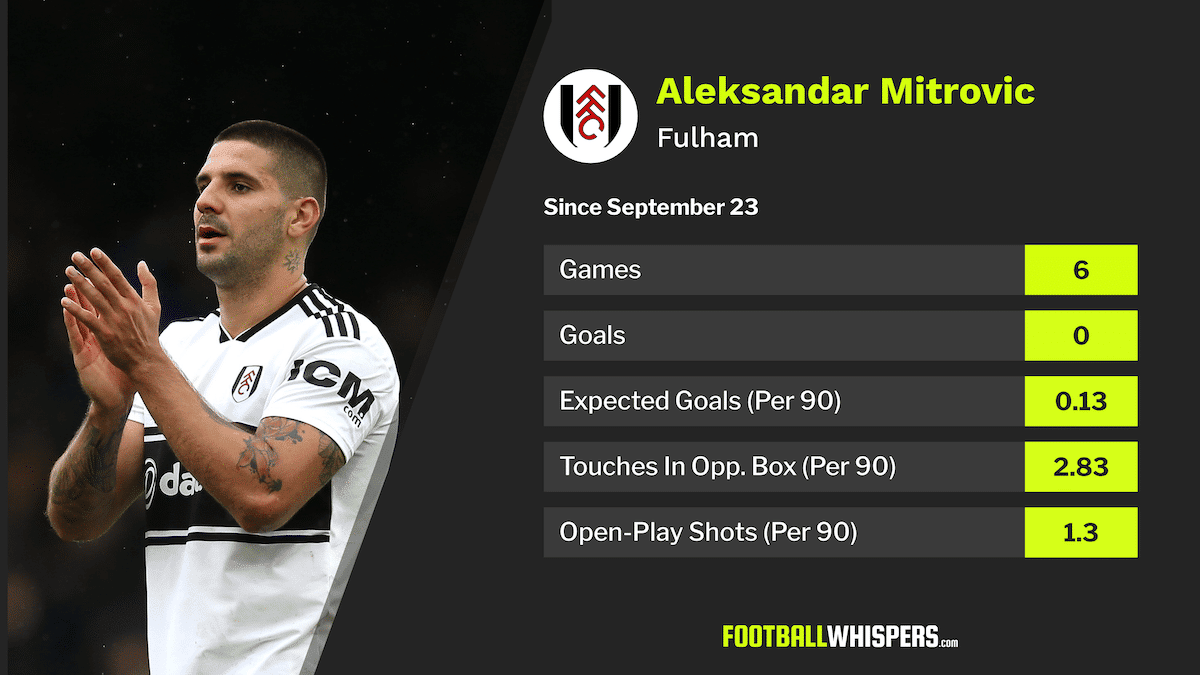 There has been much debate over whether his disallowed goal at Anfield should have stood but the Serb's subsequent anonymity in the second half spoke volumes of his shattered confidence. That Mohamed Salah ran up the other end and scored just 13 seconds after being flagged for offside perfectly encapsulated Mitrović's current plight.

It's interesting, too, that Mitrović's style has changed dramatically recently. As Football Whispers' Player Persona comparison shows below, his radar was dominated by goalscoring, on-target shots and missed shots between March and September. Since then, however, Mitrović's game has been overwhelmingly shaped by aerial play, perhaps reflecting how Fulham have often sought to use their forward as a target man.

The data appears to reflect such a change in approach. During his fruitful period, Mitrović was averaging 5.2 touches in the opponent's penalty area per 90 while managing 17 shots from open play. However, during his barren run, those figures have dropped to 2.83 and eight, while the amount of aerial duels he has won has increased from 3.0 to 5.5 per 90.

Of course, the striking department is not an area in which manager Slaviša Jokanović is overly blessed. The most obvious replacement is Aboubakar Kamara, who hasn't scored since January, while Luciano Vietto and André Schürrle have been primarily deployed in wide areas.

If Fulham's under-fire boss is unwilling to experiment, Mitrović will remain at the head of Fulham's attack. And that means the pressure to recapture his previous form will be as intense as ever.