It would seem the default position for football fans these days, apart from an unhealthy fascination with undeserved Champions League qualification, is to bemoan the lack of local, home-grown talent in their ranks. You know, just like the old days when all players lived within a stone’s throw of the ground and turned up to training on the number 72 bus with their boots draped around their necks.

Of course, as we know, quite often this never actually happened at all, yet that doesn’t stop those who love the game, not to mention those who have only really got around to following football, scrutinising the birth certificates of players while yearning for an era that didn’t really exist.

It might just be a clever way of deflecting attention from some pretty pitiful performances by the team despite spending £250 million in the transfer market, but it often appears that some Manchester United fans are more interested in how many Salford lads made the starting line-up than how the team actually performed on the pitch.

Obviously the “Class of ’92,” which United fans rightfully hark back to, was a magnificent period for the club but with the exception of perhaps the Busby Babes era in the late 1950s and early 1960s, this was still something of an anomaly in the history of the club.

As for their great rivals down the M62, the departure of club legends Steven Gerrard and Jamie Carragher has left Liverpool bereft of Scouse heroes for the local crowd to worship since the beginning of time if you are to believe what you read. Indeed, when the Reds played Everton last year the press was full of the fact that this was the first time that a Liverpool-born lad had not featured in a Liverpool side in Premier league history.

Okay, a surprising fact maybe and a good piece of sporting trivia if nothing else, but amidst all the recent uproar what many fans seem to forget is, the period of Liverpool’s most recent successes actually came about during a time when the number of locals in their side was at an all time low.

And anyone who watched Manchester United throughout the 1970s and ‘80s would never be able to doubt the passion and commitment shown by players whose only knowledge of Manchester probably came from watching Coronation Street.

So when the two sides met in the FA Cup semi-final at Goodison Park in April 1985, did you hear the fans complaining that their squad was low on local talent? Were the papers full of stories of how clubs were neglecting home-grown players in favour of those from further afield? Did it make for a game that was lacking in fight, passion and raw animosity? Not a bit of it.

The Manchester United team that day did not feature one player born in Manchester yet, ironically, did feature a Scouser in the form of John Gidman, not to mention their Liverpool born manager Ron Atkinson. For Liverpool Sammy Lee was their only locally born representative. 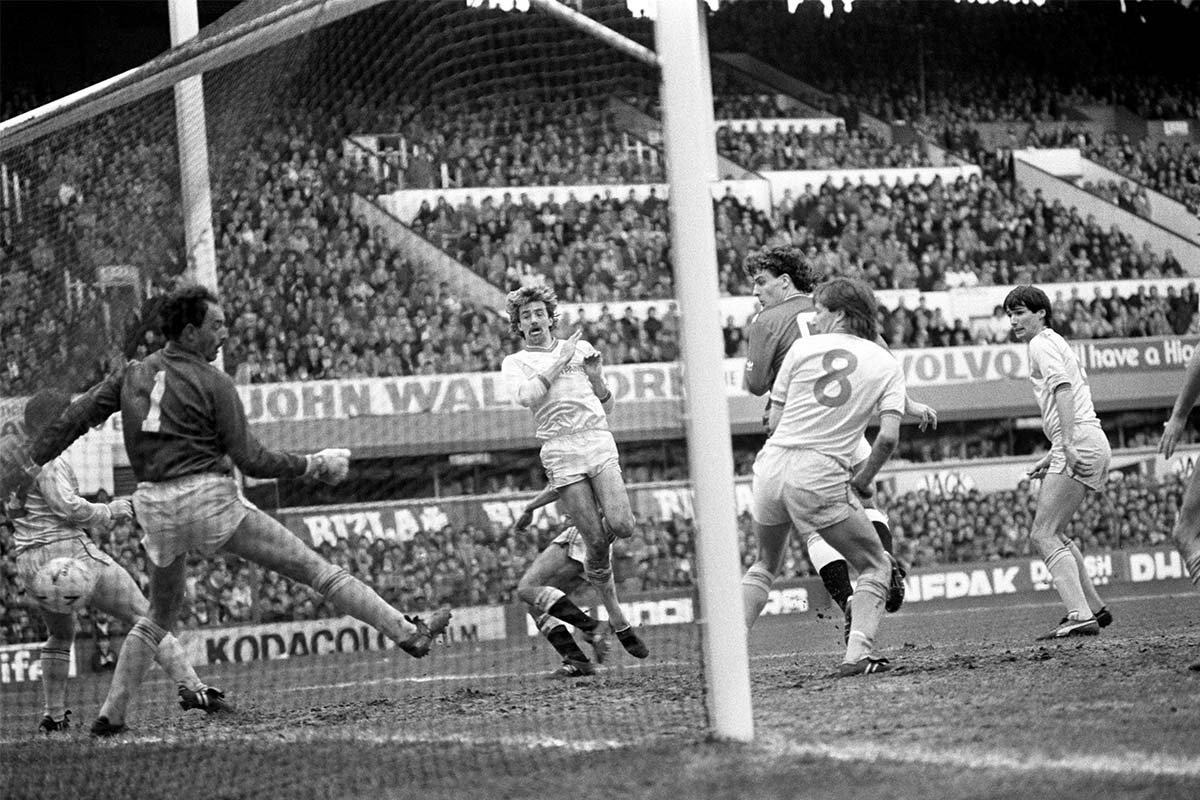 United’s eleven consisted a back-four which included two Scotsmen, an Irishman and the previously mentioned Gidman. While their midfield and attack was made up from a collection of talented internationals like Denmark’s Jesper Olsen with England skipper Bryan Robson being the only real “local,” having been born some 135 miles away in County Durham.

Liverpool born Sammy Lee found himself in a side that day in which he was not just the only Scouser, but one of only a handful of Englishmen. In fact, 12 months later, when Liverpool faced Everton in the FA Cup final and with Mark Lawrenson playing for Republic of Ireland, the team didn't feature any English players – the first time that had happened in the history of the FA Cup tournament.

Prior to the match the large number of players who represented their respective nations had threatened to be something of a hindrance as two key international fixtures took place slap bang in the middle of the business end of what had been a draining campaign for both clubs.

Both sides had also been involved in European action going into the match with United going out of the UEFA Cup on penalties to Hungarian side Videoton, while Liverpool all but booked their place in the European Cup final by demolishing Panathinaikos 4-0 in the first leg of the semi-final at Anfield.

United still harboured slim hopes in the race for the title, although a defeat against Sheffield Wednesday would pretty much end their hopes of a first league crown since 1967 while Liverpool were out of contention in the league, their recent 1-0 loss at home to United ending any remaining chance of a fourth successive title.

But regardless of the amount of meaningful games leading up to this semi-final the notion of “squad rotation” or bringing in inexperienced youngsters was still some years off. The players that took to the pitch that day were pretty much the very same players who had featured since August, not that you would have known if you were watching that day.

Despite Liverpool’s dominance at the time it had been 11 years since they had lifted the famous old trophy and United were something of a bogie side for the Merseysiders going into the game winning only twice against United in the previous 20 meetings – something would have to give.

After a cagey first-half United captain Bryan Robson finally broke the deadlock in the 69th minute, arriving late at the far post to force home a corner with the aid of a deflection off his own striker Mark Hughes as United fans celebrated as though they were already in the final. And with Mark Hughes and Frank Stapleton causing Liverpool all kinds of problems, and Paul McGrath expertly keeping Ian Rush at-bay, nobody could blame them. 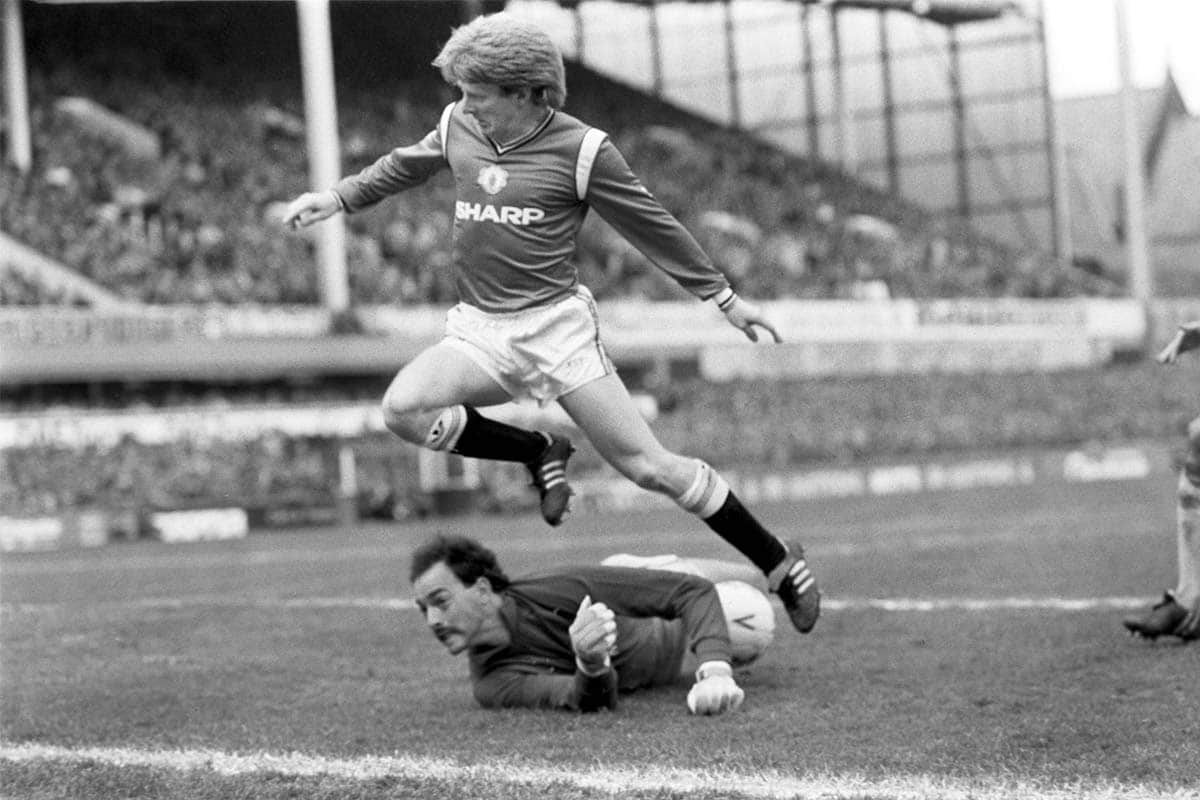 However, with just three minutes remaining Ronnie Whelan found himself with some room on the edge of the United box and curled a beautiful 20 shot right into the top corner in a goal reminiscent of his effort in the 1983 League Cup final, also against United. Liverpool had been given a reprieve and would go into extra-time on the front foot.

The first period of extra time started off where the previous 90 had finished and at a frantic pace, with both sides looking to make the most of a further 30 minutes, despite the obvious fatigue following such a busy schedule, but United made more of the running with Stapleton's speculative effort from 20 yards deflecting past Bruce Grobbelaar in the Liverpool goal and leaving the Irishman looking more surprised than delighted, United were in front once more.

But after twice climbing to the top of the cliff United were to have their fingers stamped on in the most agonising way. As Kevin MacDonald puntedthe ball forward as United fans begged for the final whislte to be blown, the linesman clearly had his flag raised for an offside decision, but referee George Courtney played on as Dalglish robbed Gordon Strachan to swing in a cross; and after Bailey brilliantly saved Rush's header all  Paul Walsh had to do was escort the ball over the line.

Ron Atkinson came off the bench to protest, pointing at the linesman in hope more than expectation as Liverpool players and supporters were delirious. It felt as if United had lost their best chance of reaching Wembley, having come so close on two separate occasions as a replay was now a certainty.

Liverpool knew they had been lucky, even manager Joe Fagan admitted: “We didn't really deserve what we got. When they went 2-1 ahead in the first half of extra-time I felt we could all go home, so I am very thankful we have got another crack at it.” The two would face each other a matter of days later and this time at Maine Road, home of Manchester City at the time as everyone prepared to do it all over again. 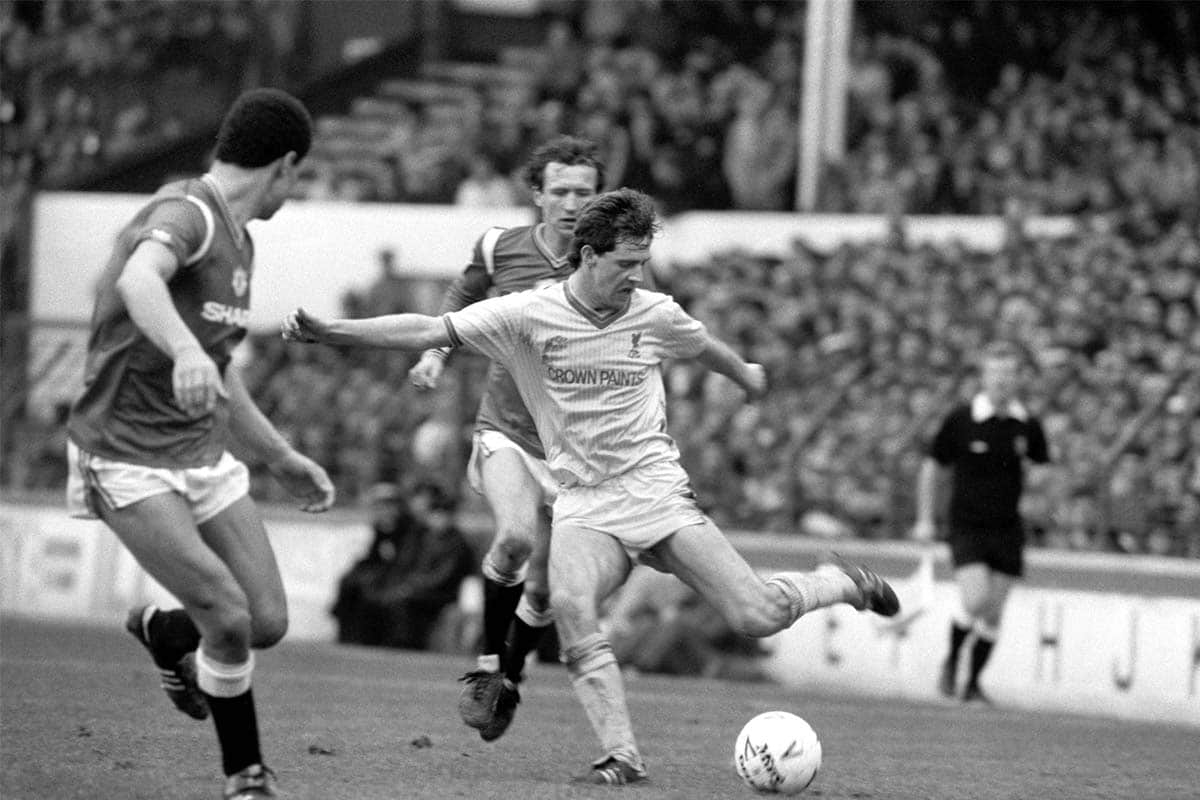 The replay saw Ian Rush ruled out with a hamstring injury, though such was his poor record against United, this wasn’t necessarily the huge blow that many thought it would be and when McGrath put through his own goal in the first half it seemed that United’s failure to twice finish the job last time would be their downfall, especially when Steve Nicol missed a great chance to make it two.

Not for the first time it would be United’s “local” hero and Captain Marvel Bryan Robson who would pull his side back from the brink. Picking up a Stapleton pass just inside Liverpool's half, Robson motored past Lawrenson as only he could before smashing an unstoppable 25-yard drive past Grobbelaar that was just typical of the man.

If the atmosphere at Goodison Park had been electric, then Maine Road on that Wednesday night was on another level as both sets of players were now surrounded by four walls of deafening noise provided by two of the most vibrant and passionate sets of supporters in the land.

In the 59th minute Mark Hughes received the ball some 35 yards from Liverpool’s goal before bearing down on Bruce Grobbelaar who couldn’t prevent the ball from squirming past him and into the back of the net. The goal was hotly contested by Liverpool, who felt Hughes was offside, but as in the first game, play was allowed to continue and United found themselves in the final of the FA Cup for the second time in three seasons.

“A raw embodiment of the best British football has to offer”, was how Steve Curry from the Express described it at the time and those who watched both games knew they had witnessed something special.  This was English football played at its very best by a collection of the game’s finest who didn’t grow up round the corner from the club they represented but players who originated from all over;  Scotland to South Africa, Dublin to Denmark, proving once again – it’s not where you’re from, it’s where you’re at. 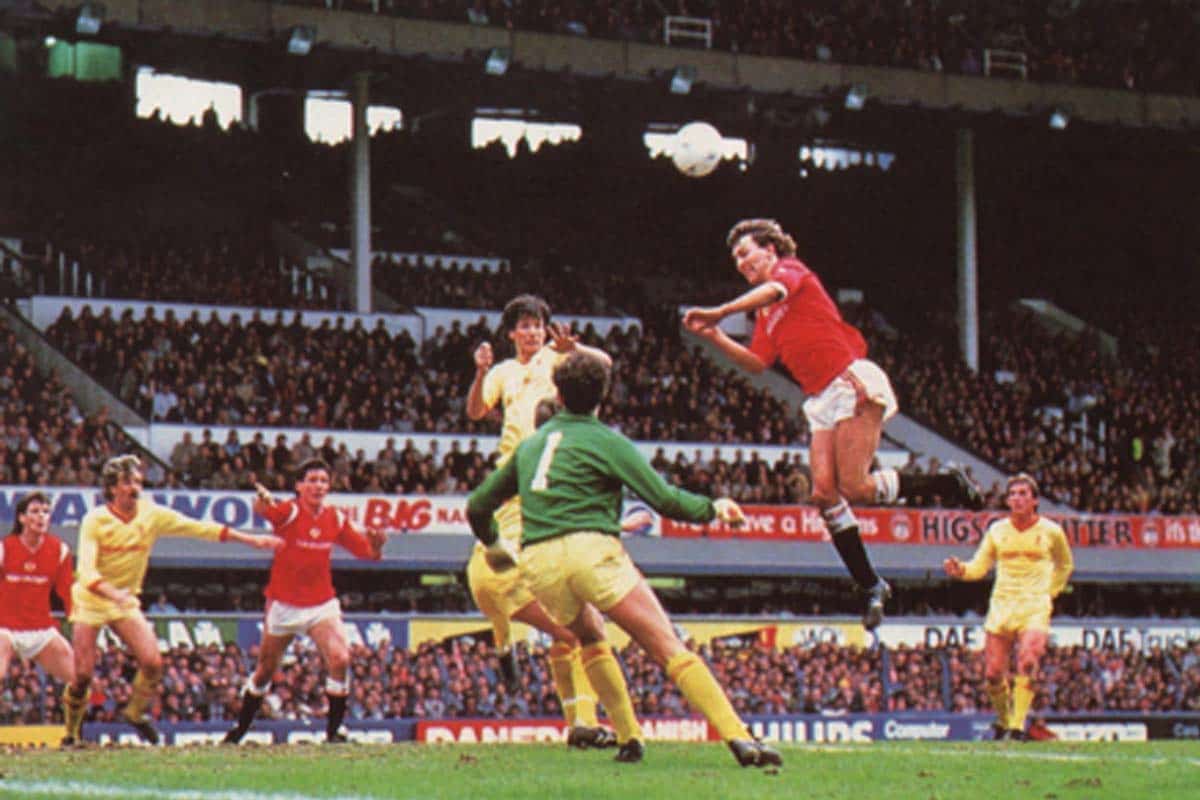