Manchester United could not have asked for a much more positive start to their 2017/18 season. A convincing 3-0 win over Basel kicked off their Champions League campaign in style, while in the Premier League they have dropped just two points – in a draw away to Stoke City – from a possible 15.

Sitting joint-top of the table with local rivals Manchester City, José Mourinho’s side look equipped for a serious title challenge. And a number of new signings have played a key role in the upturn, with Romelu Lukaku scoring regularly and Nemanja Matić patrolling the midfield.

Their summer transfer window was a success on the basis of what has transpired so far, but that doesn’t stop them from being linked to further additions. The latest Manchester United transfer target is young Italian Mirko Antonucci.

According to Transfermarketweb, the 18-year-old is on United’s radar after impressing at youth level for Roma. He is, however, interesting other clubs. Previously, he has been the subject of Liverpool transfer rumours, while presently he is reportedly also interesting AC Milan, Inter Milan, and Lazio.

Here Football Whispers give the lowdown on Antonucci and consider whether a move to Manchester United would work out for all parties.

Roma are a club with a proud history of producing exceptionally gifted players. Their academy has been responsible for some of the finest Italian footballing talent in recent years, with the most recent examples being Alessandro Florenzi and Lorenzo Pellegrini.

Both players are important members of the current first team and act as an inspiration to those coming through the youth system. At 26 years of age, the former already has over 150 league appearances and is the club’s vice-captain. The latter, at just 21 years old, has already represented Italy at senior international level.

Both Florenzi and Pellegrini are following in illustrious footsteps. In the 1930s and ‘40s, Amedeo Amadei, a local boy who made his debut at 15 years of age, came to be known as ‘the eighth King of Rome’ thanks to his displays for the Giallorossi.

Giuseppe Giannini was a fringe squad member during that season, but he went on to gain the adoration of the Roma fans in years to come. A classy playmaker, he made over 300 appearances in all competitions before being succeeded as local hero and club icon by someone who worshipped him as a boy.

Francesco Totti had posters of Giannini on his wall as a budding footballer, and he took on his idol’s mantle in the mid-1990s. He took the No.10 shirt, the captaincy and playmaking responsibilities, and wowed the supporters for over two decades. He never left the club he supported as a child.

Totti retired at the end of last season, leaving room for new home-grown hero to take his place in Roma’s attack. Unfortunately, his boots will be almost impossible to fill. But Antonucci had demonstrated enough potential to suggest he could make it at the highest level. 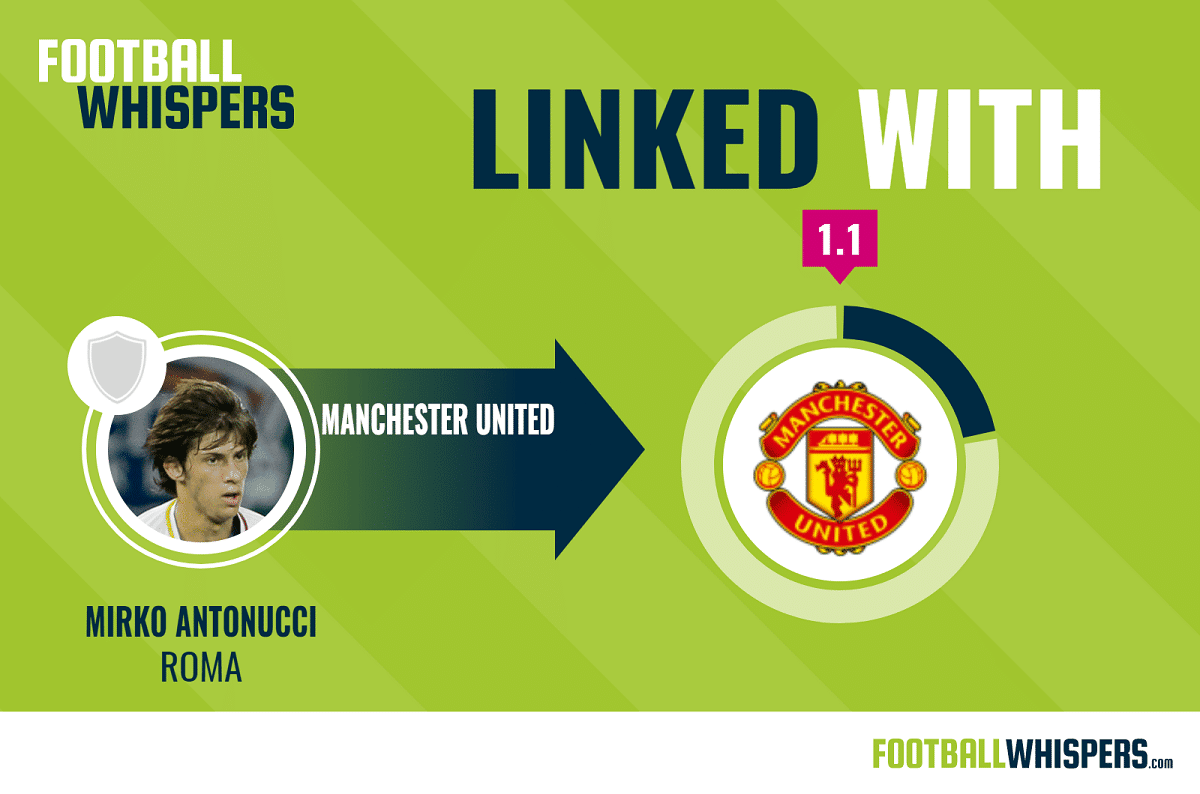 Born in Rome on 11 March 1999, Antonucci has yet to make his debut for the Roma first team. However, with injuries to several key players such as Radja Nainggolan and Patrik Schick, the youngster could have some involvement in tonight’s clash with Benevento.

He has featured on the bench before, for the Giallorossi’s 3-1 home defeat to Inter Milan in August, and will be aiming to make his debut at some stage this season. And he will no doubt be given opportunities if Eusebio Di Francesco’s track record is anything to go by.

The new Roma head coach worked wonders at Sassuolo, leading them into the Europa League while playing attractive, attack-minded football. He was also keen to blood young players, with the likes of Pellegrini, Domenico Berardi and former West Ham United man Simone Zaza all benefitting from his leadership.

Antonucci already appears to have alerted his boss. After the player picked up an injury that ruled him out of a pre-season fixture, Di Francesco admitted: “I would have liked to have seen Antonucci who unfortunately picked up a knock this morning.”

The 18-year-old’s performances at youth team level certainly seem suggestive of someone with the capacity to progress to first team level. After breaking into the Under-17 side at the end of the 2014/15 season, he shone at that level in 2015/16. Appearing primarily on the right wing, he scored a noteworthy 11 goals in 27 games.

Antonucci was subsequently promoted to the Primavera (under-19s), where he spent the whole of last term. While he didn’t play or score quite so frequently, he did find the net in a 5-0 thrashing of city rivals Lazio and help the side to the semi-finals of the Campionato Primavera.

Tactically, the player is able to operate effectively on either wing or behind the striker, although his preferred role appears to be on the left flank. From there he can cut inside onto his favoured right foot and take up dangerous positions in front of the opposition defence.

He shows good pace and acceleration, though his diminutive stature means he is not particularly strong or explosive. Instead, he relies on his technique and decision-making. This is a positive, as he will undoubtedly grow physically with time.

Antonucci enjoys one-on-one situations which allow him to showcase his technical ability, but he is a team player and a hard worker. He passes and crosses well, showing good understanding of when to release the ball, and does not seem averse to tracking back when necessary.

WOULD A MANCHESTER UNITED MOVE WORK OUT?

Leaving Roma at this stage of his career would be a risk for Antonucci. At 18 he is on the cusp of breaking through to the first team, and there is no guarantee that this would happen at Manchester United.

Currently, Mourinho has a number of outstanding attacking midfielders and wingers to utilise. Juan Mata and Henrikh Mkhitaryan are the first choices, while the likes of Jesse Lingard and Ashley Young provide experienced back-up.

Perahaps more worryingly for Antonucci, however, is that United have a wealth of young talent in his position.

At 21 years of age, Anthony Martial is developing into the club’s latest super-sub, while 19-year-old Marcus Rashford is the darling of the Old Trafford support. Throw in 17-year-old Angel Gomes, who made his debut last season, and the Italian would have serious competition on his hands.

It was widely reported that Mourinho wanted to add Inter Milan’s Ivan Perišić to his squad over the summer to bolster his attacking midfield options further, but the start his team have made to the season indicates that missing out on the Croatian was not a major issue.

With this in mind, signing Antonucci is unlikely to be seen as a priority.

Gianluca Di Marzio’s website recently reported that Roma are keen to tie their home-grown prospect to a new contract, and that may be the best move for the player. He is with a club renowned for its academy, and is working with a coach who has shown faith in youth before.

Right now a move may not make sense, but, assuming he continues his development, Antonucci may one day move away from the Italian capital. And, if and when he does, Manchester United could well come calling.