Premier League clubs love raiding the Bundesliga. With relatively low release clauses and a playing style that lends itself well to the English top-flight, it’s little wonder it’s a prime shopping destination for the very best England has to offer.

Since Jürgen Klopp’s arrival at Anfield, the Premier League leaders have recruited Joël Matip, Loris Karius and Naby Keïta from their manager's homeland. The European champions are also perpetually linked with Timo Werner, Jadon Sancho and Kai Havertz. In recent weeks, another Bundesliga player as appeared on their radar, according to reports in Sport Bild.

Werder Bremen’s Milot Rashica has emerged as a surprise target for the Reds. The Kosovo international has impressed since his switch from the Eredivisie in January 2018. The 23-year-old has 24 goal involvements in just 3,205 minutes of action, giving him a goal or an assist every 133 minutes.

The £6million fee paid by Die Grün-Weißen to acquire the versatile forward now looks like an incredibly shrewd investment. With a rumoured £31million release clause, the Bundesliga club are set for a big payday during the summer transfer window.

However, in the grand scheme of things, Rashica’s release clause is a drop in the ocean for a Premier League side. To be able to sign a player with 16 goals and eight assists in the equivalent of 35 90-minute matches for around the £30million mark is absurd value for money in the current market.

The scary part is he’s posting these numbers while turning out for a team in a relegation battle. Werder are one place off bottom having picked up just 17 points from 23 matches. They’ve lost nine of their last ten and have conceded the most goals in the Bundesliga.

It’s safe to say that without Rashica, Werder would likely be rooted to the bottom of the table. He’s had a hand in 40 per cent of their goals this season. In difficult circumstances, the former Vitesse man has shown he can deliver.

Rumoured to be an Aston Villa transfer target previously, the Werder No.7 has all the traits of a player who would be popping up on Liverpool sporting director Michael Edwards’ laptop.

The Reds have been linked with Kylian Mbappé and Sancho but all of the noise coming from journalists on the Liverpool beat recently has been that the Club World Cup champions won’t be breaking the bank to land players. 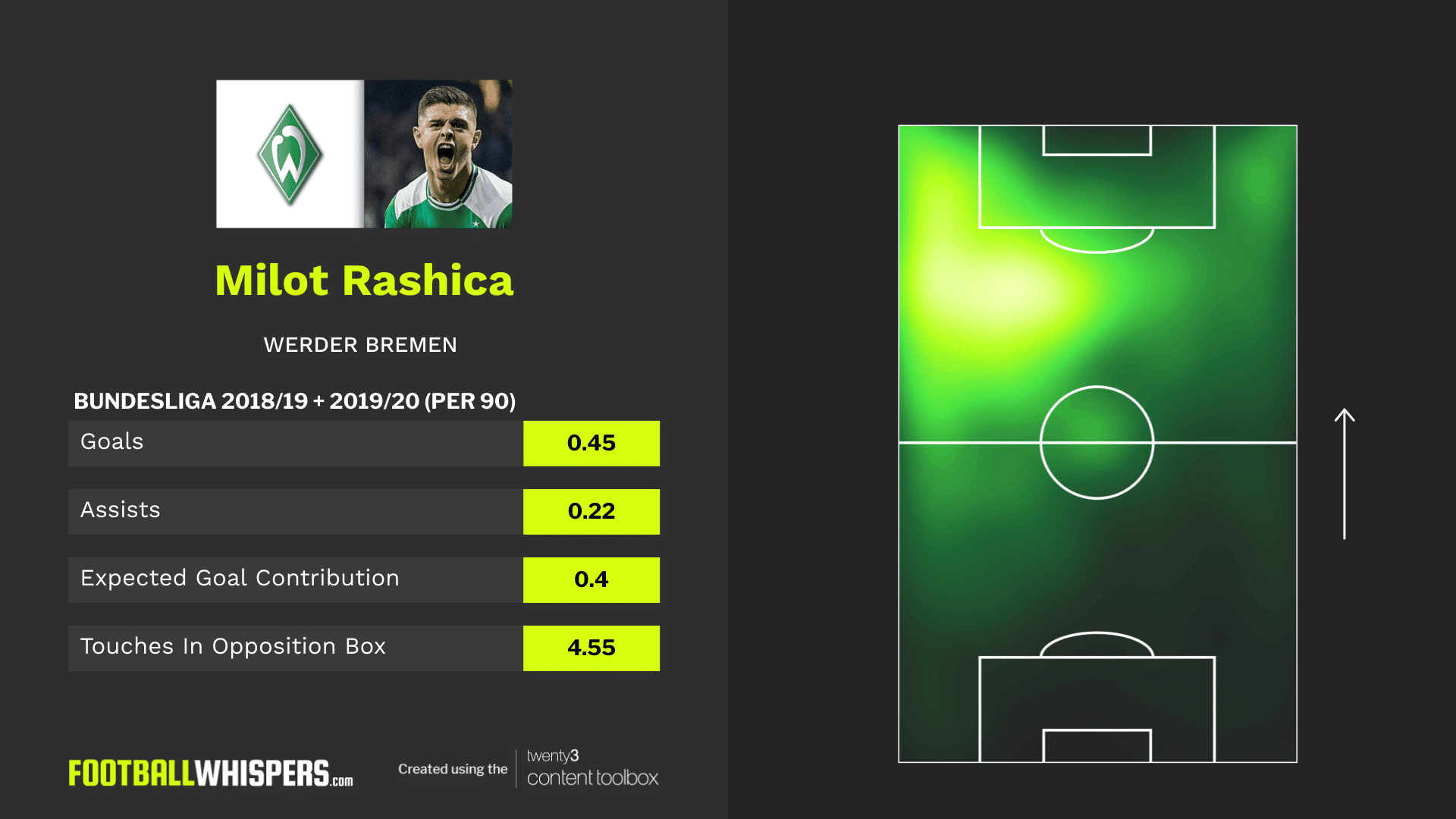 The Reds don't sign world-class stars, they create them. While Rashica isn't in the same sphere as Mbappé or Sancho, under the watchful eye of Klopp and his coaching team, he could develop into a rival. Perhaps not in terms of reputation but certainly in terms of being a productive wide forward.

He's spent just over a year with Werder now and, in that time, he's averaged 0.45 goals and 0.22 assists per 90. Rashica's open-play expected goals contribution comes in at 0.4, highlighting the fact he's overperforming. But this is over a 3,000-minute sample size, which shows he isn't just running hot.

These numbers are better than the averages posted by Sadio Mané before he made his £36million move to Merseyside in 2016. The Senegalese speedster managed 0.38 goals per 90 across two seasons at Southampton with 4.61 touches in the opposition's box. 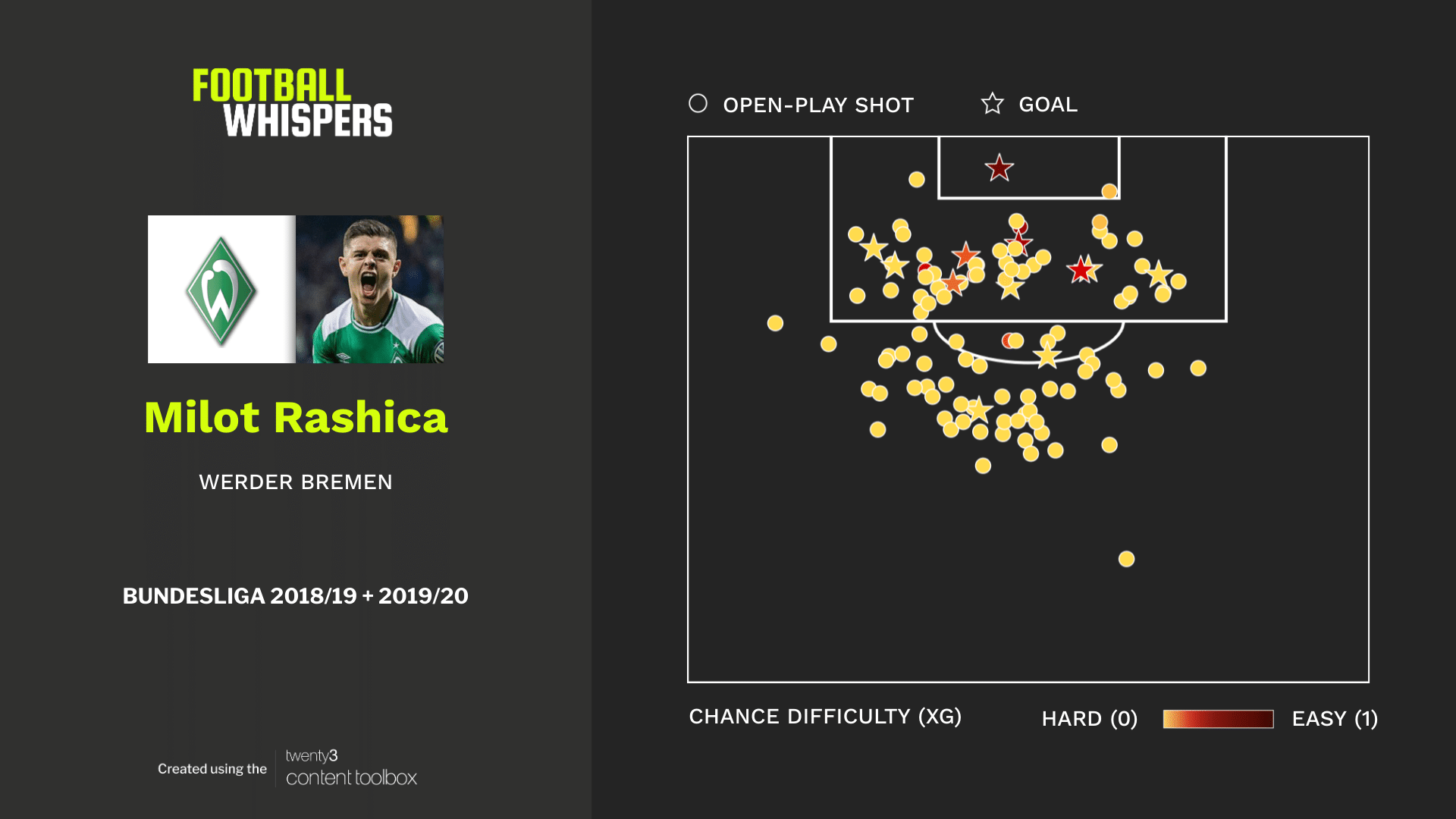 Furthermore, it is likely Rashica's averages will improve with experience. His shot map (above) shows he's still having efforts from distance. As basic as it sounds, the closer you are to goal the better your chances of scoring. If the 23-year-old adds patience to his skill set, he'll begin to look for opportunities to work the ball into the area before shooting and this should see his expected numbers rise and his actual numbers improve, too.

Right now there's plenty to work with. Not only is he a goal threat, he's also an effective ball-carrier, attempting 4.18 dribbles per 90 and completing 62 per cent of them. He's creative, assisting 1.71 shots per 90 while racking up an expected assist average of 0.17.

Rashica isn't a Mbappé or a Sancho. But he could be just as effective for the Reds in their current set-up and he's available for a fraction of a price. Liverpool need attacking reinforcements this summer and the 23-year-old ticks a number of their boxes. For £30million, it's an absolute no-brainer.