Millwall are still very much in the hunt for the top six. Can they bank another three points as Swansea visit? Find out with our Millwall vs Swansea match preview with free tips, predictions and odds mentioned along the way.

A double chance for Swansea

Swansea have no losses in their last three games, with two wins and a draw; they scored seven goals in that stretch, conceding just two times. On the other hand, we have a Millwall side that has struggled to win games recently; they have no wins in their last two games, and they've won just one of their last five games. It's worth noting that Millwall have found it difficult to beat Swansea in recent years; they are winless in their last four encounters with Swansea, and they've won just one of their last nine clashes. For this reason we believe that the Swans will take at least one point from this game.

Meetings between Millwall and Swansea have mostly been on the low-scoring side: four of their last six encounters went below the 2.5 goal mark, with three of those games going under 1.5. In the same vein, Millwall have had their fair share of low-scoring games; six of their last seven games went under 2.5. As a matter of fact, four of Millwall's last seven games went under 1.5, with a couple of those games ending goalless. Considering Swansea did not concede in their last two games, we're predicting a low-scoring game.

Here are the key stats & form guide for Millwall vs Swansea

Millwall vs Swansea: Let's look at the predicted lineups

Swansea's season has been a rather miserable one but their derby win at the weekend will see them arrive in London feeling confident of knocking the stuffing out of Millwall's playoff charge.

Millwall's form has gradually gotten worse in recent weeks; they have just one win in their last five games, with three draws and a loss. Prior to that poor five game stretch, Millwall were on a five match winning streak; they'll hope to get back to winning ways as they host Swansea.

Swansea are coming off a comfortable 4:0 win against fellow Welsh side Cardiff; they've had a good run recently, taking seven points from a possible nine in their last three games. Russell Martin's men will visit The Den on Tuesday; they'll look to extend their unbeaten run to four games.

A quickfire FAQ on Millwall vs Swansea 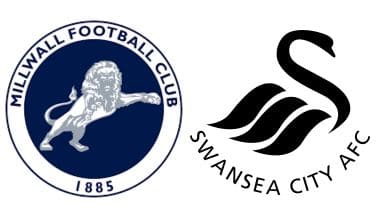